In recent years, there has been an active progress in neuroscience to investigate the cause of neurological diseases such as chronic pain and epilepsy. Understanding numerous neural networks in a brain is necessary for studying brain diseases and disorders. Various implantable wire electrode bundles have been used to simultaneously record neural signals at different brain regions with a goal to investigate functional connectivity among brain regions. However, these wire bundles are subject to various technical problems such as inaccurate positioning of wires, low electrode density and large brain tissue damage as reported in previous works [1]. To overcome these drawbacks, MEMS technology can be applied to neural probe due to their advantages [2, 3]. Since MEMS neural probes have various advantages such as small size with a high electrode density and capability to accurately position each electrode in an array structure, MEMS neural probe has attracted great attentions in the past decade. [4] Especially, accurate positioning of each electrode in an array structure is important for studying functional connectivity of brain. Furthermore, more functions have been merged into MEMS neural probes including various stimulation modalities such as optical and chemical [5]. Among MEMS neural probes, probes with optical stimulation capability has recently received much attention because genetically targeted neurons can be selectively excited or inhibited by light without stimulating neighboring neuron networks [6].

Previously reported MEMS neural probe for optical stimulation suffered from few limitations, such as thick probe shank and inaccurate positioning of manually attached optical fiber. In the previous work, we achieved a thin neural probe integrated with an optical waveguide but offered only two stimulation sites due to relatively high optical loss [7]. The low-loss optical waveguide, the key advantage of this process, utilizes a thick glass as the cladding layer based on glass reflow process to reduce optical transmission loss.

Fig. 1(a) shows the conceptual diagram and SEM image of the neural probe integrated with an optical waveguide. Iridium microelectrode array for recording signals from individual neurons and a waveguide for transmitting light are integrated in a single shank. The material for electrode is iridium and the sizes of each component are shown in Fig. 1(b). The neural probe consists of 16 microelectrodes and each electrode is connected to an external node through gold metal line. As shown in Fig. 2, size of metal microelectrodes is 14 × 14 μm2 and the thickness is 1500 Å. A 4000-Å-thick silicon dioxide layer is deposited using chemical vapor deposition (CVD) for passivation layer. 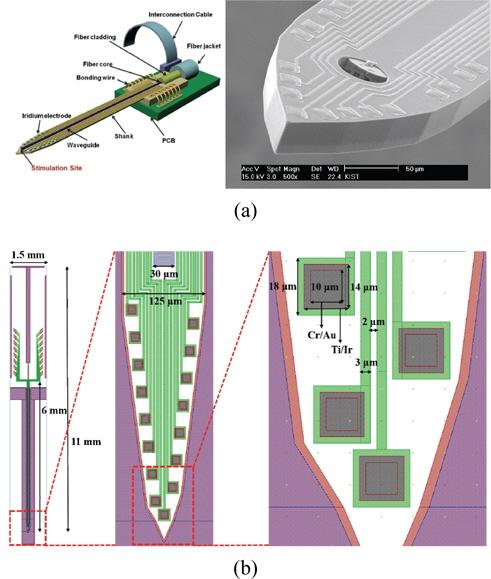 Fig. 1.MEMS neural probe with an optical waveguide: (a) conceptual diagram and SEM image and (b) size of metal pads and metal lines on the shank.

Material and dimensions of each layers used to form microelectrodes and signal lines are illustrated in Fig. 2.

Fig. 2.Materials and sizes of microelectrode and metal line of the neural probe.

When the fabricated neural probe is used to record neural signals, metal microelectrodes are immersed in an electrolyte (a conducting medium); then, electrochemical reactions occur at the interface between the solid microelectrodes and the electrolyte.

Since process variation affects the dimension of metal line in neural probe, metal line resistance (RL) from metal electrode interface to external node is added to the equivalent circuit model. In this work, we introduced a new equivalent circuit component, RL, which is in series connection with the traditional electrode equivalent model. Therefore, all of analysis in this work included variation of metal-line resistance, which results in more accurate prediction of electrode impedance than those of previous works. Each of passive components was extracted by equation or finite element simulation as expressed below.

Each element used in the model was obtained as follows to calculate the impedance of microelectrodes. Total interfacial capacitance CI is series combination of the Helmholtz capacitance (CH) and the Gouy-Chapman capacitance (CG) as shown in (1).

Helmholtz capacitance is determined by the total area of the interface (A), the dielectric permittivity of electrolyte (ɛ oɛ r), and the distance of the OHP (Outer Helmholtz Plane) from the metal electrode (dOHP) as shown in (2). Also, Gouy-Chapman capacitance is determined by two terms. The first term (ɛ oɛ r /LD) is simply the capacitance per unit area of two plates separated by a distance LD while the second term implies that the effects of mobile charges are compensated by the hyperbolic cosine. Here, z is the valence of the ion, Vo is the potential at the electrode and VT is the thermal voltage (kT/q).

Solution resistance (RS) considers the effects of the spreading of current from the localized electrode to a distant counter electrode in the electrolyte. Since neural probe in this work uses rectangular electrode, Rs is calculated with length l and width w.

The Warburg impedance is theoretically determined by the following equations shown in (5). This equation is based on the assumption that the electrode is operated near equilibrium and the diffusion is dominated by a single ion species.

where f is the frequency in Hertz, n0 is the bulk number concentration of ions in the electrolyte (ions/liter), D is the diffusion coefficient (cm2/sec) of the ion, and z is the valence of the ion.

The impedance of diffusion-related Warburg elements is summarized below:

Since the RL contains only resistance factor, it is independent from frequency variation and can be easily extracted by the finite element simulation as shown in Fig. 4. Although RL is smaller than other parameters, RL should be included to examine fabrication process variation of the neural probe. Influence of fabrication process variations on impedance will be explained in next section. 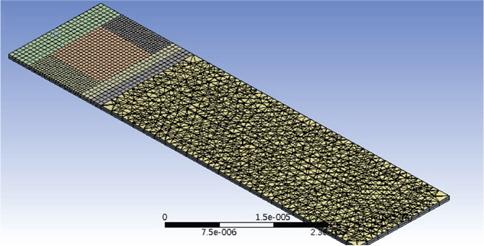 Based on the equivalent circuit model and parameters described in Table 1, total impedance change due to the variation in fabrication process was estimated by using spice simulation. Also, the impedance change was compared with the experimental results.

We examined the fabricated neural probes with SEM images to estimate the variations of electrodes (Fig. 5). The most noticeable variation in microelectrode characteristics in neural probe was the structure dimension such as size of microelectrodes and width and thickness of metal lines. From the SEM image in Fig. 5, process variations induced by patterning of metal layers exhibit 5% error in the worst case. Those variations were measured over the whole area of the processed wafer. However, the surface area of metal electrode exhibited no meaningful variation. 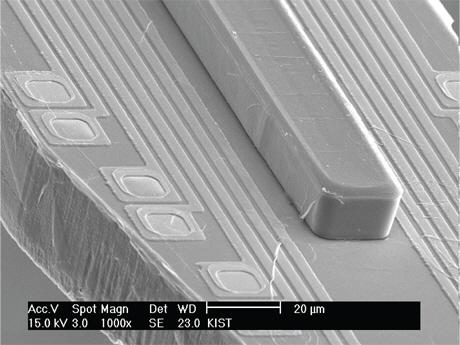 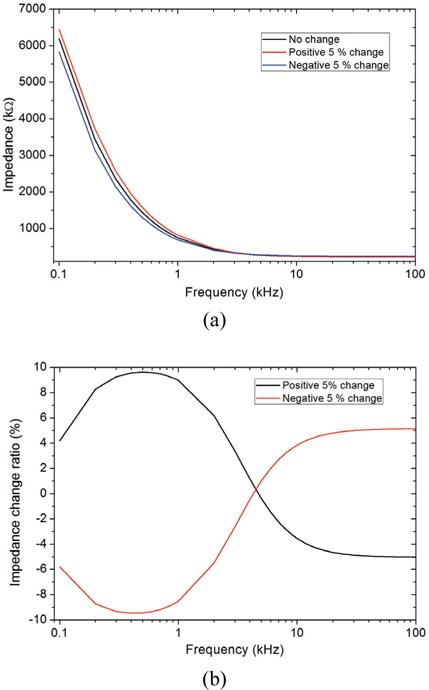 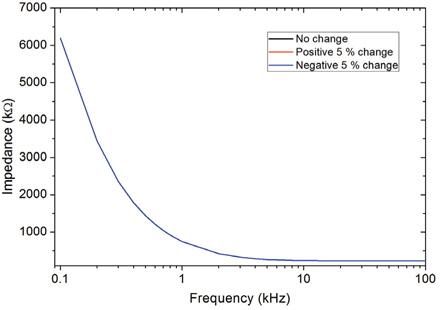 Fig. 7.Impedance variation of neural probe due to 5% variation in deposited metal thickness.

In the equivalent circuit model of the neural probe shown in Fig. 3, metal deposition process that affects the value of RL has negligible effect on the impedance of electrodes on the neural probe.