A hybrid electric vehicle (HEV) powertrain has more than one energy source including a high-voltage electric battery. However, for a high voltage electric battery, the average current is relatively low for a given power level. Introduced to increase the voltage of a HEV battery, a compact, high-efficiency boost converter, sometimes called a step-up converter, is a dc-dc converter with an output voltage greater than its input voltage. The inductor occupies more than 30% of the total converter volume making it difficult to get high power density. The inductor should have the characteristics of good thermal stability, low weight, low losses and low EMI. In this paper, Mega Flux® was selected as the core material among potential core candidates. Different structured inductors with Mega Flux® were fabricated to compare the performance between the conventional air cooled and proposed potting structure. The proposed inductor has reduced the weight by 75% from 8.8kg to 2.18kg and the power density was increased from 15.6W/cc to 56.4W/cc compared with conventional inductor. To optimize the performance of proposed inductor, the potting materials with various thermal conductivities were investigated. Silicone with alumina was chosen as potting materials due to the high thermo-stable properties. The proposed inductors used potting material with thermal conductivities of 0.7W/m·K, 1.0W/m·K and 1.6W/m·K to analyze the thermal performance. Simulations of the proposed inductor were fulfilled in terms of magnetic flux saturation, leakage flux and temperature rise. The temperature rise and power efficiency were measured with the 40kW boost converter. Experimental results show that the proposed inductor reached the temperature saturation of 107℃ in 20 minutes. On the other hand, the temperature of conventional inductor rose by 138℃ without saturation. And the effect of thermal conductivity was verified as the highest thermal conductivity of potting materials leads to the lowest temperature saturations.

In recent years, the automotive industry has developed more efficient and eco-friendly vehicles such as EV, FCEV and PHEV to meet environmental requirements [1, 2]. High power dc-dc converters have been proposed for these power trains to increase the stable output power [3]. In these designs, the inductor occupies more than 30% of the converter’s total size. Since high reliability in these automotive applications is required, enhanced thermal management is desired. 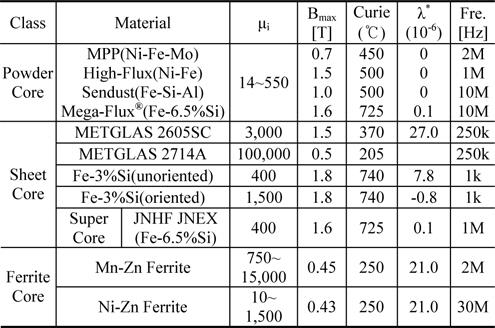 Ferrite cores are ceramic compounds made by sintering iron oxide with oxides of Mn-Zn or Ni-Zn. Mn-Zn ferrites [5]. These are widely used for common mode noise filters and 10~500kHz transformer applications [6]. However, for the ferrite core, the saturation flux density of 0.45T is less than metal alloyed cores of 0.7~1.8T. Therefore, the ferrite core requires a large size to overcome the low saturation flux density with the large bulk air gaps and large magnetic path length for the large current applications. Generally, the ferrite core is strongly recommended to be used below 120℃ due to its low Curie temperature.

The composition of Fe-6.5%Si has been known as excellent magnetic properties with near zero magnetostriction coefficient, high resistivity and high temperature reliability. The JNEX-Core® is good candidate as inductor for its relative low core loss, temperature reliability and low acoustic noise level. However, there are risks from radiated EMI and induction heating out of bulk air gaps, which are inserted to have good DC Bias characteristics [7].

Mega-Flux® cores are made from Fe-6.5%Si alloyed powder. Especially distributed air gap structure gives a lot of advantages such as minimized fringing flux, soft saturation, low acoustic noise level and low core losses. In this paper, the inductors were designed by Mega Flux® according to the above advantages. [8]

Inductor is designed by using Mega-Flux®. The basic design is almost equal to the typical inductor design. The designed specification and inductance of conventional inductor is as follows. 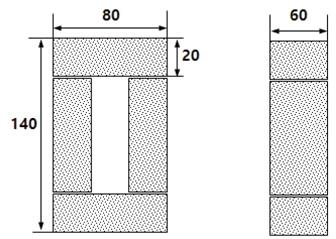 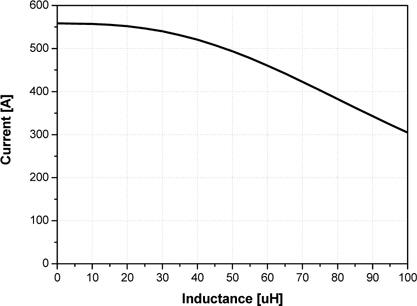 Fig. 3 shows the assembling process of the proposed inductor. The Mega-Flux® cores were assembled with bobbins and wound coils. After assembling, cores and coils were inserted into an aluminum case and molded with potting materials, which could enhance the thermal transfer from the surface of coils to the water cooled bottom. 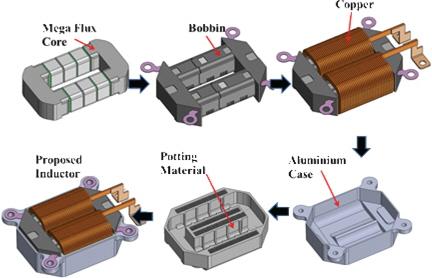 Fig. 4 shows the heat transfer of the proposed inductor. The potting materials and aluminum case can provide the excellent heat transfer from the internal heat to the water coolant.

The amount of the transferred heat is determined by the flow velocity and amount of coolant. The potting material and aluminum case can give the excellent thermal path from the internal heat to the bottom. 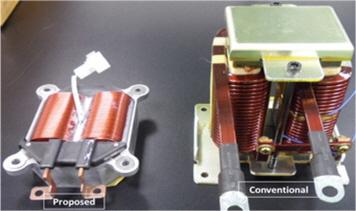 However the proposed inductor needs extra molding material and special bobbin and case the cost of improved inductor is decreased to 25% than conventional one due to its lower weight and downsized in Table 5.

The simulations were carried out as proposed with the condition of a 70A rated current and a ripple current of 58A. The distribution of temperature was simulated where the boundary conditions for simulation were the following:

The temperature change of the potting structured inductor was calculated in the simulation for various thermal conductivities of the potting materials. Fig.6 shows results based on the thermal conductivity of 0.7W/m-K, 1.0W/m-K and 1.6W/m-K. The peak temperature of the inductor was calculated to be 120℃ at 0.7W/m·K, 112℃ at 1.0W/m·K, and 102℃ at 1.6 W/m·K.

In order to decrease the temperature rise from 120℃ to around 110℃ without changing the thermal conductivity of 0.7W/m·K, 22% more potting material of 0.7W/m·K was required.

The results show that for higher thermal conductivity of potting material, the temperature increase of the inductor is lower.

The 40kW dc-dc converter was used for the experiments as shown in Fig. 7. The operational conditions were the same as those defined in Chapter IV. Fig. 8 shows the waveform at the condition of 70A rated current with the ripple current of 58A. 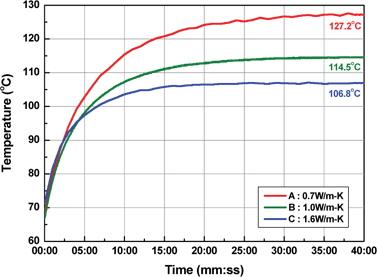 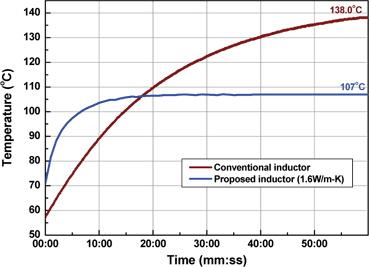 Fig. 9.Temperature rise of the conventional and proposed inductor

The temperature was not saturated in conventional inductor due to heat accumulation. On the other hands, the heat generated from proposed inductor flows easily through the bottom of the case with lower temperature rise.

The proposed inductor has reduced the weight by 25% and increased the power density by 360%compared with a conventional inductor. The potted structure can serve as an excellent thermal path from the internal heat to the water coolant. Silicone was chosen as the potting materials for its high thermo-stable properties. Simulation was carried out at the condition of 70A rated current and 58A of ripple current at 10kHz to compare the distribution of temperature. From the experimental result, the temperature of the conventional inductor reached 138℃ after an hour of operation. In comparison, the proposed inductor reached 107℃ after 30 minutes of operation.