Surface modified carbon felts were utilized as an electrode for the removal of inorganic ions from seawater. The surfaces of the carbon felts were chemically modified by alkaline and acidic solutions, respectively. The potassium hydroxide (KOH) modified carbon felt exhibited high Brunauer-Emmett-Teller (BET) surface areas and large pore volume, and oxygen-containing functional groups were increased during KOH chemical modification. However, the BET surface area significantly decreased by nitric acid () chemical modification due to severe chemical dissolution of the pore structure. The capability of electrosorption by an electrical double-layer and the efficiency of capacitive deionization (CDI) thus showed the greatest enhancement by chemical KOH modification due to the appropriate increase of carboxyl and hydroxyl functional groups and the enlargement of the specific surface area.

The shortage of water supplies for drinking as well as for industrial and agricultural uses is already a very serious problem. Desalination of seawater is considered one of the most practical solutions to overcome water shortages. To remove salinity from seawater, numerous desalination technologies have been developed, including thermal distillation, ion exchange, reverse osmosis, electric dialysis [1-5], and capacitive deionization (CDI). Among desalination processes, CDI has a number of advantages over other conventional desalination techniques, including lower energy consumption, inexpensive operating cost, and an environmentally friendly regeneration process [6]. CDI to remove ions from aqueous solutions is based on an electrosorption phenomenon occurring in an electrical double-layer formed at the interface of the externally charged electrodes. This electrosorption process is mainly dependent on the electrode surface properties such as the surface area, pore structure, pore size, and functional groups on the electrode surface. Porous electrode materials with high specific surface area are thus favorable for efficient electrosorption in the CDI process as well as high capacitive performance [7,8].

In this respect, activated carbon felts were utilized as an electrode for CDI to remove inorganic ions from seawater. The carbon felt consists of carbon fibers of small diameter with various porous structures, which can facilitate a more efficient electrosorptive reaction in an aqueous solution due to the high specific surface area. In this work, in order to increase the specific surface area and generate oxygen- containing functional groups on the electrode surface, the surfaces of activated carbon felts were chemically modified in alkaline and acidic solutions, respectively, and the electrochemical properties and the desalination efficiency of surface-modified carbon felts were investigated in terms of the specific surface area, and the changes of functional groups by chemical surface modification. For testing the CDI, a CDI unit cell was specially self-assembled, and an ion conductivity meter was used to monitor the change of ions in the NaCl solution.

Phenolic resin-based carbon felts (Kuraray Chemical Co., Japan) were prepared as a desalination electrode. For the purpose of chemical modification of activated carbon surfaces, carbon felts were treated in 1 M potassium hydroxide (KOH) and 1 M nitric acid (HNO3) solutions, respectively, at 90°C-100°C for 1 h. After etching using different solutions, the carbon felts were washed in deionized water at room temperature, and dried completely at 100°C under a vacuum for 24 h.

A commercial electrochemical analyzer (IM6, Zahner Elektrik, Germany) was employed for cyclic voltammogram (CV) and impedance tests. The potentials for this measurement are referenced to a saturated calomel electrode (SCE), and a platinum sheet was used for the counter electrode.

To evaluate the CDI efficiency, a CDI cell was specially prepared. The complete assembly was sandwiched between two Teflon plates. Fig. 1a shows the principle of CDI with the modified carbon felt electrodes. Modified carbon felts of 160 × 160 mm size were used as an electrode material of the CDI unit and they were placed face-to-face on both sides of a 0.7 mm thick spacer. Graphite foils were used as an inert current collector on the back side of the carbon felt electrodes. The CDI measurement system in Fig. 1b consists of the CDI unit, a peristaltic pump, a power supply, and a conductivity meter. A NaCl solution was pumped in by using the peristaltic pump from the bottom, and flowed out to the top of the unit. The applied potentials were 1.0 and 1.5 V in the tests with a flow rate of 50 mL/min. To evaluate the change in the concentration of the NaCl solution, an ion conductivity meter (YSI 3200) was used. 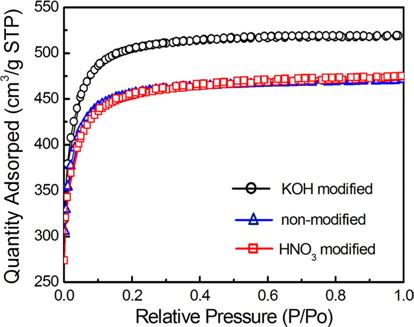 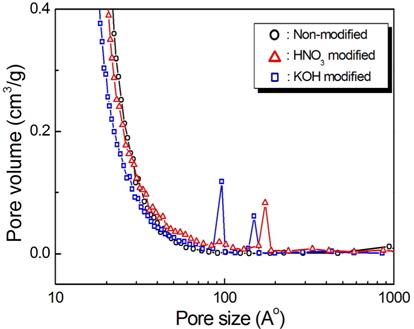 The porous properties of the modified carbon felts are summarized in Table 1. Here, the micropore surface (Smicro) and the micropore volume (Vmicro) were evaluated by the t-plot method, and the average pore diameter from the adsorption branch was calculated by the BET method using the following equation.

where Vt is the total pore volume and SBET is the BET specific surface area.

A FTIR analysis was performed in order to characterize the functional elements absorbed on the carbon felts. Fig. 5 presents the FTIR spectra of surface-modified carbon felts. Although the peak intensities varied, the overall shapes of the spectra were similar. Absorption peaks near 2916, 2850, 1700, 1540, 1100, and 710 cm-1 were observed in all of the carbon felts, irrespective of the surface modification. The absorption bands observed near 1700, 1540, and 1100 cm-1 are attributed to the characteristic carboxylic groups [10-13].

In particular, the absorption band observed near 1700 cm−1 is attributed to C=O bands characteristic of carboxyl functional groups (–COOH) and of ketone/quinine [14-16]. It has also been reported [13] that the band in the range of 1590-1570 cm−1 can be assigned to a combined band due to the aromatic ring mode of conjugated systems (diketone, ketoester, and carboxylate structures) and the absorption band at 1150 cm-1 is assigned to –C–O and –OH bonds in ether lactones, carboxyl, and phenolic structures. These bands are observed near 1540 and 1110 cm-1 in Fig. 5. In the case of the carbon felt modified by HNO3, the intensities of these bands are increased by an oxidation process. The band at 1845 cm-1 was observed with the HNO3 modified carbon felt due to newly formed carbon and oxygen functionalities, likely lactone and anhydride groups [17]. The FTIR spectra shown in Fig. 5 indicate that more oxygen-containing functional groups were generated by the HNO3 modification, such as carboxyl and hydroxyl (phenol) functional groups. In general, carboxyl and phenol groups are hydrophilic, and these compounds may promote the adsorption of inorganic ions by an ion-exchange reaction [18,19] in electrolyte. 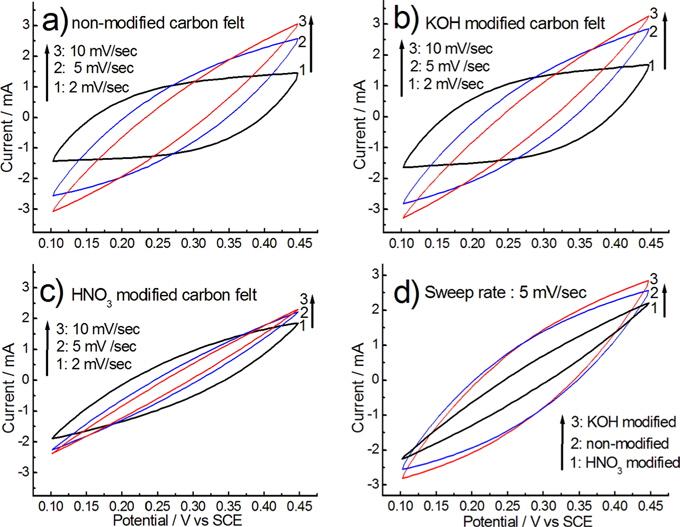 At a low sweep rate of 2 mV/s, voltammograms for the nonmodified and KOH modified carbon felts exhibit a low degree of distortion from the rectangular (box-like) shape, as shown in Fig. 6a and b. The rectangular shape in the CV curve represents ideal capacitive behavior due to the double-layer formation [20-22]. Thus, for non-modified and KOH modified carbon felts at a sweep rate lower than 2 mV/s, the motion of the electrolyte in pores on the carbon felt during the double-layer formation was not restricted relatively.

However, at higher scan rates, the responding current increased, and the CV profiles generally deviated from the rectangular shape due to a polarization effect and the ohm resistance to electrolyte motion in the pores [23]. Similar electrochemical behavior was observed with the non-modified and KOH modified carbon felts, as shown in Figs. 6a and b. For the HNO3 modified carbon felt, however, voltammograms with a sweep rate, as shown in Fig. 6c, represent a higher degree of distortion from the rectangular shape, and the induced current became smaller than that of the KOH and non-modified carbon felts. From the CV curves measured on all electrodes, as shown in Fig. 6, a steadily increasing and decreasing current was observed within the applied potential range, and they also showed no evidence that faradaic oxidation or reduction occurs in this range of potential. This indicates that ions adsorb on the electrode surface by forming an electric double-layer due to Coulombic interaction, rather than through electrochemical reactions [24].

The complex impedance was measured as a function of frequency in order to investigate the electrochemical behavior on the surface of the carbon felts. Electrochemical impedance spectroscopy experiments were performed at 25C in an unstirred and aerated solution of 0.5 M NaCl. All potentials are referenced to that of the a SCE. A platinum sheet was used for the counter electrode. The exposed geometrical surface area of the working electrodes in the electrolyte was 0.2 cm2. 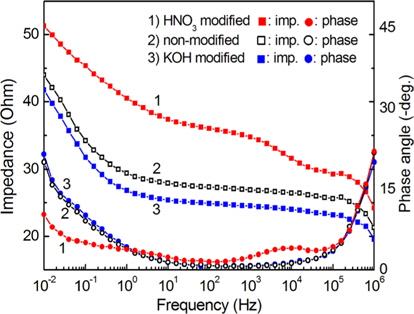 In order to evaluate the efficiency of the CDI properties, the CDI cell was charged with constant voltage. Upon applying different voltages between two carbon felt electrodes, cations are attracted into the negative electrode and anions into the positive electrode. As a result, fresh water can be produced from salty water. Fig. 8 shows a schematic of the basic mechanism of CDI.

Fig. 9 shows the CDI of carbon felts in a NaCl solution with 2000 μS/cm and 6000 S/cm, at applied voltages of 1.0 and 1.5 V, respectively. The desalination efficiency was estimated using the following equation. 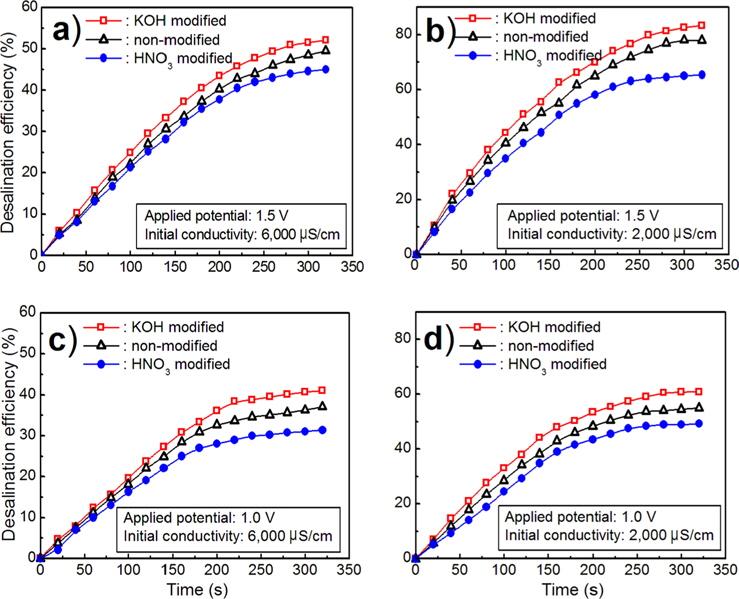 From the desalination measurement applying a potential of 1.5 V for 320 s for an initial concentration of 6000 μS/cm in a NaCl solution, the desalination efficiency was 49.5% for nonmodified, 52.1% for KOH modified, and 45.0% for HNO3 modified carbon felts.

Meanwhile, as the applied potential of the CDI cell was decreased from 1.5 V to 1.0 V, the corresponding desalination efficiency decreased, as shown in Fig. 9c and d. The kinetic constants for the CDI process during desalination can be calculated by the first order reaction rate Eq. (3).

where C is the ion concentration in solution; Eq. (3) can also be rearranged to give Eq. (4).

For the desalination process, the ion concentration C corresponds to the conductivity λ, and hence Eq. (4) can be written as Eq. (5).

The kinetic constant thus can be expressed as Eq. (6).

where λo and λt are the initial (inlet) and resultant (outlet) conductivities, respectively. 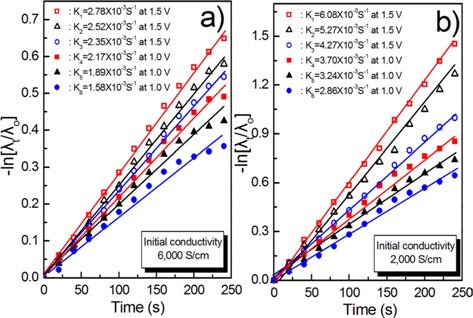 Fig. 10.The kinetic constants of carbon felts for the capacitive deionization (CDI) process in NaCl solution with conductance of (a) 6000 μS/cm and (b) 2000 μS/cm, under an applied potential of 1.5 V and 1.0 V.

The results of Figs. 9 and 10 indicate that the desalination ratio of the KOH modified carbon felt is superior to that of the other while the HNO3 modified carbon felt shows the lowest removal efficiency of inorganic salts. The CDI properties can be explained by the microstructure of the surface and the chemical functional groups formed on the surface of the carbon fiber during the surface modification process.

Regarding electrosorption ability in relation to pore structures, Peng et al. [25] reported that the relevant KOH activation increases the specific surface area and ion diffusion channels in the surface, giving rise to enhanced electrosorptive ability. More oxygen-containing functional groups were generated by KOH chemical modification. This suggests that the KOH treatment is an efficient process to improve the electrosorption and desalination efficiency of carbon felts. However, for the HNO3 modified carbon felt, although it shows greater formation of functional groups by surface modification relative to the other carbon felts, as shown in Fig. 5, the BET surface area was significantly decreased due to severe chemical dissolution of the pore structure. This is attributed to a slight decrease in the efficiency of CDI. The capability of electrosorption by the electric double-layer and the efficiency of CDI on the activated carbon felts were thus enhanced by the KOH treatment due to the appropriate increase of carboxyl and hydroxyl functional groups and the increased specific area.

From desalination measurement applying a potential of 1.5 V for 320 s, at an initial concentration of 2000 μS/cm in NaCl solution, the desalination efficiencies were 77.9% for non-modified, 83.3% for KOH modified, and 65.4% for HNO3 modified carbon felts.

The capability of electrosorption and the efficiency of CDI of the carbon felts showed the greatest enhancement by the chemical KOH modification, resulting from an appropriate increase of carboxyl and hydroxyl functional groups as well as increased specific surface area.