This paper proposes an exercise recommendation system for treating obesity that provides systematic recommendations for exercise and diet. Five body indices are considered as indicators for recommend exercise and diet. The system also informs users of prohibited foods using health data including blood pressure, blood sugar, and total cholesterol. To maximize the utility of the system, it displays recommendations for both indoor and outdoor activities. The system is equipped with multimode sensors, including a three-axis accelerometer, a laser, a pressure sensor, and a wrist-mounted sensor. To demonstrate the effectiveness of the system, field tests are carried out with three participants over 20 days, which show that the proposed system is effective in treating obesity.

The rapid recent increase in the global prevalence of obesity has been characterized as an epidemic by the World Health Organization (WHO) [1]. In most affluent populations, the prevalence of obesity among adults is 10-40%. Being overweight affects an even larger proportion of the population than obesity; approximately 65% of United States adults are currently overweight or obese, and the number of overweight adolescents in the United States has tripled in the past 20 years [2, 3] due to poor dietary habits and a lack of physical activity [4]. Diet and physical inactivity are the two main modifiable determinants of obesity. As reported by the WHO, there are over 2 million deaths related to physical inactivity each year. Furthermore, physical inactivity increases the risk of obesity which is one of the most significant health problems in the world. The WHO affirms that malnutrition is a health problem that is faced by many nations, and that one of the main reasons for malnutrition is that the consumption of energy-dense foods that are high in saturated fats and sugars, in combination with reduced physical activity.

The documentation of body mass index (BMI) and obesity are generally poor in primary care [5, 6]. Obesity is associated with increased frequency of many long-term conditions that are import in both primary and secondary care, including type II diabetes, cardiovascular diseases and musculoskeletal problems [7]. Interactive Health Communication Applications (IHCAs) can support participatory decision making by providing the unique infrastructure needed to deliver support for the multiple requirements of patients with chronic diseases (CDs) such as cardiovascular diseases, diabetes, cancer, and chronic respiratory diseases. IHCAs have also been used to facilitate patient adherence to weight loss regimens among overweight and obese women who were at an increased risk of developing breast cancer [8] and other chronic illnesses.

Obese people can manage and improve their health by following exercise and diet plans. For example, Mexico’s social security institute recently presented PREVENIMSS [9], a program to prevent diseases caused by malnutrition and obesity. In this program, specialists assess the patient’s health to recommend personalized diet and exercise plans, and patients are encouraged to manage and maintain their own unique plan. We believe that the development of an effective recommendation program with appropriate exercise and diet can be effective in treating and preventing obesity. Of particular interest are people who do not know what they should do to deal with obesity. With this in mind, and central to this research, is the development of an automatic recommendation system for exercise and diet such that effective nutrition and physical activity are maintained without intensive input from specialists. To achieve this goal, sensing methods have been developed that collect data including daily caloric expenditure, blood pressure, height, weight, total cholesterol, and blood sugar. Based on these collected data, the system described here provides appropriate recommendations for changes in exercise and diet.

The remainder of the paper is organized as follows. Previous work that is relevant to this study is discussed in Section 2. The architecture of the proposed system is then described in Section 3. Section 4 describes a performance evaluation via a 20-day field testing. Concluding remarks are given in Section 5, and directions for future work are identified.

There have been a number of systems developed to prevent and/or treat obesity, and researchers have considered the relationships between obesity, diet, and exercise. Triplebeat [10] estimates the heart rate and speed using processed sensed data, and assists users in achieving a predefined workout goal. The user interface consists of information including exercise goals, caloric expenditure, the position among a set of competitors, and heart rate. Click clique [11] is a preventative health care application that runs on a mobile phone. The application encourages teenage girls to exercise via interaction with their peers. MOPET [12] is a PDA-based personal trainer system that manages physical fitness activities. The system guides users through an exercise session, and provides advice based on current conditions. To solve obesity-related health problems, these systems encourage users to exercise more; however, the users should provide the goals matched to their requirements.

Other approaches to treat obesity include systems to encourage changes in diet and/or nutrition issues [13, 14]. Mankoff [14] designed an application to help users keep track of the nutritional content of food they eat. The system generates recommendations about healthier food items or supplementing missing nutrients using shopping receipts. Diet-aware Dining Table [13] is a dietary tracker system that uses a specialized dining table equipped with sensors. The dining table can track what is eaten and how many people; however, the system requires accurate information on the intake of a healthy and balanced diet, and the effectiveness of the system decreased when insufficient information was available. Although these systems exhibited meaningful results from a healthcare perspective, it is desirable to consider exercise as well as diet to improve the effectiveness of controlling obesity. Exercise without a healthy diet or a balanced diet without regular exercise are not sufficient; the system should recommend exercise and diet to users based on their personal health status.

Some researchers addressed the potential on the combination of the exercise and diet systems [14, 15], including Hyperfit [14], which provides an Internet-based service for personal management of nutrition and exercise. The service includes self-evaluation tools for goal definitions, diaries for food and exercise, testing and analysis tools, feedback, and recommendations from a virtual trainer. Silva’s work [15] described a virtual specialist that stays with patients and gives users advice, such that the standard methods of diet and exercise are adhered to. However, it is difficult to manage personal health without various personal data using this system. With this in mind, in this study, we develop a new recommendation system that considers a balanced diet and appropriate exercise.

A behaviorally based, lifestyle, physical activity, counseling approach, in which sedentary individuals are encouraged to integrate more activity into their daily routines, by climbing stairs, taking short walks, and generally increasing daily activity, has been shown to be effective over a 2-year period [16,17]. The number of global smartphone users surpassed 1 billion in 2014, and it is expected to reach 2 billion in 2015. Mobile phones have recently emerged as important devices for context-aware and intelligent services. Such high performance services have been achieved as a consequence of various embedded sensors, such as the Global Positioning System (GPS) and accelerometers; studies into human activity have been carried out using these built-in sensors, whereby various intelligent services were proposed using personal body motion data [18-21]. Here activity data were collected using a mobile device equipped with a three-axis accelerometer, and an intelligent system that recommends both exercise and diet suggestions was developed. Recently, the contributing factors to the obesity and physical inactivity epidemic in this population may be both diagnosis-specific and environmental [22]. Some studies have shown the beneficial effect of diet and physical activity on weight loss [23]. Wharton et al [24] found greater adherence to dietary tracking with a commercially available diet app (Lose It!).

3. Recommendation System for Exercise and Diet 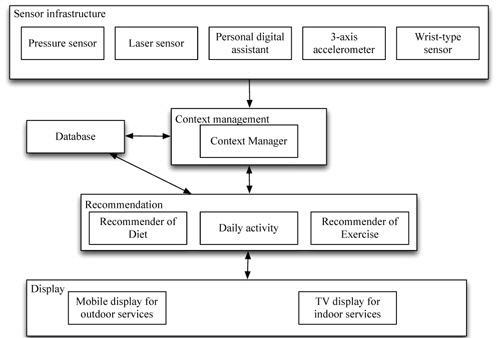 To measure and record data on individuals, an area is designated as an entrance, and a pressure sensor and a laser are setup to determine weight and height, as shown in Fig. 2(a). Blood pressure is measured using a wrist-mounted sensor, as shown in Fig. 2(b). The total cholesterol and blood sugar are collected from electronic medical record (EMR) data and personal medical examinations using a mobile device, as these data are necessary to provide personal recommendations. To detect human activity, a smart shoe with a three-axis accelerometer and a microcontroller unit (MCU) was developed, as shown in Fig. 2(c).

The MET is a way of expressing the energy cost of physical activities as multiples of resting metabolic rate (RMR), and is defined as the ratio of

where W is weight [kg] and H is height [m]. The recommenders can compare with the past context in database. In addition, the context manager transfers the processed context to the recommenders.

After collecting and analyzing the contextual data, the context manager transfers the processed data to the exercise and diet recommendation system. This system analyzes the data, and determines appropriate suggestions for exercise and diet. Here BMI is divided into five categories: normal, overweight, obese, super obese, and hyper obese. The exercise recommendations include four subcategories: walk slowly (6 km/h), walk quickly (8 km/h), run slowly (10 km/h), and run quickly (12 km/h). To compute the default exercise recommendations, the system calculates the average of daily activity over the past 7 days. The default amount of exercise is the sum of this average, and the recommendations are based on BMI, and calculated using empirical data. From the average MET for activities described in [26], the exercise time can be calculated:

where ARE is amount of recommended exercise based on BMI (kcal) and ADA is one week average of daily activity.

The daily routine of a person may vary from day to day, and the system should consider this to improve the reliability of the recommendations. The difference between the default level and the daily activity for the current day is calculated, and if this is negative, the system adds this to the default level of exercise for the following day. As listed in Table 1, a person (level 3, 75 kg, one week of average daily activity; 132.5 kcal) needs to burn approximately 352.5 kcal daily. If, for example, the daily activity for the current day is 120 kcal, the calculated exercise for the following day will be level 5 rather than level 3. As intensive exercise, the system recommends the maximum value for the category. Therefore, the exercise recommendation becomes 282.5 kcal.

The diet recommendation process is similar to that for exercise. The BMI is divided into categories as listed in Table 2. The system selects breakfast, lunch, or dinner as the primary classification, and the total cholesterol, blood sugar, and blood pressure as the secondary classification. The system then extracts the recommended diet to prevent hyperlipidemia, diabetes mellitus, and hypertension. A total cholesterol level of greater than 240 mg/dl is classified as hyperlipidemia. A blood sugar level above 110mg/dl other than shortly after eating corresponds to diabetes mellitus. When the systolic blood pressure is consistently greater than 140 mmHg, this is considered hypertension. If the context data are outside of these levels, the system prohibits certain foods. Table 3 lists example diet recommendations, which include recommended meals, portions, and the total caloric intake for subcategory 2 and level 3.

Table 2.Diet recommendation based on five categories of BMI 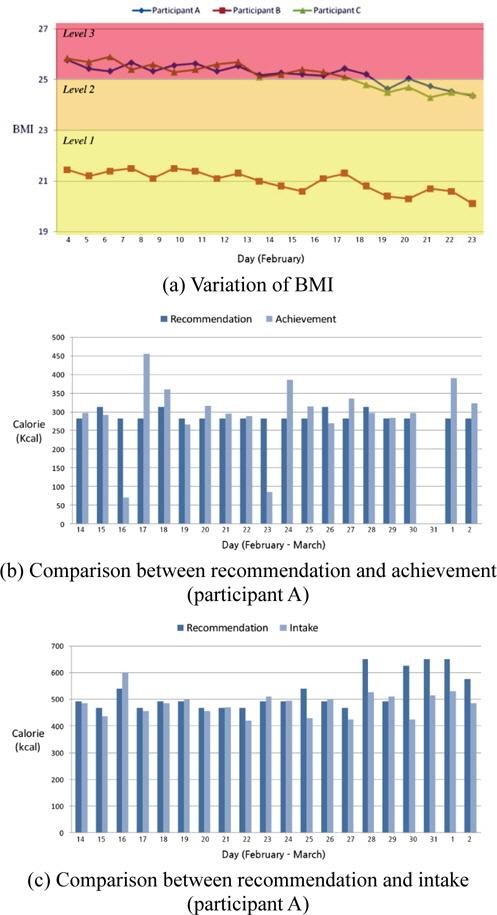 Each of the factors addressed by the exercise and diet recommendation system may be significant in lifestyle changes. The system described here is a prototype, and there is a requirement for such systems to treat obesity. It is expected that the system will encourage patients to carry out regular exercise, and to follow diets that are healthy, thus changing their lifestyles to control obesity. As part of future work, we plan to focus on improving the performance of the system through extensive field tests. In the near future, we plan to evaluate the usability of the current prototype system over one month via field tests with a larger number of participants.

Table 5.Diet recommendation based on five categories of BMI 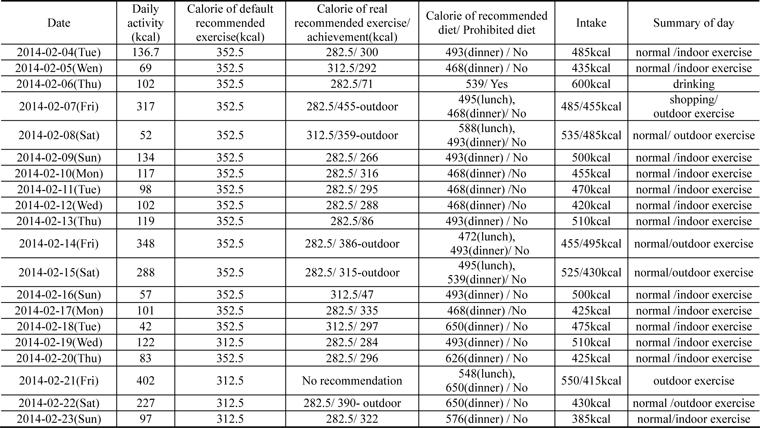