In the power plant using high temperature fuel cells such as Molten Carbonate Fuel Cell(MCFC), and Solid Oxide Fuel Cell(SOFC), the generated electric power per area of power generation facilities is much higher than any other renewable energy sources. - High temperature fuel cell systems are capable of operating at MW rated power output. - It also has a feature that is short for length of the line for connecting the interior of the generation facilities. In normal condition, these points are advantages for voltage drops or power losses. However, in abnormal condition such as fault occurrence in electrical system, the fault currents are increased, because of the small impedance of the short length of power cable. Commonly, to minimize the thermal-mechanical stresses on the stack and increase the systems reliability, we divided the power plant configuration to several banks for parallel operation. However, when a fault occurs in the parallel operation system of power main transformer, the fault currents might exceed the interruption capacity of protective devices. In fact, although the internal voltage level of the fuel cell power plant is the voltage level of distribution systems, we should install the circuit breakers for transmission systems due to fault current. To resolve these problems, the SFCL has been studied as one of the noticeable devices. Therefore, we analyzed the effect of application of the SFCL on bus tie in a fuel cell power plants system using PSCAD/EMTDC.

Recently, the development and dissemination of renewable energy have received much attention to deal with reduction of greenhouse gases and the depletion of fossil fuels. Renewable Portfolio Standard(RPS) which is a strategy that power producers supply a certain amount of renewable energy from their total power generation capacity has been in force since 2012 in South Korea and it is expected that the supply of renewable energy will be encouraged until 2022 by gradual increasing of supply obligation rate through RPS [1].

Even though the development and dissemination of solar and wind power generation have been actively worked on, it is not easy to secure the RPS’s supply amounts of duty by solely using solar and wind power because it is very difficult to build a large scale power plant using the solar energy and it is greatly affected by the geographical location in case of wind power system. In addition, it is not easy to ensure stable power supply without auxiliaries such as Battery Energy Storage Systems(BESS) because of serious fluctuation in the power output.

Fuel cell generator of each that is made of dozens of fuel cells composing the scores of MW class’s power complex will operate with a supply of the fault current in the event of fault of the internal organization and short power lines making up the internal organization will make equivalent impedance very small in condition of malfunction. Accordingly, a large fault current will be flowing fault point so that it must be required to install a large breaking capacity of circuit breaker. If the power plant builds additional facilities in response to increase of load, however, breaking capacity of the breaker will reach the limit.

According to increase of power generation equipment’s capacity, it should be required at least two of MTR’s parallel operation as well as capacity enhancement of them in order to improve reliability and efficiency of the power plant. The parallel operations of MTR offer have some merits in terms of cost and area of installation. However, there is a demerit that the large fault currents could be flowed in condition of internal fault because of small equivalent impedance. So the efforts to decrease the scale of fault currents have continued [7]. Superconducting Fault Current Limiter(SFCL) also has been the focus as an alternative to decrease fault currents, prevent power losses and voltage drop and maintain the safety of loss power system. 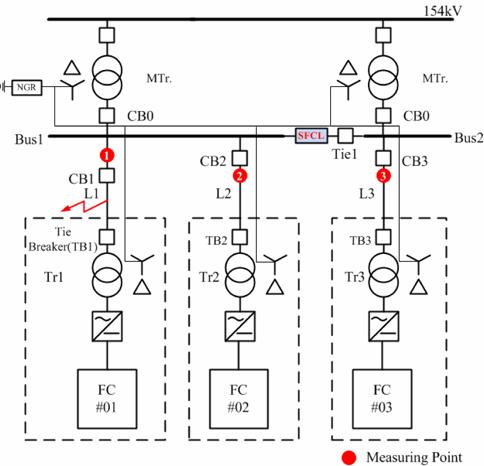 High temperature fuel cell such as Molten Carbonate Fuel Cell(MCFC) or Solid Oxide Fuel Cell(SOFC) can use carbon monoxide as well as hydrogen as a fuel and exhausted heat energy has advantage of being considered having possibility to draw out high efficiency through combined cycle installed extra power generation process [2]. MCFC can compose renewable energy power plant of mass capacity consisted of multiple MCFC equipment because equipment of 2.8MW has already been introduced into market [3]. However, high temperature fuel cell operated in over 600℃ is difficult to control or change the output power because of thermal-mechanical stress and also it takes a lot of time for startup or cooldown. Because of this long time for cooldown, when the faults occur in electrical system, MCFC cannot reduce the electric power immediately. Mostly, its change causes degradation of fuel cell life cycle so the fuel cell power generation system is required reasonable protection coordination systems [2]. Another problem is the very small short circuit impedance. In the power plant using MCFC, the generated electric power per area of power generation facilities is much higher than any other renewable energy sources. - High temperature fuel cell systems are capable of operating at MW rated power output. - It also has a feature that is short line or cable for connecting the interior of the generation facilities. In abnormal condition such as fault occurrence in electrical system, the fault currents are increased, because of the small impedance of the short length of power cable. To supplement these weakness, high temperature fuel cell manufacturers provide independent technology controlling temporary output by adjusting inflow of fuel [4, 5].

Fig. 2 shows internal structure of each of the MCFC modules. A number of fuel cell stacks are connected with step-up transformer through inverter and the transformers’ 3rd winding supply the electric power to Balance Of Plant (BOP) of the fuel cell module. The above BOP equipment includes pump for fuel, air, and heat recovery, air blower, and water purification equipment and so on. 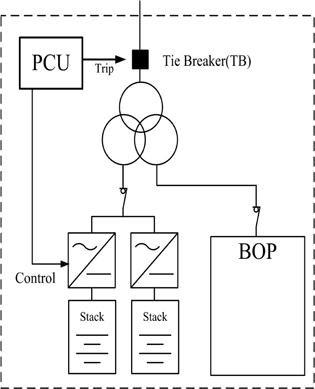 The circuit breaker is installed in connecting point between the power generation system and a step-up transformer for system separation [2, 3].

The protection elements are generally presented in the IEEE Std. 1547, are summarized in Table 1 [8]. These elements are implemented through Power Conditioning Unit(PCU). When the external fault detection, PCU open the Tie Breaker(TB). At this moment, the fuel cell module will operate in the island operation mode as it supplies electric power only to BOP during fault duration. After the external grid returns and is seen to be stable, the fuel cell module is designed to automatically synchronize and connect to the utility grid.

In order to limit fault currents, many models for the SFCL have been developed such as resistive-type, reactivetype, trigger-type, and so on. [10]. In this paper, we modeled a resistive-type SFCL that is mostly basic and used widely which represents the experimental studies for superconducting elements of SFCL. Quench and recovery characteristics of a resistive-type SFCL are modeled based on [10] and [11]. A resistance of the SFCL according to time t is given as follows:

where, Rn and TF are the resistance saturated normal temperature and time constant. In addition, t0, t1, and t2 are the quench-starting time, first recovery-starting time, and secondary recovery-starting time, respectively. a1, a2, b1, and b2 are coefficients of the first-order linear function to denote the experimental results of the recovery characteristics of the SFCL [10-12]. The values used for the parameters are summarized in Table 2. 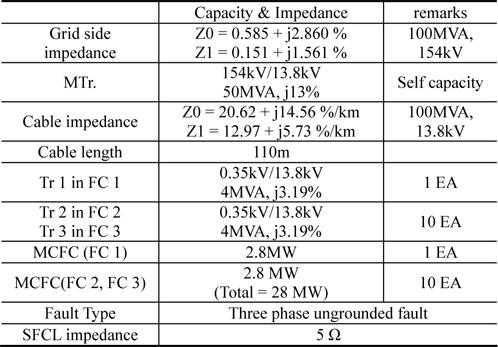 3. The Effect of the Resistive-Type SFCL

We proposed the application of SFCL in fuel cell power plant system as the ways that is to decrease the fault current capacity through the equipment and the way of preserving the lifespan of fuel cells. Also, we checked the current flowing into the fault point at the measuring-point 1, 2, and 3 in case of three-phase ungrounded fault at the fault point as seen in Fig. 1.

Fig. 4 are deducted coming results by simulation that if SFCL is applied to fault current flowing into the fault point from grid side and an adjacent fuel cell or not. Before the fault occurrence at 0.5s, the load current is 131Arms in the normal state. In case of uninstalled SFCL shown in Fig. 4(a), we should install a circuit breaker with a rated breaking capacity of 40kA in order to block the current safely which is 28.7kA and flowing into fault point [13]. But if we could install the SFCL shown in Fig. 4(b), it is possible to reduce the fault current by 19.3kA and enables to replace breaking capacity of circuit breaker from 40kA to 25kA. Also, it means that it is possible to increase the power generation capacity more that at present when using a breaker with 40kA. 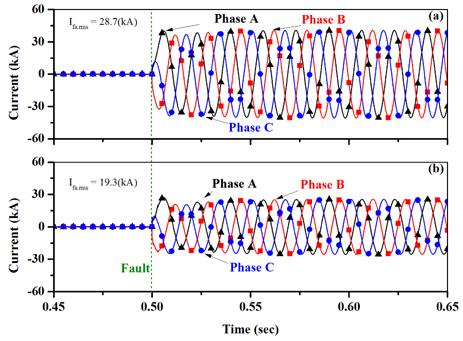 Fig. 4.Fault currents at measuring point 1: (a) without SFCL; (b) with SFCL 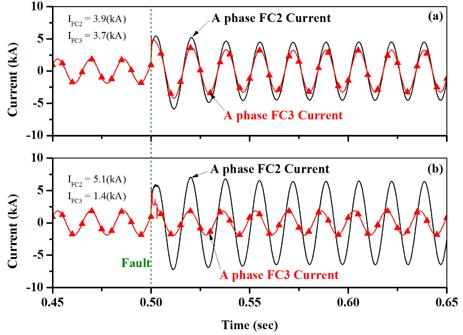 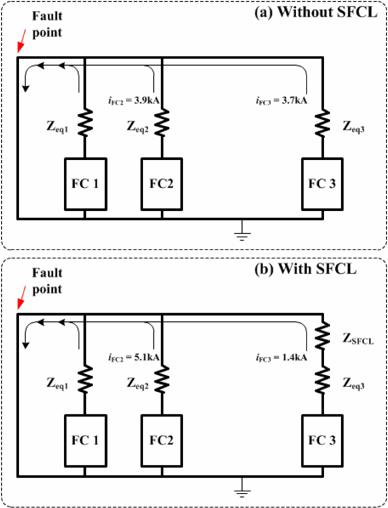 Therefore, it is possible to preserve lifespan of the fuel cell connected to the Bus2.

The fuel cell system is one of renewable energy sources which are able to generate power constantly. The fuel cell system has a lot of advantages. However, fuel cell systems tend to have high fault currents because it comparably features small equivalent impedance and high power density. And the fluctuation of output power causes degradation of fuel cell life cycle. To resolve these problems, we propose the application of SFCL.

In this paper, we modeled the K-Fuel cell power plant in South Korea using PSCAD/EMTDC. We applied the SFCL in bus tie in K-fuel cell power plant and simulated the three-phase ungrounded fault. We confirmed the decreased breaking capacity of circuit breaker by reducing fault currents.

Also we confirmed the possibility from preventing trip of trouble-free fuel cell for preserving the fuel cell life degradation by SFCL. When the SFCL is applied, the fault current of fuel cell modules connected the opposite bus is 140A for single module. It is 107% of rated current. Through this result, fuel cell life can be preserved.

As a result, the SFCL is able to a reasonable alternative for the efficiency improvement of fuel cell power plant and preservation of the life cycle of fuel cell stack by preventing trip.