The Korean Society of Pharmacognosy (한국생약학회)

The edible fruits of Rubus crataegifolius and Rubus parvifolius (both Compositae family) have been used as functional foods or medicinal herbs for treatment of diarrhea, diabetes mellitus and sexual disinclination.1 Rubus coreanus was previously reported on anti-nociceptive and anti-inflammatory effects2 and anti-rheumatic and gastroprotective effects.3 The bioactive compounds responsible for those effects are niga-ichigoside F1 and its aglycone 23-hydroxytormentic acid. Those compounds isolated from R. crataegifolius and R. parvifolius also exert the same functional activity.

Although the two plants are used as resources of red raspberry, the morphology is quite different each other. R. crataegifolius which is an upright perennial herb has the cleft simple leaf. By contrast, R. parvifolius which is a creeping perennial plant has the pinnate compound leaf with each three leaflets. Higher plants accumulate a large number of different primary metabolites such as amino acids, fats and carbohydrates as well as secondary metabolites such as phenolics, terpenoids and alkaloids.4 The plants respond to a variety of stresses by producing many secondary metabolic compounds that can exert defensive actions against predation, competition and diseases.5 For example, plants that are under attack often produce and accumulate secondary metabolites known as phytoalexins, which act as toxins to the attacking organisms.5

The niga-ichigoside F1 may be synthesized from the precursor tormentic acid via 23-hydroxytormentic acid in the leaves of Rubus species. These triterpenoids have the 3β-OH group, whereas euscaphic acid and kaji-ichigoside F1 have 3α-OH group, as shown in Fig. 1. The biosynthesis and accumulation of the triterpenoids with 3α-or 3β-OHs may increase under severe stresses. As hydrolyzable tannins generally include gallotannin and ellagitannin, methyl gallate and ellagic acid can be used for quantitative indices of total tannin.6 Tannins, polyphenolic compounds, are mainly located in the vacuoles or surface wax of the plants. These sites are where tannins do not interfere with plant metabolism, and it is only after cell breakdown and death that the tannins are active in metabolic effects during plant-pathogen interaction.5 In addition, they are an important concentration determinant in growing plant parts such as the secondary vascular tissue and the layer between the cortex and epidermis.7 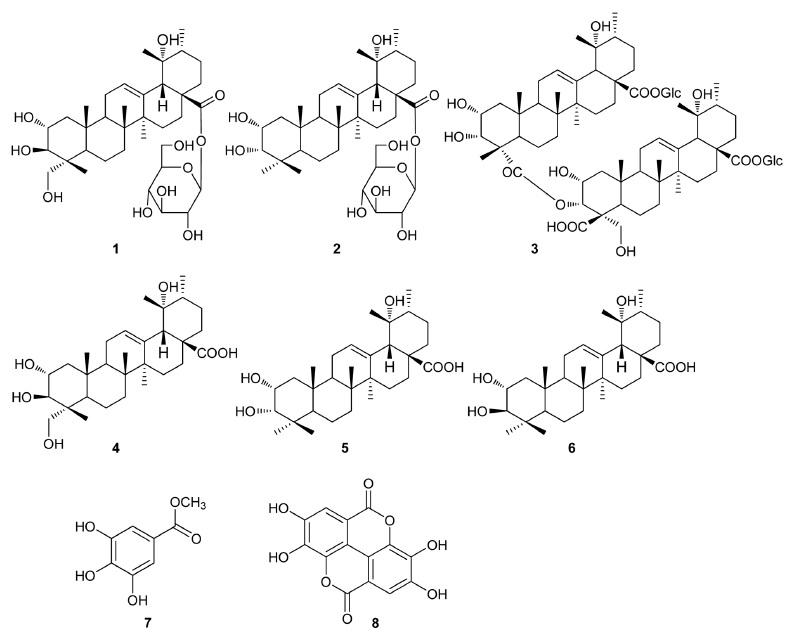 Leaf spot caused by the fungus Mycosphaerella fragariae is one of the most common and widespread diseases of Rubus species in Korea and strawberry in America. Since many major cultivars are not completely resistant to leaf spots, it is the most agriculturally important disease. The fungus Colletotrichum acutatum, a causal agent of a notorious fruit rot known as anthracnose, also attacks the leaves and petioles of Rubus plants.8,9 In this study, we compared the quantitative changes of secondary metabolites in the infected versus the uninfected leaves and young versus mature leaves.

Plant material − The Rubus crataegifolius (natchem# 46) and Rubus parvifolius (natchem# 48) were collected over June - July on a mountain near Sangji University in Wonju city, Gangwon-do, Korea. The voucher specimens (natchem #46 and 48) were identified by Prof. Sang-Cheol Lim (Dept. of Horticulture and Landscape Artchtecture, Sangji University, Korea). The collected leaves were divided into four classes as follows; young leaves (less than 4.0 × 3.3 cm), mature leaves (less than 11.1 × 9.7 cm), uninfected- and infected leaves of the mature ones. Here, infected- and uninfected leaves are designated as the mature leaves with and without leaf spots, respectively. The mature leaves highly damaged by the leaf spot were chosen for the infected leaves; but, clean leaves without leaf spots were chosen for the uninfected leaves. They were dried and pulverized for HPLC analysis.

Extraction − One gram of the pulverized plant material was sonicated in methanol (MeOH) (40 mL) at 40 ℃, filtered, concentrated to dryness in a rotatory centrifuge evaporator, and further dried by a freeze-dryer. The concentrates were weighed and diluted for HPLC analysis.

HPLC analysis for total tannin − Total tannin was quantitated using the indicators, ellagic and gallic acid following the treatment with anhydrous methanolic HCl as previously described.6 Using this method, HPLC was performed for analysis of total tannin. Twenty mg of ground samples was extracted in a screw-cap tube (10 mL) containing 5 mL anhydrous methanolic HCl. The tubes were placed in Muti-Position (Lab. Tech) containing reflux condenser at 100 ℃ for 60min. The mixtures were cooled to room temperature and filtered (0.50 μm). The filtrates were evaporated to dryness and the residues were dissolved again in 5 mL of 80% aqueous methanol. The filtrate was injected into the same HPLC column used for triterpenoid analysis. Ellagic acid and methyl gallate levels were detected at the wavelength of 252 nm and 280 nm, respectively.

This research was aimed to find the difference of the contents of triterpenoids and tannins between the leaves of R. crataegifolius with the cleft simple leaf and R. parvifolius with the pinnate compound leaf. In addition, Rubus plants are known to be infected by two types of fungi, M. fragariae and C. acutatum; leaf spot infected by the fungus M. fragariae is one of the most common in Korea. Therefore, the leaves with the leaf spot due to the tissue injury were also subjected to HPLC analysis.

The types of triterpenoids and hydrolysable tannins that were examined are shown in Fig. 1, and all these compounds were clearly resolved and identified on HPLC chromatograms (Fig. 2 and 3). The resulting quantitative data are shown in Table 1 and 2. We would target the size of the collected leaves according to the degrees of infection and maturity as judged by the sizes of the collected leaves: the uninfected and infected leaves; mature (less than 7.9 × 8.0 cm) and young (less than 5.4 × 5.0 cm) leaves.

Fig. 2.HPLC chromatogram of triterpenoids in mature leaves of R. crataegifolius (A) and R. parvifolius (B). 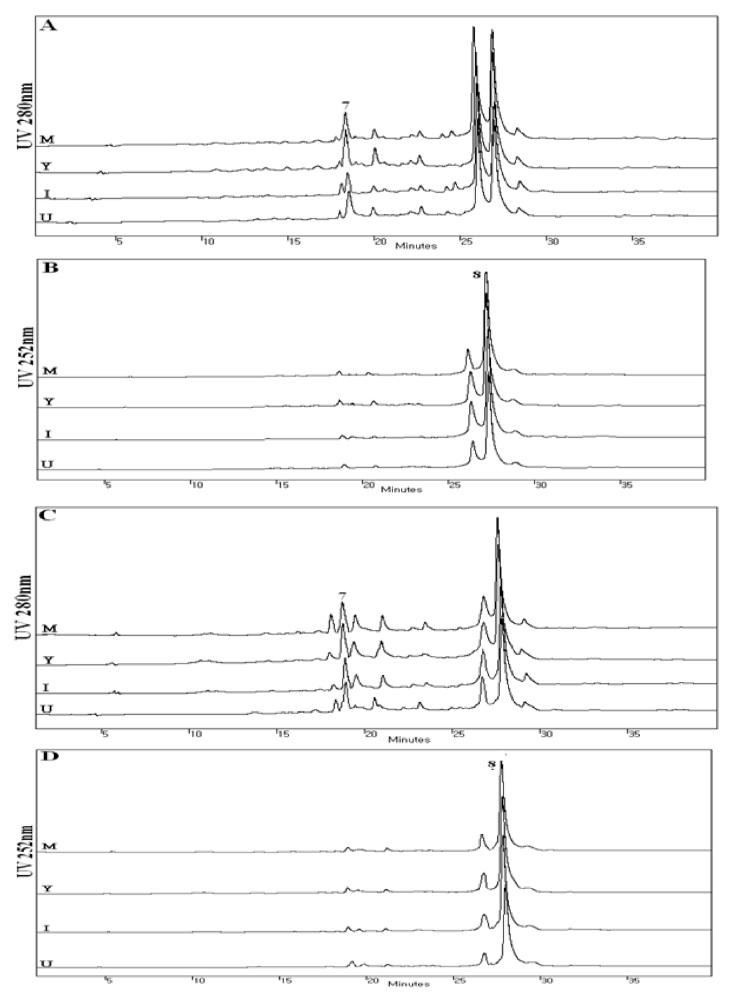 Fig. 3.HPLC chromatogram of methyl gallate (A, C) and caffeic acid methyl ester and ellagic acid (B, D) in R. crataegifolius (A, B) and R. parvifolius (C, D) leaves. 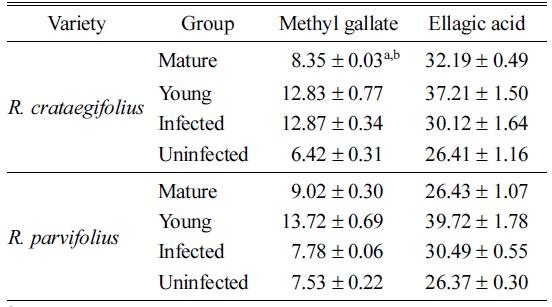 Fig. 4.Comparison of total content of triterpenoids and tannins in the R. parvifolius (A) and R. crataegifolius (B). ■, total triterpenoid; □, total tannin; abbreviation M (mature leaves), Y (young leaves), I (infected leaves), U (uninfected leaves). The value of concentration is expressed mean ± S.D. for three experiments. Concentrations with the same letter on the bar are not significantly different each other (p < 0.05) by Duncan’s multiple range test among black bars or among the white bars

Gallotannins and ellagitannins have been isolated from Rubus species.10 As gallic acid or hexahydroxydiphenic acid are generally esterified to monosaccharides to form tannins, the tannins of this type can produce methyl gallate or ellagic acid on methanolysis. Thus, total tannin can be quantified using the markers of ellagic acid and methyl gallate capable of being produced by methanolysis.6 As shown in Table 2, no considerable changes in ellagitannin concentrations were observed between each of the groups. On the other hand, marked differences in gallotannin concentrations were found except for the infected and uninfected groups of R. parvifolius. Unlike the mature leaves, the infected leaves contained higher level of methyl gallate than the uninfected leaves in R. crataegiolius, suggesting that the infection also leads to an increased accumulation of tannin. However, the increase of tannin content followed by tissue infection was very weak in the leaves of R. parvifolius.

The two plants have quite different morphology: R. craetaegifolius is an upright plant with the cleft simple leaves and R. Parvifolius is a creeping plant with pinnate compound leaves. Variations of the contents were more significant in R. crataegifolius than in R. parvifolius. The different morphology may affect the tendency of responses to the pathogen. Thus, taken all the results together, the developmental stage may influence the levels of gallotanninin with a similar accumulation tendency in the two Rubus species. Ellagic and gallic acid play an important role in human nutrition, along with antioxidant,11 anti-inflammatory,12 anticancer and anti-atherosclerotic13 effects. Recently, the simultaneous quantification of gallic and ellagic acid also has been used for routine quality evaluation of herbal raw materials14 with respect to free radical scavenging, lipid peroxidation inhibition, and bacteriocidal activities.15