The genus Acteniceromorphus is taxonomically reviewed for the first time in Korea. From the previously recorded three species, two species, A. selectus (Candèze, 1894) and A. fulvipennis are confirmed as misidientification of species which are endemic to Japan. Another species, A. chlamydatus is unavailable any Korean specimens. Additionally, we found A. ferrugineipennis as new to Korea. We also provide a comparison of DNA barcoding for two species previously misidentified and the newly recorded species, except A. chlamydatus. DNA barcoding result shows that each species is clearly delimited at species-level from each other by large interspecific genetic distance over 7.2%.

In Korea, three species, A. selectus, A. fulvipennis and A. chlamydatus, have been reported through previous faunistic studies (Kim and Kim, 1972; Kim, 1981; Kim, 1984; Lee et al., 1985; Paik et al., 1993). But there were providing only species lists, no any taxonomic works and considerations despite all of the recorded species are known as the Japanese endemic species. This study therefore was carried out a taxonomic review on the species of Acteniceromorphus with DNA barcoding to reveal more reliable species diversity in Korea and to assist in the rapid species identification in the further.

We collected specimens belonging to the genus Actenicermorphus through field works in Korea since 2006 and surveyed the specimens used in the previous faunistic studies across visiting the related institutions such as Sungshin Women’s University in Seoul, Jeju National University and Folklore & Natural Museum in Jeju (FNMJ) for 2009 and 2010. We also examined reference specimens of three Japanese species, A. selectus, A. fulvipennis and A. chlamydatus, which were offered from Prof. Jong Wok Lee, Yeongnam University, Daegu, Korea and Dr. Hitto Ôhira, Okazaki, Japan. We complied with the methods for morphological examination of specimens and DNA barcoding represented in Han et al. (2009, 2013). Especially, the analysis of DNA barcoding was performed to reconfirm reliable species identification or specific ranks within and between the examined morphospecies. We also used eight COI sequences of two species of Acteniceromorphus and a species of Liotrichus, as outgroup, extracted from GenBank(Oba et al., 2015; Pentinsaari et al., 2014). The used specimens in DNA barcoding and Accession numbers are given as Table 1. 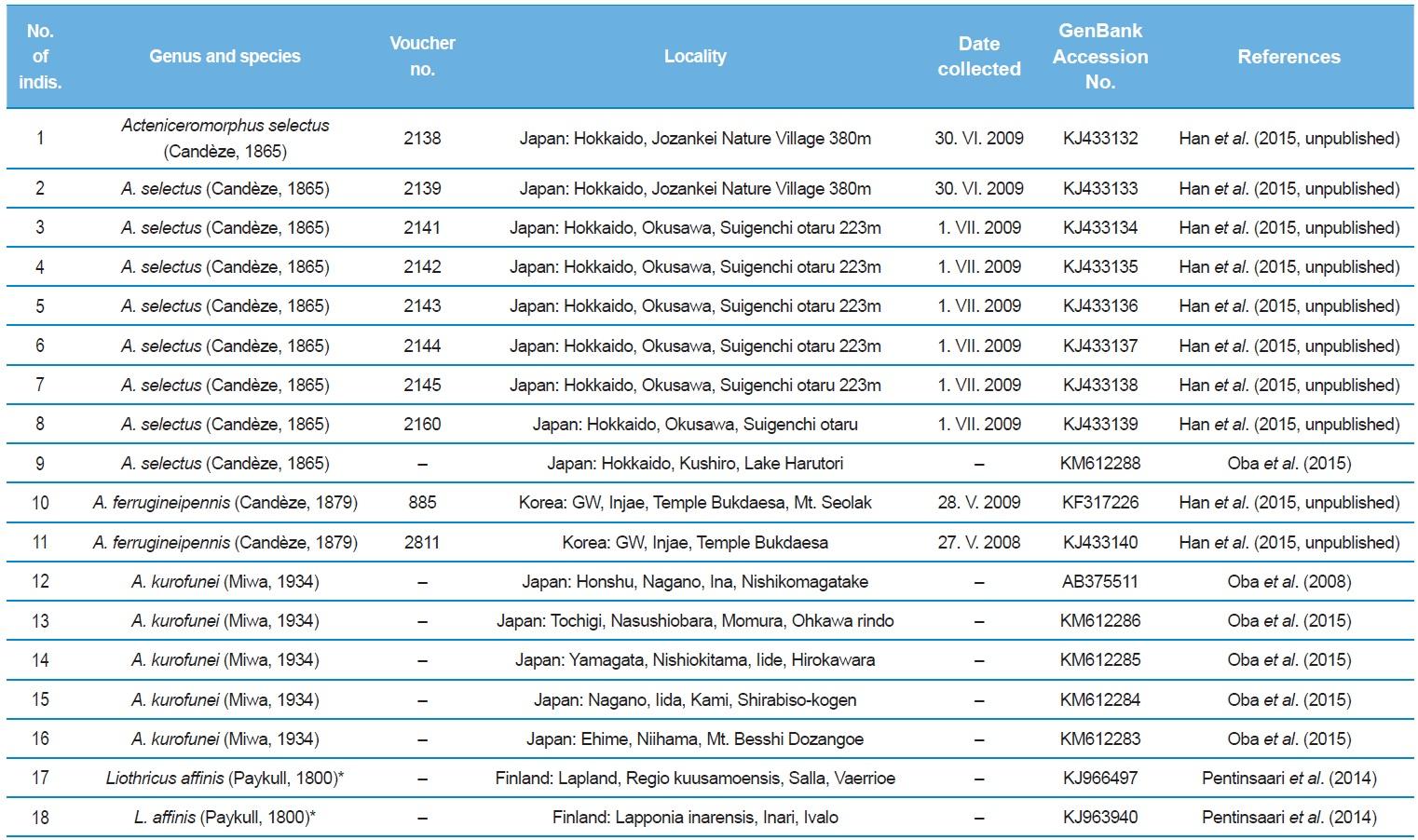 Key to species of the genus Acteniceromorphus in Korea 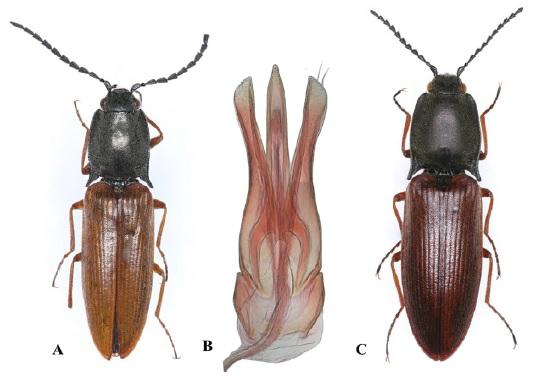 Specimens examined. A total of 16 individuals:

Distribution. Korea (new to fauna) and the Russian Far East.

Remarks. This species is recorded in Korea for the first time and usually collected mountainous area in Korea.

Specimens examined. Any Korean specimen of A. chlamydatus is unavailable in this study.

Remarks. The species is an endemic species to Japan occurring from Honshu, Shikoku and Kyushu. We could not examine the presence of the species in the Korean fauna and the further study is needed for this species.

Specimen examined. Any Korean specimen of A. selectus is unavailable in this study.

Specimen examined. Any Korean specimen of A. fulvipennis is unavailable in this study.

Remarks. The first Korean record of the species by Kim (1981) was a misidentification of H. oblongus Solsky. Therefore, A. fulvipennis is proposed to be excluded from the Korean fauna. Ôhira (1973) provided taxonomic information in detail.

NJ tree (Fig. 2) for 16 COI sequences of three ingroup taxa of Acteniceromorphus, except for A. chlamydatus, showed that each species was clustered as reciprocally monophyletic group with large interspecific genetic distance (range 7.2–10.5%). Therefore, we recognized that three species of Aceteniceromorphus have well defined species-level identification in DNA barcode as well as morphology. This information will be helpful to rapid species identification of them, not confuse as in the previous faunistic surveys based on morphology. 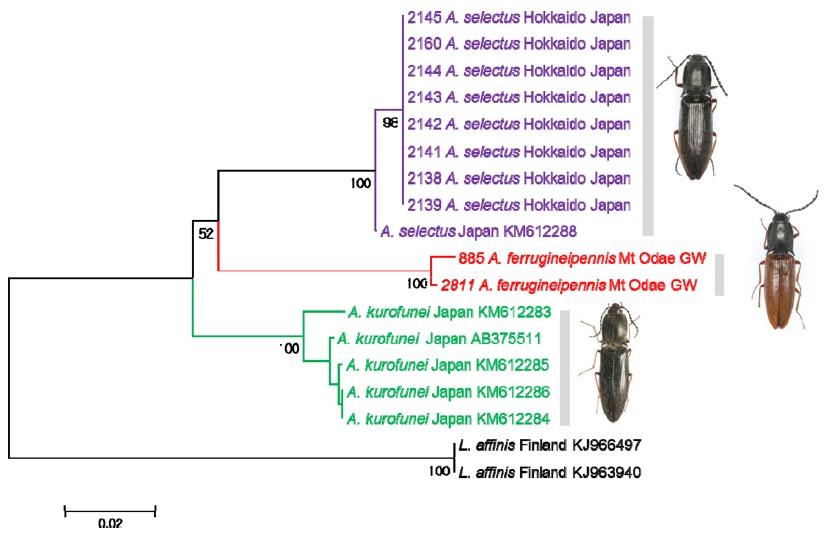