This paper addresses the problems of using anti-freeze lubricants for different machines that must function at extremely low temperatures during winter operation in the Republic of Sakha (Yakutia). We discuss the possibility of obtaining anti-freeze base oils from Talakan crude oil, an area with major oil and gas deposits of the Republic of Sakha, and also provide the trade and technological classification of Talakan crude oil. We propose two different schemes for processing Talakan crude oil: the fuel scheme (obtaining light and heavy fractions as a fuel oil) and the base oil scheme (obtaining light fractions and base oils). We investigate the influence of pour point depressants on alkyl-methacrylate base on the low-temperature properties of the fractions obtained from Talakan crude oil and Korean base oils, and establish the optimal concentration of pour point depressants. We compare the properties of these fractions with the low-temperature properties of Korean base oils and find that the commercial oil "Ravenol 0W-40" provides optimistic results. We obtain oil with a pour point of minus and a viscosity index greater than 100. The Design of Experiment was used to establish the optimum composition of the pour point depressants and the base oil S-8 to obtain lubricant oil with a kinematic viscosity of 17 cSt, viscosity index of 208, and a pour point of minus .

At present, the Republic of Sakha faces the task of developing the oil refining industry for production of high-quality motor fuels, lubricants, and raw materials for the chemical industry to develop its national economy [1, 2].

Creating anti-freeze lubricants from local raw materials is an important task, since the use of these lubricants would help resolve the problem of improving the reliability and durability of machines and mechanical devices in the extremely cold climates of the Republic of Sakha [3]. This republic needs to develop targeted technologies that are adapted to the chemical composition of Sakha crude oils for producing anti-freeze lubricants that are efficient at temperatures as low as −60℃.

Talakan oil and gas deposits were discovered in the Lensky region in 1984, and they are now the largest deposits in the Republic of Sakha (Yakutia). The deposit, which is 60 by 120 km in size, lies on the Talakan uplift in the most elevated domal part of the Nepa-Botuobiya Anteclise [4]. Oil from the Talakan field (in combination with other oils from Eastern Siberia) is served on the Eastern Siberia–Pacific Ocean (ESPO) pipeline [5], and is then exported from the port of Kozmino in the Asia-Pacific Region and the United States under the new brand, ESPO [6].

If distillate fuels from sour crude oil contain sulfur in relatively low quantities and the sulfur content meets the requirements for fuels of class 3 (sour crude), even if the sulfur content of the oil is more than 2%, this oil should be categorized as class 2. If diesel oil can only be obtained after dewaxing, the crude should be classified as sort 3. Conversely, if diesel fuel produced from the crude contains more than 6 wt.% paraffin but dewaxing is not required, this oil is categorized as sort 2 [7].

The crude oil code is its technological passport and determines the processing direction (for fuel or for base oil), the processes to which it is subjected (desulfurization, dewaxing), and the range of possible end products.

In 1921, the American Petroleum Institute developed a unit of measurement for the density of oil, termed API Gravity, which is presently used. The API Gravity at a temperature of 15.6℃ (60℉) and the Specific Gravity (SG) measured at 15.6℃ (60℉) are clearly linked via arithmetic equation (1) and can be readily interconverted:

At the Buhmwoo Institute of Technology (BIT), vacuum distillation was performed to obtain two fractions: 350-377℃ and 378-400℃. Furthermore, to reduce the pour points, the dewaxing process was conducted with a mixture of MEK:toluene (60:40 vol.%) in an oil and dewaxing mixture with a component ratio of 1:1.8 by means of freezing at −50℃. The physical properties of the obtained fractions of the base oils from the Talakan crude and base oils of Korean origin, Yubase-3, Yubase-4 (Group III base oils, Company SK-Lubricant) [11], and S-8 (Company S-Oil) [12], were measured using ASTM (American Society for Testing and Materials) methods. 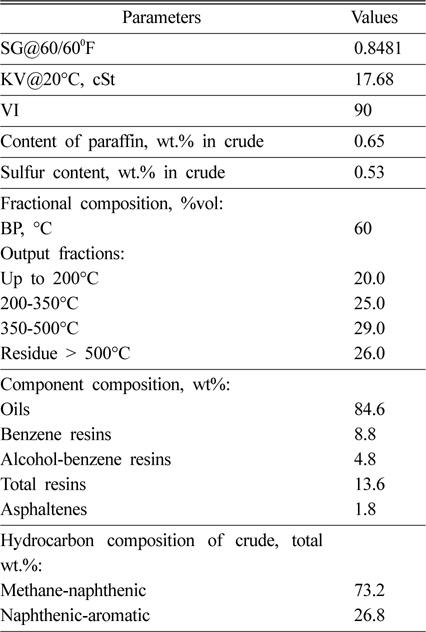 Table 3.Physicochemical properties of base oil fractions from Talakan crude and Korean base oils 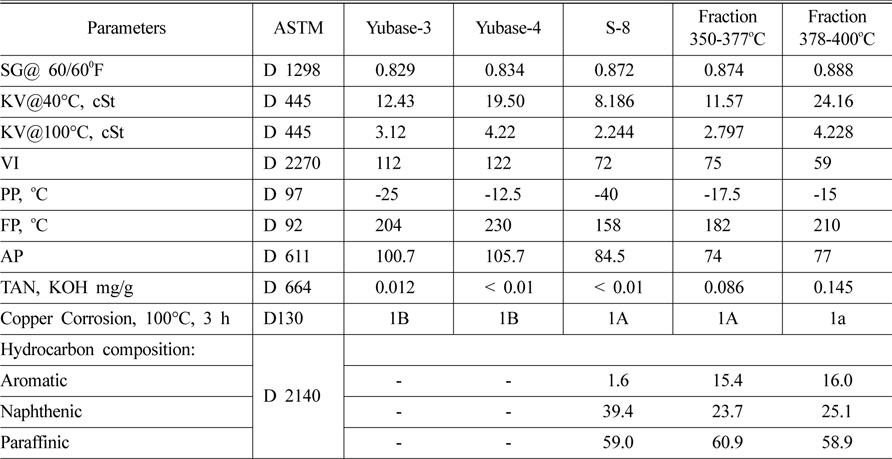 In order to improve the low temperature properties of Talakan base oils and Yubase-4, pour point depressants (PPDs) based on polymethacrylate with different molecular weights were used as additives; these are conventionally termed L PPD (Low), M PPD (Medium), and H PPD (High). The additives were dissolved in the base oil at 50℃ in quantities ranging from 0.5 to 4.0% by weight. Their pour points and kinematic viscosity at 40℃ and 100℃ were then determined, followed by determination of the viscosity index. The influence of the additives on the properties of the Talakan base oil and Yubase-4 is summarized in Table 4.

Table 4.The influence of depressant additive amount on pour point and Viscosity Index of base oils 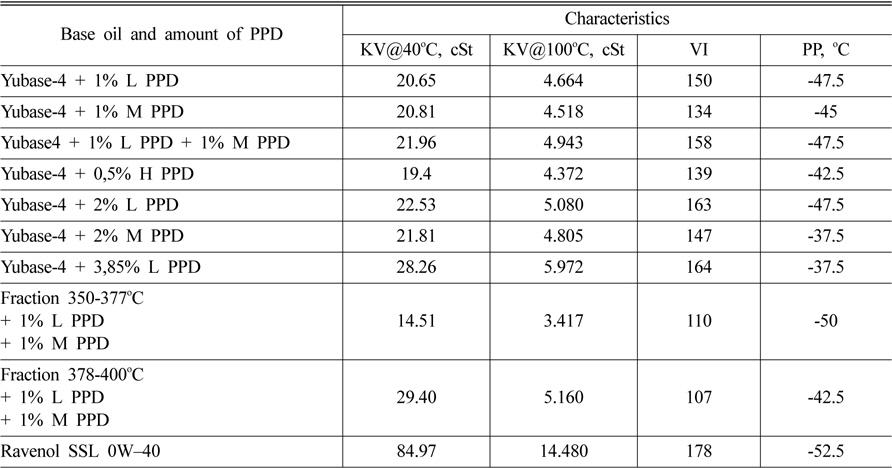 Thus, we have established the following optimal amount of depressant to be added to the base oil: 1 wt.% of L PPD and 1 wt.% of M PPD.

To obtain oil with a pour point below −60℃ as a base oil, the S-8 production of Company S-Oil with the lowest pour point was used.

To determine the composition and concentration of additives to achieve the greatest depression, the program Minitab was used to design an experiment based on the maximum content of a mixture of three different additives of up to 10 wt.% in the base oil. Fifteen samples were prepared, as shown in Table 5.

Table 5.Design of experiment for maximum depression of pour point of the base oil S-8 as a function of content of pour point depressant additives 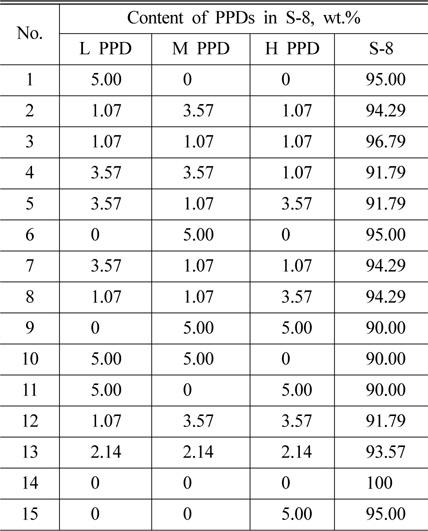 For each sample, the pour point, Kinematic Viscosity at 40℃ and 100℃, and the Viscosity Index were determined. The corresponding data are presented in Table 6.

Table 6.Physical characteristics of the samples 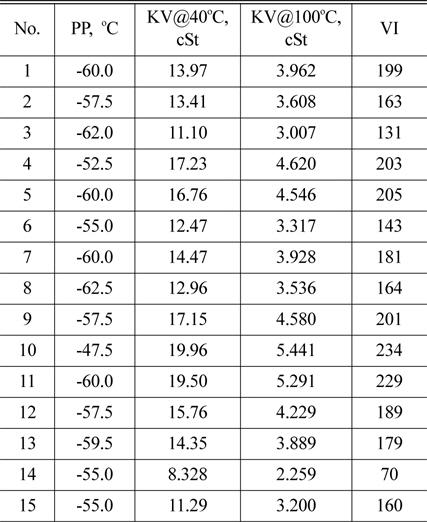 Using the experimental means of the factor analysis in Minitab (data from Table 6), we constructed a mathematical model based on the optimal ratio of depressant additives (5.0% L PPD and 2.13% H PPD) for oil with a predicted pour point equal to −75℃. Unfortunately, due to unavailability of equipment for measuring the pour point at such a low temperature, we could not perform this test. Additionally, the ratio of additives for oil with a predicted pour point of below −62.5℃, a Viscosity Index greater than 200, and an expected viscosity at 40℃ equal to 17 cSt was calculated. Samples were prepared in accordance with the calculated data, the measured viscosity at 40 and 100℃, and the Viscosity Index. The obtained kinematic viscosity and Viscosity Index (VI data) correlated well with the predicted results. However, the pour point of samples 16 and 17 were only −62.5℃. This was perhaps due to the low temperature limit of the device for determining the pour point (Table 7). 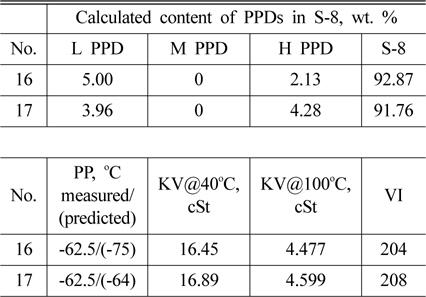 Lubricating oils with a pour point of −50℃ and a Viscosity Index of above 100 can be obtained from Talakan crude oil using the depressant additives L PPD and M PPD. The Viscosity Index may be increased after the removal of aromatic hydrocarbons through selective solvent purification or the hydrotreatment process.

It was also shown that lubricating oils with a pour point of below −60℃ can be obtained from the base oil S-8. Using the Design of Experiments method, the optimum composition for oil with a kinematic viscosity of 17 cSt, a Viscosity Index of 200, and a pour point of −64℃ was established.

Further research is required to reduce the pour point of Talakan base oil to −40℃ and establish the optimal concentration of additives by using the Design of Experiments approach.