Korean food consumption has increased sizably because of westernization and increasing national income. Owing to various and complicated social structures, Koreans have demanded more processed meat products as cooked and frozen foods (Koo et al., 2007). The output of domestic processed meat products increased considerably from 180,640 tons to 188,744 tons, but in 2012, it decreased by 153,946 tons (KMIA, 2013). The westernization of the Korean diet has increased the risks for obesity and disease. Therefore, modern eating habits increasingly reflect a preference for a health and wellness-oriented diet that includes low-fat, low-calorie, low-salt meals. In the past, the standard for food choice was simple nutrient intake to sustain life. Modern consumers have higher incomes and choose health-oriented foods and their demands for such foods have increased over time. Accordingly, meat-product manufacturers are developing new processing techniques and accepting a new nutrient system (Ballin, 2010; Biesalski, 2005; Weiss et al., 2010).

In general, the fat content of sausage is as high as 30%. Fat is a vital source of energy and essential fatty acids (Vural et al., 2004). It is also one of the three macronutrients the body requires and it has the key function of carrying fat-soluble vitamins (Mela, 1990). Fat in meat products also plays central roles in stabilizing meat emulsions, reducing cooking loss, improving water-holding capacity (WHC) and providing juiciness and hardness (Pietrasik and Duda, 2000; Yoo et al., 2007). However, foods with high animal fat content have high levels of saturated fatty acids and cholesterol. Diets high in animal fat may be associated with several types of obesity, hypertension, cardiovascular disease and coronary heart disease (Özvural and Vural, 2008). Therefore, consumer demand for healthier products is growing and has stimulated the development of meat products with reduced fat content and altered fatty acid profiles (JimCnez-Colmenero, 1996).

Compared with animal fats, vegetable oils are free of cholesterol and have a higher ratio of unsaturated to saturated fatty acids (Liu et al., 1991). Vegetable oils such as olive oil and canola oil have been used as partial substitutes for pork backfat in low-fat frankfurters and other cooked products (Pappa et al., 2000; Park et al., 1989). Because vegetable oils differ considerably in their physical properties such as color, flavor, free fatty acids and fatty acid composition, different oils could have different effects on the quality characteristics and nutritional value of meat products. Vegetable oil has been used to extend the shelf life of several food products, including pork patties. However, effect of replacing animal fat with vegetable oil mixtures on the quality of sausages remains to be fully studied. Therefore, this study was conducted to evaluate effect of replacing pork fat with vegetable oil mixture on the quality properties of emulsion-type pork sausages. 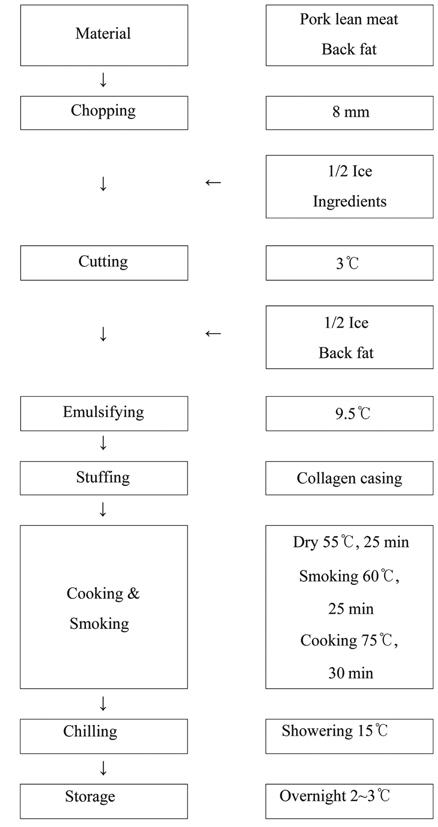 Moisture, protein, lipid, and ash were assayed using the methods of the Association of Official Analytical Chemists (1995).

A homogenizer (Nihonseiki, Tokyo, Japan) was used to homogenize 10 g of sample in 100 mL of distilled water for 30 s at 7000 rpm. The pH level of the homogenate was determined using a pH meter (Mettler Delta 340; Mettler- Toledo, Ltd, UK).

The centrifugation method described by Laakkonen et al. (1970) was used to measure WHC. Emulsion-type pork sausage samples (0.5 ± 0.05g) from each treatment group were placed in individual centrifugation tubes with filter units, heated for 20 min at 80℃, and cooled for 10 min. Samples were centrifuged at 2000 g for 10 min at 4℃, after which WHC was calculated as the change in weight for each sample.

A 3-cm-thick slice (weight 100±5 g) of emulsion-type pork sausage from each treatment group was placed in a polypropylene bag, cooked for 40 min at 7℃ in a waterbath, and cooled to room temperature. Cooking loss was calculated as the weight difference of samples before and after cooking.

Freeze-dried samples (0.3 g) from each treatment group were homogenized with 12 mL of chloroform : methanol (2:1) Folch solution and let stand for 24 h at 4℃. Then, 10 mL deionized water was added and mixed well, and the samples were centrifuged at 3000 g for 20 min 4℃. The lower phases of the centrifuged samples were removed using a syringe and placed in a fume hood for 24 h. After complete evaporation, 1 mL glacial acetic acid was added to the samples and vortexed for 30 s. O-phthalaldehyde reagent (2 mL) and 1 mL H2SO4 were added to 0.1 mL vortexed sample and vortexed for 30 s. After 10 min, the absorbance was measured with a spectrophotometer (Optizen-3220UV, Mecasys, Korea) at 530 nm. A standard curve described through 10, 20, 30, 40, and 50 mL cholesterol standard stock solution and 40, 30, 20, 10, and 0 mL, respectively, of glacial acetic acid mixed solution was measured using the above procedure. And regression equation was obtained. Cholesterol content (mg/100 g, dry wet) was calculated using the following equation: Measured amount by standard curve × addition of glacial acetic acid × diluted rate × total lipid weight (mg) / sample weight.

A 3-cm-thick slice (weight 100±5 g) of emulsion-type pork sausage from each treatment group was placed in a polypropylene bag, cooked for 40 min at 70℃ in a waterbath, and cooled for 30 min. Samples were cut into 1 × 1 × 1 cm (width × length × height) pieces for a double compression cycle test. Texture profile testing was performed using a Rheology Data System version 3.0 and a rheometer (Model Compac-100; Sun Scientific Co., Japan) with a table speed of 60mm/min and a load cell (max) of 4 kg.

Total lipid was extracted with the Folch (1957) method. Samples were methylated in a water-bath at 100℃ for 1 h according to the method of Lepage and Roy (1986). After cooling, the samples were added to hexane, and the top layer was removed. Separation and quantification of fatty acid methyl esters was carried out using a gas chromatograph (HP 5890II; Hewlett Packard Co., USA) equipped with a capillary column (100 m × 0.25 mm internal diameter × 0.20 μm film thickness). Nitrogen was used as the carrier gas, and the oven temperature was initially held at 180℃, then raised to a final temperature of 240℃ (2℃/min). The injector and detector temperatures were maintained at 250℃.

Statistical analyses were carried out using the generalized linear model procedure of the SAS package (release 9.01, 2002). Means were compared using Duncan’s multiple range test at a level of significance of p<0.05.

The result of the proximate analysis of emulsion-type pork sausages in which vegetable oils were substituted for pork fat are shown in Table 2. Significant differences among sausage samples were observed for all measured components (p<0.05). Moisture, protein, and ash were decreased by the addition of mixed vegetable oils, whereas fat content was increased. According to Lee and Kim (1986), pork backfat is composed of 16.09% water, 80.00% fat, and 4.20% protein. Therefore, the moisture and protein contents in emulsion-type pork sausages processed with pork fat were thought to be higher than those of sausages processed with mixed vegetable oils. However, this finding was not confirmed by the results of other studies of pork sausage in which pork fat was replaced with vegetable oils (Bloukas et al., 1996; JimCnez-Colmenero et al., 2010; Koo et al., 2009).

The results of the comparative texture profile analysis of emulsion-type pork sausages in which pork fat was replaced with vegetable oil are shown in Table 4. Among all treatment groups, Hardness, cohesiveness, springiness, and chewiness values were highest in T1 (p<0.05). This result was obtained that fat content in T1 is significantly lower compared with other treatment groups. It was equal to report of Jung et al. (1998), which the less fat content, the higher hardness of meat products. Among the treatments with mixed vegetable oils, T4 had texture property values higher than those of T3, T5, and T6 (p<0.05). Jim- Cnez-Colmenero et al. (2010) reported that the texture property values of frankfurter sausages containing emulsified olive oil were significantly lower than those of sausages containing pork fat (p<0.05). These results were similar to those of other studies (Baer and Dilger, 2014; Choi et al., 2010; Park et al., 2005).

The results of the sensory evaluation of emulsion-type pork sausages in which pork fat was replaced with vegetable oil are shown in Table 5. Treatment without addition of the vegetable oil was higher score in saltiness, flavor, and total acceptability compared to the other treatments (p<0.05). Among the treatments with mixed vegetable oils, the more content of olive oil, the lower score in flavor and total acceptability. These results were agreed with the report of Bloukas et al. (1997) which has negative effects on sensory characteristics by addition of olive oil.