Cognitive Radio (CR) enables efficient use of a limited spectrum by allowing secondary users (SUs) to access licensed frequency bands of primary users (PUs) [1], [2]. Spectrum sensing is a key element to allow SUs to use a vacant frequency band in a CR network. Because of noise uncertainty, however, the performance of the traditional detectors is rapidly deteriorated at a low signal-to-noise ratio (SNR). The current prevailing spectrum sensing schemes are an energy detection-based scheme, a cyclostationary-based scheme, a matched filter-based scheme, and an entropy-based scheme [3], [4].

Many researchers have endeavored to increase the sensing performance of the detectors in CR networks. Some researchers have increased the spectrum sensing performance of the energy detector by adjusting parameters such as decision thresholds, sensing frequency, and the number of sensing operations [5]-[7]. Cooperative spectrum sensing can increase the PU detection performance by combining the sensing information from several SUs [2], [8]. The newly developed entropy-based spectrum sensing scheme generally outperforms the other spectrum sensing schemes [9]-[13]. In information theory, entropy is a measure of the uncertainty associated with a discrete random variable. The term usually refers to Shannon entropy [14]. The authors of [9] introduced an entropy-based approach for PU detection with uncertainty in noise and presented a likelihood ratio test for detecting a PU signal. To counteract the effect of noise uncertainty at a low SNR, the authors of [10]-[12] investigated an entropy-based spectrum sensing scheme in the frequency-domain. Estimating entropy in the time domain does not provide good performance under a low SNR, because the estimated entropy value is a constant regardless of the existence of PUs at a low SNR while the entropy can be estimated in the frequency-domain even at a low SNR. These studies identified the state of a PU solely from the current detected data set. The authors of [13] presented a new cross entropy-based spectrum sensing scheme that has two time-adjacent detected data sets of the PU. This scheme showed an enhanced discriminating ability due to the consideration of more information of the PU signal. The previous works approaches described in [9]-[13], on the other hand, showed the sensing performance in the CR network without the presence of an unauthorized user (UU), where the UU is known as a PU emulation attacker (PUEA). The PUEA emits a signal with a similar form to that of the PU so as to deter access to vacant channels by other SUs [15]. Several approaches have been studied to combat PUEAs. A location-based defence technique was employed in which a number of sensing nodes are deployed to pinpoint PUE attacks [16]. A cooperative spectrum sensing technique, where the existence of a PUEA in a CR network is considered, has been proposed wherein several SUs report the detected signal to the fusion center and the fusion center then calculates the decision statistic [17], [18]. However, the works of [15]-[18] fail to increase the detection performance of each SU because they employ the conventional energy detector.

We consider a CR network with PUs and SUs along with an UU that influences the CR network, as shown in Fig. 1. The UU is assumed to be an attacker who is malicious and does not belong to the CR network. In the spectrum sensing period of each time slot, the UU may generate a PU emulation signal in order to deceive SUs. An UU has ability to mimic the behavior of the PU and therefore the unauthorized signal shows similar properties to a primary signal. 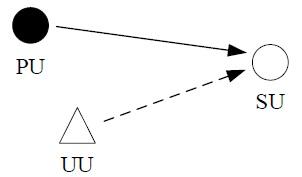 Fig. 1.A CR network with an UU

We consider a frequency bandwidth BW, with central frequency fc and sampling frequency fs. Each SU senses the signal during N samples. The signal received by SUs at the nth sample is

where s(n) is the primary signal, z(n) is the unauthorized signal, and w(n) represents background noise, which follows a Gaussian distribution and N is the sample size. α and β are binary indicators, where α = 1 or β = 1 indicates the presence of the PU or UU and α = 0 or β = 0 implies their absence.

From the Wald’s sequential probability ratio test (SPRT), we can specify the desired thresholds λ1 and λ2 for the false alarm and miss detection probabilities, respectively. The space of all observations is the sample space of the received power measured at the SU. Let the sequence of the measured power at the SU for N samples be denoted by {x1, x2, ⋯, xN}, where xn is the measured power at the nth sample. According to the Wald’s SPRT, we can decide which hypothesis is correct [19]. The SPRT is based on considering the likelihood ratio as a function of the number of observations. After N samples, the likelihood ratio (LR) is given by [20]

where K, which is the DFT size, is equal to the sample size N; the parameters, represent the complex spectrum of the received signal, the primary signal, and the background noise, respectively. Hence, in the frequency-domain, we have the following hypotheses:

The complex spectrum of the received signal can be expressed as follows [11]:

where Yr(k) and Yi(k) represent the real part and the imaginary part of respectively. The spectrum magnitude can then be expressed as

Fig. 3.A block diagram of the conditional entropy-based frequency-domain detector

A number of schemes have been proposed by earlier researchers for estimating the entropy of a continuous random variable based on a finite number of observations [10], [11], [14]. To reduce the computational complexity, we use the simplest approach, histogram-based estimation of the density function. The histogram-based method estimates the probability of each state. Let Y and Z represent the distribution of the spectrum magnitude of the measured signal in the presence of a primary signal and in the presence of an unauthorized signal, respectively. We divide the range of Y and Z into Ly bins and Lz bins, respectively. Hence, the bin widths are Δy = Ymax / Ly and Δz = Zmax / Lz, where Ymax and Zmax denote the maximum value of the random variables, Y and Z, respectively. The probability mass function can then be approximated as the frequency of occurrences in each bin width. Hence, we have p(y) ≈ ky / N and p(z) ≈ kz / N , where ky and kz are respectively the total number of occurrences in the yth bin of Y and in the zth bin of Z; N is the number of observations. As described above, a SU can estimate the distribution of Y based on the observations of the received signals. However, in practice, it is difficult to estimate the distribution of Z without the help of the primary system or without the location information of UUs. Some works analytically derived a distribution of unauthorized signals when UUs are uniformly located in a cell [20], while other works assumed that the channel information, both for the PU and for the UU, can be obtained [17]. In this paper, we assume that a primary system has a periodic duration for the pilot transmission or the silence. A SU can then receive unauthorized signals for every the periodic duration and it may estimate the distribution of Z based on the cumulative observations of the unauthorized signals.

3.2 Spectrum Statistics of the Received Signal

In hypothesis H0, the received signal, y(n) = w(n), consists of noise. Both the real part Wr and the imaginary part Wi of the spectrum follow a Gaussian distribution. Hence, follows a Rayleigh distribution with the parameter σy, and the differential entropy of Y can be expressed as [10], [14]

where γ is the Euler-Mascheroni constant.

Proposition 1. The mutual information of entropy reduces the uncertainty of the primary signal due to the knowledge of the unauthorized signal. With a fixed bin number, Lz, the entropy of the spectrum of WGN can be approximated by a constant; the proposed spectrum sensing technique on the basis of the mutual information is hence intrinsically robust to noise uncertainty.

Proof. The maximum values of Y and Z, Ymax and Zmax, can be expressed as Ymax = Cyσy and Zmax = Czσz, respectively, where Cy and Cz are constant values [10]. The bin width can then be expressed as Δy = Ymax / Ly = Cyσy / Ly and Δz = Zmax / Lz = Czσz / Lz, respectively. If the density f(y) of the random variable Y is Riemann integrable, then the entropy of the quantized version H(YΔ) is [14] 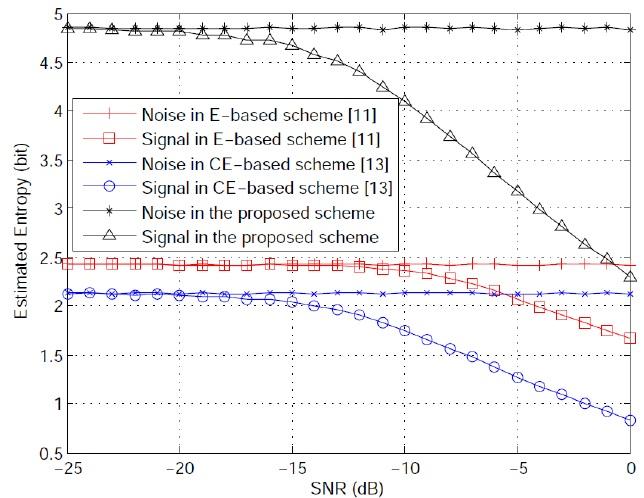 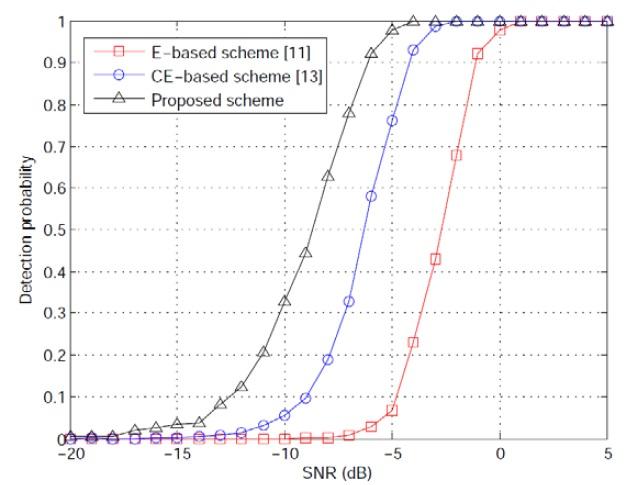 Fig. 5.Comparison of detection probability in the Gaussian channel 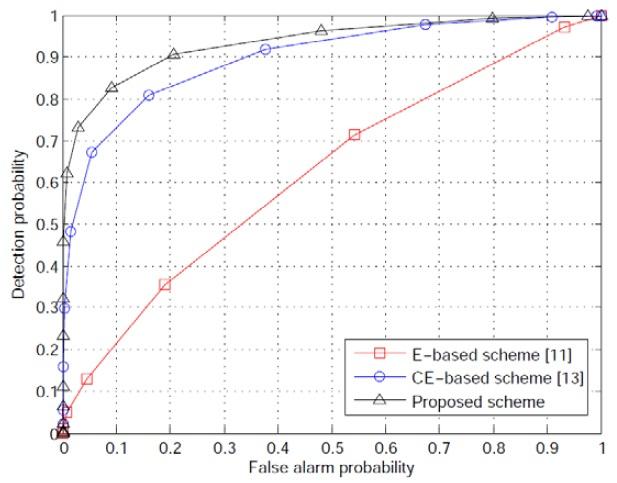 Fig. 6.Comparison of ROC curves in the Gaussian channel when SNR = -10 dB

Fig. 7, 8, and 9 show the performance of the spectrum sensing schemes under the Rayleigh fading channel environments. The primary signal is a single sideband signal, which is assumed to experience deep fading such that the magnitude follows a Rayleigh distribution when the delay time of each path is 0.01 seconds and the number of the paths is 15. 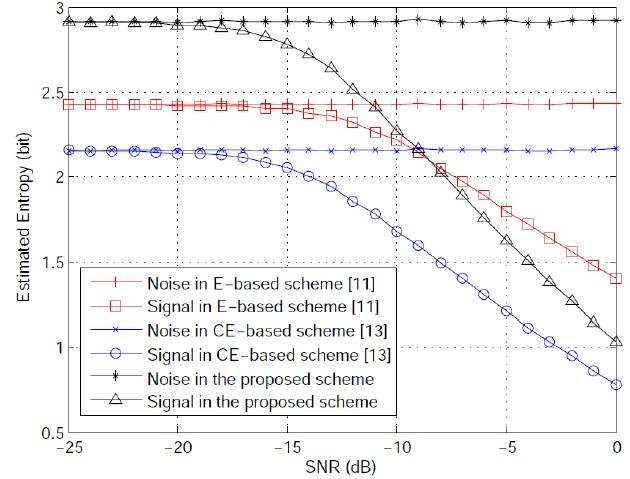 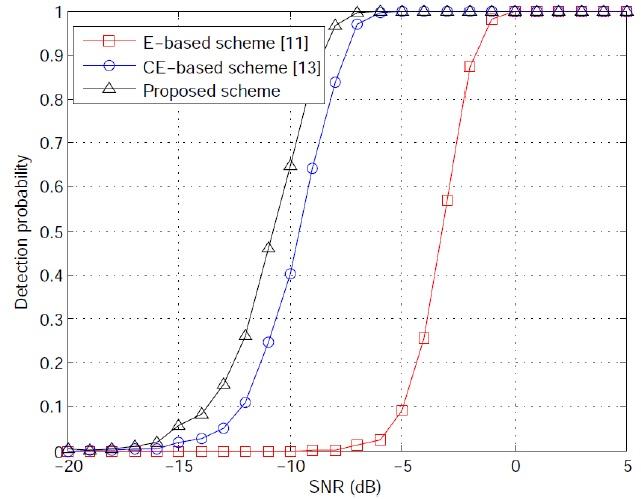 Fig. 8.Comparison of detection probability in the Rayleigh fading channel 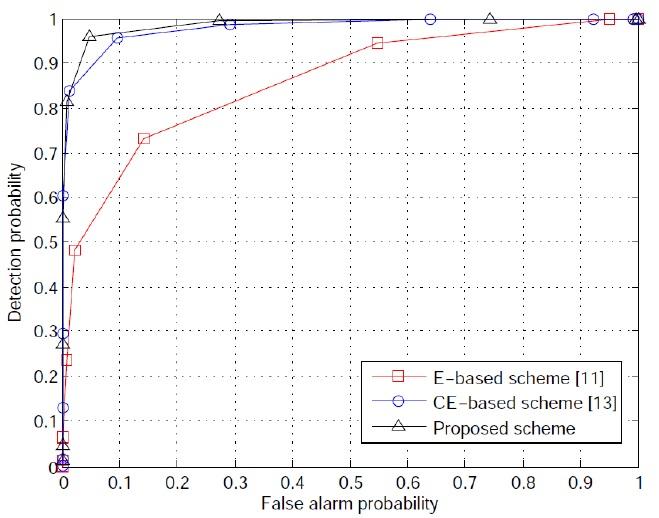 Fig. 9.Comparison of ROC curves in the Rayleigh fading channel when SNR = -10 dB

As shown in Fig. 7, the proposed spectrum sensing scheme shows better performance than the previous spectrum sensing schemes of [11], [13] under a Rayleigh fading channel. Superior performance in discerning signals from noise requires a greater gap between the noise and the signal regardless of the value of the estimated entropy. At any SNR value, the proposed scheme possesses higher gaps than others. For example, the distance between the noise and the signal of the estimated entropy is about three times greater than that of [11] and twice that of [13] at a SNR of -10 dB.

Fig. 9 shows that the detection ability of the proposed scheme is more robust than that of the conventional entropy-based schemes. By selecting a SNR = -10 dB, we have simulated the ROC curves in a Rayleigh fading channel. This figure shows that the detection probability of the proposed spectrum sensing scheme is better than that of [11], [13] when the false alarm probability is identical.