Journal of the Optical Society of Korea

Nowadays, various kinds of commercial three-dimensional (3D) display are proposed to provide different left-eye and right-eye images separately to the corresponding eye of the observer [1-2]. Since the disparity between the perceived images from different views is one of the most important cues which induce the 3D perception to the observer, it is essential to establish an optically perfect isolation between those views for the realization of 3D display with a low level of visual fatigue. However, due to the limitations of the current isolating method, some portion of light rays from the other view is mixed with the current view. This phenomenon is called 3D crosstalk [3, 4]. 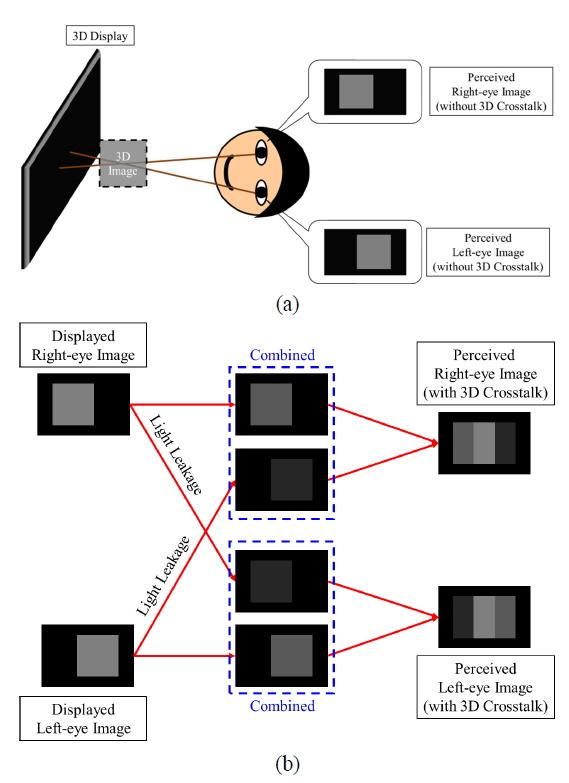 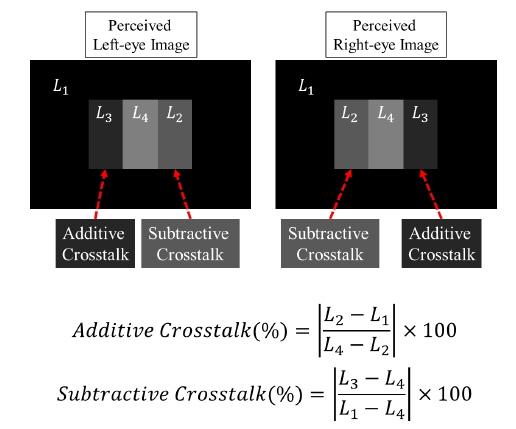 FIG. 2.The appearance of additive/subtractive 3D crosstalk and equations to calculate them.

As described above, the purpose of our research in this paper is to compare and to analyze the influences of the additive 3D crosstalk and the subtractive 3D crosstalk on the level of visual fatigue. In order to analyze and to compare those influences, we need to consider the following two issues. The first one is the nature of visual fatigue. Since visual fatigue is subjective and personalized, it is hard to compare the level between different subjects by using a question-based investigation, which is commonly used. In other words, even if different observers score the same, it is hard to conclude that the same scores indicate that those observers feel the corresponding levels of visual fatigue because some prejudices or preferences of each observer could affect the result. The other thing that should be considered is the difficulty of controlling the 3D crosstalk using current 3D products. Since the 3D crosstalk is typically related to the properties of optical structure to separate the left-eye and the right-eye images, it is commonly necessary to change those properties to control the level of 3D crosstalk, which is a complicated process. In addition, the differences between optical structures to realize the autostereoscopic 3D displays also affect the responses of the observers who compare them. As a result, it is necessary to realize an experimental setup which can independently control the level of 3D crosstalk without changing the other optical parameters, in order to analyze the influence on the visual fatigue caused by the 3D crosstalk alone.

As a candidate for a solution to resolve the above issues, we propose a method based on a mirror stereoscope shown in Fig. 3. The mirror stereoscope is composed of two display modules and a folded front-surface reflection mirror, which prevents a doubled image due to reflections at external and internal surfaces [10-12]. Since the path of the light rays from the left-display and the right-display are optically separated by the mirror as shown in Fig. 3, the left-eye and the right-eye of the observer can see the optically isolated images on the left display and the right display panel through the reflections on the left side and the right side of the folded mirror, respectively. Therefore, it is possible to realize an autostereoscopic 3D display with no 3D crosstalk using the mirror stereoscope. 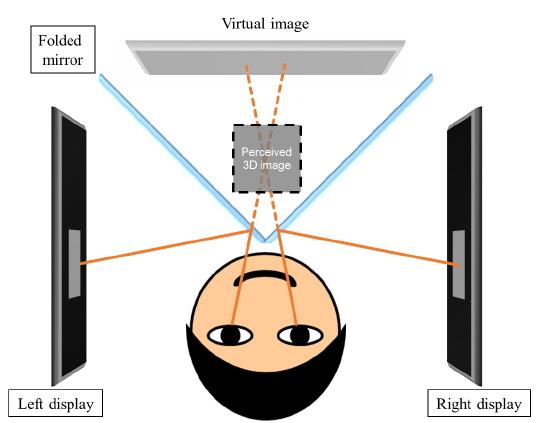 FIG. 3.The structure and principle of a mirror stereoscope.

FIG. 4.The emulation of 3D crosstalk using the mirror stereoscope. 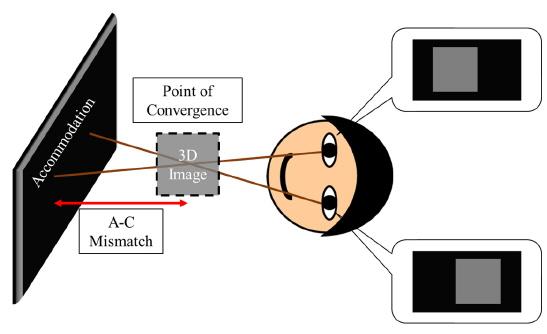 FIG. 5.The concept of A-C mismatch. 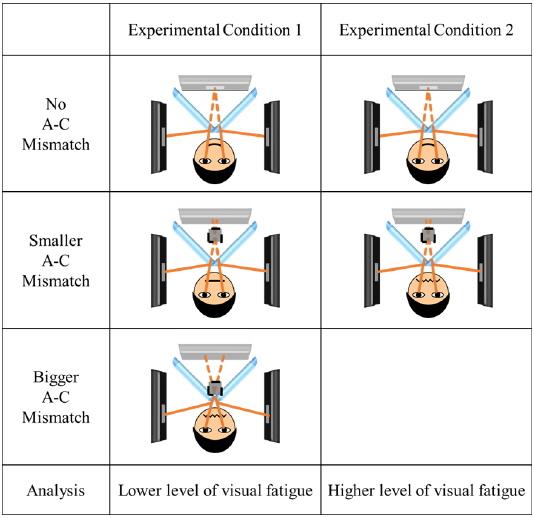 FIG. 6.The relation between the maximum endurable level of A-C mismatch and the level of visual fatigue the observer feels.

Since the purpose of our experimental method is to prevent the experimental results from being affected by personal prejudices or preferences, we have provided criteria to make the observers judge the maximum endurable level of A-C mismatch not by their own rules, but by a common rule provided by the guidelines. The first one is the appearance of doubled (separated) images. Since the doubled images mean that the observer failed to fuse the left-eye and the right-eye images into a 3D image, it can be used as an indicator that the observer has reached the maximum endurable level of A-C mismatch. Another criterion is the appearance of a blurred 3D image which means that the observer could not recover the focus no matter how he/she tried. Since the accommodation (focal point of observer’s eye) is at the position of the display screen, the observers found it hard to focus the 3D image as the A-C mismatch increased. Therefore, the blurred 3D image can be thought of as another indicator that the A-C mismatch is beyond the level of the observer’s control. Using those criteria, experimental results based on a common rule of decision can be acquired.

In order to verify our assumption about the experimental condition above, we referred to the ‘3DTV Broadcasting Guideline’ published by TTA (Telecommunications Technology Association) of South Korea in 2013 [13]. In the guideline, the symptoms in which the observers see a doubled image or a blurred 3D image are categorized as kinds of visual fatigue. Therefore, based on the guideline, when the observers in our experiments are in a similar situation with the above symptoms, we can assume that they started to feel visual fatigue, even though the observing time is not so long.

In the subjective experiments, two 22-inch LCD panels with 8-bit grayscale (256 steps) are used to realize the mirror stereoscope shown in Fig. 7. The distance between the observer and the virtual images formed by the reflection at a folded mirror is set to be 745mm. Then, we use a luminance meter to measure the relation between the grayscale and the luminance of the LCD panel as plotted in Fig. 8. From that relation, the emulated levels of each kind of 3D crosstalk are defined as in Table 1. In our experiments, since the grayscale-luminance relation has a non-linear curvature as shown in Fig. 8, the density of emulated levels of the additive 3D crosstalk in Table 1 is much higher than that of the subtractive 3D crosstalk. 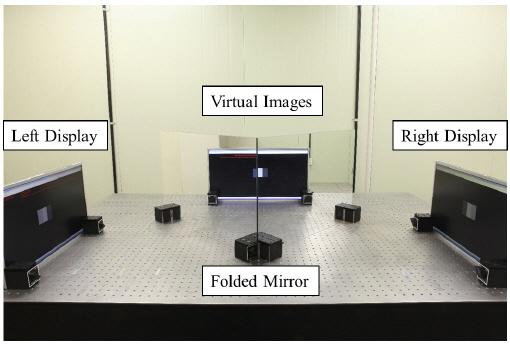 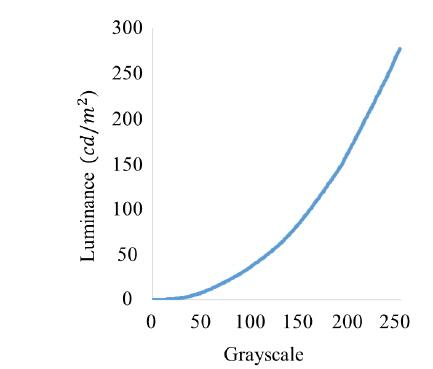 FIG. 8.The relation between the grayscale and the luminance of the LCD panels used in the experiments.

TABLE 1.The emulated level of the additive 3D crosstalk along the level of grayscale 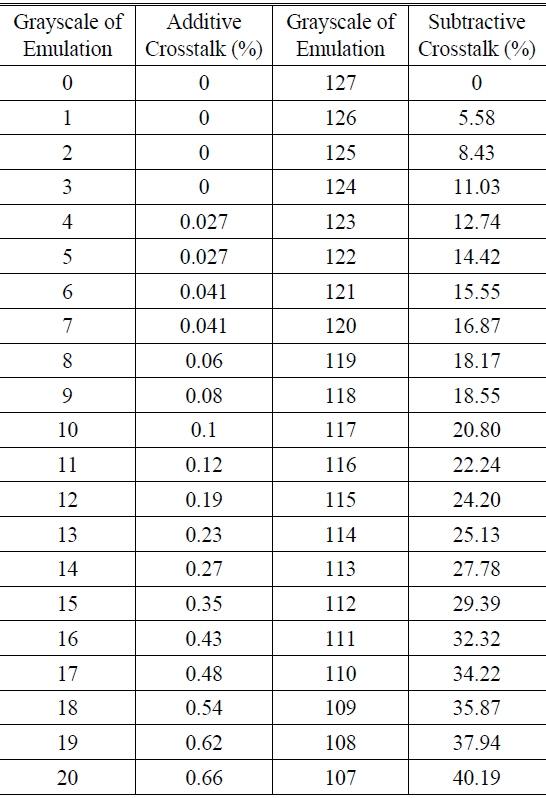 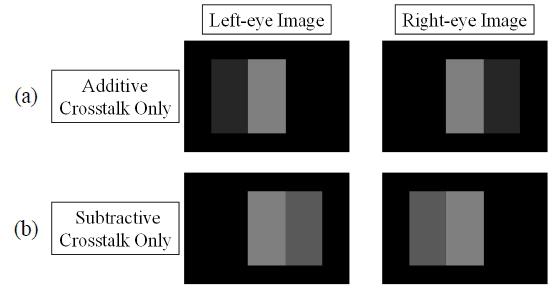 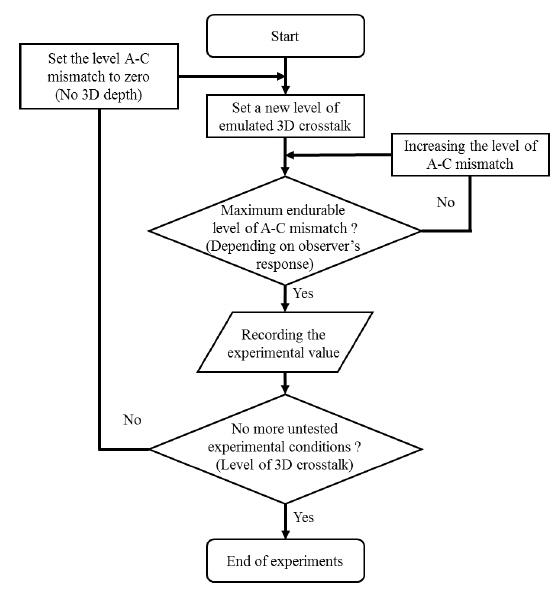 FIG. 10.A flowchart to show the experimental procedure. 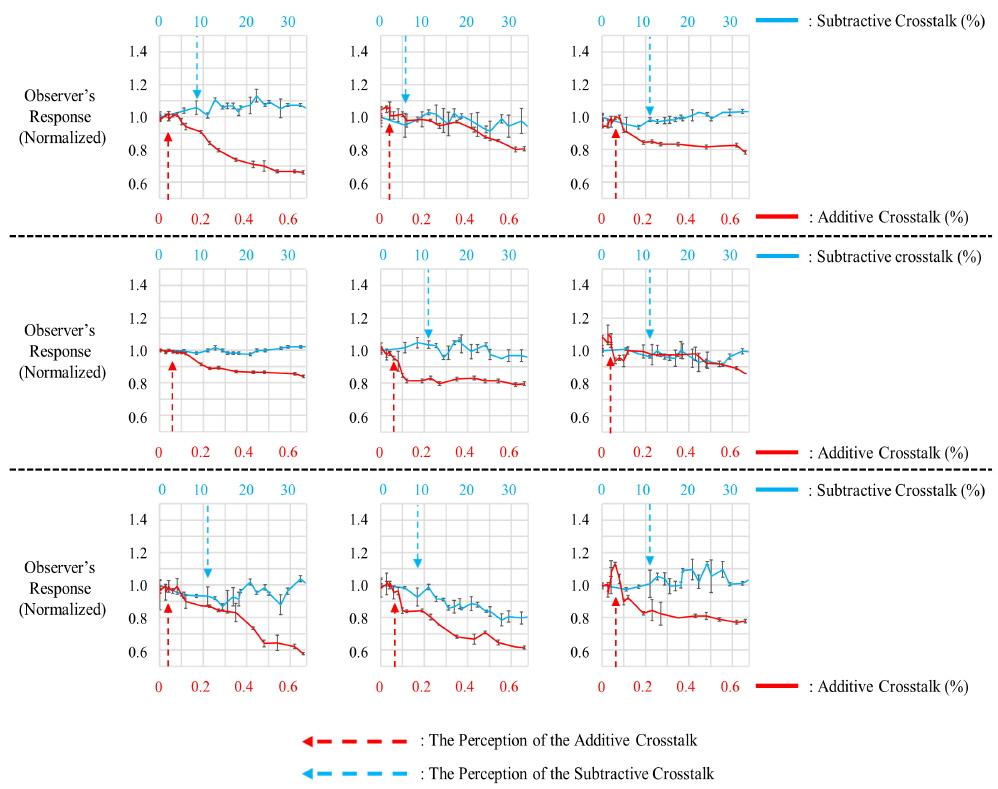 FIG. 11.The experimental results of nine observers, showing the response of the observers for additive/subtractive 3D crosstalk. 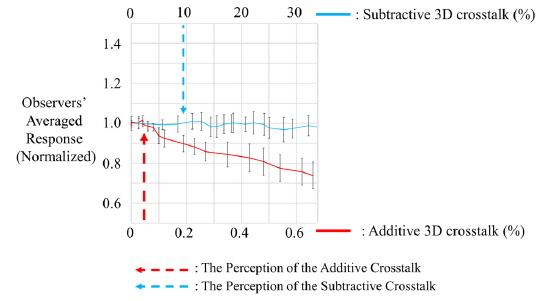 FIG. 12.The average responses of nine observers to the additive/subtractive 3D crosstalk.