The oral environment provides favorable conditions for the proliferation of bacteria, where pathogen infection may cause dental caries by creating an acidic environment and biofilm around teeth and gums (1).

Numerous types of bacteria are associated with tooth decay, and the most prominent one among these is Streptococcus mutans. Research into the relationship of S. mutans growth and dental caries has progressed steadily (2) since its initial description in 1924 (3). S. mutans is a gram-positive, coccoidal, and aciduric bacterium (3) that achieves critical pH with unusual rapidity (4). S. mutans produces three genetically distinct glycosyltransferases: GtfB, GtfC, and GtfD (5). These Gtfs play an important role in the formation of dental plaque, such as in the absorption of various oral microorganisms to the dental surface and cohesion of the enamel and plaque (5, 6). Owing to these characteristics, S. mutans is most often found on dental surfaces prior to the formation of a cavity (7). Consequently, S. mutans has been used as an indicator for cariogenic biofilm in the diagnosis of dental caries (1, 8).

The prevalence of pathogens that cause dental caries can be successfully reduced through effective strategies such as tooth-brushing, inter-dental cleaning, and the use of commercial antimicrobial mouthwashes (11). Daily use of mouthwashes is recommended for proper oral hygiene (12). Mouthwashes contain various antibacterial agents such as cetylpyridinium chloride (CPC) and essential oils (EO) (13). Mouth-rinsing was first described in Chinese medicine in 2700 B.C as a folk remedy (14). Since the 1960s, the scientific record of antimicrobial mouthwashes has been well documented (15, 16). The effectiveness of antibacterial agents has been discussed elsewhere (13, 17-22).

The aim of this study was to examine the antibacterial activity of four commercial mouthwashes available in South Korea against S. mutans by evaluating colony reduction using both biofilm and planktonic methods.

This study was performed to compare the antimicrobial activity and efficacy of commercially available mouthwashes in South Korea as well as ethanol solutions (10% and 20%) against S. mutans colony reduction. S. mutans cells exhibit various shapes depending on their microenvironments such as with biofilm-attaching cells at the tooth surface and planktonic cells in an oral environment (23, 24). Mouthwashes must possess antibacterial activity against both biofilms and planktonic cells. Therefore, we used biofilm and planktonic methods to investigate the reduction of viable cells elicited by the action of the mouthwashes.

The biofilm method showed that the reduction of biofilm cells exposed to the four commercial mouthwashes, as well as the ethanol solutions (10% and 20%), for 30 s ranged from 0.05-5.54 log when compared with the negative control (Table 1). All data demonstrated a statistically significant reduction in bacterial colonies (A-D, F: P ≤ 0.001; E: P ≤ 0.01). Among the tested mouthwashes, bacterial colony reductions in formulas B, C, and D did not exceed 1-log reduction (range, 0.08-0.54 log [P ≤ 0.001]). However, formula A displayed the highest antimicrobial activity, beyond 5-log reduction (P ≤ 0.001), indicating complete removal of S. mutans (Fig. 1). Formulas E and F displayed an approximate 0.05-log reduction (P ≤ 0.01). Fig. 1 shows the log CFU/ml of S. mutans after treatment with each formulation for 30 s using biofilm methods. 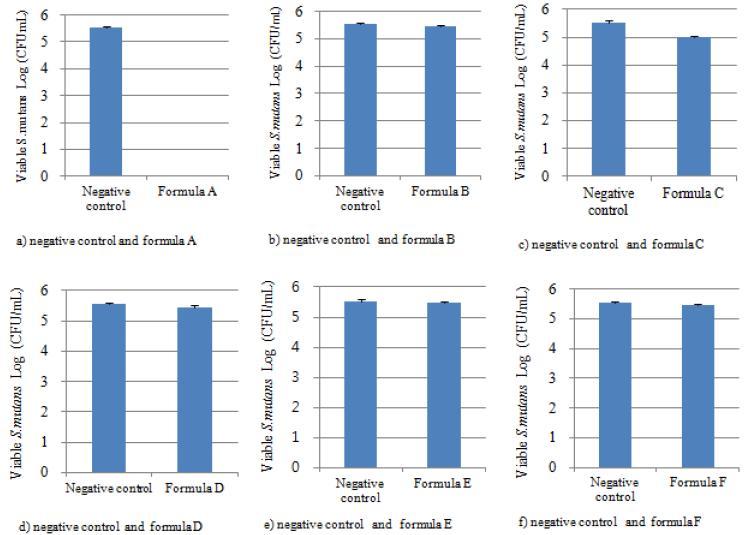 Mouthwashes consisting primarily of chemotherapeutic agents have antibacterial effects on oral microorganisms (25). These components include chlorohexidine, CPC, sodium fluoride (NaF), and ethanol (25). In the present study, formula A (0.02% NaF and 0.05% CPC) demonstrated significantly greater antibacterial effects (5-log reduction; P ≤ 0.001) than the other formulas. Between the two agents, CPC was determined to be the more effective antimicrobial agent, since CPC was present exclusively in formula A, whereas NaF was also present in formulas B and D (0.02%).

CPC is freely soluble in water and organic solvents such as chloroform, alcohol, and acetone (19). With a positive charge and a single aromatic ring, it is an amphiphilic molecule and has weak surface tension (19). Owing to these properties, the compound may associate with negatively charged macromolecules on the bacterial surface (26). Moreover, CPC may permeate into thin or thick oral biofilms (20), a feature that accounts for its high germicidal and bacteriostatic potencies (20, 26). Therefore, the use of mouthwashes containing CPC, along with tooth brushing, may be highly effective for the prevention of dental plaque and inflammation of gums (21, 27-30). Sreenivasan et al. investigated the antibacterial capabilities of mouthwashes containing 0.05% CPC (18), reporting greater than 90% colony reduction (18). In the present study, formula A, containing 0.05% CPC, demonstrated greater than 99% antibacterial activity (P ≤ 0.001). Similarly, the antimicrobial ability of CPC has been described in other studies (19-22, 25-41). Therefore, the use of 0.05% CPC as an antibacterial agent in mouthwashes may be appropriate for preventing dental caries. 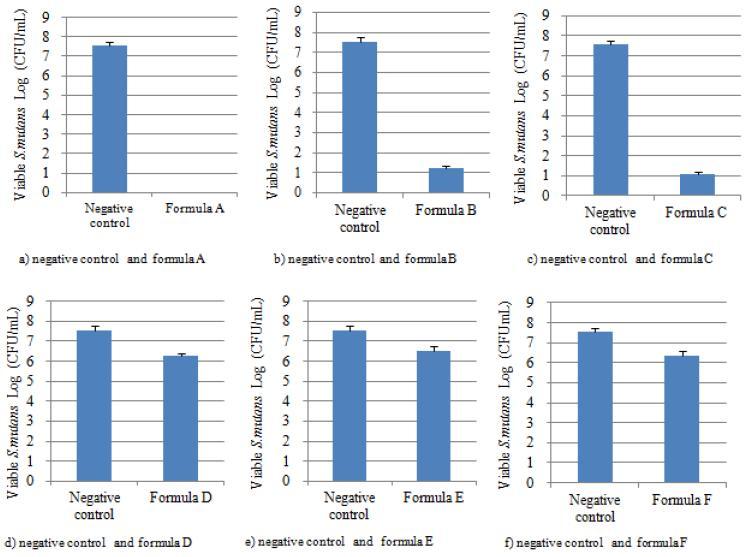 Although the sole component of formula B is 0.02% NaF, formula B displayed greater antibacterial activity (6-log reduction; P ≤ 0.001) in the planktonic evaluation. Fluoride ions, possessing antibacterial activity (42-45), have been widely used in oral hygiene studies for the past 50 years, to reduce the formation of dental caries and to prevent periodontitis (44). Formula D also contained NaF (0.02% NaF and 0.02% IPMP); however, it had the weakest antimicrobial activity in the present study (P ≤ 0.001). While few reports concerning the antibacterial effects of isopropylene methyl phenol (IPMP) and NaF have been published, both IPMP and NaF are widely used antimicrobial agents for reducing dental caries (42-48). Wakamatsu et al. (47) reported that IPMP-containing mouthwashes displayed a 2-log bacterial reduction in S. mutans biofilm. In the present study, formula D showed reductions of 0.12 log (P ≤ 0.001) in the biofilm method and 1.29 log (P ≤ 0.001) in the planktonic method. The antimicrobial effect of formula D was lower than that of formula B (range: 1.29 log and 6.33 log, respectively; P ≤ 0.001). The underlying reason for this difference in microbial activities between formula B and D is unknown. Further research will be required to unravel the interaction between NaF and IPMP.

Formula C contained EO and 27% ethanol. EO has been used as an antiseptic agent for the prevention of dental caries and gingivitis (49), as discussed in previous studies (17, 22, 49-52). Albert-Kiszely et al. reported that oral health was improved with the use of mouthwashes containing EO and CPC (twice a day for 6 months) after 1 min of tooth-brushing (22). Thus, EO is an effective component of mouthwashes and plays a role in pathogen removal.

On comparison of the two techniques, the planktonic method showed higher antimicrobial activity than that exhibited by the biofilm method (ranges: 0.05-5.54 log and 1.02-7.56 log, respectively). In previous study, the differential result existed against antibacterial activity of Aggregatibacter actinomycetemcomitans between biofilm and planktonic methods (53). Biofilm methods were effective in evaluating the antimicrobial competence of mouthwashes, as mouthwashes should affect the survival capacity and penetrate the biofilm matrix of bacteria in the oral environment (53). Therefore, various modified biofilm methods have been widely used in many studies using planktonic methods (20, 39, 40, 45, 46, 54).

Six formulations were used in this study (A-F). Formula A was Garglin RegularⓇ (Dong-A Pharmaceutical Co. Seoul, South Korea). Formula B was Garglin MintⓇ (Dong-A Pharmaceutical Co.). Formula A contained CPC and NaF, whereas formula B contained NaF alone. Formulas C and D were purchased from a market in Seoul, South Korea. Formula C consisted of EO and ethanol, and formula D consisted of IPMP and NaF. Formulas E and F contained 10% and 20% ethanol, respectively— a common antimicrobial agent present in mouthwashes (55). Phosphate-buffered saline (PBS; HyClone Laboratories, Inc, South Logan, UT, USA) was used as a negative control. The components of the six solutions tested are presented in Table 2.

Table 2.Components of the tested solutions

The biofilm evaluations were performed according to the method described by Fine et al. (53) with slight modifications. Biofilms of S. mutans were formed in BHI broth in a 75-cm3 cell-culture flask (T75 cell culture flask; SPL Life Sciences Co., Gyeonggi-do, South Korea). S. mutans was inoculated in BHI broth for 24 h; the broth was then replaced every 24 h and incubated for 5 days to obtain a sufficient population of bacteria (approximately 1 × 105 CFU/ml). Biofilms were washed three times in sterile PBS to remove the cell suspension. Then, the biofilms were treated with 5 ml each of the six formulations and PBS (negative control) for 30 s, followed by removal of the test solutions. After removal of the residual mouthwash, the biofilm in each tube was washed three times with sterile PBS. Subsequently, the biofilms of S. mutans were scraped using a cell scraper (SPL Life Sciences Co.), and the volume of biofilm was adjusted to 1000 μl by addition of PBS. S. mutans was transferred into 1.5-ml tubes and dispersed for 15 s using a vortex mixer (VELP Scientifica, Usmate Velate MB, Italy). The cell suspensions were serially diluted, inoculated on a BHI agar plate, and incubated at 37℃ for 3 days.

S. mutans was inoculated in BHI broth and cultivated at 37℃ for 24 h as described above. The planktonic evaluation was performed according to the method described by Fine et al. (53). Viable cells were measured by the plate count agar method, whereby a cell density of 1 × 107 CFU/ml was obtained. The absorbance of S. mutans was measured using a Beckman DU 530 spectrophotometer (Beckman Coulter, Inc., Pasadena, CA, USA) at an excitation wavelength of 600 nm, and the measured OD value was approximately 0.7. For the planktonic method, S. mutans was isolated by centrifugation at 13,500 ×g for 1 min followed by removal of the supernatant. The remaining pellets of S. mutans were added to 500 μl each of the six formulations and PBS for 30 s. Next, the S. mutans was centrifuged at 13,500 ×g for 30 s, and the supernatant was removed. The remaining pellets of S. mutans were washed three times with sterile PBS to remove the residual mouthwash. Next, 1,000 μl of PBS was added to resuspend the pellets. S. mutans was serially diluted, and a plate count was performed to determine the viable cell count. S. mutans was then incubated at 37℃ aerobic atmosphere for 3 days for enumeration of viable bacteria.

All experiments were repeated three times, and the mean and standard deviation (SD) values were calculated. The colony density was log-transformed, and the log reductions of the tested mouthwashes were compared to the PBS. All data were analyzed using IBM SPSS statistics 21 program (56). The P-values were calculated, and significant differences with a confidence level of 95% were measured.