Journal of Microbiology and Biotechnology

The Korean Society for Microbiology and Biotechnology (한국미생물·생명공학회)

Lactic acid bacteria (LAB) are the heterogeneous group of acid-tolerant gram-positive bacteria that produce lactic acid as the major fermentation product [16]. Thanks to the production of organic acids, LAB are able to inhibit the growth of harmful bacteria in the fermented food and provide a food item with its own texture and flavor [7]. LAB are also the representative groups of probiotics that provide a wide range of health benefits to the host, such as inhibiting infection, inflammation, and allergy [4,6]. Probiotics are well known to control inflammatory processes in the intestine by the modulation of the intestinal microbial environment and the regulation of the gut immune system [20], which led to the studies of the bacteria for the prevention or treatment of inflammatory conditions including inflammatory bowel disease (IBD) [10,12].

IBD, which includes Crohn’s disease and ulcerative colitis, is the chronic inflammatory condition of the intestine leading to diarrhea, abdominal pain, and even cancer [2]. Recently, the incidence and prevalence of IBD have increased in Asian countries, partly due to changes in the gut microbiota accompanied by the westernization of diet and the increased use of antibiotics [19]. Besides surgical intervention, the treatment of IBD relies on long-term medication with anti-inflammatory and immunosuppressive agents to relieve the symptoms, which brings a great deal of harmful side effects to the patients [3]. If there are any drugs or supplements with long-term safety for IBD patients, especially those from natural resources, they would be used for preventing the diseases as well as treating the symptoms. The findings that potentially harmful bacteria predominated in the intestine of IBD patients suggest that LAB could be applied for the treatment or prevention of IBD [5,22,23]. Many beneficial effects of probiotics are related to their immunomodulatory capacities as well as anti-inflammatory activities, which also makes LAB the ideal candidates for IBD [10,12,20]. Certain LAB strains have been shown to stimulate T cell populations responsible for the regulation of inflammatory process, such as regulatory T cells (Treg) [13]. By increasing IL-10 levels, some LAB were successfully used for IBD patients as an adjunct therapy [12]. In our previous study, a mixed LAB formulation composed of four different LAB was shown to inhibit the development of atopic dermatitis in mice [24], which prompted us to examine the effectiveness of the mixed LAB formulation on other autoimmune-type inflammatory diseases such as IBD. Here, we have studied the anti-inflammatory activity of the mixed LAB formulation in vitro with the lipopolysaccharide (LPS)-induced nitric oxide (NO) production in RAW 264.7 cells, and also in vivo using the trinitrobenzene-sulfonic-acid (TNBS)-induced mouse IBD model.

Preparation of the Mixed LAB Formulation

The LAB formulation used in this study, named ATP formulation, was prepared as described previously in the study of the effects of the formulation on an atopic dermatitis model [24]. To make 1 g of ATP formulation, a total of 5 × 108 viable cells composed of each 1.25 × 108 viable cells of Bifidobacterium lactis (KCTC 11904BP), Lactobacillus casei (KCTC 12398BP), Lactobacillus plantarum (KCTC 10782BP), and Lactobacillus rhamnosus (KCTC 12202BP) were mixed with the filler material containing polydextrose, fructooligosaccharide, glucooligosaccharide, and magnesium stearate, which constituted 85% (w/w) of the formulation.

RAW 264.7 macrophage cells were plated with DMEM/10% FBS and allowed to adhere to the well. The cells were then treated with ATP formulation at the concentrations of 0.02 (1 × 105 colony forming units (CFUs)), 0.1 (5 × 105 CFUs), and 0.5 mg/ml (2.5 × 106 CFUs), and those treated with 0.01 μM dexamethasone were used as an anti-inflammatory control. After an hour of sample treatment, the cells were then exposed to LPS (0.1 μg/ml) for an additional 15 h. The amounts of NO produced were calculated from the nitrite accumulations in the wells using the Griess reaction [8]. Briefly, 100 μl of each culture supernatant was mixed with an equal volume of Griess reagent at room temperature for 10 min, and the nitrite concentration was calculated using the sodium nitrite standard curve. The amount of live cells in each culture was also determined using the TACS MTT Assay (R&D Systems) as described by the manufacturer. Briefly, culture supernatant of each well was replaced by fresh DMEM and followed by the treatment of the MTT reagent until purple precipitates became evident. Following resolution of the precipitates with the detergent solution, absorbance at 595 nm was measured.

The anti-inflammatory activity of the ATP formulation was studied in vivo using TNBS-induced IBD model mice [9].

Degrees of inflammatory changes of the colon tissues were examined by comparing the thickness of the colon wall, necrotic damage of the colon surface, and histologic analysis of the colon tissue sections. Colon segments from the region 4 cm proximal to the anus were excised and subjected to the measurement of colon wall thickness and the observation of hemorrhagic necrosis on the colon wall surface. The excised colon tissue segments were then preserved in 10% formaldehyde, and the fixed tissues were embedded in OCT compound prior to being sectioned with a cryostat. The 5 μm sections were then stained with hematoxylin and eosin (HE staining) and examined under a light microscope for any disruption of the epithelial mucosa structure and the infiltration of inflammatory cells into the colon tissues.

Modulation of the gene expression in the colon tissues treated with TNBS by the ATP formulation was examined using the reverse-transcriptase polymerase chain reaction (RT-PCR). RNAs were prepared from the colon tissue sections of the mice fed with 4 mg of ATP formulation three times a day for two consecutive days and then treated with the rectal injections of 2% TNBS. The RNAs from the tissues of the mice fed with the filler material and treated with 2% TNBS were used as the vehicle-treated control. Total RNAs were prepared using the SV Total RNA Isolation System as described by the manufacturer and then subjected to complementary DNA (cDNA) synthesis with an Omniscript RT kit (Qiagen, Germany). The cDNAs were then amplified using a number of primer sets for the mouse genes known to be involved in the inflammatory process, including the IL-6, FasL, and Fas genes. The primer set TGCACTTGCAGAAAACAATC and TGGTCTTGGTCCTTAGCC was used for IL-6. The primer set CAACACAAATCTGTGGCTACCG and CCCATATCTGTCCAGTAGTGCA was synthesized for FasL, and the set AGGAATTCGTGTGAACATGGAACCCT and AGAAGCTTCACTCCAGACATTGTCCT was for Fas. The primer set GGCACCAGGGTGTGATGG and ACGGTTGGCCTTAGGGTTC was selected for β-actin. PCRs were carried out using the following conditions: one cycle of 94℃ for 5 min; 30 cycles of denaturation at 94℃ for 4 sec, annealing at 60℃ for 4 sec, and elongation at 72℃ for 45 sec; and an extension cycle at 72℃ for 10 min.

Data were evaluated using Student’s t-test, and p < 0.05 was considered as statistically significant.

Effect of ATP Formulation on NO Release from the LPS-Treated RAW 264.7 Cells 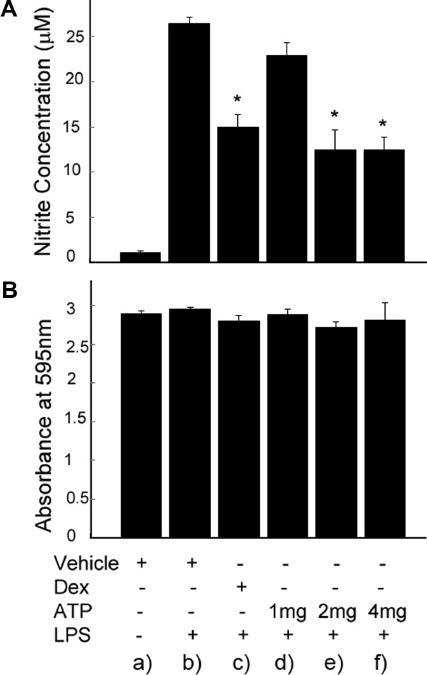 Fig. 1.NO production from RAW 264.7 cells treated with ATP formulation (A) and viabilities of the cells in the cultures (B). Lane a) represents the cells treated only with vehicle (filler) without LPS treatment. Lanes b) and c) are those treated with vehicle and dexamethasone (Dex) prior to LPS addition, respectively. Lanes d), e), and f) represent cells treated with the ATP formulation at the concentrations of 1, 2, and 4 mg/ml, respectively, before LPS treatment. The P values less than 0.05 compared with the LPS-treated control (lane b) are indicated with asterisks. 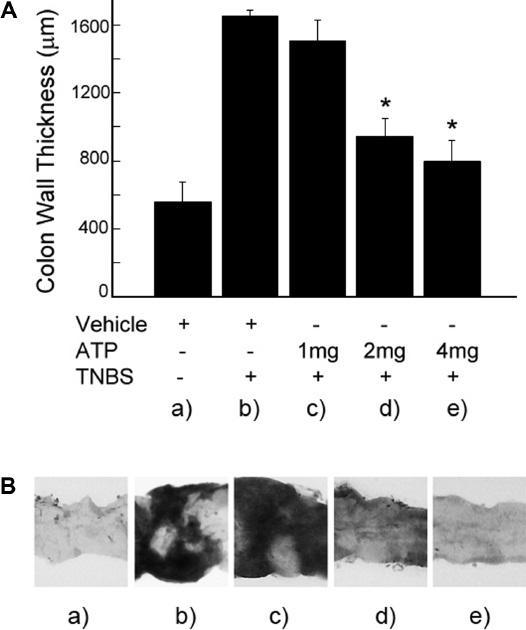 Fig. 2.Effects of the rectal injection of ATP formulation on the TNBS-induced colitis development. Panels (A) and (B) represent the thickness of the colon wall and macroscopic appearance of the colon wall surfaces, respectively. Lane a) represents a control group injected with vehicle (filler) and 50% ethanol, and lane b) indicates another control group injected with vehicle and TNBS. Lanes c), d), and e) indicate the ATP-formulation-treated groups injected with TNBS mixed with 1, 2, or 4 mg of ATP formulation, respectively. The numbers in (B) represent the same numbers described in (A). The P values less than 0.05 compared with the TNBS-treated control (lane b) are indicated with asterisks. 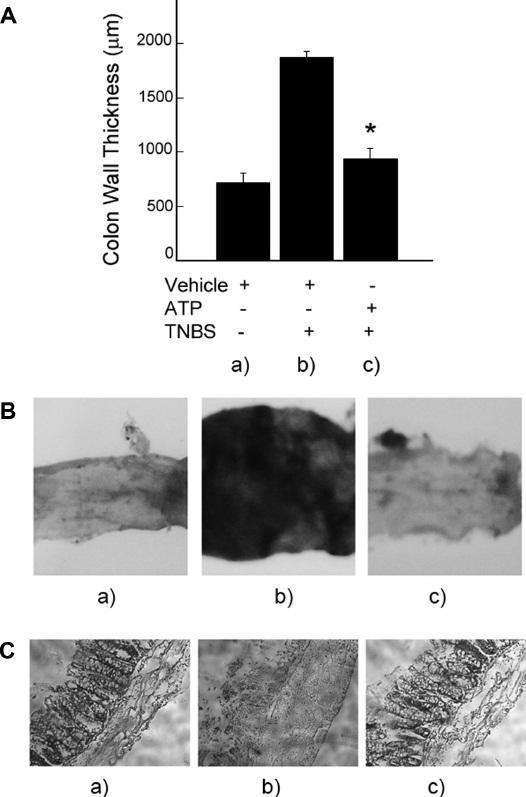 NO produced by macrophages plays a role in the inflammatory response, and thus NO production from LPS-treated RAW 264.7 macrophage cells is a good model system for the study of inflammation in vitro [21]. Using this in vitro system, we were able to identify that the ATP formulation containing four probiotic LAB strains significantly suppressed NO production in a dose-dependent manner, indicating that the formulation presents anti-inflammatory activity. Considering that IBD includes complex autoimmune diseases involving increased luminal activities of nitric oxide and inflammatory processes [2], we decided to study if the formulation could block inflammatory development in mice treated with TNBS, a mouse model of a human IBD. In both studies, using the rectal injection and the oral feeding of ATP formulations, the formulation prevented the colon wall thickening as well as hemorrhagic necrosis induced by TNBS. Histologic studies of the colon tissues also showed that the formulation blocked ulcerative damage of the colon epithelial mucosa and leukocyte infiltration into the colon tissue. Since the known characteristics of IBD involve NO production, colon wall thickening, hemorrhagic necrosis, leucocytes infiltration, and epithelial mucosa disruption [2,11], all these findings clearly indicate that the ATP formulation effectively inhibited the inflammatory process and damage induced by TNBS. The findings from the oral-feeding protocol, where the feeding of ATP formulation blocked the inflammatory changes by the rectal injection of TNBS, suggest that the feeding of ATP formulation provided enough probiotics into the colon tissue and modulated the micro-environment of the tissue to resist inflammatory changes induced by the rectal injection of TNBS.

In this study, a formulation containing mixed LAB strains was found to have some protective effect on the development of inflammatory changes in an IBD model, which could be exploited to develop probiotic formulations for the treatment or prevention of IBD. Since the long-term consumption of IBD medications itself becomes a great threat to patients [26], protective formulations like the ATP formulation also can be used as an adjunct therapy for IBD patients to reduce the amount of the medications or potentiate the effect of the conventional treatments.