A crack which is axially oriented with small size is hard to detect in conventional system. CMFL(Circumferential Magnetic Flux Leakage) type PIG(Pipelines Inspection Gauge) in the NDT(Nondestructive Testing), is operated to detect this defect called axially oriented cracks in the pipe. It is necessary to decompose the size and shapes of cracks for the maintenance of underground pipelines. This article is mainly focused on the decomposing method of the size and shape of the axially oriented cracks by using inspection signal data for defect.

The MFL(Magnetic Flux Leakage) testing method is one of the most commonly used effective NDT(Nondestructive Testing) methods and has been applied for the highly efficient inspection of metal losses in various kinds of ferromagnetic materials such as underground pipelines [1, 3].

However, the axially oriented crack is hard to detect in the general MFL PIG(Pipeline Inspection Gauge) because the magnetic field is not blocked by the crack. In the system, magnetic field is parallel to the crack, so the leakage field becomes too small to detect. The CMFL (Circumferential Magnetic Flux Leakage) type nondestructive testing method is applied to detect axially oriented cracks of gas pipelines [4]. In CMFL type NDT system, the object is magnetically saturated by the magnetic system with permanent magnet and yokes. CMFL PIG generates circumferentially oriented magnetic fields that can maximize the leakage field in the vicinity of cracks on the pipe as shown in Fig. 1 [5]. Fig. 1 shows the diagram and operating principle of CMFL PIG to detect a crack on the pipe by using circumferential magnetic fields.

Fig. 1.The diagram and operating principle of CMFL PIG

2.1 Design of a simple module of CMFL PIG

As depicted in Fig. 2, the structure of CMFL PIG consists of two main parts. The one is the magnetic system devised for generating a magnetic field with sufficient strength in the pipe, the other is sensor system. In order to get a high magnetic efficiency, the cast steel type back-yoke and Nd-Fe-B magnets are equipped with the system. In general, the thickness of 32-inch pipelines is 17.5 mm. The saturated magnetic flux density of the steel pipe is about 1.8 T and the residual magnetic flux density of magnets which are chosen in this system is 1.24 T. These are important design factors for the magnetizer system of CMFL PIG. By using equivalent magnetic circuit method with (1) to (4) equations, it is possible to determine the size of magnet and the size of back-yoke in this system as depicted in Fig. 2 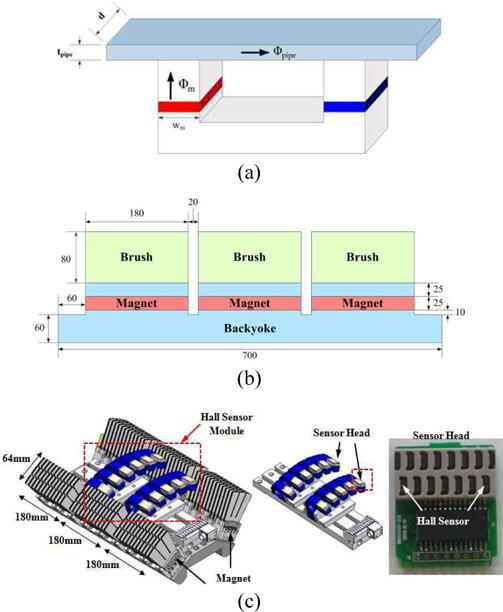 The size of magnets is designed by using a magnetic circuit theory that can be optimized. The length of magnet is 180 mm, width is 64 mm and height is 25 mm.

The residual magnetic flux density of magnet is 1.24 T and the coercive force is 880,000 A/m. In order to detect the leakage signal in the vicinity of a crack, hall sensors are used for measuring the magnetic leakage field as a magnetometer. In Fig. 2, Sensor heads which consist of 15 hall sensors are loaded in simple module of the CMFL PIG. The number of sensor heads is 11. Hall sensors are arranged about 1.9 mm interval with each other and they are placed to 3 mm from surface of the pipe. The performance test of CMFL System is performed with a pipe specimen as shown in Fig. 3.

Fig. 3.The structure for performance test of CMFL System

The relations between magnetic field intensity H, flux density B, magnetic vector potential A and magnetization M of the magnetic material could be represented as follows,

From substituting these equations into (5) and (6), the governing Eq. (7) is represented by Coulomb gauge and vector relation. In this system, there is no source for current density (J=0) except for permanent magnet. The calculation of magnetic flux density on the pipe or leakage flux density around crack is performed by finite element method as shown in Fig. 4. As a result, the magnetic flux density is saturated at 1.7~1.8 T so that is enough to magnetize of pipe. And then it is possible to generate the maximum flux leakage. In Fig. 4, there are two modules of CMFL PIG designed as same structure to inspect whole area of pipelines. They are placed twistingly each other with 45 degree difference.

Fig. 4.The distribution of magnetic flux density on the PIG and pipe. 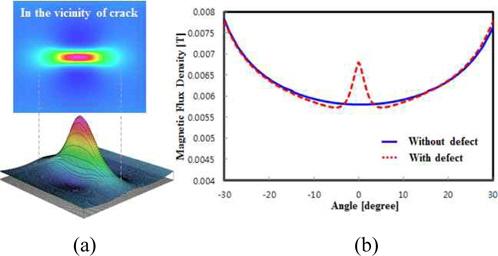 Fig. 5.Numerical analysis of defect signal: (a) Magnetic leakage field around a crack; (b) The distribution of leakage signal at sensor position

3.1 Signal distribution with respect to the length of cracks

Fig. 6 shows the distribution of defect signals on the axial distance detected by Hall sensors are proportional to the length of cracks when the width and depth of crack are the same. The amplitude of sensing signals is also increasing with respect to the crack length.

Fig. 6.Leakage field signal with respect to the defect length

3.2 Signal distribution with respect to the width of cracks

In Fig. 7, it shows that the distribution of defect signals on the circumferential distance is proportional to the width of cracks when the length and depth of crack are the same. The amplitude of sensing signals is also increasing with respect to the crack width.

3.3 Signal distribution with respect to the depth of cracks

Fig. 8 shows the variation of sensing signals with respect to 20 %, 40 %, 60 % of the crack depth when the length and width of crack are the same. The peak amplitude of the leakage field is mainly dependent on the crack depth. The leakage signal with respect to depth size is more complicated because it implies the effect of length and width simultaneously. So, it is necessary to build an algorithm to derive the accurate size of the defect from the measured sensing signals. Fig. 9 shows the relationship of leakage signals with respect to the variation of crack size from both simulated results and experimental results. Also, when it comes to experiments, standard cracks are made by a press machine on the surface of pipeline specimens. If the material of specimens is seamless, it is lightly pressed by the machine.

Fig. 8.Leakage field signal with respect to the defect depth

Fig. 9.The relationship of leakage signal amplitude with respect to the size of crack 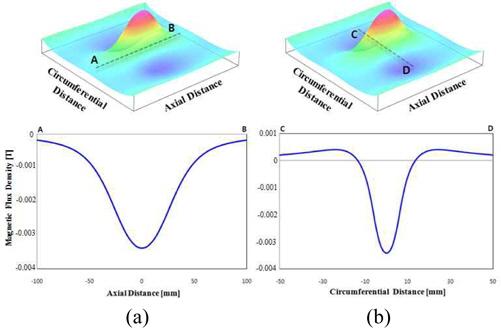 4.1 Estimation of the length of a crack

The relation between the length of crack and the width of leakage signal on the axial direction is linearly dependent. As shown in Fig. 11, the length of a crack is determined from the pulse width of 65 percent of the peak amplitude of signal in this system. It is possible to verify the ratio of the numbers of estimation by using both FE simulation and experimental measurement. We had already known the reference crack when we did experimental work. Because the reference crack has the information for defect size and shape, so it is already known factor. Therefore, from the distribution of leakage signal on the axial direction, the ratio of estimation such as 65% is determined as the length of reference crack even if PIG’s magnetic system is changed. If the system size is changed, the amplitude of leakage signal will be changed but the estimating rate will not be changed. 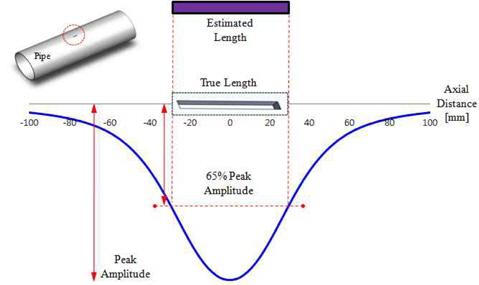 4.2 Estimation of the width of a crack

To estimate the crack width, it is necessary to consider the relation between defect width and signal width on the circumferential direction. In Fig. 12, the width of a crack is determined from the pulse width of 45 percent of the peak amplitude of signal in this system.

4.3 Estimation of the depth of a crack 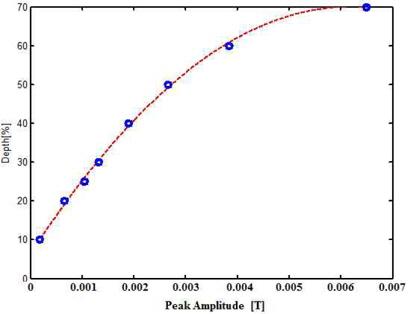 Fig. 13.Experimental measurement of the peak amplitude of leakage signal with respect to crack depth.

The algorithm to determine the variables in (8) is shown in Fig. 15. Beforehand, the defect signal is depicted by Hall sensors in CMFL System. The length and width of a crack are determined by using estimation method as previously presented. Then the shape factors of depth Eq. (8) could be obtained by polynomial surface fitting with respect to defect’s length and width. Fig. 15 describes the algorithmic process of determining the shape factors and Fig. 14 shows the results of shape factors for several cracks oriented on the axial direction on the underground pipeline. The shape factors depend definitely on the magnetic system of MFL PIG. 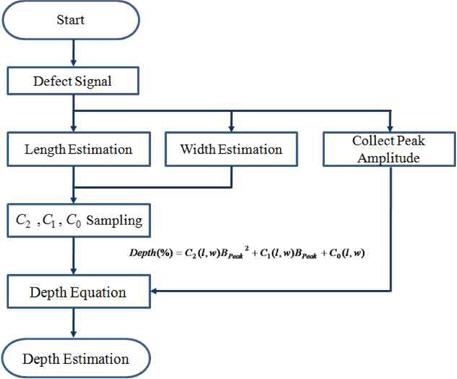 Fig. 15.The algorithm to determine the shape of axially oriented cracks.

However, once the factors are obtained as in Fig. 14, the depth of axial cracks could be easily computed by (8). 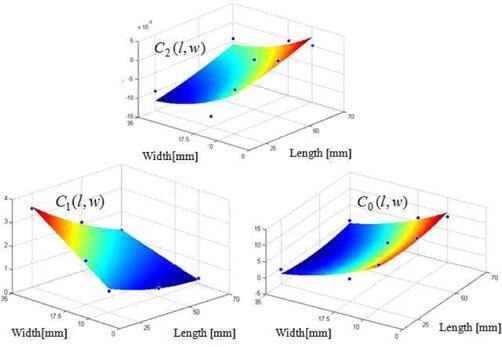 By measuring the defect signals such as magnetic flux leakage density and using the mechanism of estimation, it is possible to determine the shape of cracks. The estimation results are presented comparing to real size of cracks in Fig. 16. The error tolerance for length and width is generally 10 mm, and admitted depth tolerance is 20 %. Fig. 16 shows that the length and width of axially oriented crack is well fitted within tolerance to the real size. The most depth of axial crack is also within tolerance in the figure. In Fig. 16(c), there are some errors in case of more than 50% depth of crack. They are general phenomenon in MFL type nondestructive test when we try to detect a deep crack on the surface of the pipe. This is the reason why there are such nonlinear effects of magnetic saturation in the pipe. When a deep crack occurs in the pipe, the area of pipe is rapidly decreased and magnetic fields are strongly influenced by nonlinear characteristic of material. However, that is not really problem because the small size crack is detected very well before it could be grown gradually and it could be managed by using our estimation approach in advance. In this paper, the algorithm for estimating crack depth is proposed in Fig. 13~Fig. 15. Results in Fig. 16 show that the estimated results are within error tolerance. Estimated results, especially for small cracks damaged less than 30%, are well estimated, which is important for commercial maintenance. Before the cracks are damaged over 50%, pipeline should be replaced new one in the maintenance scheme.

Fig. 16.Experimental results on the estimation of shape of axial cracks.

In this research, a CMFL type NDT system is performed to detect the axially oriented small crack which is hard to detect by the conventional MFL PIG. A CMFL PIG was designed to generate circumferential magnetic field so as to maximize the leakage flux around axially oriented cracks on the pipeline. Because measured Hall sensor signals impose information of length, width and depth together, it is necessary to develop an effective algorithm to derive an actual size of an axial crack. From the magnetic leakage field computed by 3D finite element method, it is possible to develop an algorithm to evaluate the shape variable.

Experimental measurements of the various size of axial cracks were performed for verifications. The result showed that the length, width and most depth of axial crack agreed within tolerance with actual ones. Seldom crack, such as curved ones, would be needed more delicate approach.