This paper presents a design of novel 2-phase 6/5 switched reluctance motor (SRM) for an air-blower application. This type of motor is suitable for the applications that require high speed and only one directional rotation as air-blower. The desired air-blower is unidirectional application, and requires a wide positive torque region without torque dead-zone. In order to get a wide positive torque region without torque dead-zone during phase commutation, asymmetric inductance characteristic with non-uniform air-gap is considered. The proposed motor can be operated at any rotor position. The proposed 6/5 SRM uses short flux path technique that achieved by means of winding configuration and lamination geometry. The purpose of short flux path is to reduce the core loss and the absorption MMF in the stator. The proposed 2-phase 6/5 SRM is verified by finite element method (FEM) analysis and Matlab-Simulink. In order to verify the design, a prototype of the proposed motor was manufactured for practical system.

SRM has simple structure and inherent mechanical strength without rotor winding or permanent magnet. These mechanical structures are suitable for harsh environments and high temperature and high speed applications [1-4].

This paper presents of a 2-phase 6/5 SRM for an air-blower. In this application, the impeller rotates only one direction, and it requires a wide positive torque without torque dead-zone.

The dimensions of the 6/5 SRM were calculated according to the given output power, rated torque, rated speed and considerations of the dimension limited conditions. The calculations based on the relationship between mechanical energy and electrical energy explained by electromechanical energy conversion principle. In addition, the flux density, the magnetic saturation and the coil fill factor are also considered. The geometry structure and magnetic circuit will be verified by FEM software and Matlab-Simulink. To satisfy the requirements of air blower application, the 6/5 SRM was designed with dimensions as provided in Table 1.

Table 1.The specifications of the proposed 6/5 SRM

Fig. 1 shows the 2-phase 6/5 SRM structure. The proposed motor has 6 stator poles and 5 rotor poles. The stator is separated into two cores with three poles each, and between these cores have no steel lamination. To keep the rotor poles do not touch into the stator poles, the stator core is fixed by an aluminum plate. The plate has no influences on flux distribution of the proposed motor. Each phase consists of windings on three poles of the E-core, and these windings are connected in serial. With this structure, the magnetic flux flows through the stator core are to be shortest. 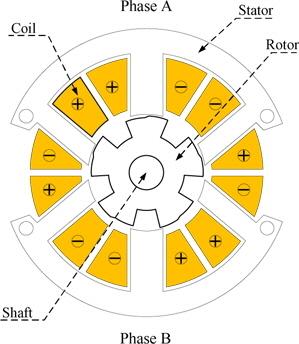 A disadvantage of the one-phase and 2-phase motor is self-starting ability, and the 6/5 SRM is not an exception. To overcome the torque dead-zone problem, the 6/5 SRM uses a uniform rotor shape and an asymmetric inductance profile. 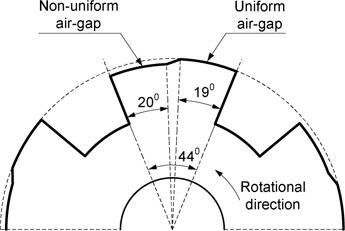 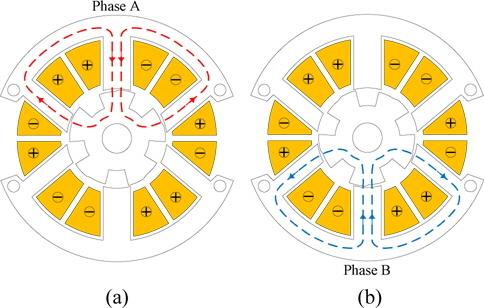 The SRM has nonlinear characteristic, the torque production depends on both current and rotor position. An FEA is needed to verify the design as well as for simulation of the proposed motor. In this paper, the FEMM software is used, it is free software. The FEMM is used in combination with Matlab to analyze the motor characteristic. The motor characteristics such as torque production, flux-linkage, and inductance are calculated by using FEEM. The data obtained from FEM analysis will be used for simulation of the 6/5 SRM drive system. Fig. 4 shows the flux distribution in the 6/5 SRM. To get a high torque density, the 6/5 SRM is analyzed at saturation state of magnetic material. Because the stator of the 6/5 SRM with two E-cores are separated, so the magnetic flux flows through only in E-core with respective phase excitation. There is no fringing or mutual flux linkage between two phases. The 6/5 SRM also has no revert magnetic flux, for this reason, the core losses is reduced. 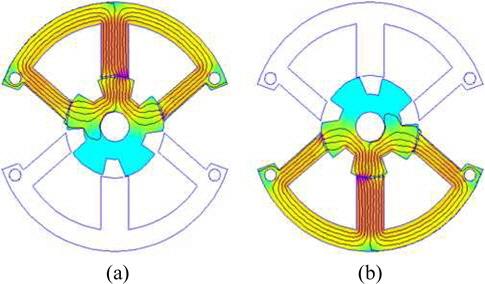 Torque is one of most important parameters. The designers try to increases torque with efficiency. The higher torque density that means the motor size and the cost can be reduced. In this paper, the desired air-blower requires a wide positive torque without torque dead-zone. When calculated the dimension of the motor, only average torque was considered. But torque is a function of both rotor position and phase current, and it varies vs. rotor position with a given current. Torque is analyzed with phase current from 0 to a current amount where the motor achieved saturation state as shown in Fig. 5, in which the torque characteristic at rated value is most important. Compared with the others motor which have a uniform rotor shape, the proposed motor has lower torque production. 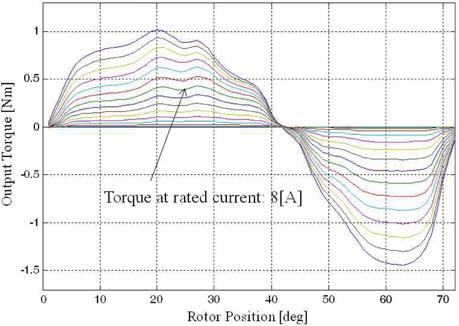 where Te is the electromagnetic torque, i is the excited current, and L(θ, i) is the inductance dependent on the rotor position and phase current.

By using the 2D FEA, the inductance and torque characteristics are analyzed. Fig. 5 shows the torque profile of the proposed motor. Fig. 6 shows that the overlap torque is about 10 degree. This overlap torque ensures that the motor can be operated without the torque dead-zone and has self-starting ability.

Fig. 7 shows the inductance profile of the proposed motor. Because of uniform rotor shape, the 6/5 SRM has asymmetric inductance and torque profile with a wider positive region. This characteristic of inductance makes 6/5 SRM is suitable for unidirectional rotation devices as air blower in this study. 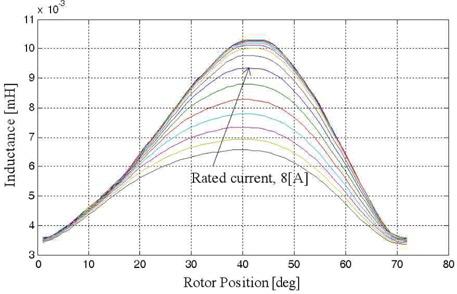 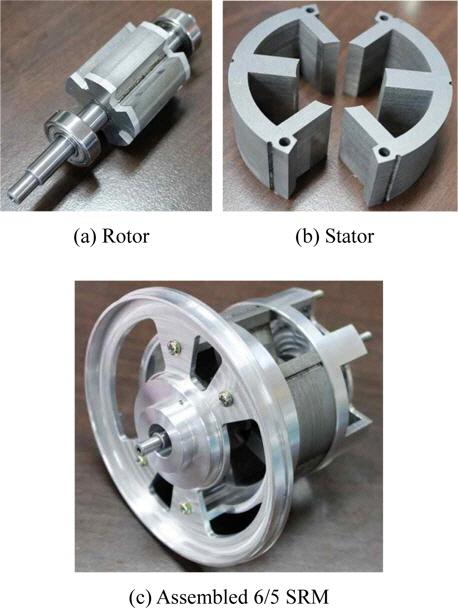 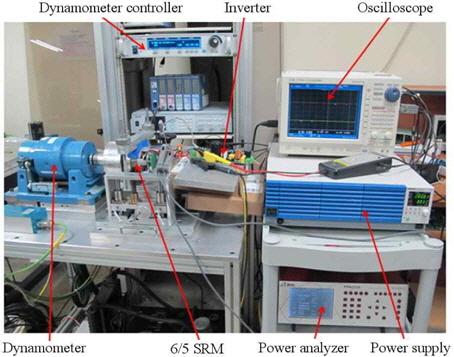 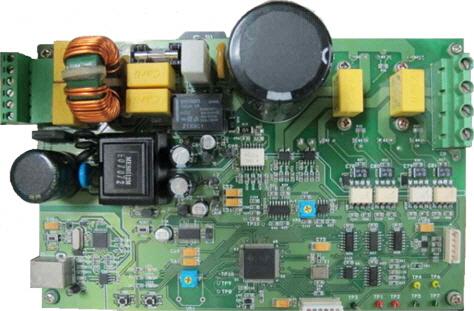 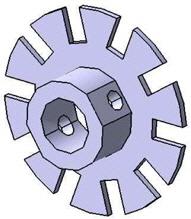 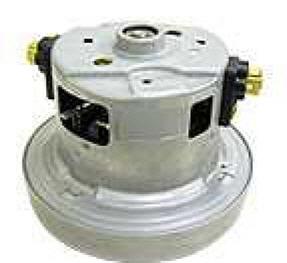 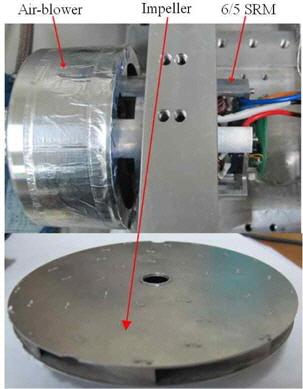 Fig. 15 shows the experimental results of the proposed motor with air-blower at 10,000[rpm] and 15,000[rpm], respectively. Current controller was applied for proposed motor scheme. As shown in Fig. 15, there is no over-shoot on phase currents. 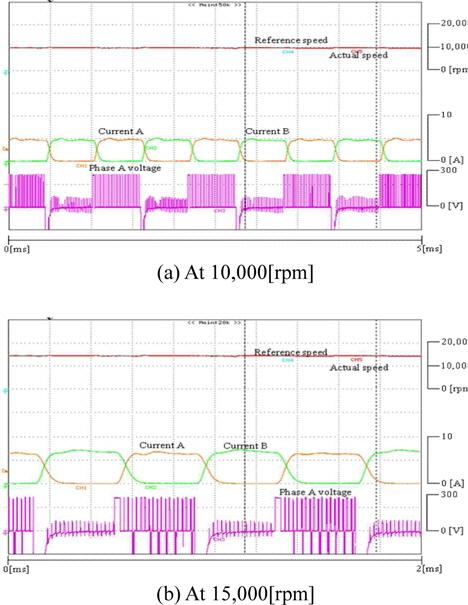 The output and input power are mesured by high speed dynamometer 2WB43 and power analyzer PPA2530, respectively. Fig. 16 shows the experimental results of the proposed 6/5 SRM with dynamometer. 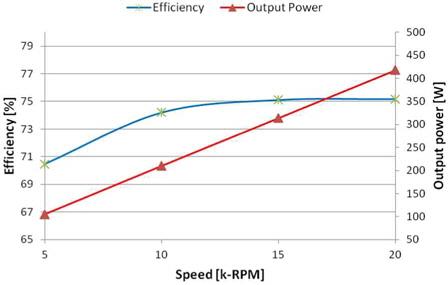 This paper presents a novel 2-phase 6/5 SRM which has short flux path to reduce core losses and increase torque production. In order to produce a continuous output torque, the positive torque region is extended with asymmetric inductance characteristic. The proposed motor is suitable for applications that require unidirectional rotation.

The performance of the proposed 6/5 SRM was verified with a practical drive system and air-blower test. In the experiment, the efficiency of the proposed motor is higher than that of the universal motor.

Supported by : Ministry of Education (MOE)