In this work, the frequency response of gate-all-around (GAA) Ge/GaAs heterojunction tunneling field-effect transistor (TFET) with hetero-gate-dielectric (HGD) and pnpn channel doping profile has been analysed by technology computer-aided design (TCAD) device-circuit mixed-mode simulations, with comparison studies among ppn, pnpn, and HGD pnpn TFET devices. By recursive tracing of voltage transfer curves (VTCs) of a common-source (CS) amplifier based on the HGD pnpn TFET, the operation point (Q-point) was obtained at , where the maximum available output swing was acquired without waveform distortion. The slope of VTC of the amplifier was 9.21 V/V (19.4 dB), which mainly resulted from the ponderable direct-current (DC) characteristics of HGD pnpn TFET. Along with the DC performances, frequency response with a small-signal voltage of 10 mV has been closely investigated in terms of voltage gain (), unit-gain frequency (), and cut-off frequency (). The Ge/GaAs HGD pnpn TFET demonstrated , , THz and .

Conventional metal-oxide-semiconductor field-effect transistors (MOSFETs) driven by drift and diffusion have a lower limit in subthreshold swing (S) (~60 mV/dec) at room temperature due to thermionic emission. The irreducible S is a hindrance in enhancing the on-state current (Ion) while maintaining a sufficiently low off-state current (Ioff), which is also closely related with operation voltage scaling. For this reason, there have been efforts to reduce S below 60 mV/dec for improved switching characteristics [1-4]. Tunneling field-effect transistors (TFETs) operated by band-to-band (BTB) tunneling have been widely researched for its plausible feature of small S dropping below the theoretical limit of MOSFETs [5- 10]. Also, TFETs have stronger immunity against shortchannel effects (SCEs) owing to its tunneling-based operating principle and channel doping profile different from those of conventional MOSFETs [11]. Low on-state current (Ion) has been pointed out as a drawback of silicon (Si) TFET and efforts have been made to enhance the current drivability of many aspects which include trials of applying particular structures [12-14] and low bandgap materials [15]. Besides, it can be achieved by using compound materials to obtain low effective mass and small bandgap [16, 17]. Several device geometry have been researched in order to diminish ambipolar current and an encumbering effect of gate electric field [18-21]. In this work, a TFET device operating by approaches to achieve higher Ion of which validation have been confirmed in terms of high-frequency characteristics, especially frequency response. The device is equipped with both hetero-gate-dielectric (HGD) materials and n-type insertion layer boosting the BTB tunneling [12, 13]. Furthermore, the device channel consists of Ge (source) and III-V compound semiconductor (channel and drain) for enhancing the tunneling efficiency (higher Ion) at the source side and suppressing Ioff at the drain side. Besides the betterments in current characteristics, Ge/(Al)GaAs heterojunction has a good interface owing to its little lattice mismatch [16, 17]. Considering approaching more practical and accurate situation, we are focused on tunneling current via nonlocal trap in the relatively wide tunneling width region of the previous researches [22]. In terms of circuit operation, it is expected that the device with HGD and with n-type insertion layer has the immunity to trap-assisted tunneling (TAT) mechanism and decent high-frequency characteristics even if it is set to lower input Q bias. The channel had a gate-all-around (GAA) structure for enhancing the gate controllability in mainly focused and its characteristics are compared with those of devices with ppn and pnpn channels. The frequency responses are investigated from common-source (CS) amplifier embedding the Ge/GaAs HGD pnpn TFET, one of the most fundamental functional block in the analog circuit, by mixed-mode simulation to obtain more accurate solutions through monitoring the real-time interactions between the device and circumference circuit components [23]. 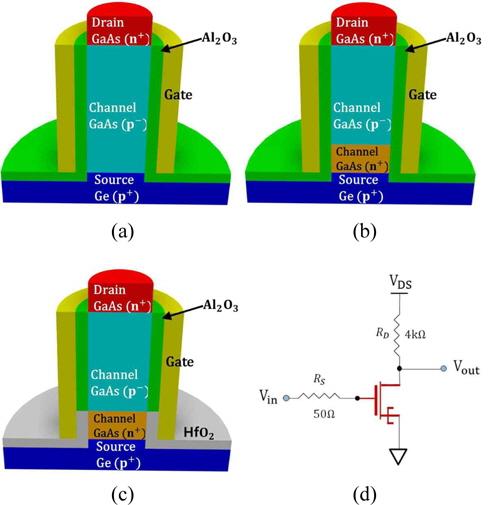 Fig. 1.Schematics of simulated devices and circuit. Crosssectional view of (a) ppn, (b) pnpn, and (c) HGD pnpn TFETs. (d) Configuration of CS amplifier with the TFETs.

Fig. 2(a) shows the transfer characteristics (ID-VGS) of the simulated devices with and without TAT model for ppn, pnpn, and HGD pnpn TFETs. When gate voltage (VGS) is low, TAT is dominant over BTB tunneling due to thick tunneling barrier between source and channel, which is proven by the fact that the Ioff makes a difference near VGS = 0 V depending on whether TAT model is turned on or not. As VGS increases, the effect of TAT is weakened and BTB tunneling begins to dominate. Tunneling probability, T(E), induced by Wentzel-Kramers-Brillouin (WKB) approximation is expressed as

where m* is the reduced effective mass in the average sense of electron (me*) and hole (mh *) effective masses, Eg is bandgap energy, e is electron charge, ξ is the electric field, and ħ is the reduced Planck’s constant [28, 29]. Aided by the equation for Hurkx’s BTB tunneling model, S for TFET can be formulated in a closed form as below.

where constant in the denominator is determined by device dimensions and material properties [30]. Higher VGS increases S from Eq. (2), by which it is expected that TFET is suitable to low-power operation for steeper switching slope. S of the devices in Figs. 1(a)-(c) are extracted to be 31.5 mV/dec, 22.4 mV/dec, and 22.3 mV/dec, respectively, as shown in Fig. 2(a). Slopes much steeper than 60 mV/dec are obtained and further improvements are made in the devices with pnpn and HGD pnpn structures. Transconductances (gm’s) of the devices are depicted in Fig. 2(b), which shows prominent enhancement as the device is evolved to have from ppn to pnpn and HGD pnpn structures. 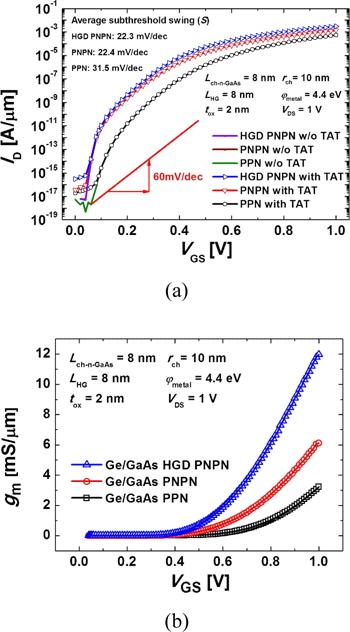 Figs. 3(a) and (b) show the output characteristics (ID-VDS) of the designed devices with and without TAT models at different gate voltages, VGS=0.6 V and 1.0 V, respectively. Superlinear behaviors of ID in the low VDS region are observed as reported in a previous literature [31]. In both cases, ID of ppn TFET is increased by an amount of 15% of its initial value by activating the TAT model in the simulation compared with the current obtained without the model, while pnpn and HGD pnpn devices demonstrate negligibly small change. Increment in ID of ppn TFET is originating from a fact that its tunneling barrier is not thin enough to suppress the TAT current and substantially retards the BTB tunneling as described in Figs. 4(a) and (b). On the other hand, pnpn and HGD pnpn TFETs are immune to TAT so that BTB tunneling is more readily dominant in the operations [32], of which merit comes with circuit performances clearly as will be shown in a later section. 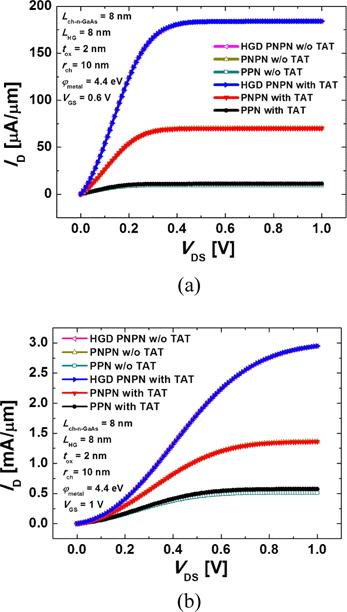 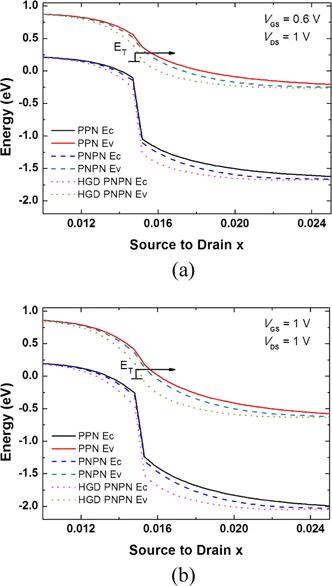 Fig. 5(a) depicts voltage transfer characteristics (VTCs) of a CS amplifier using Ge/GaAs heterojunction TFET. The circuit simulations have been also carried out with and without TAT model to study in comparison its effect on circuit performances. First of all, the operating point (Q-point) needs to be positioned in order to have maximum slope on the VTC curve at Q-point, which leads to the maximum amplification. Input bias was varied with device types for obtaining the optimum condition, which were VIN = 1.16 V for ppn TFET, VIN = 0.78 V for pnpn TFET, and VIN = 0.62 for HGD pnpn TFET. Along with output voltage (VOUT) of the Ge/GaAs TFET-embedded CS amplifier, the slope of VTC curve (dVOUT/dVIN) is plotted as a function of VIN as shown in Figs. 5(b)-(d). The maximum dVOUT/ dVIN values were -6.66 V/V for ppn TFET, -7.82 V/V for pnpn TFET, and -11.28 V/V for HGD pnpn TFET. The DC performance of CS amplifier as an inverter is also improved as the main transistor is evolved from ppn TFET to pnpn and HGD pnpn TFETs. The next important step in biasing an amplifier should be to check if there is no distortion in output swing. Although it was verified that the amplitude of small-signal voltage (|vin| = 10 mV) was not large enough to make any distortion in output swing at the selected Q-point above, the output bias for Q-point was further adjusted to VDS = 1 V so that wide enough output window as well as symmetry in maximum swing could be more stably secured [22]. For this goal, drain resistance can be precisely controlled in through recursive analyses of load-line at the Q-point. Considering the conditions for BTB tunneling, input voltages of the CS amplifiers with ppn, pnpn, and HGD pnpn TFETs were set to 0.59 V, 0.74 V, and 1.15 V, respectively. The CS amplifier with ppn TFET shows VIN shift as depicted in Fig. 5(b), which is mainly due to the increase of ID caused by TAT as previously mentioned in Fig. 3(a). Considering the effect of TAT, the input bias was set to VIN = 1.11 V for the CS amplifier with ppn TFET. After further adjusting of the bias conditions, the derivatives of >VTC at the Q-points (dVOUT/dVIN) as the most crucial factor in small-signal amplification, have been slightly changed to -5.3 V/V (14.5 dB), -6.6 V/V (16.4 dB), and -9.21 V/V (19.4 dB) for the CS amplifiers with ppn, pnpn, and HGD pnpn TFETs, respectively. The prominently high gm (as was confirmed by Fig. 2(b)) of HGD pnpn TFET plays a major role in enhancing the amplification ratio.

Figs. 6(a) and (b) demonstrate the frequency responses of the CS amplifiers with ppn, pnpn, and HGD pnpn TFETs regarding voltage gain (Av) and phase change, respectively. The results were obtained by device-circuit mixed-mode simulations at the final Q-points. The Av values in decibel (dB) correspond to the maximum slopes on the VTC curves (amplification ratios) obtained in the optimization processes travelled above. In Fig. 6(a), the unity gain frequencies (funity) (intercept crossing 0 dB) of the CS amplifiers with ppn, pnpn, and HGD pnpn TFETs, are 8 THz, 9.5 THz, and 10 THz, respectively. This figure of merit (FoM) is one of the crucial in factors in the analog circuits, which implies that circuits embedding the TFETs in this work would have a wide range of operating frequency and its importance is more revealed as the system employs a negative feedback [33]. Fig. 6(b) shows phase shifts of -270°, of which system can be mathematically described by a transfer function with two right-half-plane (RHP) poles and one left-half-plane (LHP) zero [22]. The little curvatures infer that the poles and zero are closely located in the s-plane. 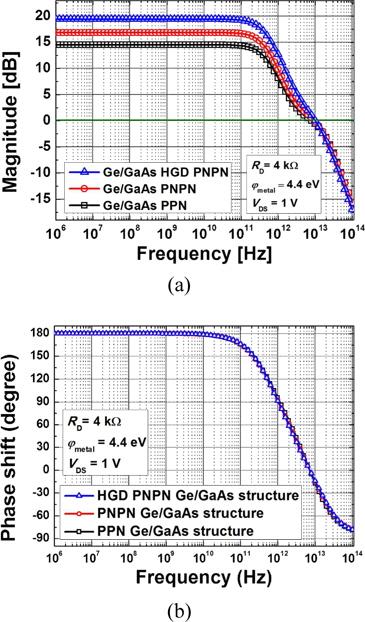 In Fig. 7, current gain and unilateral power gain of the circuits have been extracted. The cut-off frequency (fT), which is defined as the frequency interception with the unity current gain (0dB), is generally specified as 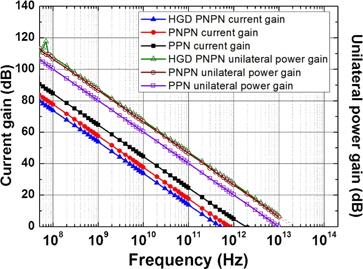 Table 2.Capacitances and transconductances of each PPN, PNPN and HGD PNPN TFET at each input bias.

On the other hand, Unilateral power gain (Umax), which is the measurement of the quality of active devices over the entire frequency range of interest, can be extracted as

where Ys are linear two port network parameter [36]. The maximum oscillation frequency ( fmax), which are crossing 0dB of Umax in Fig. 7, are 9THz, 16THz, and 18THz, respectively.

This result reveals that low-power operation is made possible by adopting the HGD pnpn TFETs in highfrequency circuit applications.

In this work, high-frequency characteristics of GAA Ge/GaAs heterojunction HGD pnpn TFET have been analyzed with a particular interest in frequency responses, by device-circuit mixed-mode simulations. The study has been carried out in comparison with devices with ppn and pnpn (but without HGD) channel doping profiles for more stringently verifying the superiority of the pnpn HGD device. Higher current drivability and transconductance and immunity to TAT mechanism were obtained from the pnpn HGD TFET and a common-source amplifier with the device was schemed for having a closer look into the contributions of the device in circuit applications. Voltage characteristics of devices are discussed with details in steps determining the circuit Q-points. At the optimum operating condition, the amplifier demonstrated Av=19.4 dB, funity (frequency at unity Av) =10THz, and fT=0.487 THz, and fmax=18THz GAA Ge/GaAs heterojunction HGD pnpn TFET has a number of advantageous features for driving transistor in advanced integrated circuits for low-power high-frequency applications.