In medium voltage electrical distribution networks, reforming the loss reduction is important, and in line with this, the issue of system engineering and use of proper equipment Expansion of distribution systems results in higher system losses and poor voltage regulation. Therefore, an efficient and effective distribution system has become more important. So, proper selection of conductors in the distribution system is crucial as it determines the current density and the resistance of the line. Evaluation of aging conductors for losses and costs imposed in addition to the careful planning of technical and economic networks can be identified in the network design. In this paper the use of imperialist competitive algorithm; genetic algorithm; is proposed to optimal branch conductor selection and reconstruction in radial distribution systems planning. The objective is to minimize the overall cost of annual energy losses and depreciation on the cost of conductors to improve productivity given the maximum current carrying capacity and acceptable voltage levels. Simulations are carried out on 69-bus radial distribution network using genetic algorithm approaches to show the accuracy as well as the efficiency of the proposed solution technique.

The main objective of an electrical distribution system (EDS) is to provide a reliable and cost-effective service to consumers by considering power quality within standard ranges. Thus, it is necessary to properly plan the EDS and evaluate several aspects such as new equipment installation cost, equipment utilization rate, quality of service, reliability of the distribution system and loss minimization, taking into consideration an increase of system loads and newly installed loads for the planning horizon [1]. There are several parameters to be taken into account to model the conductor size selection (CSS) problems such as: conductor’s economic life, discount rate, cable and installation costs and type of circuit (overhead or underground) [2]. Dynamic programming approach was utilized to solve the CSS problem in [3]. They present models to represent feeder cost, energy loss and voltage regulation as a function of a conductor cross-section. In [4], the conductor size selection was performed with regards to financial and engineering criteria in the feeder. In [5] and [6] the CSS problem is solved using heuristic methods. Reference [5] uses a selection phase by means of economic criteria, followed by a technical selection using a sensitivity index that seeks to ensure a feasible operation of the EDS, whereas [6] presents a heuristic method using a novel sensitivity index for the reactive power injections. The heuristic methods are robust and easily applied; however, they normally converge to a local optimum solution. In some studies, a linear approximation in the calculation of power losses or voltage regulation is considered [7], while approximates the load as a constant current model [3]. In [7], a mixed integer linear model for the problem of conductor selection size in radial distribution systems is presented. In this model, the behavior of the power type load is assumed to be constant. Several studies have used evaluative techniques to solve the CSS problem [8-10]. In [11] the optimal CSS placement is solved using a genetic algorithm. In further studies, aging studies, aging effects of conductor’s lines which are due to weather conditions are not considered.

In this paper, optimal type of conductor selection is proposed for planning radial distribution systems using genetic algorithm (GA). The objective is to minimize the overall cost of annual energy losses and depreciation on the cost of conductors in order to improve productivity given the maximum current carrying capacity and acceptable voltage levels. Moreover, the Backward-Forward sweep method is used which is simple, flexible, reliable, does not require Jacobean matrix and its inverse, and has high convergence speed.

The conductor size selection problem involves determining the optimal conductor configuration for a radial distribution system using a set of types of conductors. Each type of conductor has the following characteristics: 1) resistance per length, 2) reactance per length, 3) maximum current capacity, 4) cross-sectional area and 5) building cost per length.

Where ΔP and ΔQ are called the mismatch equations:

And J is a matrix of partial derivatives known as a Jacobian:

The linearized system of equations is solved to determine the next guess (m + 1) of voltage magnitude and angles based on:

A rough outline of solution of the power-flow problem is:

The Backward sweep updates currents using Kirchhoff's Current Law (KCL), and the Forward sweepupdates voltage using voltage drop calculations [12]. The Backward Sweep calculates the current injected into each branch as a function of the end node voltages. It performs a current summation while updating voltages. Bus voltages at the end nodes are initialized for the first iteration. Starting at the end buses, each branch is traversed toward the source bus updating the voltage and calculating the current injected into each bus. These calculated currents are stored and used in the subsequent Forward Sweep calculations. The calculated source voltage is used for mismatch calculation as the termination criteria by comparing it to the specified source voltage. The Forward Sweep calculates node voltages as a function of the currents injected into each bus. The Forward Sweep is a voltage drop calculation with the constraint that the source voltage used is the specified nominal voltage at the beginning of each forward sweep. The voltage is calculated at each bus, beginning at the source bus and traversing out to the end buses using the currents calculated in the previous Backward- Forward sweep Flowchart of the method depicted in Fig. 1 [1, 17, 20]. 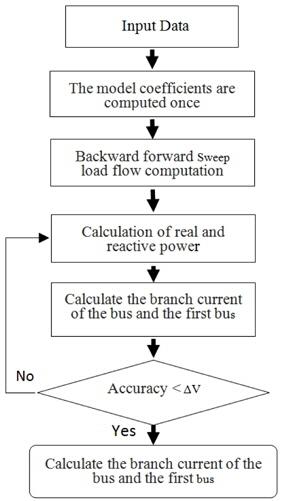 Conductors from the construction phase to the operational phase of destruction are affected by a variety factors such as wearing damage and it's finally decided to enter the power network or utility side. Evaluation conductors of electrical distribution networks have a very important role in asset management systems. In this paper conductors case study are used in Kosar feeder, Zafar substation networks, with 18.74 Km of the Kerman area Inclusive conductors such as Hayna (A=126 mm2), Doug (A=120 mm2) and Mink (A=70 mm2). Also, information of aging conductors was collected 2 meters. According to the information network each section was determined by the electricity distribution network. After collecting the conductors cable of Kerman area, resistance and corrosion rate were measured. Conductor resistance test results for each of the years are indicated in Table 1.

The objective is selection of conductor’s size from the available size in each branch of the system which minimizes the sum of depreciation on capital investment, cost of energy losses and improvement reliability while maintaining the voltages at different buses within the limits. In this case, the objective function with conductor c in branch i is written as

Where Kp is annual demand cost due to Power Loss ($/kW), KE is annual cost due to Energy Loss ($/kWh), δ is Loss factor, ( PL (i,c) ) is real Power Loss of branch i under peak load conditions with conductor type c and T is the time period in hours (8760 hours). Depreciation on capital investment is given as

Where γ is Interest and depreciation factor, Cc is cost of type conductor ($/km), (Ac) is cross-sectional area of c type conductor and Li is length of branch i (km).

Where CENS the cost of energy not supplied ($); Ui: i mean outage times a year (hour/year); Cost_Shedi : Cost of outage time ($/Kwh). PLi Average time to confirm any of the loads of the network is obtained from the following equation

λij : Number of failures per year for equipment failures that result in lost time, i is the j.rj : The average time required to fix your equipment after each fault j (hour).

GA’s are generalized search algorithms based on the mechanics of natural genetics [14]. GA maintains a population of individuals that represent the candidate solutions to the given problem. Each individual in the population is evaluated to give some measure to its fitness to the problem from the objective function. GA’s combine solution evaluation with stochastic operators namely, selection, crossover and mutation to obtain optimality.

1) Selection: Select two parent chromosomes from a population according to their fitness. Chance for the better fitness individual to be selected is higher to produce the next generation with the higher fitness value.

2) Crossover: The crossover operator involves the exchange of genetic material between chromosomes (parents), in order to create new chromosomes (offspring). Various forms of this operator have been developed. The simplest form, single point crossover, is shown in Fig. 3. This operator selects two parents, chooses random position in the genetic coding, and exchanges genetic information to the right of this point, thus creating two new offspring.

3) Mutation: The mutation operator, in its simplest form, makes small, random, changes to a chromosome. For a binary encoding, this involves swapping gene 1 for gene 0 with small probability for each bit in the chromosome, as illustrated in Fig. 4.

The flow chart of proposed GA is depicted in Fig. 1. 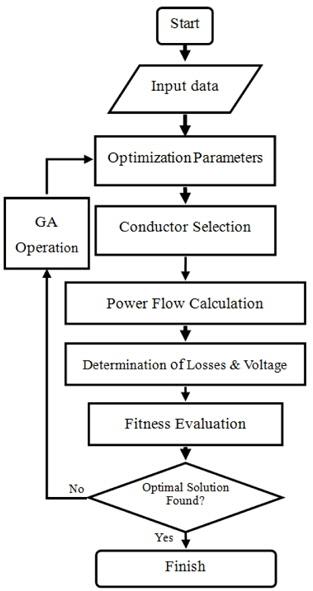 Simulations are carried out on 69-bus radial distribution network using GA approach in order to show the accuracy as well as the efficiency of the proposed solution technique. The single line diagram for proposed radial distribution systems is shown in Fig. 2. Length of all branches is considered to be equal to 60m. The properties of the new conductors used in the analysis of this system are given in Table 2. The initial data for load flow solution based on the Backward-Forward sweep are selected as: Vbase= 20kV and Sbase = 1000kVA. The other parameters used in computation process are: KP = 1.04 ($/kW); KE = 0.012 ($/kWh).

The parameters used in GA algorithm are: Number of iterations is 33; Population size is 100; Cross over probability is 0.8; and Mutation probability is 0.01, Vmin for any bus= 0.95 and Vmax for any bus= 1.05. Also, loss factor is 0.2, which represents adequately the energy losses for the load level in terms of the maximum power losses. The results of conductor selection are shown in Table 3. Convergence values for GA fitness functions are illustrated in Fig. 7. 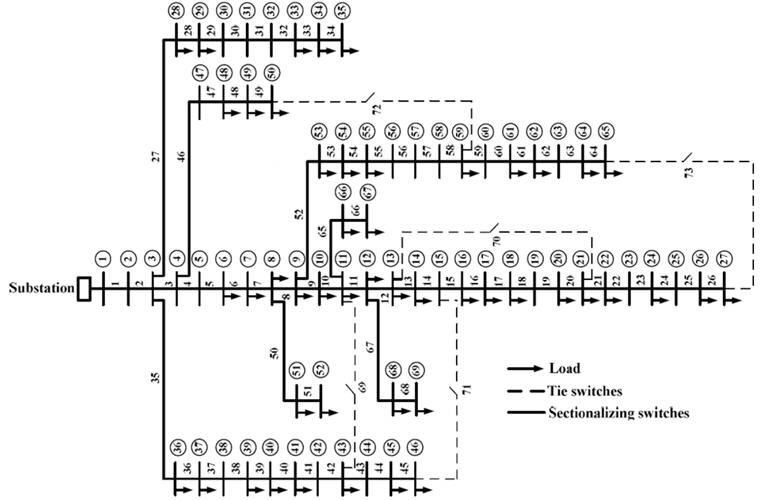 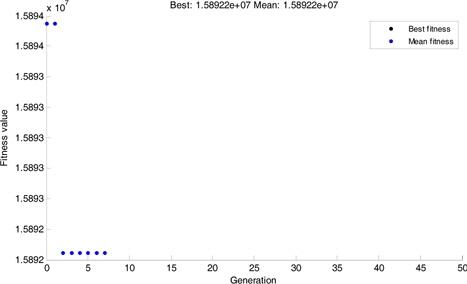 The voltage profile of nodes and power loss profile of branches in the system after GA implementation are compared with Conventional conductor design and depicted in Figs. 8 and Fig. 9. It can be seen that the voltage profile achieved by GA optimization algorithms are almost the same although they show better improvement in comparison with Conventional method. Moreover, a decrease in peak power loss based on peak power loss profiles is illustrated. The total power loss is shown in Fig. 10 and the costs based on conductor selection are compared in Table 4. The real power loss reductions are 579.4903 kW, which is approximately 5.4% in comparison with the Conventional design for GA respectively. Proceeding in a similar manner, the total cost reduction (sum of annual cost of power loss and depreciation on capital investment cost) are obtained 27% for GA respectively. 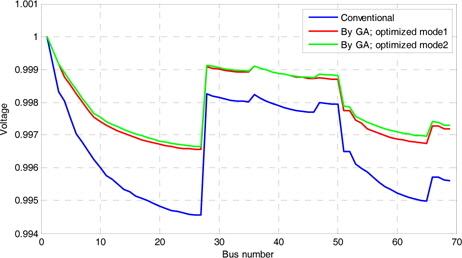 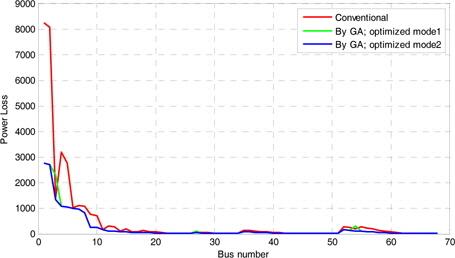 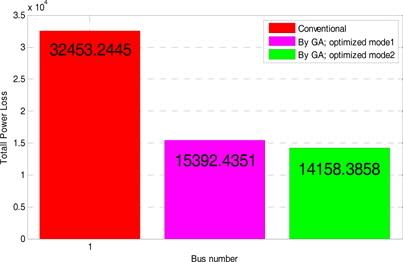 Optimal selection of conductor type for planning radial distribution systems using evolutionary approaches is presented with the objective to minimize the overall cost of annual energy losses and depreciation on the cost of conductors in order to improve productivity. The power losses, voltage magnitude, and current flow magnitudes are calculated using the Backward-Forward sweep method.

The performance of the proposed evolutionary approaches (GA) in comparison with a conventional method is investigated using a 69-bus radial distribution network. The power loss reduction and voltage profile improvement has been successfully achieved which demonstrates the effectiveness of the proposed approaches. The results offer the potential of using GA for improving plant productivity and economy.