Bus bar is one of the most primary elements of a power system connecting a variety of elements like generators, transmission lines and loads. Bus bars have been traditionally used in switchgears, control gear assemblies and for power distribution in buildings. Bus bar provides a wide variety of interconnection methods and improves thermal characteristics.The temperature rise of bus bar system is a vital factor that has an adverse effect on its performance. The amperage, cross sectional dimensions, layout and conductivity of the bus bar are the factors that determine the rate of heat generated in the bus bar. A fault in the bus bar due to increase in temperature leads to loss of all the components connected to it. The protection scheme of bus bar should be fast, reliable and stable. In order to design a power apparatus such as the bus bar, the current carrying capacity (or ampacity) should be exactly valued since it is limited by maximum operating temperature. Finite-element method was used to solve the governing thermal equations.

Contact resistance between copper conductors and corresponding temperature rise was measured. It was found that there was very little difference between the temperature rises at the measuring positions in the same phase. The bus bar temperature increases linearly with the increase in the insulation material thickness [1]. Harmonic eddy current analysis is carried out and the power losses are calculated in the conductor and enclosure tank. The accuracy of both methods is verified by the comparison of the measured and calculated temperature in a single phase and three-phase GIB [2]. The analysis used to calculate the temperature rise in the bus bars of switch gear using CFD (Computational Fluid Dynamics) techniques. The values obtained by computational analysis compared with experimental results. These results can be employed while designing the switch gear to minimize the bus bar chamber. [3].

A new technique has been developed that can be used to estimate the temperature rise in the extra high voltage bus bar. The heat transfer coefficient was calculated according to the model geometry and varying temperature coupled with the finite element method [4]. Evaluation of the impedance of bus bar systems with ferromagnetic enclosures, impedance was modelled by averaging phase resistance and effective reactance obtained from the measured data. It was found that the discrepancy of impedance was very small and it was less than 2% [5].

The parametrical analysis of rigid bus bar short circuit calculation has been compared to those obtained from the corresponding IEC 865/1993 standard. The results showed minimal differences between the two methods [6]. Magneto fluid-thermal fields of 3-phase/4-pole air-insulated bus bar trunking system, was non-ventilated and enclosed by steel shielding.

It was found that the maximum error of temperatures between simulation results and experiment results was about 9.5℃. Moreover, bigger the size of the steel shielding, lower is the temperature rise of the bus bar [7]. By applying the Nusselt number considering material constant and model geometry for natural convection, the temperature predicted by coupled magneto thermal analysis showed good agreement with the experimental data [8]. The analysis used to calculate the temperature rise in the bus bars of switch gear. The values obtained by computational analysis compared with experimental results. These results can be employed while designing the switch gear to minimize the bus bar chamber [9].

In most of the research publications, temperature rise in bus bar system are studied and discussed for the general configuration like rectangular, square and cylinder. In this Paper, temperature rise in the bus bar which is used in panel board of an educational Institution in which load variation is very much as it distributes the power for both laboratories of different branches, hostel and quarter facilities. This paper deals with a practical application and study the temperature variations dynamically both during base load and peak load conditions.

When steady state source current flows through the three phases of the bus bar system. To analyse the losses and study the temperature rise in the bus bar, magnetic analysis is necessary to study the eddy current developed in the nearby conducting material. Magneto static governing equation is given as

Where is source current and is eddy current. The eddy current in the conducting material is

From the above equation, we can write the governing equation as

Considering the z-directional current, we write the governing Eq. (1) as

The experimental observations have been taken in the power house of Kumaraguru College of Technology, Coimbatore.

The power house has the capacity of 500A rating and 1000 KVA transformer substation. In the transformer the voltage is step down to 440V for distributing to the load centres. These arrangements are done in an enclosed chamber made of steel with minimum amount of ventilation. Low tension voltage is drawn from the transformer using high stranded cable to the panel underground. The conductor used in the panel board is copper. The power from the panel is given to various sub stations. The current rating of the bus bar depends on the volt ampere rating.

In the Eq. (11), hr is the radiation heat transfer coefficient and is expressed as

Heat generation due to the resistance to the current flow is Q = I2R(t) . The current carrying capacity of the bus bar is limited by the maximum operating temperature.

Energy balance equation can be written as

Then energy balance equation is developed as

This differential equation shown in Eq. (15) can be solved to obtain the steady state result of the temperature by assuming current as the input parameter.

Eq. (17) is similar to the differential equation.

Solution for the above given differential equation is 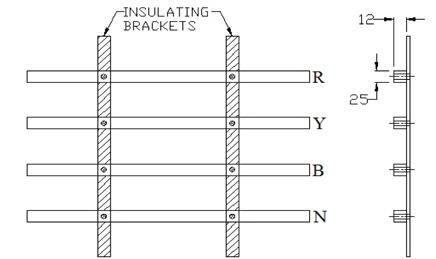 A less complex approach for the calculation of the transient temperature exists, but it has several limitations that restrict its application and accuracy. Parameters considered in the Eq. (17) are calculated and tabulated in the Table 1. 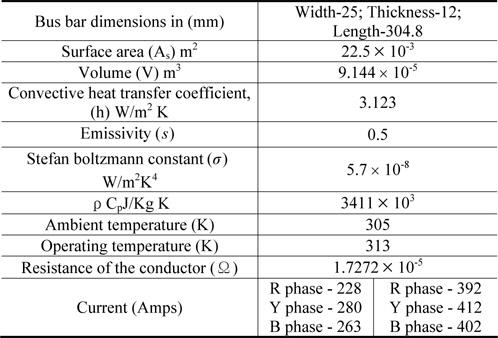 With the parameters given in the Table 1 and numerical analysis is performed for the Y phase with current rating of 280 Amps hence Eq. (17) is simplified in terms of time as given below.

For these restrictive assumptions, the temperature of bus bar material can be expressed in terms of a thermal time constant

The thermal time constant “τ” in equation can be denoted as a function of the thermal capacitance of the bus and both the radiative and convective thermal resistances from the surface of the bus bar.

The thermal time Constant is,

Where T is a fixed reference temperature used to calculate the radiative resistance whose value can be estimated for the average temperature of (T + T∞)/2. Eq. (22) shows that the thermal time constant is a function of the convective heat transfer coefficient (h), the geometry of the bus (V/As), the ambient temperature T∞. Also it is the function of the reference radiative temperature (steady state temperature) T, the bus emissivity ε and the thermal capacity ρCp. Conditions which lead to a smaller heat loss from the surface and bus design with a larger ratio of volume to surface area (or ratio of cross-sectional area to perimeter) will lead to longer time constants. By substituting the above said parameters and one time constant τ is calculated as τ = 2077 seconds. Transient temperature rise for multiples of time constant τ, 2τ, 3τ, 4τ etc are found from the Eq. (20). Iteration starts at Ti = 32℃

Table 2.Comparison of observed and calculated steady state temperatures for base load current 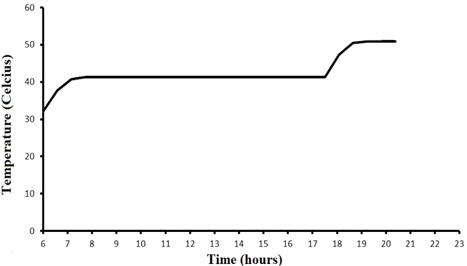 This bus bar could withstand the temperature of steady state value for about four hours. This high level is attained at the interval between 5.30 pm and 10.30 pm. The bus bar has been made of copper which can withstand even at the high temperatures of about 100℃. But due to high temperature there is a chance of the material being corroded and the change in the color of the bar due to excessive oxidation at the bolted joints. From the observed and calculated results it is discussed that the rating of the bus bar dimensions should be changed to the next recommended dimensions to keep the bus bar within the safe limit. Otherwise more ventilation needs to be provided in the feeder section for the circulation of air at the high temperature bolted joints. The observations are carried out in the panel board for the institution power distribution system (for both institution and hostel facilities) in which load variation suddenly increases to maximum current rating in the evening hours (5.30 to 10.30 pm).

Hence it is necessary to study the transient temperature variation and maximum steady state temperature of the bus bar conductor.

Also it is necessary to study the temperature variation in different phases. Phase R in extreme outside is exposed to the atmospheric air where as Y phase in between the phases R and B. Hence phase Y will be affected by the electromagnetic field of the phase R and B and convection heat dissipation from the phase Y will be less compare to phase R.

From this study, it is concluded that bus bar conductor which is in between the other two phases will have the higher thermal stresses and also affected by the eddy current.

In this study, simplified mathematical model has been developed by considering the thermo physical properties and convective heat transfer coefficient of all three phases of the bus bar and also involve the time constant. Results obtained from the modelling shows the temperature variation in different phases of the bus bar for different current rating in each phase which consistently matches with the observed values. The model can be simulated for different configuration of bus bar sizes. (width and thickness of the bus bar) so that size of the bus bar can be optimized. The simplified expression can be used to estimate the transient thermal behaviour of the bus bar when it experiences step change in current due to the load variation in terms of time constant.