In a single-phase grid-connected power system consisting of a DC/DC converter and a DC/AC converter, the current drawn from renewable energy sources has a tendency to be pulsated and contains second-order frequency ripple components, which results in several drawback such as a power harvesting loss and a shortening of the energy source's life. This paper presents a new second-order harmonic current reduction scheme with a fast dc-link voltage loop for two-stage dc-dc-ac grid connected systems. In the frequency domain, an adequate control design is performed based on the small signal transfer function of a two-stage dc-dc-ac converter. To verify the effectiveness of proposed control algorithm, a 1 kW hardware prototype has been built and experimental results are presented.

With increasing demand for clean and infinite energy resources, renewable energy sources, like photovoltaic, fuel cell and wind power, have experienced rapid growth over the past few years [1, 2]. One of the prospective uses for renewable energy sources is the installation of distributed power systems to the existing power grid for supplying adequate energy. The distributed power systems include a power electronics converter to improve a system’s performance and reliability.

In a single-phase grid-connected power system, consisting of a DC/DC converter and a DC/AC converter, the converter has a pulsated instantaneous output power as shown in Fig. 1. If the DC/AC converter has a large enough dc-link capacitance, the capacitor can smoothen the dc-link voltage, but the input current will have low frequency ripple components, where the frequency corresponds to the second-order frequency. This low frequency current ripple flows into a renewable energy source, and finally gives large negative effects on the energy harvesting and energy source’s expectancy.

In order to reduce the low frequency current ripple at renewable energy sources, several-schemes such large electrolytic capacitors, usually in the range of mF [3], extra power decoupling circuits [4-7] and active power filters [8] have been proposed in prior studies, and some of them are popularly used because of their simplicity and effectiveness. However, the schemes that use extra circuits grapple with the problems of a short system lifespan, large volume or high cost. Active control schemes using existing dc-link capacitors in a two-stage dc-dc-ac converter, can suppress these difficulties. Some authors proposed a feed forward compensator [9], and the compensator produced a ripple cancellation duty ratio based on the correlation between the instantaneous output power and the dc-link voltage. However, this has the drawbacks of poor disturbance rejection and robustness in terms of parameter variations. These are inherent problems commonly found in most feed forward compensators. These demerits were solved by the proper design of a two-loop feedback compensator [10]. However, this scheme leads to the problem of slow dynamics in the outer voltage loop. This slow dynamics causes a slow transient response of the dc-link voltage. Moreover, the dc-link capacitor may experiences large overshoot or undershoot voltages unless the dc-link capacitor is sufficiently large.

In this paper, a novel low frequency current reduction scheme is presented. The proposed scheme is based on the common two-loop feedback scheme, but reconstructs the control structure by changing the feedback control configuration. The superiority of proposed control mechanism especially in terms of the faster dynamics of the outer voltage loop is verified by investigating the fundamental mechanism. A quasi-notch filter is adapted to improve the control structure and to alleviate hardware implementation concerns. A proper control design of the two-stage DC/DC/AC converter is presented based on small-signal modelling, and several experiments are performed to verify that the proposed scheme achieves a ripple-free dc current from renewable energy sources. The experiments also verify that it has much faster dynamics in terms of the dc-link voltage loop with a fast settling time. In addition, maximum power point tracking (MPPT) experiments are performed to demonstrate the superiority of the propose scheme.

2. Principle of Proposed and Conventional Scheme

Fig. 2 represents a two-stage DC/DC/AC grid-connected power system with the proposed low frequency current reduction scheme for a single-phase electrical utility. A non-isolated type DC/DC boost converter is used to maintain a sufficiently high dc bus voltage, vd, even when renewable energy sources drop to low voltage levels. For the second-stage converter, a single-phase DC/AC fullbridge inverter topology is used and the output current, is, is regulated with the output inductor, Ls. The input current of the DC/DC boost converter, ig, is controlled by the dc-dc converter’s control loop. In the DC/AC inverter control loop, the current compensator, Cis, regulates is in accordance with its reference, is*. The dc-link voltage, vd, is regulated by the outer voltage loop, denoted by a dotted line. 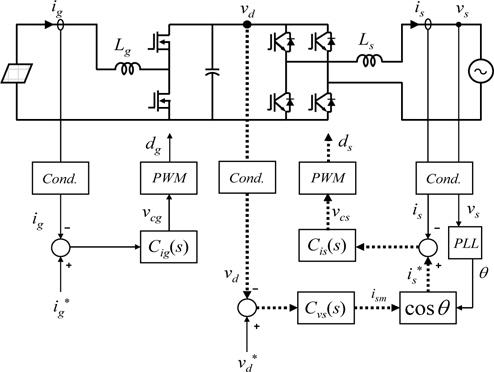 As seen from Fig. 2, the current reference, ig*, of the DC/DC converter is given externally in the proposed scheme. Thus the current control loop achieves total isolated from the dc-link voltage. With the isolated control structure, the interference, caused by the dc-link voltage, can be eliminated against a ripple-less dc current regulation. Thus the control structure provides more a favorable control platform for achieving fast dynamics in the voltage loops, while providing low frequency ripple current reduction.

2.2 Comparison of conventional and proposed scheme

Fig. 3 shows the control structure for the conventional scheme introduced in [10]. In this scheme, the current loop is coupled with the voltage output loop. Even with a large capacitor, the dc-link voltage, vd, contains some low frequency ripple components. As a result, the outer voltage loop is easily disturbed by these low frequency components, unless the voltage loop is designed with a strong attenuation in the low frequency region. In a previous study of [10], in order to achieve a strong attenuation, the voltage compensator was designed with a low crossover frequency at the expense of the dynamic response. 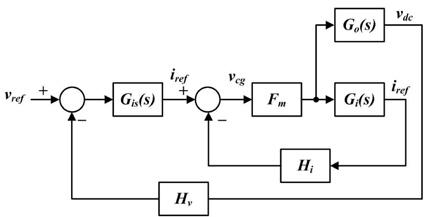 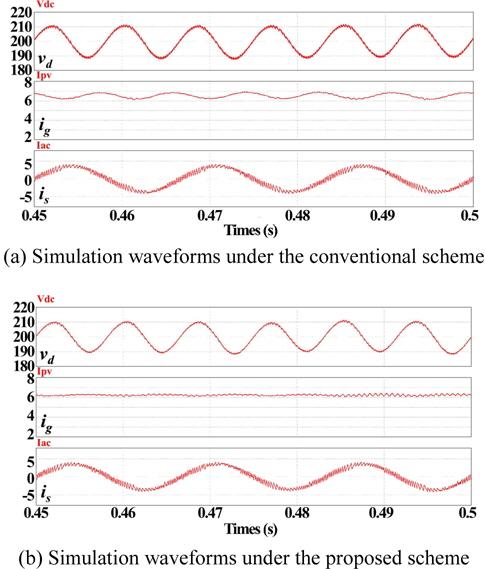 3.1 Properties of the quasi-notch filter

The current loop of the dc-dc converter requires a proper design with an extremely high loop gain at the second-order frequency to achieve an effective low frequency current ripple reduction. With a sufficiently high control loop gain, the current, ig, becomes a ripple-less dc current by suppressing the impact of the low frequency ripple current.

However, designing with a high gain is impractical due to several difficulties such as component tolerances, temperature variations, and parasitic effects. An alternative way to achieve a current ripple reduction is to design the voltage loop gain of the DC/AC inverter so that it is much smaller than the current loop gain of the DC/DC converter. As a promising solution, this paper adapts a quasi-notch filter, which provides strong attenuation in a specific frequency range, to the outer voltage loop of the DC/AC inverter, and consequently, it provides a sufficiently small loop gain of the voltage loop, while permitting a high crossover frequency with fast dynamics. 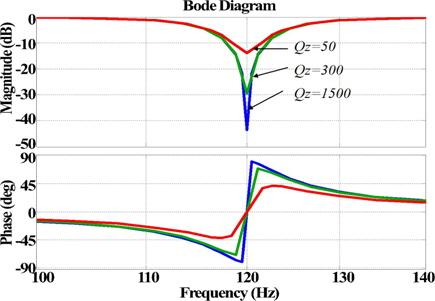 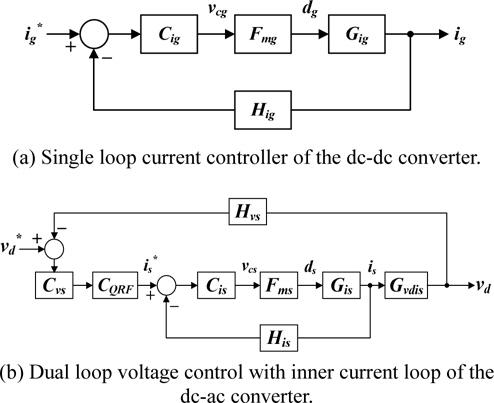 After deriving the small-signal transfer functions, proper compensators are designed in the frequency domain. Fig. 7 and Fig. 8 show the compensator design results of the dc-dc converter and the dc-ac inverter in gain/phase plots. The compensators are designed with the following circuit parameters: vg = 50~70V, vd = 250V, vs = 110V, Lg =3.3mH, Cd = 1880μF, and Ls = 3mH, which correspond to the 1kW hardware prototype specifications used in the experiments. 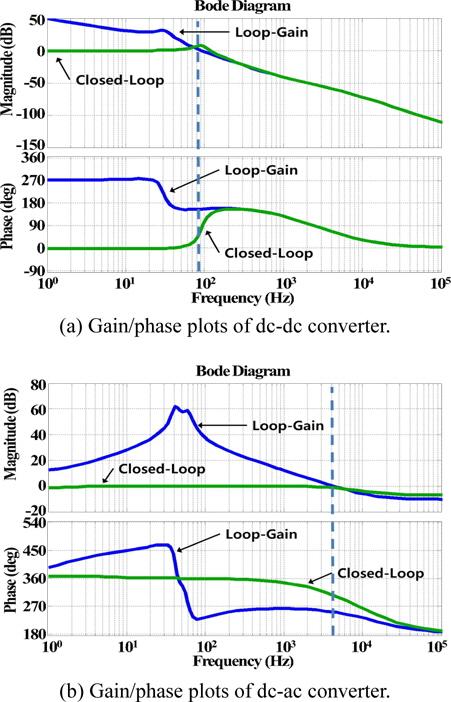 Fig. 7.Loop gain and closed-loop response of the current loop 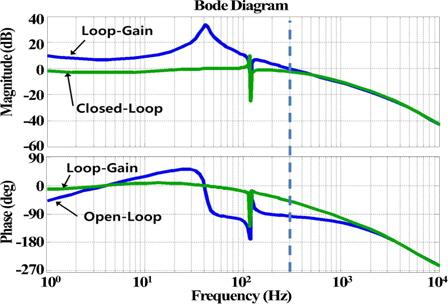 A 1 kW hardware prototype has been built to verify the proposed control scheme, as shown in Fig. 9, and a digital signal processor is used to implement the proposed compensators. A programmable dc power supply equipped with solar array simulation (SAS) control software from Regatron is used to emulate the renewable energy output of a PV array. The dc-link command is set to 250V. 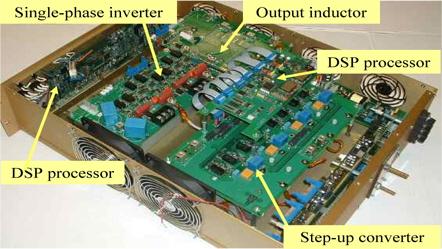 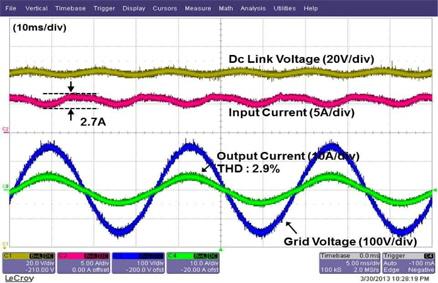 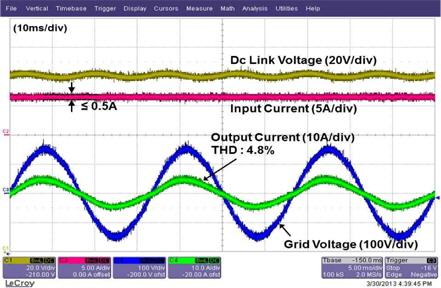 On the other hand, with the proposed low frequency current reduction scheme, shown in Fig. 11, the input current achieves a ripple-free dc current since the dc-link capacitor takes over most parts of the ripple components. This is due to sufficient attenuation of voltage loop gain by the quasi-notch filter. In the proposed scheme, the THD of the output current is slightly higher at 4.8%. However, this still satisfies international standards and regulations.

Fig. 12 shows the transient responses of the proposed and conventional schemes. Fig. 12(a) is the experimental result under the conventional scheme with a 2 Hz crossover frequency, and Fig. 12(b) is the test result under the proposed scheme. It is clearly seen that the proposed scheme of Fig. 12(b) exhibits improvements in terms of a fast transient response, due to the high crossover frequency of the voltage control loop. 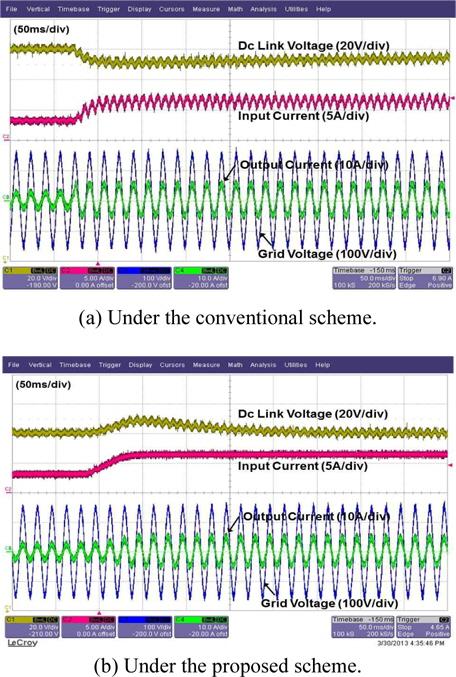 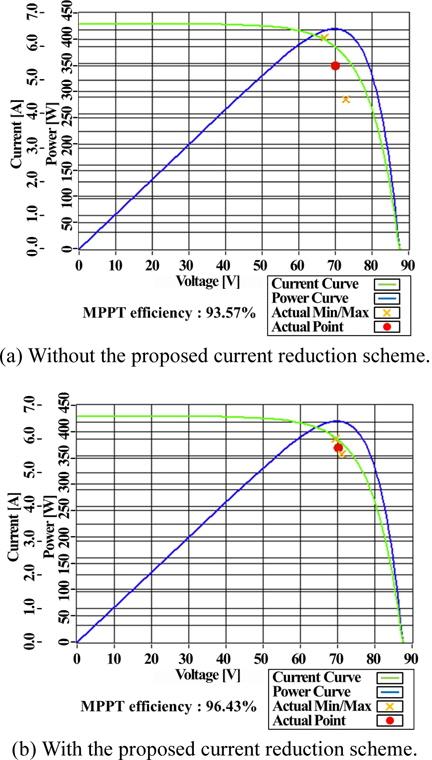 In this paper, a novel low frequency current reduction scheme is proposed for a two stage DC/DC/AC gridinterconnected power system. By isolating the current closed loop of the DC/DC converter from the dc-link capacitor and incorporating a quasi-notch filter into the voltage loop of the DC/AC inverter, a fast dc-link voltage control can be achieved. The fundamental theory of the proposed control scheme was introduced, and its superiority in terms of achieving fast dynamics was clearly explained. The experimental results show that the novel current reduction scheme achieves a ripple free dc input current with a fast dc-link voltage regulation, and thus reduces the settling time of the dc-link voltage control.