The rotor overhang is used to enhance the air-gap flux and improve the power density. Due to the asymmetry in the axial direction caused by the overhang, a time consuming 3D analysis is necessary when designing a motor with overhang. To solve this problem, this paper proposes an equivalent magnetic circuit model (EMCM) which takes account overhang effects without a 3D analysis by using effective air-gap length. The analysis time can be reduced significantly via the proposed EMCM. A reduction in the analysis time is essential for a preliminary design of a motor. In order to verify the proposed model, a 3-D finite-element method (FEM) analysis is adopted. 3-D FEM results confirm the validity of the proposed EMCM.

Permanent-magnet (PM) brushless machines are increasingly being used in various applications, such as electric vehicles, industrial servos and in wind power generation systems [9]. This increased popularity is due to their high torque, high power density, high efficiency, and low maintenance requirements as a consequence of the use of PM materials in the rotor. Surface-mounted permanentmagnet (SPM) motors have the advantages of low torque ripple and low cogging torque as compared with interior permanent-magnet (IPM) machines.

The overhang is defined in this paper as a configuration that the rotor length is longer than the stator length in the axial direction. In general, the overhang structure is used to enhance the air-gap flux and improve the power density while utilizing the free space caused by the stator end winding [29]. A 3-D finite-element method (FEM) is necessary to analyze the magnetic fields in the axial direction for a proper consideration of the overhang effects. Although FEM can precisely obtain the magnetic flux distribution and electromagnetic performances of electrical machines [22-24], it is time consuming and computationally expensive, especially at pre-design stages.

In the case of SPM motors, an EMCM required to predict the air-gap and magnet flux density analytically has been developed while taking into account the leakage flux around the magnets in the rotor [18]. However, overhang effects in SPM machines with rotor overhang are presently not included in the EMCM. In this paper, we propose an EMCM considering not only the leakage flux in the rotor but also the overhang effects for SPM machines with rotor overhang. A 3-D FEM analysis is used to verify the proposed model.

Although the effects of the stator slots have been taken into account [10-12, 14, 16-18, 25, 26, 32], an EMCM which disregards slotting effects was developed in order to focus on the overhang effects and simplify the analytical model in this paper. It is assumed that the effects of saturation within the core are negligible, as the magnetic flux density within the core is low in general and because normally there is no significant saturation. 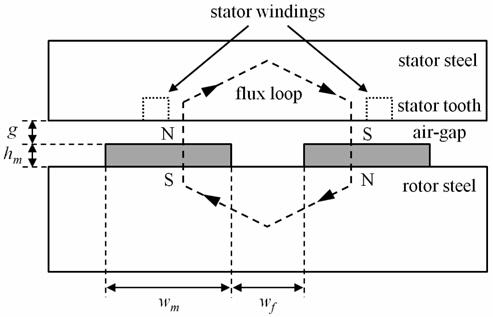 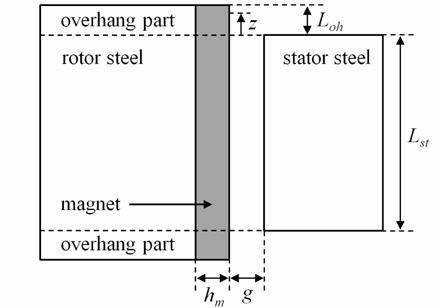 Fig. 2.Configuration of a motor with overhang

An EMCM based on the analytical model developed by Qu et al. considering overhang effects as well as air-gap leakage fluxes is proposed. Fig. 3 shows the proposed EMCM. The variables shown in Fig. 3 are defined as follows: 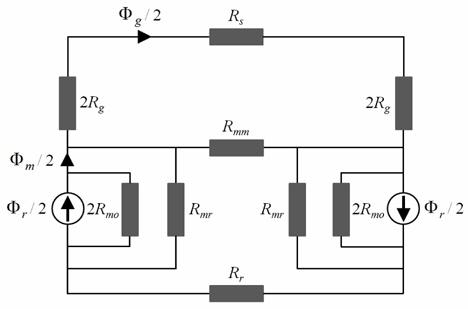 Rr and Rs can be ignored due to the assumption mentioned earlier. Fig. 3 can be simplified into Fig. 4 through the use of symmetry. In Fig. 4, Rm is calculated from Fig. 3 as 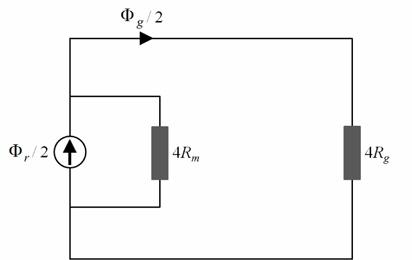 For the EMCM considering the overhang effect, the effective air-gap length should be defined. Flux lines between overhang structure and stator core are modeled with consideration for the distribution of magnetic flux density in the air gap. Fig. 5 shows modeling of flux lines in the air gap with a circular arc and a straight line. The magnetic flux distribution in the air gap which is calculated through FEM is shown in Fig. 6. The effective air-gap length is derived via the modeling of flux lines with a circular arc and a straight line as 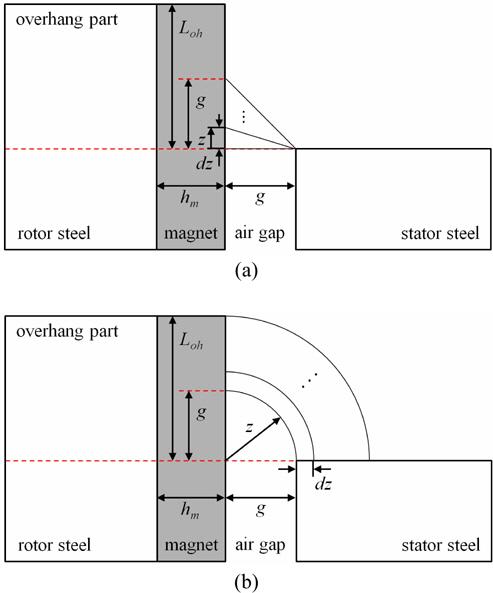 Fig. 5.Modeling of the flux lines in the air gap with a circular arc and a straight line: (a) A straight-line permeance model; (b) A circular-arc permeance model 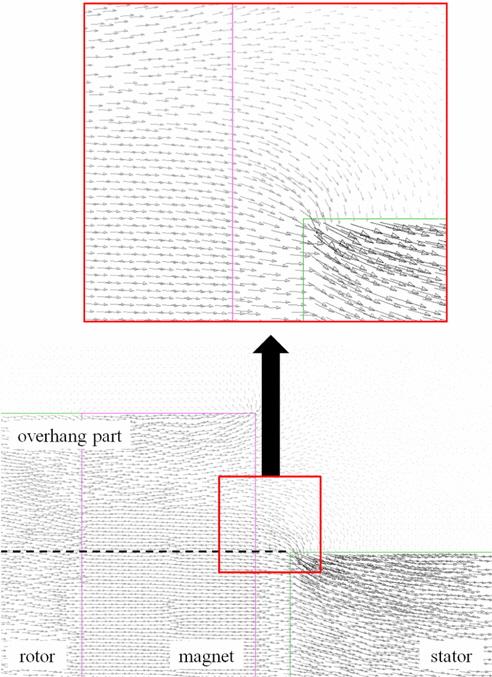 where z is the position in the overhang, as shown in Fig. 5, and g is the air-gap length.

Using the equations above and the reciprocal relationship between the permeance and reluctance, the reluctances are calculated as follows:

According to the flux division, the air-gap flux and the flux from the magnet can be derived as 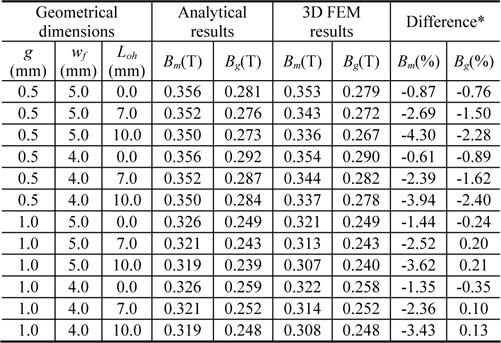 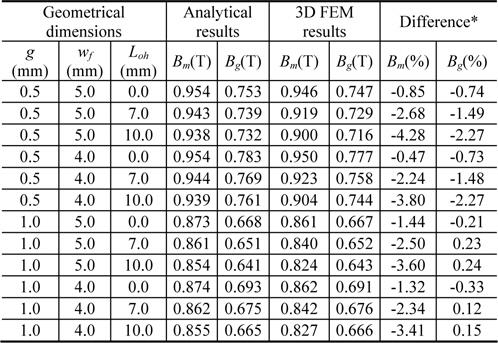 As shown in Table 1 and Table 2, there is little difference between results of the motor employing the ferrite magnet and the rare earth magnet. The accuracy of the EMCM is affected by Loh. As the length of the overhang increase, the leakage flux at the end of the overhang is increased and the estimation of the magnetic flux path becomes difficult. This increases the difference between the analytical results and the FEM data. In cases in which Loh is less than 7 mm, the differences of Bm and Bg are less than 3% and 2%, respectively. The differences of Bm and Bg are respectively less than 5% and 3% when Loh is 10mm.

In the condition with same stator stack length, the total flux passing through air-gap increases when Loh increases. However, the average flux densitiesBm and Bg decline as the overhang increases, as shown in Table 1 and Table 2, this is because the area is more increased compared to the flux. In cases in which Lst is 100 mm, the total flux passing through the air gap increases by about 11% and 15% when Loh is 7 mm and 10 mm, respectively.

This paper is noteworthy in that the time for design of SPM machines can be reduced remarkably via the reduction of time for initial design by using the proposed EMCM, which is analytical method considering overhang effects.