This paper attempts to design and present a comparison of classical Direct Torque Flux Control (DTFC) for Line-Start Permanent Magnet Synchronous Motor (LSPMSM) and its equal Permanent Magnet Synchronous Motor (PMSM). In order to present an in-depth analysis, both motors for DTFC Voltage Source Inverter (VSI)-fed in the same situations of different conditions are simulated and tested. The advantages of the proposed method for LSPMSM over the PMSM are discussed and analyzed.

In the past, DC motors were highly used for speed control applications. However, thanks to recent advances in power electronic devices, AC motors are now extensively employed in Adjustable Speed Drives (ASD) [1]. In this regard, because of their simplicity, ruggedness, reliability, and volume manufacturing, IMs have widely been applied in these applications. Because of the heavy usage of electrical energy, the efficiency of IMs becomes a vital issue. In IMs, the existence of slip and rotor copper losses degrades the motor efficiency and Power Factor (PF)[1-3].

Rotor slip power losses are absent for Synchronous Motors (SMs), and as a result, SMs which naturally are able to provide both reactive currents and synchronous speed (for different loads) have a higher efficiency and PF than IMs. Nevertheless, they have a higher volume and cost rather than IMs. That is why, PMSMs are employed, and decreasing price and improved performances of Permanent Magnets (PMs) make them more interesting than in the past [1-4]. On the other hand, PMSMs, albeit their higher performance, produce a magnet brake torque that has a repercussion on its starting. In this way, PMSMs are not able to start with the mains, and LSPMSMs which are synchronous hybrid PM / reluctance highefficient motors are designed to solve this issue [5-6]. The flux of PM materials is selected based on a compromise between its operation near the unity PF and solving starting issues.

LSPMSMs have a rotor cage for induction starting and PM materials, providing synchronous torque, and they are suitable candidates for substituting IMs and PMSMs. Recently, research accelerated to evaluate different performance aspects of LSPMSMs and equal IMs [7-9]. However, a comparison between LSPMSMs and PMSMs has not been reported yet.

LSPMSMs are also being developed for various applications, especially ASD applications [9-10]. However, as far as the authors are aware, so far any known control-based measure in ASD applications for threephase LSPMSMs has not been designed yet. In [10], a sensor-less vector control has been designed just for a single-phase LSPMS. Unlike vector control, DTFC technique does not need any current controller or coordinate transformation. The DTFC, which is robust against the machine and load parameters, provides a fast torque response with a simple structure, and thus it has been much progress, developed, and improved during the past decades [1, 11]. Therefore, a classical DTFC method hereby is designed for LSPMSMs, and the application of this method for a three-phase LSMPSM is analyzed and compared with the equal LSPMSMs. The simulation results of identical situations and equal controllers from MATLAB / Simulink software when these motors are connected to the same VSI show that particularly for LSPMSM, this method has a distinctive impact on its dynamic and steady-state performance.

This paper is organized as: in section two, modeling and description of LSPMSMs and PMSM principles are reviewed. Section 3 devotes to design a simple DTFC method for both PMSM and LSPMSM. In section 4, to verify the presented control system, model of a four-pole three-phase PMSM and its equal LSPMSM along with the same situations are simulated for DTFC VSI-fed in the MATLAB/SIMULINK software.

Since LSPMSM employs a squirrel cage rotor of IM and PM materials, a prototype of the original model as well as rotor cross sections of IM and LSPMSM is shown in Fig. 1. In general, LSPMSMs unite the merits of IMs (robust construction with respect to disturbance and line-starting ability) and PMSMs (high values of torque per unit current density, PF, and efficiency).

Fig. 1.a. A prototype of the original model, and rotor cross sections of b. IM, c. LSPMSM.

Although their self-starting capability for fixed supply voltages is one of the most frequently cited advantages of LSPMSMs over PMSMs, these motors are hereby compared when they are connected to the same VSI. For this purpose, first, the models of these motors are reviewed. Then, the DTFC method for these motors is designed and simulated.

where the d – q – 0 axes stator variables (Vds, Vqs, V0s), (ids, iqs, i0s), and (λds, λqs, λ0s), are the stator voltage, current, and flux, respectively. The equivalent magnetizing flux and current of the PM referred to the stator side are i′m and λ′m. In addition, p is the derivative operator, and rs and Lls are stator resistance and leakage- inductance, and Lmd and Lmq are magnetizing inductances of direct and quadratic axes, respectively. Eqs. (1)-(2) put forward the equivalent circuits shown in Fig. 2. The mechanical equations are also expressed as: 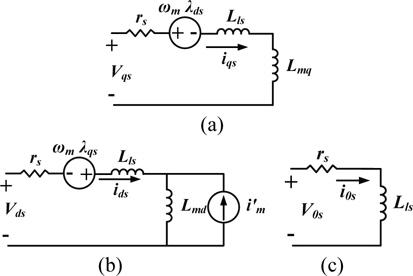 where ωm and P are the angular speed and the pole numbers, respectively. Finally, Te, TLoad, B, and J are the electromagnetic and load torques, friction coefficient, and moment of inertia, respectively. In addition, Texc and TRel, which are respectively excitation and reluctance torques, are defined as:

Because of the rotor windings, the equations of stator voltage, rotor voltage, stator flux, and rotor flux for LSPMSM are obtained as:

The equivalent circuits shown in Fig. 3 are obtained based on (6)-(9). In [2], the rotor windings shown by notation r have not been used. Instead, the damper windings and notation k were employed. Again, the mechanical equations of LSPMSM are expressed as: 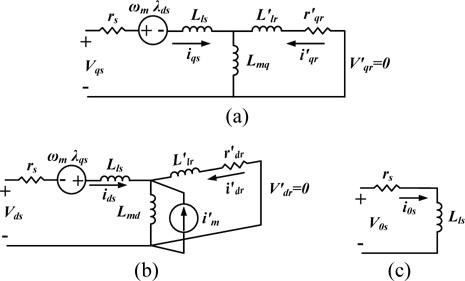 The electromagnetic torque of LSPMSM, expressed in (10), can be re-writtent as (11), and it is developed into three components: reluctance, excitation, and induction torques.

where Tind is the induction torque in LSPMSM, and it is defined as follows:

Clearly, equations of reluctance and excitation torques are the same as those of PMSMs, and induction one is also called asynchronous or cage torque, and this term is zero for the PMSM, so it has a vital role for self-starting capability of LSPMSMs.

Since DTFC method can provide an accurate and fast decoupled control of the stator flux linkage and the electromagnetic torque without current regulators [1], it has been employed extensively in the past three decades [1, 11-14]. In this section, this well-known technique is briefly discussed, and the reader is referred to [1] for more details. Because the goal of this work is to compare and test the effects of the DTFC scheme on LSPMSMs and PMSMs performance, we intentionally have employed a simple classical Switching-Table based Direct Torque Flux Control (ST-DTFC) , and any of the known improved methods did not have been employed hereby. For this purpose, a block diagram of the ST-DTFC scheme, applicable for PMSM and LSPMSM, is shown in Fig. 4. 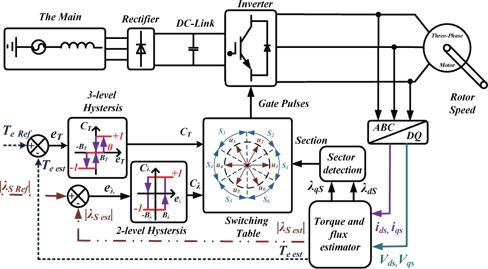 Fig. 4.A block diagram of ST-DTFC for three-phase PMSM and LSPMSM drive.

Eq. (13) is used for estimating stator flux linkage of both motors, and the value of the initial stator flux vector depends on the magnetizing flux of PM material.

where and denote the stator voltage and current space vectors, respectively.

In this section, simulation results of a 1-KW, four-pole, 50 Hz, and 380 Volt three-phase PMSM and the equal LSPMSM of VSI-fed ST-DTFC method under the same conditions (, i.e., the same load torque, speed references, DC link, rectifier, three-phase supply, and VSI) using identical controllers are provided. The simulation parameters are given in the appendix. However, to verify its operation, different conditions are tested. For example, different reference fluxes and torques are selected for a fan load. Stator current of phase “a” (ia Stator), electromagnetic, load and reference torques (Te, TLoad, and Te ref ), motor speed (ωm), and stator flux (φS) of both motors for STDTFC method are presented in Fig. 6 and extended in Figs. 7-8. Besides, for a better comparison, transient and steady-state parameters are listed in Table 2. 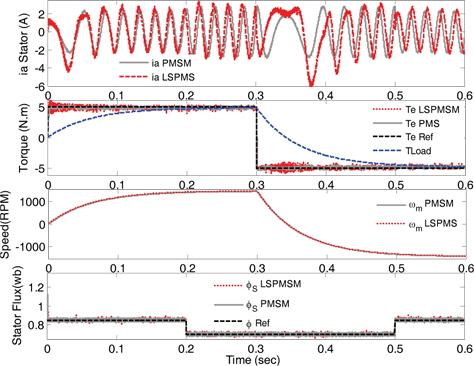 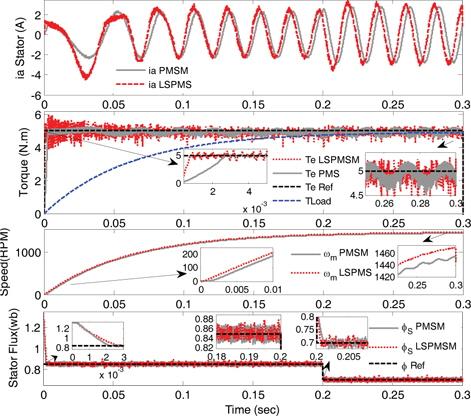 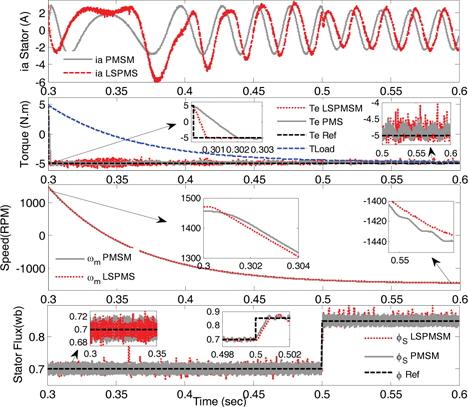 In order to present a thorough comparison for an indepth analysis, torque and flux ripples are distinguished as: maximum and average ripples. For example, maximum torque ripple (T ripple max) is defined as:

The simulation includes start-up process with a 5 (N.m.) reference torque and a 0.85 (Wb) reference stator flux. To evaluate the impact of the flux stator, at 0.2 second the reference flux is changed from 0.85 to 0.7 (Wb). Compare to the PMSM, LSPMSM has a better dynamic response. As can be observed in Fig. 7, LSPMSM tracks instantaneously reference torque. Clearly, induction torque of LSPMSM provides its line-starting capability. Similarly, this capability is conducive to provide a better dynamic response rather than the PMSM. However, torque ripple in low speed and starting current of the LSPMSM is higher than those of PMSM, due to its induction behavior.

After the motors have stabilized at the steady-state speed, at t=0.3 (s), the reference torque and consequently the generated electromagnetic torques are inverted abruptly, passing from 5 (N.m) to -5 (N.m), so the motor torque is decreased. As shown in Figs. 7 and 8, the main drawback of the LSPMSM is its high torque ripples in low speed, which may cause some problems. However, the modified methods of DTFC can easily solve these issues [1, 11]. For example, it is expected that using Space Vector Modulation (SVM) technique, torque ripple reduces significantly rather than classical one, due to its lower harmonic current. Moreover, this high ripples can also be reduced by multilevel converters since more and different voltage vectors are available to control flux and torque [11].

Finally, to evaluate different conditions, the reference flux torque is changed from 0.7 to 0.85 (Wb). Again, Fig. 8 confirms the proposed superiority of the LSPMSM against the PMSM, due to the lower flux and torque ripples and better dynamic responses. Nevertheless, the stator currents of the LSPMSM have a higher Total Harmonic Distortion (THD) than that of the PMSM, and it has a repercussion on the motor efficiency in the steady-state.

Torque components of both motors and load torque (TLoad) are shown in Fig. 9. Compared to the PMSM, excitation and reluctance torque ripples of the LSPMSM are significantly higher than those of PMSM. Nevertheless, interaction of induction torque between the other torque components of LSPMSM reduces the average torque ripple of LSPMSM, since the rotor windings of LSPMSM operate as damper ones. In addition, Texc and Trel of the LSPMSM in the transient state are higher than those of PMSM, due to the adverse effect of induction torque. 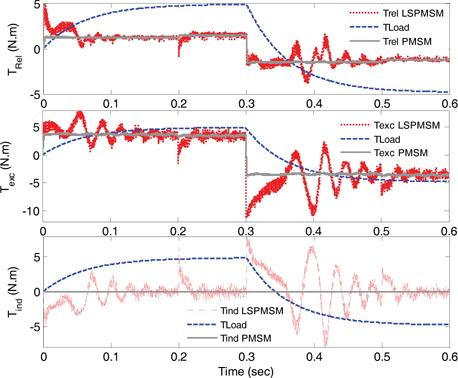 In this paper, a simple and well-known classical DTFC based on switching table was designed for LSPMSM, and it was compared with the same PMSM. The high performance of the ST-DTFC method indicates the possibility for the replacement of IMs and PMSMs with LSPMSMs in the ASD applications, and LSPMSM performance would be more improved if various known methods such as Field Oriented Control, intelligent, and nonlinear controllers were applied. For this purpose, further research might investigate LSPMSM performance under ASD techniques by an experimental method.