In this paper, characteristics of blushless direct current (BLDC) motor including core loss are analyzed considering pulse width modulation (PWM) of inverter. Input voltage of BLDC motor due to PWM is calculated considering duty ratio and carrier frequency of inverter in order to control torque or speed of BLDC motor. For the calculation of core loss, the input current with harmonics due to PWM voltage is calculated by using equivalent circuit model of BLDC motor according to switching pattern and carrier frequency. Next, core loss is analyzed by inputting the currents as a source of BLDC motor for FEM. Characteristics including core loss are compared with ones without PWM waveform according to reference speed.

Nowadays, it is important to analyze the losses such as core loss, copper loss and stray load loss in order to assess exact efficiency on the design stage of the motor. These losses are the main sources of heat generation. For the compact design and low operating cost of the system, these should be decreased when designing motor. Especially, core loss is increased remarkably at high speed. A lot of studies on the core loss of motor have been conducted by engineers [1-4]. However, these are based on ideal input voltage or current without inverter switching. In case of inverter driven motor, input voltage to the motor has harmonics due to switch pattern of inverter for pulse width modulation (PWM). The voltage with PWM waveform makes the current with harmonics. Therefore, core loss as well as copper loss is remarkably increased due to magnetic flux fluctuation in the core by current harmonics [5, 7]. Therefore, the analysis methodology for core loss considering PWM switching pattern of inverter is necessary in order for the exact assessment of system efficiency. K. Yamazaki researched analysis method for eddy current loss in the permanent magnets of motor by inputting ideal PWM waveform to FEM model [8]. However, it is difficult to consider the PWM voltage waveform due to control algorithm and carrier frequency.

The speed of blushless DC (BLDC) motor is generally controlled by PWM by changing duty ratio of switch at certain carrier frequency. In case of inverter driven motor such as BLDC, its efficiency is vary depending on carrier frequency, duty ratio, reactance of motor, etc. Therefore, loss analysis considering inverter parameters is necessary.

In this paper, inverter model including duty ratio control strategy is introduced in order to make PWM voltage waveform and BLDC motor model with equivalent circuit is used for the calculation of current waveform with harmonics from the PWM voltage waveform. Next, the characteristics of BLDC motor are analyzed by using FEM in which current waveform is a source of magneto-motive force. And then the core loss by proposed method is compared with that by ideal current waveform without PWM switching strategy. Finally the core loss is also compared with experimental one.

The application of the inverter driven BLDC motor introduced in the paper is for electric compressor. Fig. 1 shows the analysis model of BLDC motor. It has 6 poles and 9 slots combination. For the compact design, it is wound with concentrated winding. The material of permanent magnet is ferrite. The inverter makes controllable voltage for speed reference by using duty ratio parameter. Table 1 shows the brief specification of BLDC motor and inverter for the analysis.

Table 1.Specification of the BLDC motor and inverter

For the exact loss analysis, the co-simulation model for inverter driven BLDC motor including PWM switching algorithm based on ANSYS Simplorer software is introduced as shown in Fig. 2. The co-simulation model has inverter with 6 MOSFET switches which can be turn on and off by PWM sub-controller and BLDC motor model with equivalent circuit. Each of switching devices has 120° electric conduction region in which PWM with duty ratio is applied. For the simplicity of analysis, dead time of them against arm short is not considered in the model. 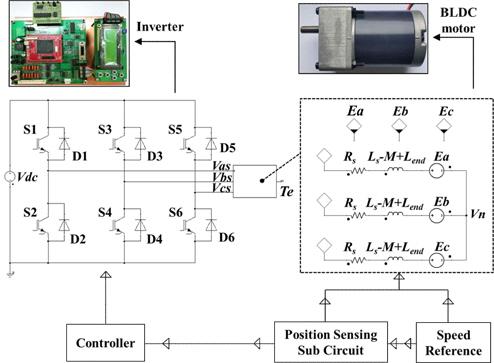 where va , vb , vc are phase voltages; Rs is winding resistance; ia , ib , ic are phase currents of each stator winding; Ea , Eb , Ec are phase back EMFs; Ls is selfinductance; M is mutual-inductance; Lend is leakageinductance of end winding.

In the simulation model in Fig. 2, the back EMF Ea , Eb , Ec generated by 2D FEM of BLDC motor is directly used as lookup table. Because equivalent circuit parameters are derived from 2D FEM, the leakage inductance of end winding should be included in the model.

For the calculation of output torque, Te for the feedback control, output power, Pe is divided by angular velocity of rotor, ωm as shown in (2) and (3). 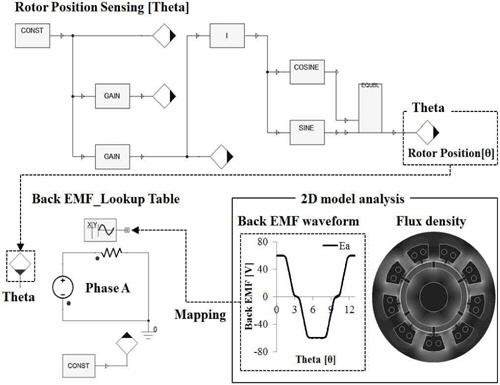 For the exact loss assessment, inverter model considering PWM voltage waveform should be adopted in the cosimulation model. In the paper, in order to make control voltage from battery voltage, duty ratio technique is used. As shown in Fig. 4, On and Off states of switch control signal are determined through the comparison between saw tooth voltage, vst with a certain carrier frequency and control voltage, vcontrol . When the control voltage is greater than the saw tooth voltage, the switch is ‘Turn On’. Inverse case, it is ‘Turn Off’. 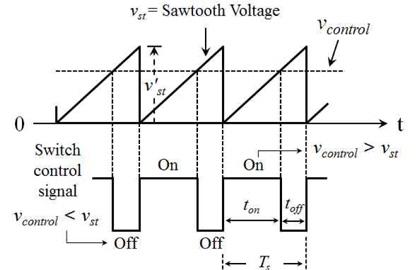 The interval time of ‘Turn On’ and ‘Turn Off’ could be changed by the ratio of the amplitude of the saw tooth voltage, v′st and control voltage, vcontrol . Ts is sum of the switch On and Off time. The switching frequency is also represented by the reciprocal of the cycle in (4). The switching duty ratio, D is the ratio of turn on time, ton and Ts in (5)

Conditional block of state equation for determining the switching operation as shown in Fig. 6 is represented by 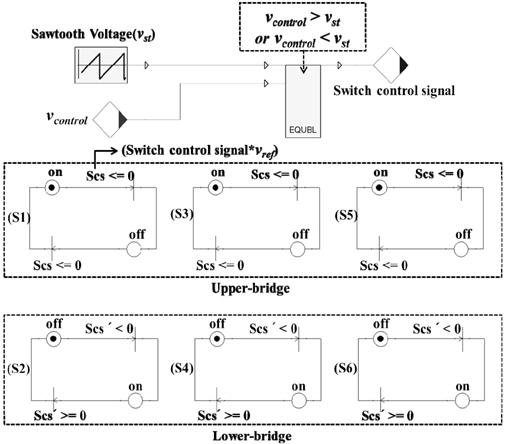 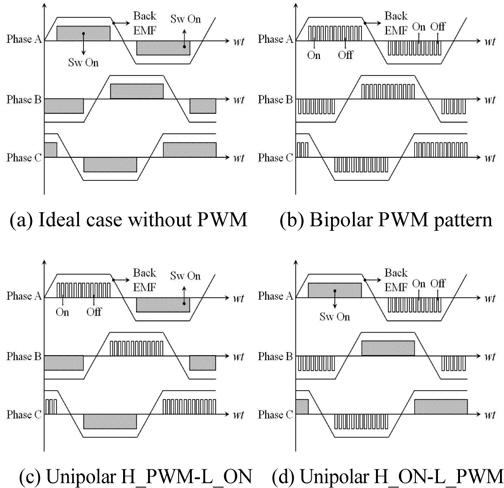 Fig. 5.Switching patterns of PWM in the inverter

Fig. 6 shows control sub-circuit for PWM voltage waveforms based on duty ratio in the co-simulation model. The state of 6 MOSFET switch control signal can be decided through comparison between saw tooth voltage, vst and control voltage, vcontrol due to duty ratio. Reference voltage, vref has a 120° flatted waveform with amplitude of 1 as shown in Fig. 5 (a). Multiplying these two parameters of the switch control signal and reference voltage, vref, the final PWM output signal can be generated.

3.3 The comparison of current and voltage waveforms between simulation and experiment

Through the co-simulation model for inverter driven BLDC motor in Fig. 2, the current and voltage waveforms can be extracted in Figs. 7 (a) and (c). The simulation results are similar to experiment results with proto-type having same carrier frequency and PWM duty ratio. 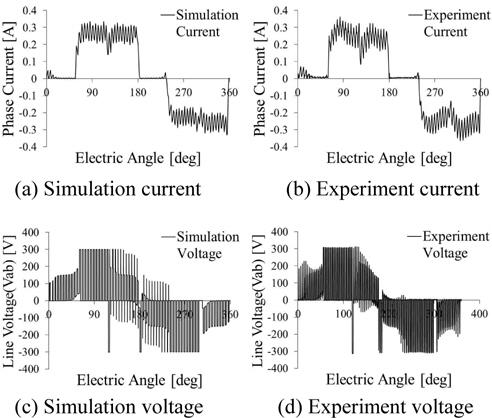 Fig. 7.Current and voltage waveforms between the simulation and the experiment

4.1 Comparison according to switching patterns

Figs. 8 and Fig. 9 show analysis results by inputting current waveforms generated from co-simulation model to 2D FEM as a current source. The analysis results in Fig. 8 are derived from ideal switch pattern of inverter without PWM control. On the other hand, the results in Fig. 9 show the waveforms with harmonics because of unipolar H_PWM-L_ON switch pattern. 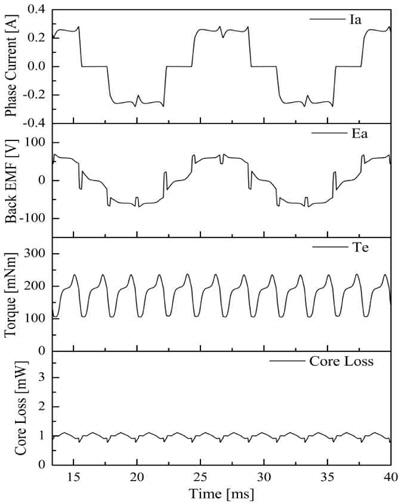 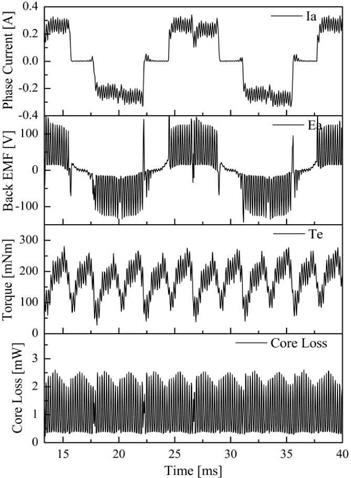 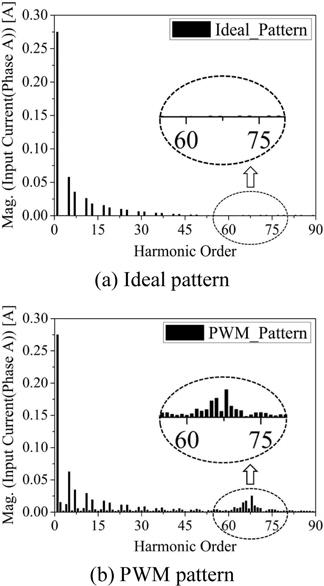 Fig. 10.Harmonics of phase current according to switching patterns (@1,500rpm)

The harmonics on PWM voltage waveform by duty ratio control based on carrier frequency generate current ripple and affects the ripple of back EMF waveform. The torque of BLDC motor is occurred by multiplying the current and the back EMF. Therefore, the torque ripple is increased due to harmonics. In addition, the core loss between ideal and PWM switching patterns show distinct difference in the waveform. The core loss density by current harmonics is increased remarkably.

For the analysis of coreloss including harmonic effect, ANSYS Maxwell software is used by inputting several magnetic flux density vs. coreloss curves according to frequencies from 30 Hz to 2,000 Hz as shown in Fig. 11. 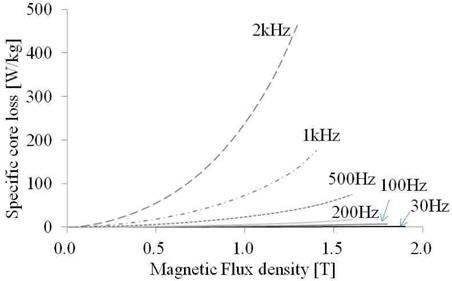 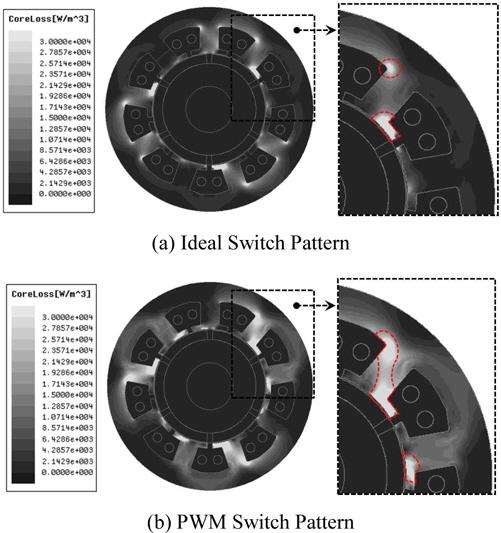 4.2 Comparison according to motor speed without changing carrier frequency 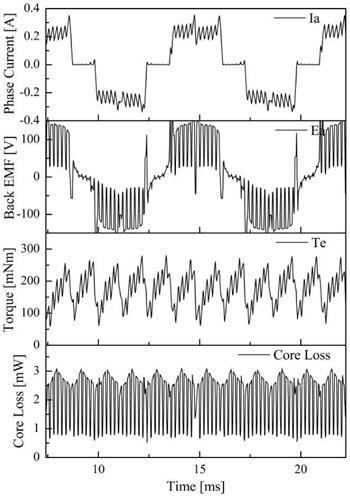 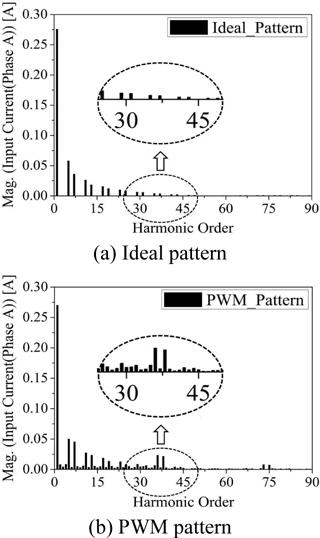 Fig. 14.Harmonics of phase current according to switching patterns (@2,700rpm) 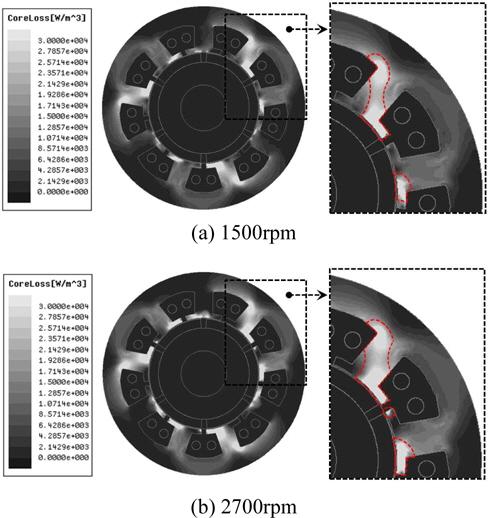 Analysis results of total harmonic distortion (THD) on phase current according to PWM switching patterns are shown in Table 2. Although fundamental component of phase current is about 0.27A regardless of switch patterns, THD is different because of the harmonics by carrier frequency for PWM control. Finally, analysis results of inverter driven BLDC motor is showed in Table 3.

Because THD of current waveform by PWM is 7% larger than that of ideal switch pattern at 1,500rpm, the torque ripple of the analysis model with PWM control considering carrier frequency increases about 70%. Both iron loss and copper loss also increase about 119mW and 12.7mW respectively. For this reason, the efficiency is approximately decreased about 0.5%.

For the validity of the simulation results, coreloss is measured on the dynamometer by subtracting mechanical loss and copper loss out of total loss which can be derived from input power and output power of BLDC motor. Coreloss is measured as 1,080 mW at 1,500 rpm and 2,020 mW at 2,700 rpm respectively.

The analysis method for the characteristics of inverter driven BLDC motor is proposed by using co-simulation model of inverter and motor in the paper. In general, ideal switch pattern of inverter is used at design stage of BLDC motor. However, it is difficult to assess core loss as well as copper loss due to harmonics of voltage and current. Especially characteristics of motor are affected by inverter parameters such as carrier frequency, duty ratio and frequency of voltage, etc. By using the proposed method, increase on core loss of inverter driven BLDC motor can be assessed qualitively rather than exact quantitive core loss and effective motor design can be realized considering these inverter parameters.