Wind has been a rapidly growing renewable power source for the last twenty years. Since wind behavior is chaotic in nature, its forecasting is not easy. At the same time, developing an accurate forecasting method is essential when wind farms are integrated into the power grid. In fact, wind speed forecasting tools can solve issues related to grid stability and reserve allocation. In this paper 30 hours ahead wind speed profile forecast is proposed using Adaptive Wavelet Neural Network (AWNN). The implemented AWNN uses a Mexican hat mother Wavelet, and Morlet Mother Wavelet for seven, eight and nine levels decompositions. For wind speed forecasting, the time series data on wind speed has been gathered from the National Renewable Energy Laboratory (NREL) website. In this work, hourly averaged 10-min wind speed data sets for the year 2004 in the Midwest ISO region (site number 7263) is taken for analysis. Data sets are normalized in the range of [-1, 1] to improve the training performance of forecasting models. Total 8760 samples were taken for this forecasting analysis. After the forecasting phase, statistical parameters are calculated to evaluate system accuracy, comparing different configurations.

In this paper an Adaptive Wavelet Neural Network (AWNN) wind speed forecasting study has been conducted. Both Mexican hat and Morlet wavelets have been used as mother wavelets and analyses with 7, 8, 9 levels decompositions of wind speed series have been done in the forecasting studies. In each case decomposed signals are forecasted for 30 hours ahead and later all these signals are added to get forecasted wind speed. All these forecasting results are compared among themselves based on statistical parameters and their respective individual forecasting results are tabulated and commented in section III. Among these methods Morlet eight levels, nine level decompositions have shown best performances. AWNN Multi level decomposition for different wavelets are first time used in this paper.

A wavelet is a tiny wave which can increase and decrease its amplitude and width in a fixed time period. Wavelet properties make them more suitable for many problems. In wavelets translation, dilation parameters (generally represented as a, b) reflect length and breadth of a wavelet. These parameters can be adjusted according to the problem type, and varied accordingly. They are easily adaptable, flexible and easily fit into any complex problems. Compared to neural networks wavelets training is accurate since wavelets consist of translation, dilation parameters. Wavelet analysis is advantageous when compared to Fourier series analysis. In Fourier analysis every signal can be expressed either in sine or cosine waveforms, where as in wavelet analysis a suitable wavelet can be chosen from a family of wavelets. Fourier analysis is suitable to analyze either frequency or time but not both at the same time, where as in wavelet analysis this operation is possible. In other words wavelets can be better adoptable to time varying frequency analysis. Wavelet, as shown below, satisfies two fundamental properties by which it can be said that wavelets are also like ordinary waves [12, 15]:

Several types of wavelets exist in literature. Depending on the type of the problem, a suitable wavelet can be chosen. Here in this paper Mexican hat wavelet and Morlet wavelets have been chosen for wind speed forecasting. One complete year (2004) of Wind speed data has been collected from National Renewable Energy Laboratory (NREL) website [13]. This paper is based on Adaptive Wavelet Neural Networks, where the term “Adaptive” means they can be suitable or adjustable to new conditions. In the present problem hidden layer consists of wavelet function where wavelet function output value is based on network weights as well as translation a and dilation b parameters.

These translation and dilation parameters are also updated at every iteration like network weights so that network convergence is faster and forecasting result is more accurate. Another thing which can differentiate the present paper with remaining literature is an additional direct connection between input and output layer which leads to better input-output relation there by forecast accuracy improves. The above mentioned hidden layer and additional direct input-output relation not only improves forecast accuracy but also distinguishes this network structure with previous networks existing in literature. In wavelets Multi Resolution Analysis (MRA) technique has been used to decompose wind signal to find approximated and detailed coefficients. Decomposition makes signal clearer to visualize and noise can be then easily eliminated to improve prediction accuracy. Generally approximated coefficients are used to analyze low frequency signals and detailed coefficients are used to analyze high frequency signals. Finally these two coefficients combination is used to analyze signal at all levels so that signal can be analyzed accurately. Each of these coefficients are forecasted for next thirty hours ahead and all these forecasted signals are re-combined to get original signal by using Wavelet Methods for Time series Analysis (WMTSA).

Thus in this paper WMTSA (Wavelet methods for Time series Analysis) has been used. This is a wavelet tool kit designed in MATLAB to analyze time series data. Wavelet methods can be easily implemented by using this toolkit. MATLAB code is implemented for mentioned algorithm using MATLAB R2009a version to evaluate wind speed forecasting. Here a back propagation algorithm is used to train the network. Wavelet networks are the combination of wavelet decomposition and neural networks, and they posses neural network characteristics too. Wavelet neural network is similar to back propagation network except that input layer is connected to hidden layer as well as output layer. Here an AWNN method is used for wind speed forecasting [12, 15].

Fig. 1 shows [12] wavelet neural network where u1, u2 … u50 show input wind velocities, z1, z2, z3 are hidden nodes, v1, v2, … v50 represent weights connected between input to output and w1, w2 … … wm are weights of connection between hidden and output node, where m denotes number of weights and here m=3. In Wavelet neural network, hidden layer consists of wavelet function. In this section Mexican hat has been used as a mother wavelet and is shown in Fig. 2 [15]. It is obtained after derivation Gaussian function twice, where Gaussian function is defined as: 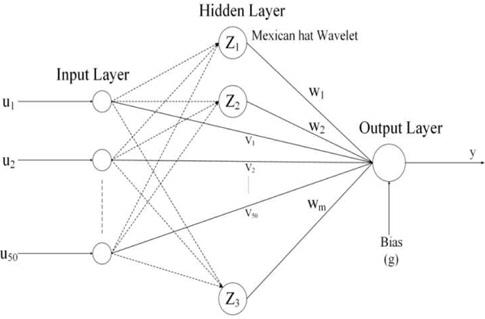 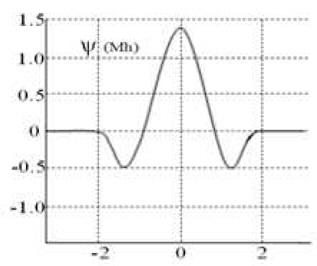 This function has some special properties like symmetry in shape, explicit in expression, providing exact time frequency analysis. All these properties make Mexican hat more suitable for forecasting applications. Here input patterns have been set as u = [u1, u2, … … … … . un]T. Where n denotes dimension, that is number of wind samples n=50, and ‘u’ is a pattern; similarly p such patterns are used to train the network. In each pattern the elements are lag hours of different decomposed signals. The wavelet family generates the entire input space using translating and dilating the mother wavelet as:

The input data in the input layer is directly transferred to the wavelet layer. Finally, the n-dimensional wavelet basis function is calculated based on tensor product of all one-dimensional wavelets, so output Zj of hidden layer neurons is given by

To map the linear input-output relation, it is tradition to have additional direct connections from input to output layer, since wavelets are not used for reconstructing linear terms. The representation of the Wavelet Neural Network (WNN), for hour-ahead forecast of the decomposed signal is calculated as:

Where wj indicates the weight between the jth wavelon and output node, vi represents the weight between the ith input node and output node, and g is the bias at output node. Standard back propagation algorithm with gradient descent technique is then used to train the wavelet neural network and output function is computed by the Wavelet Neural network (WNN), which is differentiable with respect to unknown parameters like translation, dilation parameters, weights and bias of the network. The main goal of training is minimization of cost function which is also known as mean square error (E). Where E can be represented as:

Where y( p) is the calculated (forecasted) output and y(d) ( p) is the actual output required for a given pth input pattern. A free parameter update is given as:

where Γ is a unknown free variable, η and α are learning rate and momentum parameters. The change in free parameters using (7) can be found as:

Testing: 5. Once the problem converges, then that weights, translation a, dilation b parameters have been used to test wind speed data. 6. Forecasting (testing) has been done for 30 hours ahead from 2551 to 2580 wind sample and corresponding wind input samples are from 2501 to 2550, in each instant forecasted output has taken input for the next pattern. This recursive procedure repeated for next 30 samples. 7. This procedure is applicable to D1 to Dn and Sn. 8. Finally all these coefficients are added to get forecasted wind speed. 9. Decomposition of wind speed signal at different levels is shown below from Figs. 3-5. These individual decomposed signals are helpful to analyze the complete wind speed series. All these decomposed signals are forecasted individually and later added to get forecasted wind speed. 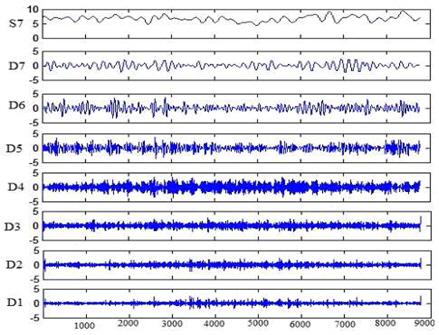 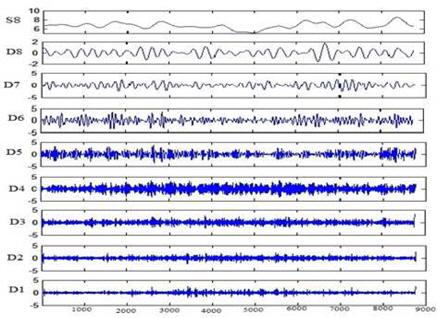 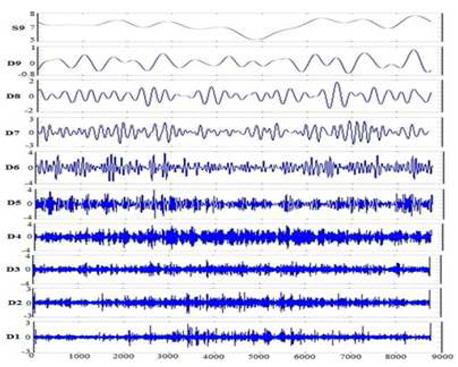 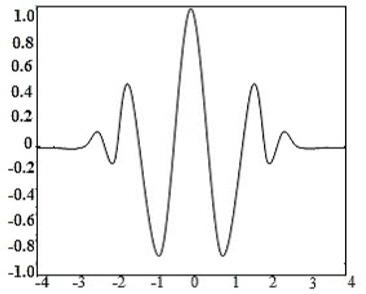 In this part of work Morlet mother wavelet is used. The following equations can explain forecasting processor by using AWNN.

Morlet mother wavelet is defined as:

The translation and dilation version of Morlet wavelet is as follows:

As we already discussed in equations from 5-9, we repeat the same procedure as in Morlet wavelet and finally Δaij , Δbij is given by

Decomposition of wind signal at different levels has been shown in the following figures from 7-9. Similar algorithm is used to forecast the wind signal using again Morlet wavelet in the above mentioned Mexican hat wavelet neural network. 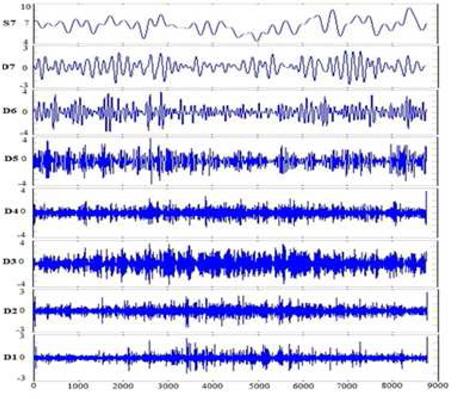 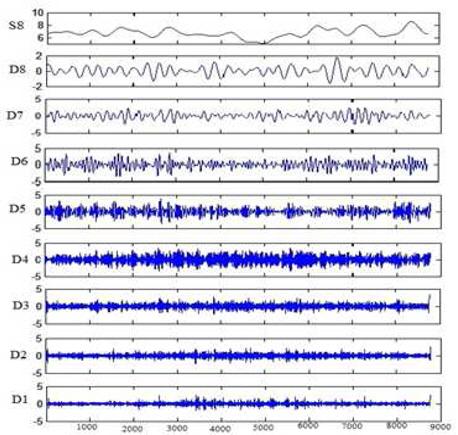 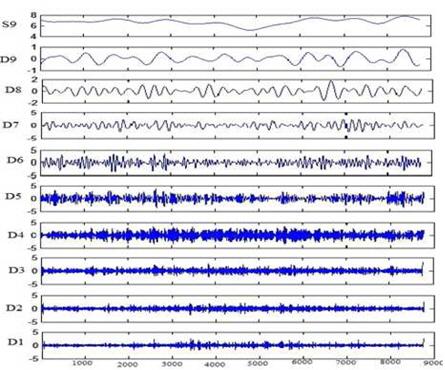 In this section wind speed forecasting results using AWNN are analyzed and discussed. In Adaptive Wavelet Neural Network (AWNN), Mexican hat mother wavelet and Morlet mother wavelet have been used. Both these wavelets are used to forecast at seven, eight and nine levels of decomposition. Tables 1 to 4 have shown comparison of actual and forecasted wind speed for 2 different wavelets at various levels of decomposition. Table 7 shows comparison among all forecasting methods based on their respective statistical measures. Among all these results Morlet wavelet 8-level, 9-levels decomposition are giving the best results. Morlet wavelet 8-level decomposition shows a better accuracy when APE, MAPE, MAE are considered and 9-level decomposition is relatively better when RMSE, Correlation coefficient (R) are considered. Figs. 10 to 15 have shown graphical representation between actual and forecasted wind speed. This comparison has been done for 30 hours ahead wind speed prediction. 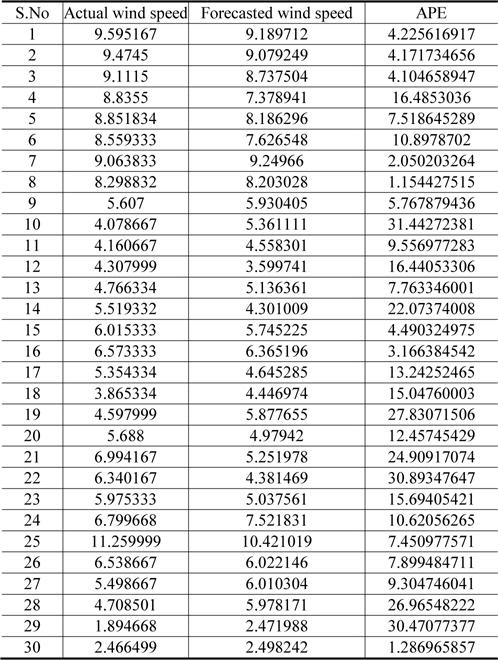 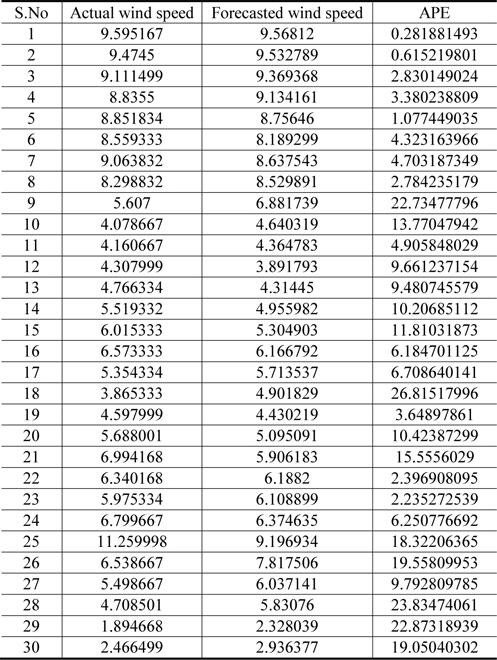 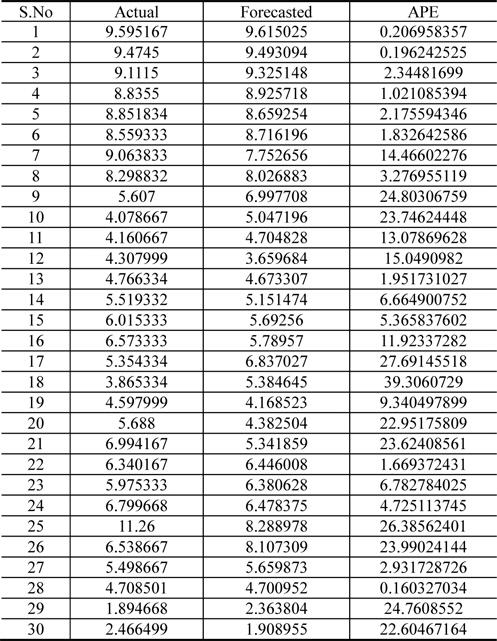 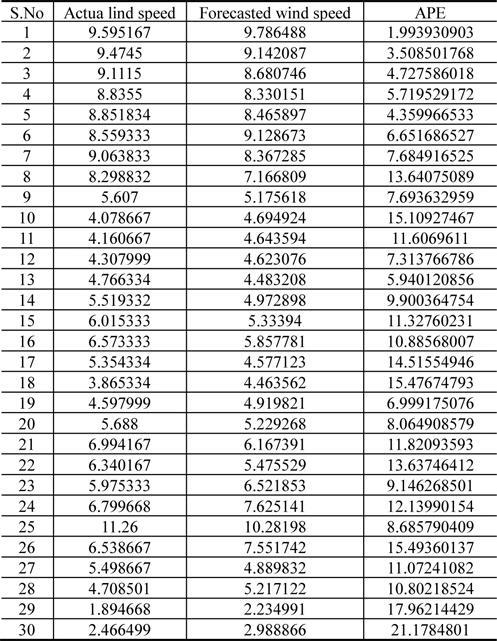 Table 7.Comparison of statistical measures for different wavelets at various levels of decomposition 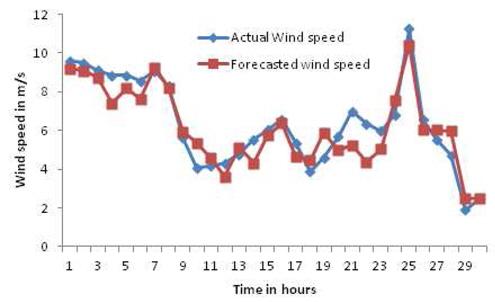 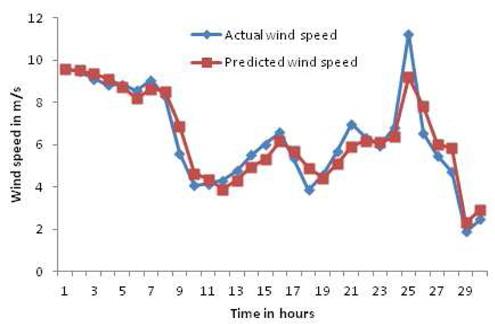 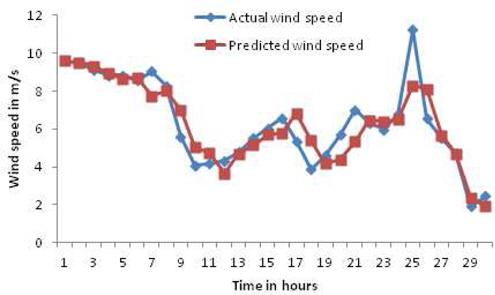 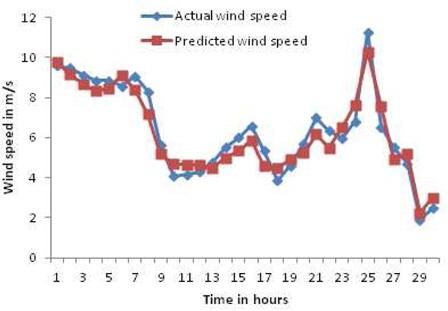 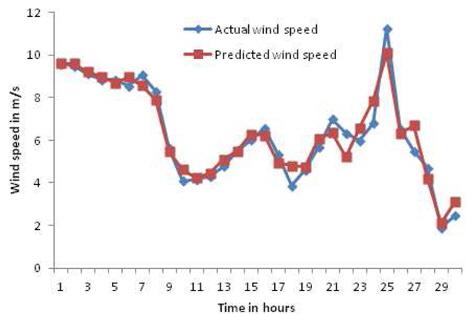 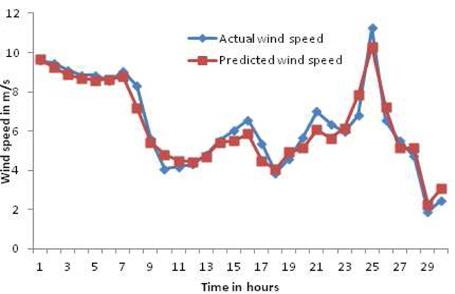 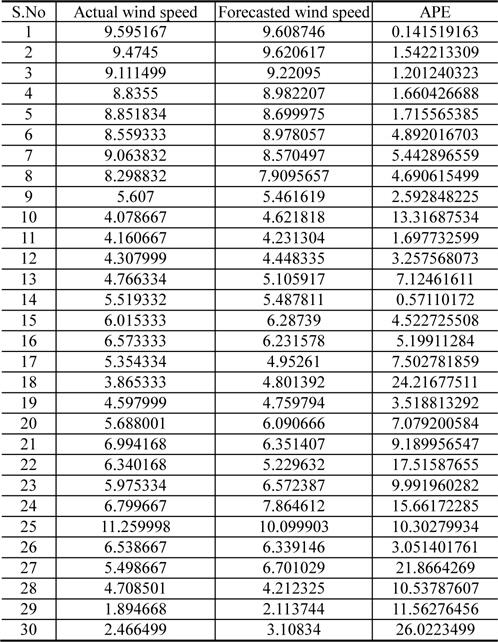 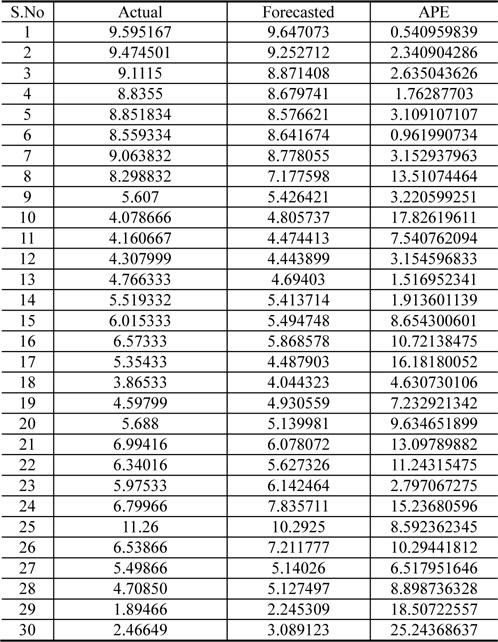 Average computation time to converge (from D1 to Dn and Sn) is varying from 4 seconds to 60 seconds and it also depends on wavelet type and decomposition level.