Cross-talk between Wnt/β-catenin and Hippo signaling pathways: a brief review

Understanding the mechanisms for controlling the size of animals and their organs has been a challenging issue in biology, and the molecular mechanisms remain poorly understood (1-3). It is obvious that cell growth, proliferation, differentiation, and death should be tightly controlled to attain organs of the proper size during development, and that tissue homeostasis should be maintained in adults. Relatively recent studies suggested that the Hippo signaling pathway is a key mechanism for the control of organ size (1-5). The upstream regulators and the list of genes regulated by the Hippo pathway suggest that it negatively regulates cell proliferation (5). Uncontrolled cell proliferation due to dysregulation of Hippo signaling is responsible for tumor formation (1, 4, 6). Therefore, Hippo signaling is under intense scrutiny because of its significant roles in both developmental and cancer biology.

Wnt signaling plays critical roles during embryonic development as well as in homeostatic mechanisms in adult tissues (7, 8). Complexity inferred by the temporal and spatial expression of 19 different Wnts and 10 types of Frizzled receptors, in mice and human, enables the Wnt signaling pathway to be involved in the control of diverse biological processes such as cell proliferation, differentiation, fate determination, adipogenesis, aging, etc (18, 19). Therefore, dysregulation of Wnt signaling can lead to diverse human diseases including cancers, osteoporosis, and neurodegeneration.

Wnt signaling can be divided into canonical (β-catenin dependent) and non-canonical (β-catenin independent) pathways based on whether increase of and nuclear localization of β-catenin occur in the presence of Wnt ligands (19, 20). Combinations of certain types of Wnt and Wnt receptors leads to the stabilization of β-catenin, while other combinations transduce signals via small G-proteins such as Rho/Rac or through regulation of the intracellular calcium level. Since most of the known cross-talk occurring between Hippo and Wnt signaling, the main theme of this review, are restricted to Wnt/β-catenin signaling, the canonical Wnt signaling pathway will be described in the present review. Outstanding reviews on non-canonical Wnt signaling are available elsewhere (21-23).

Wnts are highly conserved secreted proteins with glycosylation and lipid-modification, and act as ligands (24, 25). β-catenin is a transcriptional co-activator, and regulation of the level of and nuclear localization of β-catenin is a pivotal regulatory step in the Wnt/β-catenin signaling pathway. In the absence of Wnt, cytoplasmic β-catenin is consistently phosphorylated by GSK3β (glycogen synthase kinase 3β) in a destruction complex containing Axin and APC (adenomatous polyposis coli) (Fig. 1). The phosphorylated β-catenin is then ubiquitinated by the E3 ligase β-TrCP (β-transducin repeat-containing protein), and subsequently degraded in a proteasome-dependent manner to result in low cytoplasmic levels of β-catenin. The expression of genes regulated by Wnt/β-catenin signaling is thereby repressed due to the low levels of the transcriptional co-activator, β-catenin (Fig. 1A). However, in the presence of Wnt, binding of Wnt to its receptor Fz (Frizzled) and co-receptor LRP5/6 leads to phosphorylation of the intracellular region of LRP5/6 by GSK3β and CK1γ. Axin interacts with the phosphorylated LRP5/6 resulting in elevation in the levels of cytoplasmic β-catenin in a Dvl (Dishevelled)-dependent manner, though it is still controversial whether Axin translocates to the phosphorylated LRP5/6 apart from the components of the β-catenin destruction complex or as a whole complex (26, 27). The accumulated cytoplasmic β-catenin then enters into the nucleus and interacts with TCF (T-cell factor)/LEF (lymphoid enhancer factor) to activate the expression of Wnt target genes, which control cell proliferation (for example, c-myc and cyclin D1) and developmental processes (for example, twin, brachyuryetc.). Due to space limitations the basic frame of signal transduction of the Wnt/β-catenin pathway was explained only briefly; however, much more elaborated regulatory mechanisms can be found in recent reviews, including ours (7, 8, 19). 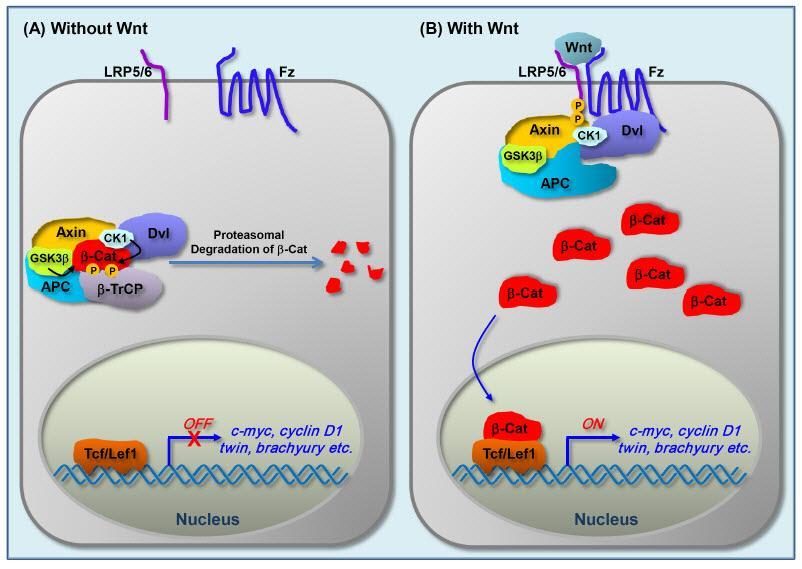 Fig. 1.Wnt/β-catenin signaling pathway. Schematic diagram for the core components and signal transduction of Wnt/β-catenin pathway. (A) In the absence of Wnt, GSK3β and CK1 phosphorylate β-catenin degradation complex which includes APC and Axin. The phosphorylated β-catenin is recognized by β-TrCP and subsequently degraded by proteasomal pathway. As a result, TCF/LEF1 suppresses the expression of target genes. (B) In the presence of Wnt, binding of Wnt to Fz and its co-receptor LRP5/6 leads to phosphorylation of LRP6. Axin, itself alone or whole β-catenin degradation complex including Axin, translocates to the phosphorylated LRP5/6, which leads to stabilization of cytoplasmic β-catenin. The stabilized β-catenin translocates into the nucleus and interacts with TCF/LEF1, which in turn enhances the expression of target genes.

The core kinase cascade for the inactivation of YAP/TAZ

Hippo signaling is composed of a highly conserved kinase cascade module that relays signals in a similar fashion in both mammals and Drosophila (1, 4). Mutations of the genes composing the core kinase complex, which were discovered in genetic screens in Drosophila for tumor suppressor genes, lead to a phenotype similar to hippopotamus in Drosophila due to increased cell proliferation and diminished cell death. As such, this signaling was named the Hippo pathway. The identified genes encode the following serine/threonine protein kinases and scaffolding proteins: (1) Hippo (MST1 and MST2 in mammals), which interacts with Salvador (SAV1 or also known as WW45 in mammals); and (2) Warts (LATS1 and LATS2 in mammals), which interacts with Mats (MOB1A and MOB1B in mammals) (1, 5). The transcriptional co-activator Yorkie (YAP and TAZ in mammals) forms a complex with the transcription factor Scalloped (TEAD 1-4 in mammals) to finally control the expression of genes regulated by the Hippo signaling pathway (Fig. 2). 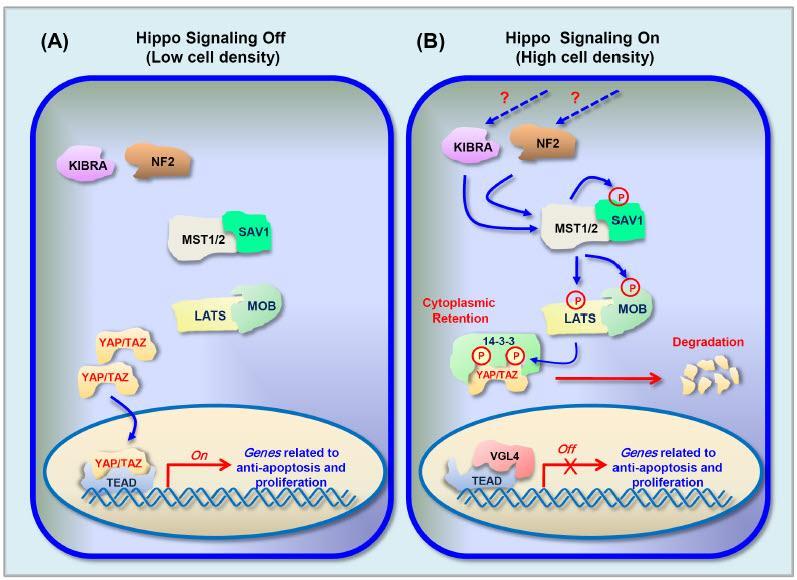 Fig. 2.Hippo signaling pathway. Schematic diagram for the core components and signal transduction of Hippo pathway. (A) When Hippo signaling is Off (in low cell density): The kinases MST1/2 and LATS are inactive, which results in inhibition of phosphorylation of YAP and TAZ. The stabilized YAP/TAZ in nuclei interacts with TEAD and enhances the transcription of target genes related to anti-apoptosis and proliferation. (B) When Hippo signaling is On (in high cell density): Activation of KIBRA and NF2 via unknown upstream signaling leads to activation of MST1/2. Activated MST1/2 phosphorylate SAV1 which in turn phosphorylate LATS and MOB1. The activated LATS/MOB phosphorylates YAP/TAZ which results in cytoplasmic retention by 14-3-3 protein and proteasomal degradation of YAP/TAZ. As a result, TEAD interacts with VGL4 and suppresses the expression of target genes.

Hippo signaling is regulated in a cell-density-dependent manner. When the MST1/2 and LATS1/2 kinases are activated at high cell density, Hippo signaling is considered to be in the active state. Although the biochemical mechanism is not yet known, MST1/2 are phosphorylated and activated in response to upstream signals (30, 34). The activated MST1/2, in complex with SAV1, activates LATS1/2 and MOB1 by phosphorylation, which in turn phosphorylate the major targets of the Hippo pathway: YAP,at Ser127, and TAZ, at Ser89 (34). The phosphorylated YAP and TAZ are then translocated to the cytoplasm. As a result, the expression of genes mediated by YAP/TAZ and TEAD ceases, and the YAP/TAZ is sequestered by 14-3-3 protein and degraded via the ubiquitin/proteosomal pathway (34, 35).

It has also been shown that the PPxY motifs of Ex (Expanded), Wart, and Hippo directly bind to the WW domain of Yorkie, sequestrating Yorkie to the cytoplasm in a Warts-mediated phosphorylation- independent manner, to inhibit Yorkie activity in Drosophila (36, 37); however, the PPxP motifs of Ex and Hippo necessary for the interaction with Yorkie are not present in mammalian homologs. Thus, a similar phosphorylation-independent mechanism may not be present in the mammalian Hippo pathway.

At low cell density, unphosphorylated YAP/TAZ localizes to the nucleus where they interact with the TEAD group of DNA-binding transcription factors, generally inducing genes involved in anti-apoptosis (such as cell death inhibitor diap1 (38) and the microRNA bantam (39, 40) and pro-proliferation (such as cyclin E (41), E2F1 (42), and dMyc (43)). It should be noted, however, that YAP can function in a cell-context dependent manner. In some cells, the nuclear accumulation of YAP causes apoptosis via the p73-dependent transcription of pro-apoptotic genes.

The Hippo kinase cascade seems to be controlled by a myriad of upstream signals. Recent studies have shown the apical membrane of epithelial cells as well as junctions at the apical membrane to control the activity of Hippo signaling (3). In both Drosophila and mammalian polarized epithelial cells, adherens junctions separate the apical from the basolateral cell surfaces. Most upstream regulators of Hippo signaling are localized at the apical or subapical membranes as protein complexes. Crumbs, a homophilic cell-cell adhesion molecule at the apical membrane, plays a critical role in the activation of the Hippo pathway via control of the apical localization of Ex. Deletion of Crumbs results in the mis-localization of Ex, which hinders activation of the Hippo pathway. At the subapical membrane, the FERM domain-containing proteins Mer (Merlin) and Ex form a complex with the WW domain-containing protein Kibra to activate Hippo signaling. Although the molecular mechanisms for the activation of Hippo signalingare not yet fully understood, it seems that the Mer-Ex-Kibra complex recruits the members of the core kinase cascade of the Hippo pathway in close proximity (44). This possibility is supported by the fact that Ex binds Hippo, Mer binds Salavdor, and Kibra binds Hippo, Salvador and Warts. Characterization of the upstream signals and molecular mechanisms involved in the activation of the core kinase cascade is one of the top priority subjects in this field. A detailed description of the upstream signals and components can be found in excellent reviews elsewhere (3, 45).

The first evidence of cross-talk between the Wnt and Hippo signaling pathway was suggested in 2010 (10). Varelas et al. showed that TAZ blocks the interaction of Ck1δ/ε to Dvl, inhibiting the Wnt3a-induced phosphorylation of Dvl2, and thereby inhibiting Wnt/β-catenin signaling. They also demonstrated ectopic expression of MST or LATS, which leads to cytoplasmic localization of TAZ, to inhibit Wnt3a-mediated reporter activity. However, whether or not endogenous Wnt/β-catenin signaling is inhibited by the activation of the Hippo signaling pathway at the endogenous level still needs to be examined. The fact that the kidneys of TAZ conditional knockout mice showed very little increase of nuclear β-catenin raised questions about the functional relevance of their model in in vivo situations (46).

Moreover, an inhibitory role of Hippo signaling in the Wnt/β-catenin signaling pathway in developing heart was suggested by heart-specific Salvador knockout mice (SAV cKO) (47). Increased heart size as well as increased cardiomyocyte proliferation and nuclear β-catenin was found in SAV cKO (47). In microarray analysis on SAV cKO, it was also discovered that the expressions of important genes in heart development or anti-apoptosis were increased, and that the expressions of these genes were dependent on β-catenin. Finally, results from ChIP and reporter assay suggested that YAP-TEAD and β-catenin-TCF/Lef act cooperatively to induce some of their target genes, sox2 and snail2, when SAV is deleted in developing heart. However, it is still unknown whether similar results would be obtained when other Hippo core components, such as MST and LATS, are conditionally deleted, and whether this inhibitory role of SAV is applicable to all tissues rather than being restricted to the heart.

Later, an additional cross-talk mechanism was suggested (48). Imajo et al. found that YAP2 strongly blocks the constitutively active form of β-catenin (β-catenin S33Y, S37A)-mediated Topflash activity. This would be unexplainable if the inhibitory mechanism of Hippo signaling on Wnt signaling were restricted to the inhibition of Dvl, as constitutively active β-catenin is independent from Dvl activation status. YAP and TAZ interact with β-catenin to block its nuclear localization, inhibiting Wnt/β-catenin signaling. The E66A mutant of YAP, which does not bind to β-catenin, showed much reduced inhibitory activity on Wnt/β-catenin signaling. YAP(S127D), which mimics the phosphorylated-form of YAP and is mainly localized in the cytoplasm, but not YAP(S127A), which mimics the unphosphorylated-form of YAP and is mainly localized in the nucleus, inhibits the nuclear localization of β-catenin. These results suggested that YAP or TAZ inhibit Wnt signaling in two ways: by blocking the activation of Dvl and/or the cytoplasmic sequestration of β-catenin (48).

Supported by : University of Seoul