Total transfer capability (TTC) is the largest quantity of electric power that can be transferred over the interconnected transmission networks in a reliable manner while meeting all of the pre- and post-contingency system conditions [1]. The relationship of the TTC and available transfer capability (ATC) is described in the North American Electric Reliability Council (NERC) definition [1].

At the present time, there are two techniques of methods for calculating the TTC, deterministic and probabilistic. The deterministic approaches mainly use the methods such as security constrained optimal power flow (SCOPF), continuation power flow (CPF), linear programming (LP) and repeated power flow (RPF), and have some difficulties in handling the uncertainties of power systems such as the possibility of faults and weather prediction [2-4]. LP is one of fast methods to search the solution for the initial TTC. In order to reduce linearization errors, load flows should be performed periodically. Probabilistic methods have considered the uncertainties of the system performance that could not be addressed in a deterministic way, and have been implemented to evaluate the TTC for various outages [5-7]. As all power system networks and the system components are exposed to nature, they are affected by the weather condition considerably, and the failure rates of transmission lines are increased due to weather conditions. Therefore, the operation of power system could be addressed in a probabilistic approach [8].

This paper presents a probabilistic method to evaluate the TTC by considering the uncertainty of weather conditions. In the TTC evaluation, unlike the previous study of the author [8], optimization method such as SQP is used to calculate the initial TTC. The weather conditions are divided into normal and adverse weather. Because the failure rate in adverse weather condition is considerably larger than that in normal weather, the contingency in power system influences TTC assessment.

In order to determine the TTC by deterministic method, the mathematical formulation for the TTC evaluation can be expressed as follows:

For calculating the TTC, the injection real and reactive power at source and sink buses are functions of the incremental factor of load and generation in outage l, λl. The objective is to maximize incremental factor of load and generation in (1). The active and reactive power balance equations can be shown in (2) and (3). Inequality constraints such as voltage magnitude of buses and thermal limits can be written in (4) and (5). Eq. (6) means the difference between the critical energy and the transient energy as transient stability constraint. The optimization method enables transfers by increasing the complex load with uniform power factor at every load in the sink areas and increasing the injected real power at the generation buses in the source area in incremental steps until limits are incurred. 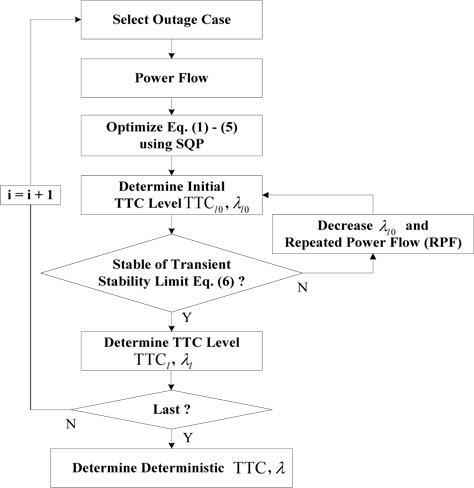 Sequential quadratic programming (SQP) is the optimization method for the minimization of the maximum of a set of smooth objective functions subject to equality and inequality constraints and simple bounds on the variables [7]. In order to get the optimal solutions the SQP generates a point satisfying these constraints by solving a strictly convex quadratic program (QP) using a positive definite estimate H of the Lagrangian. And an Armijo-type arc search or line search (monotone, nonmonotone) are used to compute the direction of descent the objective function. Generalized the SQP algorithms are implemented as follows:

The sequential Monte Carlo Simulation (MCS) is used to apply the probabilistic approach. The operating characteristic of each component in the system is represented by the two-state model described by up- and down-states, and the operating state of the whole power system can be obtained by considering the state of all components in the system and the uncertainty of weather conditions as shown in Fig. 2. The operating time in the up-state is called time to failure (TTF) and repair time in the down state is called time to repair (TTR). The TTF and the TTR can be expressed by the exponential distribution [12]. 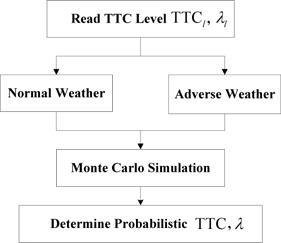 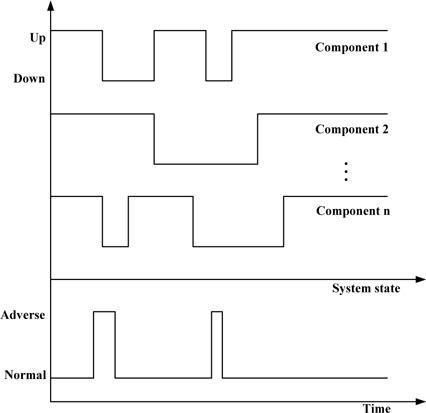 In order to show the effectiveness of the proposed algorithm, it has been tested on a 6-bus 7-line system, which is shown in Fig. 4. 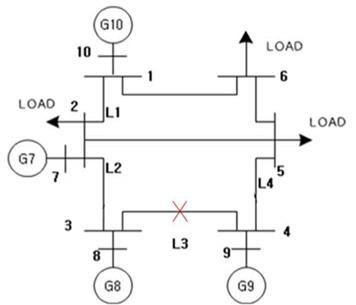 In order to show the effectiveness of the proposed method the case is tested as follows:

Table 1.TTC level with and without transient stability

Using sequential MCS, The operating state of the system in the normal condition only and the condition that include adverse weather condition for 1 year is shown in Fig. 7 and Fig. 8, respectively. The horizontal axis is the operating state of the system for 8760 hour and the vertical axis is the number of surviving components; for example, the number 5 means that two components are faulted among the six 7 components [8]. From Fig. 8, it is seen that the frequency of outage in the condition that include adverse weather is higher than for the normal weather condition. The sequential MCS can be taken to provide the probability distribution function (PDF) of TTC. Considering the normal weather condition, Fig. 9 shows the system can withstand most transient faults in the range between 130 and 140 MW in probability.

Fig. 7.System state data when 1 year is only normal weather. 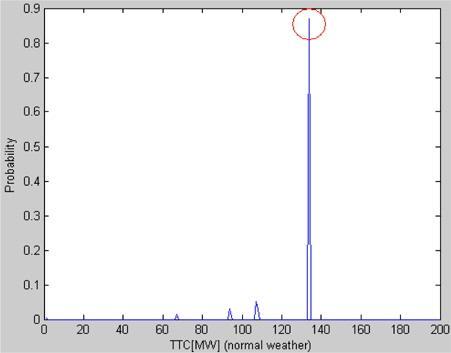 Fig. 9.PDF of TTC with the only normal weather.

Because the outages spread widely without special trend in Fig. 7, the more the TTC value in Fig. 9 moved to large value side, the higher the probability of the outages is. 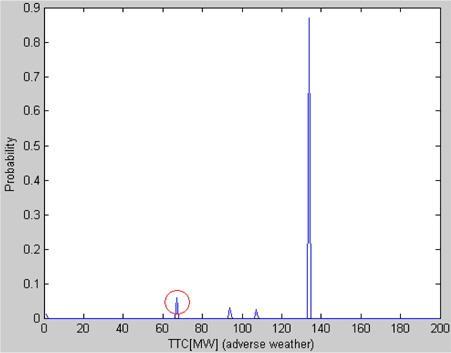 Fig. 10.PDF of TTC with including adverse weather.

If system is operating under the certain adverse weather condition, it is desirable to determine the TTC value in the range between 65 and 70 MW in probability in order to make the system stable. The reason is that the probability of TTC about 66 MW for the case with adverse weather is much higher than compared with the value in the normal weather for 1 year. Especially, it is seen that it is possible to operate power systems at lower TTC during the period such as a special weather statement, if the weather condition is considered in advance.

This paper presents a probabilistic method to evaluate the total transfer capability (TTC) by considering the energy margin and the uncertainty of weather conditions. In TTC determination the repeated power flow (RPF) method is used to maximize the incremental factor of load and generation and the transient energy margin method instead of the time simulation such as Runge-Kutta is used to check the transient stability. The weather condition that affects the system reliability is considered. As a result of considering weather effect and using probabilistic approach, the TTC for the adverse weather condition is lower than that of the normal weather condition. Especially, it is seen that it is possible to operate power systems at lower TTC during the period such as a special weather statement, if the weather condition is considered in advance.