Power Interruption Costs to Commercial Customers of Electricity in Korea

Although more investment is needed to improve the reliability of power supply, it doesn’t always bring benefits to customers in every way. Increase in the investment is accompanied by increase of the tariff and finally ends up with more burden on customers. So it is very difficult for utilities to decide how high the reliability should be set because it is not sure how much the decided reliability level would affect customers [1, 2].

There are macroscopic and microscopic methods to estimate the power interruption cost. Though the macroscopic method, in which the national GDP is divided by the entire power consumption, has its own merits in estimating the power interruption cost easily, it has some problems in evaluating the power reliability with inaccurate consideration of components such as customer type, weather, time and duration of power interruption, etc. To the contrary, in the microscopic method, customers are asked to estimate their costs or losses due to supply outages of varying duration and frequency. The strength of this method lies in the fact that the customer is probably in the best position to assess the losses. Direct costs are relatively easy to determine for some customer categories (e.g., industrial), but users’ opinions are particularly important in assessing less tangible losses, such as incon-venience, for other categories (e.g., residential). Another advantage is that the method can readily be tailored to seek particular information as related to the specific needs of the utility. Obviously, this method is beset with all the problems of questionnaire surveys, and the cost and effort of under-taking surveys is significantly higher than using other approaches outlined earlier. Nevertheless, this approach appears to be the method favored by utilities which require interruption cost data for planning purposes [4]. 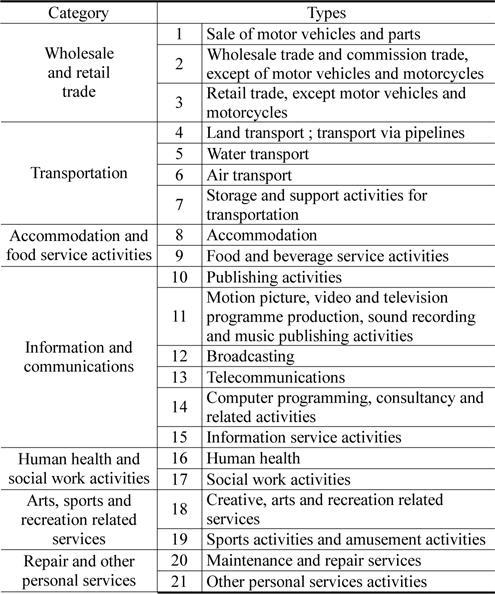 The questionnaire used in the survey was appropriately modified from that ones developed and used by the EPRI and KEPCO [5]. Table 2 shows main contents of the questionnaire. To calculate the power interruption cost for each type, commercial customers were classified in 21 types and their power consumption, power qualities, and related damages were investigated. Among survey contents, daily and hourly power consumptions were answered with percentage for customers’ convenience. Damages from the duration of power interruption excluding the worst time zone were also answered with the proportion compared to that from the worst time zone.

Power qualities were classified according to the international standard as shown in Fig. 1. 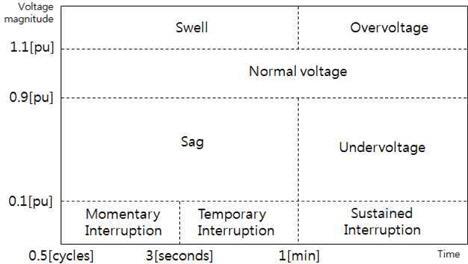 In the survey, damages of commercial customers were classified in 8 categories and the power interruption duration were classified as 1 minute, 20 minutes, 1 hour, 2 hours, 4 hours and 8 hours shown in Table 3.

2.2 Result of the survey

Fig. 2 shows how many commercial customers answered in each province in Korea. 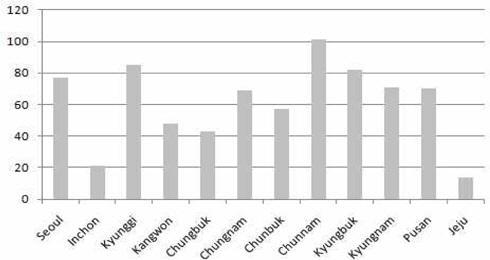 Fig. 2.Surveyed customers in each province

In Table 4, the average commercial customer has 867.3 [kW] of contract power, 65.1 employees with 190.4 of monthly work hours, and pays 13,190 thousand KRW for monthly tariff. KRW means Korean Won. Among the business type, wholesale trade and commission trade(Type 2) show the largest number of employees and biggest contract power and tariff accordingly. 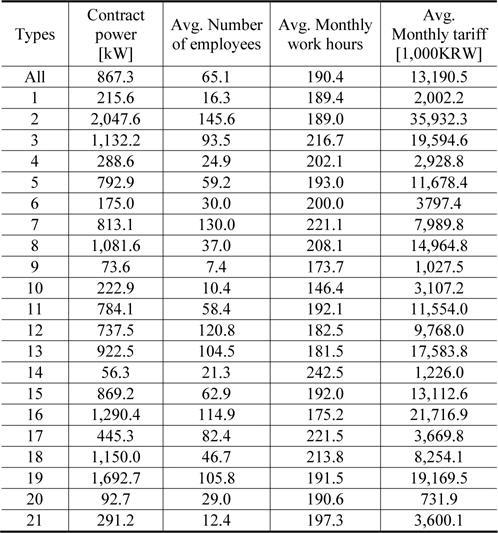 As of the date of survey, average frequency of power outages within the recent 1 year (classified by outage types) to each type of commercial customers are shown in Table 5. Though there were a small number of miscellaneous disturbances such as voltage swell and sag, almost all customers experienced average 1.1 momentary power interruptions in a year. 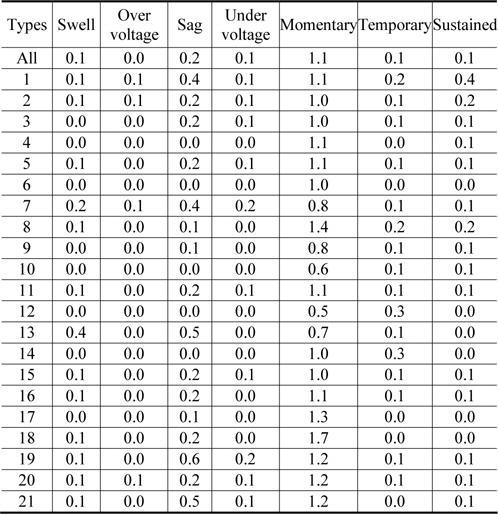 To secure the high reliability of the result from the statistical analysis, inappropriate samples were removed. Among 738 data, those from 39 customers which had zero power consumption record in any month of the recent 1 year were removed. Among the rest of 699 data, customers with no answers for power interruption costs were excluded and their tendency with power outage duration are shown in Table 6. The longer the power outage duration was, the less the excluded data were. It is indirectly assumed that it is more difficult for customers to estimate their power interruption costs with shorter outage duration.

Table 6.Excluded customer with no answers for interruption cost

In the last step, customers with peak-normalized cost which surpassed 3 times of standard deviation value in positive or negative direction were removed. Like shown in Table 7, 2~6 data were removed from each time zone.

Like before, Fig. 3 shows there still are huge differences among answers from customers even with the exclusion of wrong data. It shows 0.146 (p<.001) of Pearson coefficient between power outage duration and power interruption cost which is very low and means it is difficult to find the right function for these two variables. So a technique for descriptive statistics was adopted in this paper to calculate the power interruption cost rather than one for inferential statistics. 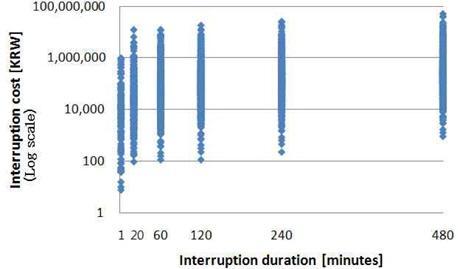 Fig. 4 shows the distribution of interruption cost when the interruption duration is 1 hour. It shows the typical pattern of positively skewed distribution with 6.59 of skewness and big difference between average and median values. In this case, the median is chosen for the representative value usually [7]. 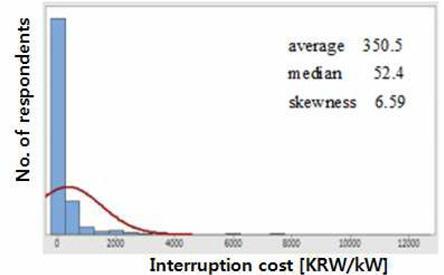 Table 8 shows the power interruption cost for each commercial customer type using median values. In case of less than 3 customers in a type, the representative value was not chosen. In certain types, the power interruption cost for 1 minute or 20 minutes were bigger than those of 1~8 hours because more of 1 minute and 20 minutes data were removed in the process of wrong data exclusion. 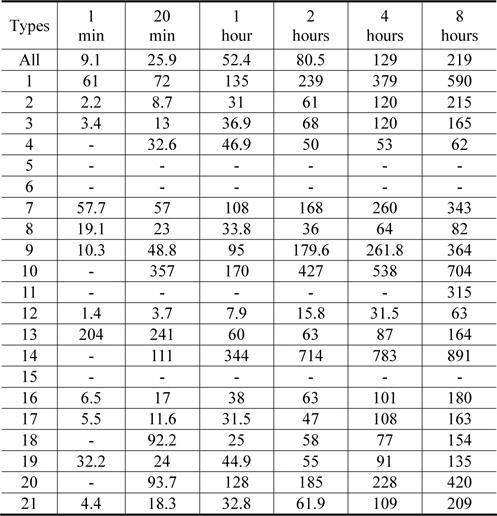 Fig. 5 shows the customer damage functions for types of commercial customers. The biggest ones are that for Type 14(Computer programming, consultancy and related activities) and type 10(Publishing activities). 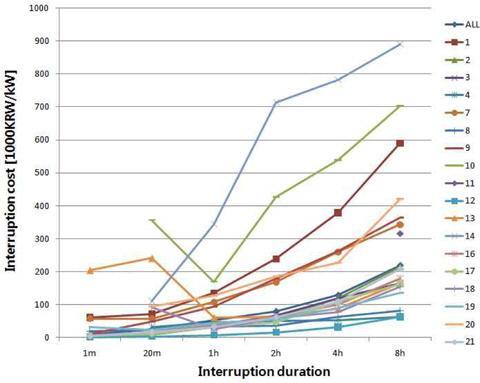 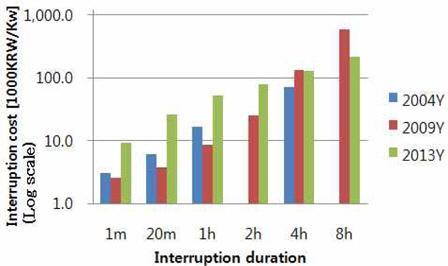 Based on the researches done in the 21st century, a comparison with foreign cases was done. Table 9 shows the power interruption costs of Norway, U.S, PG&E(Power utility) and Korea [10-12]. With U.S data, commercial and industrial customers were aggregated and classified by small and medium/large size customers. With PG&E, they were classified as medium/small and large commercial customers. [$/kW] was the unit for the cost and the recent exchange rate was applied. (1$ = 6.25 NOK = 1,090 KRW)