Anti-Inflammatory Effect of the Extracts from Abeliophyllum distichum Nakai in LPS-Stimulated RAW264.7 Cells

In this study, we investigated whether A. distichum decreases the production of inflammatory mediators through downregulation of the NF- and ERK pathway. Our data indicated that A. distichum leaf inhibits the overexpression of iNOS in protein and mRNA levels, and subsequently blocked LPS-mediated NO overproduction in RAW264.7 cells. A. distichum leaf inhibited degradation and p65 nuclear translocation, and subsequently suppressed transcriptional activity of NF- in LPS-stimulated RAW264.7 cells. In addition, A. distichum leaf suppressed LPS-induced ERK1/2 activation by decreasing phosphorylation of ERK1/2. These findings suggest that A. distichum leaf shows anti-inflammatory activities through suppressing ERK-mediated NF- activation in mouse macrophage.

Inflammation including acute and chronic inflammation presents double-edged sword. In other words, acute inflammation exerts beneficial effects on the maintenance of homeostasis. However, chronic inflammation by uncontrolled active immune cells under certain circumstances can induce carcinogenesis. For example, inflammation-induced oxidative stress induces the mutation of genetic and epigenetic aberrations, which finally leads to the malignant transformation of normal cells into cancer cells (Mannick et al., 1996; Zhang et al., 2013). Under inflammatory response, macrophages produce excess amounts of mediators such as nitric oxide (NO) and pro-inflammatory cytokines (Laskin and Laskin, 2001; Lee et al., 2005). NO has been reported to play a key role in the various forms of inflammation and carcinogenesis (Kroncke et al., 1998; Ohshima and Bartsch, 1994). In addition, there is growing evidence that NO overproduction can induce various harmful responses including apoptosis and necrosis as well as organ failure in autoimmune diseases (Kleemann et al., 1993; Nagai et al., 2003). Thus, NO has been regarded as a ubiquitous mediator of a wide range of inflammatory conditions and reflects degree of inflammation (Kwon et al., 2010), which indicates that NO is a major target for the treatment of inflammation-induced human diseases such as cancer, atherosclerosis, arthritis and septic shock.

Although non-steroidal anti-inflammatory drugs (NSAIDs) have been broadly used for treating inflammation-related diseases, the long-term administration of NSAIDs can induces various and severe adverse effects (Bjarnason et al., 1993). Therefore, plant-derived natural compounds have been targeted for the treatment of various inflammatory diseases due to high effectiveness and very few side effects.

Abeliophyllum distichum Nakai (A. distichum) as the deciduous shrub is a monotypic taxon of Pleaceae and endemic to Korea (Ahn and Park, 2013). Recently, the flower of A. distichum has a protective effect on oxidative DNA damage via its anti-oxidant activity (Ahn and Park, 2013). However, the biological mechanisms for anti-inflammatory effect of A. distichum have not been studied. Here, for the first time we report that A. distichum reduces inflammatory activation through inhibiting ERK-mediated NF-κB activation and subsequently down-regulating iNOS-mediated NO production in mouse macrophage.

The plant parts of A. distichum including flower, leaf and branch were collected at Jangyyeon-myeon Goesan-gun Korea. Five hundred grams of fresh parts was extracted with 1,000 mL of 80% methanol with shaking for 24 h. The methanol-soluble fraction was filtered and concentrated to approximately 20 mL volume using a vacuum evaporator and a fraction was placed in a separating funnel. The ethyl acetate fraction was separated from the mixture, evaporated by a vacuum evaporator and prepared aseptically and kept in a refrigerator until use.

Mouse macrophage cell line, RAW264.7 cells was purchased from American Type Culture Collection (Manassas, VA, USA) and grown in Dulbecco’s modified Eagle medium (DMEM) supplemented with 10% fetal bovine serum (FBS), 100 U/mL penicillin, and 100 μg/mL streptomycin. The cells were maintained 37℃ under a humidified atmosphere of 5% CO2. Ethyl acetate fraction from A. distichum (EAFAD) was dissolved in dimethyl sulfoxide (DMSO) and then treated to cells. DMSO was used as a vehicle and the final DMSO concentration was no exceeded 0.1% (v/v).

Measurement of nitric oxide (NO)

RAW264.7 cells were plated in 12-well plate for overnight. Cells were pre-treated with the extracts at the indicated concentrations for 2 h and then co-treat with LPS (1 μg/mL) for the additional 18 h. After 18 h, 200 μL of the media was mixed with equal amount of Griess reagent (1% sulfanilamide and 0.1% N-1-(naphthyl) ethylenediamine-diHCl in 2.5% H3PO4). The mixture was incubated for the additional 5 min at the room temperature and the absorbance was measured at 540 nm.

Isolation and cytosol and nucleus fraction

Nuclear and cytosolic fractions were prepared following the manufacturer's protocols of nuclear extract kit (Active Motif, Carlsbad, CA, USA). Briefly, RAW264.7 cells were washed with ice-cold PBS containing phosphatase inhibitors and harvested with 1xhypotonic buffer for 15 min at 4℃. After adding detergent, the cells were centrifuged at 15,000 rpm for 30 min and then the supernatants were collected as cytoplasmic fraction. Nuclear fractions were collected by suspending nuclear pellet with lysis buffer and centrifugation.

Transient transfection was performed using PolyJet DNA transfection reagent (SignaGen Laboratories, Ijamsville, MD, USA) according to the manufacturer’s instruction. Briefly, RAW264.7 cells were seeded in 12-well plates and incubated overnight. Then, plasmid mixtures containing 1 μg of pNF-κB-Luc plasmid and 0.1 μg of pRL-null vector were transfected for 24 h. After transfection, cells were pre-treated with the extracts for 2 h and then co-treated with LPS for an additional 15 h. The cells were harvested in 1 x luciferase lysis buffer, and luciferase activity was measured and normalized to the pRL-null luciferase activity using a dual-luciferase assay kit (Promega, Madison, WI, USA).

A statistical analysis was performed with the Student’s unpaired t-test, with statistical significance set at * P < 0.05.

Effect of the part of A. distichum on NO production in LPS-stimulated RAW264.7 cells

Under stimulation, macrophages-generated NO plays an important role in inflammatory response. Thus, we used the mouse macrophage cell line RAW264.7 cells for evaluating anti-inflammatory effect of the part of A. distichum. To determine if the parts of A. distichum could reduce NO generation by LPS, RAW264.7 cells were pretreated with the extracts from the parts of A. distichum (EAFAD) for 2 h and then co-treated with LPS (1 μg/mL) for the additional 18 h. As shown in Fig. 1, treatment of LPS without EAFAD induced NO overproduction in LPS-stimulated RAW264.7 cells, while pretreatment of all EAFADs suppressed LPS-mediated NO overproduction. Among EAFADs, the inhibitory effect of NO production was highest in the treatment of EAFAD-L (extracts from the leaf of A. distichum). Thus, we chose EAFAD-L for further studies. 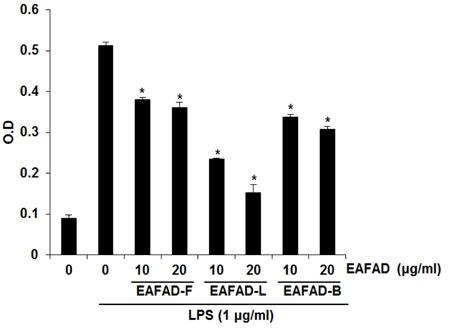 Fig. 1Effect of EAFAD on NO production in LPS-stimulated RAW264.7 cells. RAW264.7 cells were pre-treated with EAFAD at the indicated concentrations for 2 h and then co-treated with LPS (1 μg/mL) for the additional 18 h. After treatment, NO production was measured using the media and Griess reagent. DMSO was used as a vehicle. Values given are the mean ± SD (n = 3). *p < 0.05 compared to LPS treatment without EAFAD. EAFAD-F, EAFAD-L and EAFAD-B means the ethyl acetate fraction from the flower (EAFAD-L), leaf (EAFAD-L) and branch (EAFAD-B) of A. distichum.

Effect of EAFAD-L on iNOS expression in LPS-stimulated RAW264.7 cells 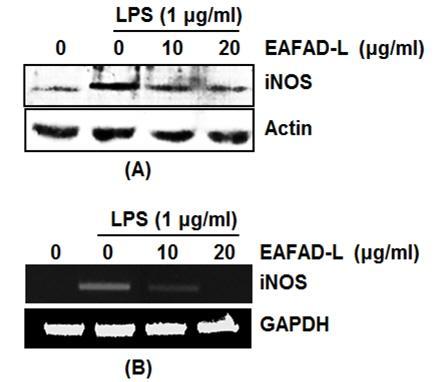 Effect of EAFAD-L on NF-κB activation in LPS-stimulated RAW264.7 cells 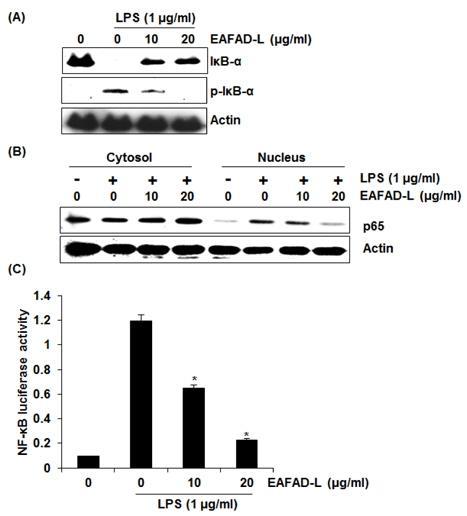 p65 translocation from cytosol to nucleus resulted from IκB-α degradation by various stimuli are essential in NF-κB activation. Thus we examined whether EAFAD-L suppresses nuclear translocation of p65. As shown in Fig. 3B, LPS increased an amount of p65 in the nucleus of RAW264.7 cells. However, pretreatment of EAFAD-L dose-dependently suppressed LPS-induced p65 translocation.

Effect of EAFAD-L on ERK1/2 activation in LPS-stimulated RAW264.7 cells

Fig. 4Effect of EAFAD-L on phosphorylation of ERK1/2 in LPS-stimulated RAW264.7 cells. Cells were pre-treated with indicated concentrations of EAFAD-L for 2 h, and then co-treated with LPS (1 μg/mL) for an additional 15 min. DMSO was used as a vehicle. Cell lysate (30 μg) was subjected to 12% SDS-PAGE, followed by Western blot using anti-p-ERK1/2 and ERK1/2. The proteins were then visualized using ECL detection. β-actin was used as an internal control.

Recently, it has been reported that the flower of Abeliophyllum distichum Nakai (A. distichum) has a protective effect against oxidative DNA damage induced by reactive oxygen species (Ahn and Park, 2013). However, other pharmacological properties of A. distichum have not been studied. Thus, we report that anti-inflammatory effect of A. distichum and the potential mechanisms by which A. distichum regulates an inflammatory response.

Nitric oxide (NO) produced by nitric oxide synthase (NOS) has beneficial effects such as anti-cancer, anti-virus replication and anti-inflammation (MacMicking et al., 1997). However, the overproduction of NO generated by iNOS, one of the NOSs leads to various inflammatory diseases (Bogdan, 2001). Therefore, the inhibition of NO generation through down-expression of iNOS has been regarded as a chemopreventive target for treating inflammation. Among the part of A. distichum, the inhibitory effect against NO generation was highest in the treatment of A. distichum leaf. In addition, A. distichum leaf inhibited the over-expression of iNOS in protein and mRNA levels. These results suggest that the A. distichum leaf may exert an anti-inflammatory effect.

In inflammatory response, NF-κB controls expression of various genes associated with chronic inflammation (Gilmore, 2006). In absence of stimuli, NF-κB activity formed by p50 and p65 is suppressed in the cytoplasm by forming a complex with IκB-α. However, the external stimuli such as LPS activate the IκB-α kinase (IKK), resulting in the phosphorylation of Iκ B-α. Phosphorylated IκB-α is then ubiquitinated and subsequently degraded by the 26S proteasome, which thereby releases NF-κB from the cytoplasmic NF-κB-IκBα complex and allows NF-κB to translocate to the nucleus. Translocated NF-κB activates inflammation genes such as iNOS. Thus, NF-κB has been shown to be the most influencing transcription factor inducing inflammatory response and a promising target for anti-inflammatory therapies (Mankan et al., 2009; Sarkar et al., 2008). In this study, we determined that the A. distichum leaf inhibits NF-κB activation through blocking the nuclear translocation of NF-κB p65 via suppressing IκB-α degradation.

There is growing evidence that MAPKs play a critical role in an inflammatory response (Vanden Berghe et al., 1998). The activation of MAPKs such as JNK, p38, and ERK1/2 protein is known to be involved in the regulation of iNOS. In addition, they play a critical role in the modulation of NF-κB activity (Surh et al., 2001). We found that the A. distichum leaf suppress phosphorylation of ERK1/2 induced by LPS. These results suggest that suppression of NF-κB and ERK pathway is a major mechanism by which A. distichum leaf possesses anti-inflammatory activity.