3D content system is a technology which helps users accept a VR(Virtual Reality) as reality through 3D visual information and feel as if they are in the field, which are utilized in various fields such as education, advertising, home shopping, military training, and mock labs and medical industry. This kind of computer display system significantly contributes to the development of user interface, real-time object recognition, cuttingedge systems for the disabled. Various studies on 3D content including information about a sense of 3D effect and immersion are carried out home and abroad, increasing fields utilizing them[1,2].

The typical technology is a image-based modeling and rendering which establish 3D augmented environment based on images. This method lacks a sense of reality since it provides realistic images of the environment or objects at arbitrary times based on information from images taken at actual environments. However, it has merits in that it doesn't need a traditional 3D modeling process, which reduces costs in th establishment and a production speed of printing images. To overcome these problems, studies on 3D image production through image synthesis and processing are carried out actively home and abroad[3-7].

In this study, a multi-scale 3D panorama content augmented system using a depth-map of images is suggested. By finding matching features from images to add 3D features to an augmented environment, a depth-map is derived and embodied as panorama, producing high-quality augmented content system with a sense of reality. This system adds a high-quality panorama technology to userfriendly technology, providing 3D panorama contents which can be intuitively and easily manipulated, thereby improving a sense of immersion and reality of users.

Panorama VR is to show nearby sight at one's location. it gives an effect just like he feels in the place and it can reenact at certain days. To acquire this effect, panoramic technique is used. Images of real environment taken in 360° are called omni images or omnidirectional images. And images transformed them into cylinder forms, circular or rectangular forms are called panoramic images[8-10]. 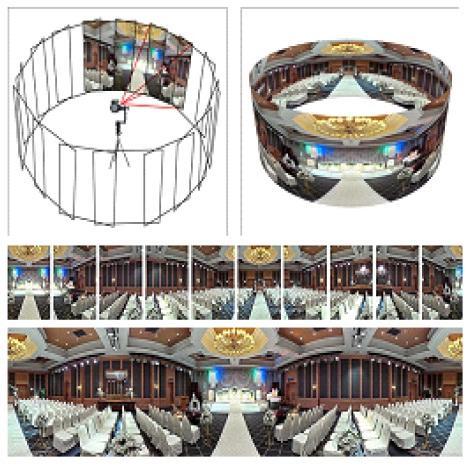 Image mosaic is a method for matching several images and connecting them by general camera. First, set the starting point of photo-taking. And then rotate horizontally by overlapping 10%-50% of images and take 12-24 pictures according to the degrees of overlapping. Connect the overlapping parts to make a one piece of panorama, which is called a stitching process. For images to configure a cylinder by matching with neighboring ones, each image will be bent. Overlapped pictures should be bent in the same angle to fit perfectly. Each picture image is a flat rectangular image first, but to configure a cylinder its corner should be bent. The degrees of bending is different according to a filed of view of a used lens, and the images which become the cylinder part are more distorted. And when playing them next, the images will become flat as original. A final source image will have different dimension and ratio according to each images filed of view. The bigger the filed of view, the higher the height becomes compared to area. In other words, the smaller the filed of view, the larger the panorama. Pictures completing stitching have different tops and bottoms in length since they seem to connect pictures cut long. And then the blending process which make them a panorama picture by connecting them smoothly is car ried out. The process is shown in Fig 2.

To produce high-quality panoramic images effectively, the exact camera direction of each input image should be found out. To do so, after finding the relative camera rotations of neighboring images through image matching, the camera direction is calculated by adding them in order. This approach has demerits in that errors occurring in image matching are accumulated and final panoramic images have gaps or overlays[10-13].

Let x=(x,y) which is a point from projection of X=(X,Y,Z), a point in 3D(dimensional) space that is taken by lens distortion free camera, to 2D image, the relationship between X and x is modelled as follow[14].

u is a vector that represents x as Homogeneous Coordinates. K, as a Camera Calibration Matrix, shows the relationship between 3D point on camera coordinates and 2D point on image within which 3D point is projected. R and t, that represent Rotation Matrix and Translation Vector each, indicate the transformation relationship between world coordinates and camera coordinates. As we call parameters included in vector K as Internal Parameter of camera, f is Focal Length, Q is Aspect Ratio of pixel, S is Skew and (Xc, Yc) is Principal Point.

Rotation Matrix and Translation Vector of camera before rotating are R0 and t0 respectively and those of camera after rotating are R1 and t1. When conforming projection center to zero point of world coordinates for convenience's sake, it becomes t0=t1=0. If homogeneous vector of a point that is from the projection of certain point X at 3 dimensional space to I0 (original image) and I1 (rotated image) is each u0 and u1, then.

That is, as pixel correspondence relationship between two images that are from camera rotation, which is presented by a 3 × 3 matrix H, we call it Planar Homography. Considering that corresponding image point is the same even though multiplying any real number except 0 to Homogeneous Vector, H also can be defined regardless of its scale. Hence, Planar Homography is defined 8 parameters, not 9 parameters. Actually, as the number of parameter that is included in K from H=KR01K-1 is 5 and the number of parameter that is in R01 is 3, we can aware that independent parameters that are composed of H is 8. This Homography is called as 8-Parameter Homography.

Given two images, finding H which is pixel correspondence relationship between the two images is Image Registration. In general, H can be calculated with more than 4 correspondent points but it takes caution to get more accurate H. Therefore, we assume that camera satisfies this normalized model. Table 1. shows the conditions of camera based on normalized model.

Therefore, the number of independent parameter included in H on normalized model is 4(focal point distance f and three rotating angles within R 01), which we call as 4-Parameter Homography. General rotation matrix R is divided as follow.

In formula(4), R(ψ), R(θ), R(∅) are respective matrix that present rotation transformation from each X, Y, Z axis and ψ, θ, ∅ are called Euler Angle. Given Planar Homography H in normalized model, calculating K and R are as shown below. Matrix K can be divided as follow.

As R is Orthogonal Matrix, it satisfies following formula. After calculating f from formula(8), it gets R by substituting to formula(7).

In this moment, k1,k2 are radial distortion coefficients. In common,

To the contrary when (xu,yu) is given, (xd,yd) is as follow.

To produce multi-scale panorama image, the relationships between images are set internally. Multi-scale panorama image is produced through the blending process which makes input images into panoramic pictures. According to the change of image scale, the exact corresponding locations with neighboring images are automatically calculated, securing the exactness within sub pixels and stitching the images. Fig 3. shows a general configuration map of multi-scale 3D panorama augmented system using a depth-map suggested in this study. Fig 4. shows the steps of stitching images derived from a depth-map, producing depthmap panorama, and embodying multi-scale 3D panorama augmented system. 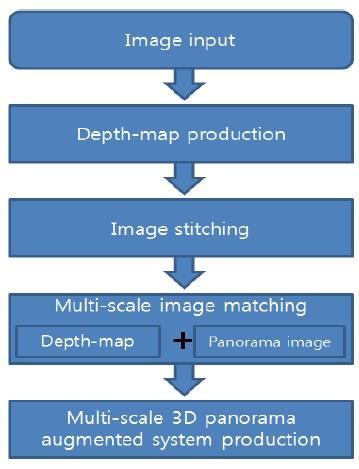 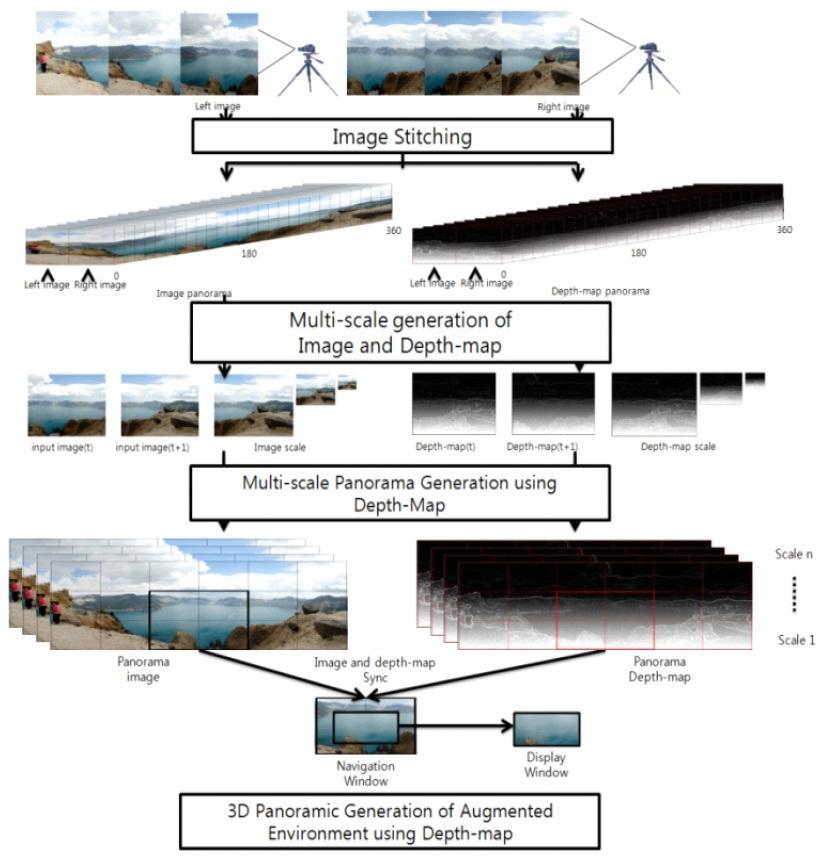 In this study, features matching images found out to add a sense of 3D effect to the augmented environment and a depth-map is used to embody 3D panorama, producing the augmented system with a sense of reality. This system will overcome the limits of 2D panorama technologies and provide users with a natural navigation, providing an improved sense of reality and immersion. Multi-scale 3D panorama augmented system using depth-map makes users feel as if they are at the location which photo-taking is taken and seeing the surroundings, in other words of a sense of 3D effect. Multi-scale 3D panorama augmented system provides highquality 3D images with a sense of reality which has a free vision of close objects and distant backgrounds. This suggests a possibility in that it can be utilized in establishing augmented reality system based on images, attracting a attention from many people.

Further studies will be carried out based on computer vision technologies including image processing and interpretation technologies and computer graphics configuring media images with a sense of reality from the interpreted images to commercialize tourist attractions tours with a sense of reality for interaction with users and embodied images and high-quality digital content of public relations office.