Radio frequency spectrum is a precious resource for wireless communication systems. With the rapid development of wireless communication services, there is an increasing demand for spectrum. Existing static spectrum allocations policies have resulted in the low utilization of spectrum[1-4]. The dynamic spectrum access (DSA) policy is proposed as an alternative to efficiently use radio spectrum[5-8]. In DSA, portions of the spectrum are allocated to one or more users, known as primary users (PUs). Spectrum use is not exclusively granted to these users, although they have a higher priority. Other users, referred to as secondary users (SUs), can also access the allocated spectrum, provided the PUs are properly protected. By doing so, the radio spectrum is reused opportunistically, thereby significantly improving the spectrum utilization[5-8].

Cognitive radio (CR) technology is an important means to realize DSA. Users with cognitive functions can sense the spectrum environment using intelligent means. They can automatically search and use available spectrum, thereby realizing authorized spectrum sharing[5-8]. In[9], a spectrum hole is defined as a (time, location, frequency-band)-tuple that a secondary user can use, while maintaining interference with all primary systems within an acceptable level.

In order to reuse the spectrum, a secondary user must be able to reliably identify a spectrum hole. In the above definition of a spectrum hole, the key factor is the impact of SUs on PUs. For a temporal spectrum hole, the impact refers to the probability when PUs and SUs simultaneously use the same spectrum. This has been referred to as the collision probability[10]. The collision probability ignores the position relationship between SUs and PUs, which is essential for exploiting spatial spectrum opportunities. For a spatial spectrum hole, this impact refers to power which is received by primary receriver from secondary transmitters, referred to as interference [11-13]. It alternately refers to the outage probability of the primary receiver, which is a function of the interference. The interference and the outage probability only reflect the intensity of the interfering signal. They does not reflect the duration of the interference. It also cannot fully reflect the impact of SUs on PUs. In [14], the Bayesian risk function was minimized by selecting the sensing threshold. This was a tradeoff between the risk of collision probability and secondary users losing communication opportunity.This tradeoff exploited both the temporal and spatial spectrum opportunity, and greatly improved the spectrum utilization. However, it lacks a theoretical basis. In [15], a three-region scheme for space-time spectrum sensing and access was designed with one primary transmitter at the center. This includes the black, grey, and white region. However, the authors have not jointly considered the interference and collision probability, as above, which doesn’t fully reflect the impact of SUs on PUs.

The proposed definition of a spectrum holes is as follows:

Definition: a spectrum hole is defined as a (time, location, frequency-band)-tuple that a secondary user can use, while maintaining the throughput loss to all primary users in the specified frequency band within an acceptable level.

As shown in Fig. 1, we consider a network model consisting of a pair of fixed PUs (including a primary transmitter (PT) and a primary receiver (PR)) and a pair of SUs (including a secondary transmitter (ST) and a secondary receiver (SR)). The SUs opportunistically exploit a spectrum band licensed to the PUs. Assume that the PUs are rate-adaptive digital communication systems, and occupy the spectrum band with a probability q .

In Fig. 1, the circles with radius dare the protected regions. Any active transmitter cannot be inside this region, to exclude the possibility that the receive signal and interference power reaches infinity. It's worth noting that the protected region of ST is used to exclude the possibility that the sensing receive power reaches infinity.

Consider a wireless channel model with both large-scale path loss and small-scale fading. Free-space path loss, hPL , models the average power changing with distance. Rayleigh fading hFD is adopted for small-scale variation. The channel model between any Tx-Rx pair can then be written as follows:

where hFD ~ CN(0.1) is a complex circular Gaussian random variable with independent real and imaginary parts with equal variance; and

where A is a constant dependent upon the frequency and transmitter/receiver antenna gain, r is the distance between the Tx-Rx pair, and a is the path loss exponent. Without loss of generality, we normalize A=1 for simplicity and consider a³ 2, which is typical in practical applications.

To sense the primary transmission, ST must perform a hypothesis test between the following two hypotheses: H0 (primary signal absent) and H1 (primary signal present). This test is conducted as follows:

where N is the number of samples, y(i) is the received samples at ST, x(i) CN(0,S2x) is the signal received at ST from PT after path loss and fading, and w(i) is assumed to be a circularly-symmetric complex Gaussian random variable with mean zero and one-sided power spectral density S2w , namely, w(i)CN(0,S2w) . Based on the channel model in (4), Sx2=Pph2PLd where Pp is transmit power of PT. The primary signal x(i) is independent of the noise w(i).

The decision statistic is . The probabilities of miss detection pm=Pr{H0/H1} and false alarm pf=Pr{H1/H0} are [16]:

where g is the signal to noise ratio (SNR) at ST, g=Ppr-aSw-2 in the above channel model, and e is the decision threshold. is the tail probability of the standard normal distribution.

4.2 Throughput Achieved in Every Channel State

In the system models described above, we assume the bandwidth is 1Hz. As the network model only consists of a pair of PUs and SUs, we replace the throughput with channel capacity [17]. The throughput of the PUs achieved in state1 is

The throughput of the SUs achieved in state2 is

We assume that the SUs and PUs can vary their data rate through a combination of adaptive modulation and coding. This allows the transmitter and receiver to employ the most reliable communication at the highest rate permitted, given the signal-to-interference-plus-noise ratio (SINR).We assume that they use random Gaussian codebooks. As a result, their transmitted signals can be treated as white Gaussian processes. The transmission of other users is treated as Gaussian noise. The maximal rate of users when the secondary user and the primary user share the spectrum can be represented as follows:

The throughput of the SUs achieved in state3 is

The throughput of the PUs achieved in state3 is

The average throughput of the SUs is

The average throughput of the PUs is

The maximum average throughput of the PUs is Tpmax=qRp1 .

Maximizing the available spatial-temporal spectrum opportunity using the spectrum holes definition in this paper can be formulized as follows:

where 0 #k 1 is a scaling factor that denotes the maximum average throughput loss ratio that is acceptable for PUs due to interference of the SUs. We first introduce the following proposition to solve this problem:

Proposition1: pf is a decreasing function of pm .

Therefore pf is a decreasing function of pm . Proposition 1 is proved.

The objective function in equation (19) is a decreasing function of pf .

We can obtain from the constraint condition (20):

It is worth noting that kRp1(Rp1-Rp3)-1 > 1 can occur when r is large enough. However, miss detection probability is not greater than 1. In this case, we order pm*=1 and pf*=0 to maximize the SUs throughput.

The maximum average throughput of the SUs is:

5. Comparison of the Proposed and Conventional Definitions

5.1 Comparison to the Collision Probability Constraint

We maximize the available spatial-temporal spectrum using the spectrum holes definition as follows [10]:

where is the minimum miss detection probability. The inequality (28) constrains the collision probability between the PUs and the SUs. We easily obtain the optimal false alarm probability to maximize the SUs throughput as follows:

The maximum average throughput of the SUs is:

In this case, the maximum value of k is:

where Rp3min is the minimum value of Rp3 in the case of dsp=max(rp|sinq|,d) . Substituting km into (24), we obtain

Substituting (32) into (26), we obtain the maximum average throughput of the SUs in the case of k=km in the proposed definition:

where is obtained by substituting into (25).

It is easy to prove (34) is greater than zero. That is, the definition of spectrum holes based on the throughput loss is more advantageous than the one based on the collision probability constraint in terms of spectrum utilization.

5.2 Comparison to the Bayesian Criteria

Using Bayesian criterion, the optimization objective is defined as a risk function involving the miss detection and false alarm probabilities as follows [14]:

The sensing threshold is designed to minimize the risk in the different cases of location information:

We obtain the optimal detection threshold:

Numerical simulations in Fig. 2, Fig. 3, and Fig. 4 were conducted using the conditions described in Table 1.

Table 1.the Parameters and Their Value in the Following Numerical Simulations 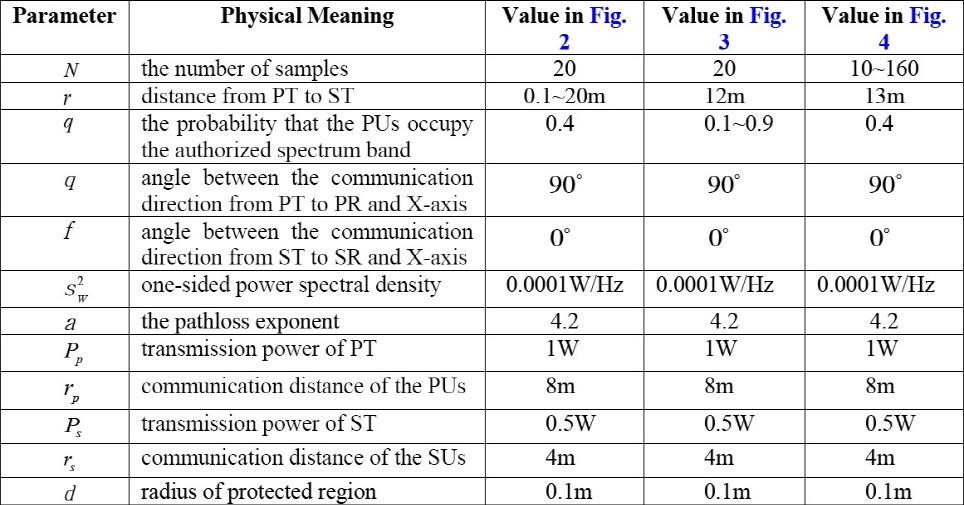 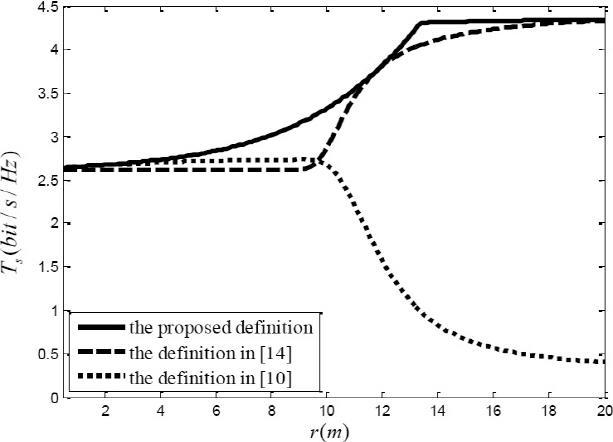 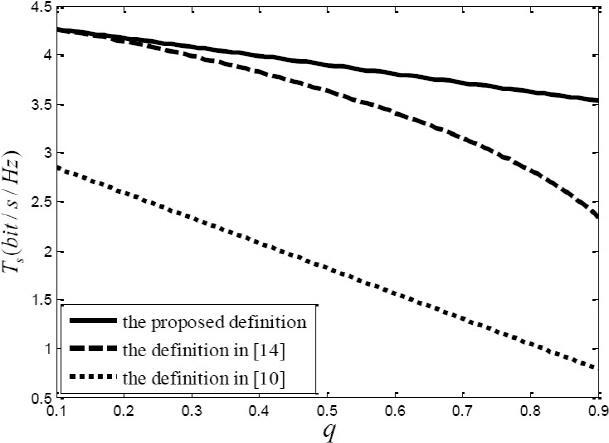 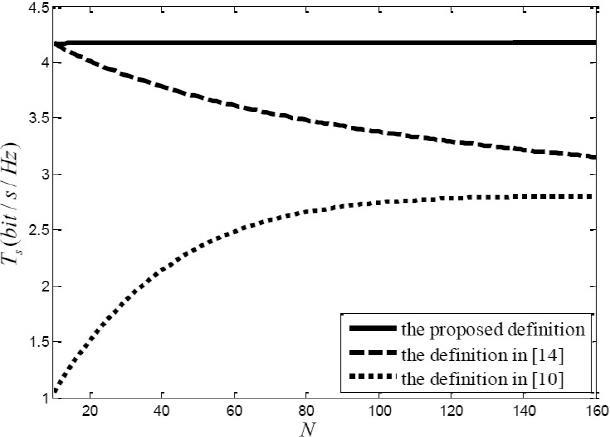