Bubble column reactors are considered the reactor of choice for numerous applications including oxidation, hydrogenation, waste water treatment, and Fischer-Tropsch (FT) synthesis. They are widely used in a variety of industrial applications for carrying out gas-liquid and gas-liquid-solid reactions. In this paper, the computational fluid dynamics (CFD) model is used for predicting the gas holdup and its distribution along radial and axial direction are presented. Gas holdup increases linearly with increase in gas velocity. Gas bubbles tends to concentrate more towards the center of the column and follows a wavy path.

Bubble columns are cylindrical vessels filled with water, wherein gas is sparged at bottom via a distributor, in the form of bubbles, into liquid or liquid-solid suspension (slurry bubble columns). The liquid inside column begins to expand as soon as gas is introduced. Bubble column offer advantages of good heat and mass transfer characteristics. Ease to construct and operate, absence of moving parts, low maintenance cost and relatively cheap to install are some of the factors that render the bubble columns an attractive choice as reactors for the described processes.

The potential of Computational Fluid Dynamics (CFD) for describing the hydrodynamics of bubble column has been established by several publications in the past (Baten and Krishna, 2005; Wang and Wang, 2007). What happens quantitatively, when fluids flow, how fluid flow, how are the velocity vectors, how the pressure contours are predicted by the CFD simulations. Thus CFD can successfully be used to study the hydrodynamics of bubble column reactor. In the present paper CFD simulations have been carried out to predict gas holdup and its distribution along the column in axial and radial direction.

Geometry. FLUENT preprocessor GAMBIT is used as geometry and mesh generator. A two dimensional bubble column of length 1 m and diameter 0.1 m is used which gives a length to diameter (L/D) ratio of 10. Mesh size of 0.005 m × 0.001 m is used in L/D directions. Bottom face contain 0.002 m diameter inlet for air at the center. Velocity inlet and pressure outlet boundary condition is used. The computational grid details are shown in the Figure 1.

Simulations were carried out for 0.003 m bubble diameter with air water system, operating at superficial gas velocities ranging from 0.001 m/s to 1 m/s. Initial volume fraction of water was taken zero for all the simulations. Rake was defined from 0.5 m to 1 m at the interval of 0.01 m counting to 50 in numbers. Computational grid details are shown in Figure 1. The time stepping strategy used in all simulations is 5000 time steps with 0.0001 time step size, next 2000 steps at 0.001 and remaining steps at 0.01 until steady state was achieved. The steady state was achieved in about 9000 time steps, but simulations were run until 60 seconds i.e. 12750 time steps. Steady state was indicated where all the variables remained constant. 2D simulations were carried out on Windows 7 platform, running on Intel Core (TM) I3 processor with 3.2 GHz CPU frequency. Each simulation was completed in about a day. 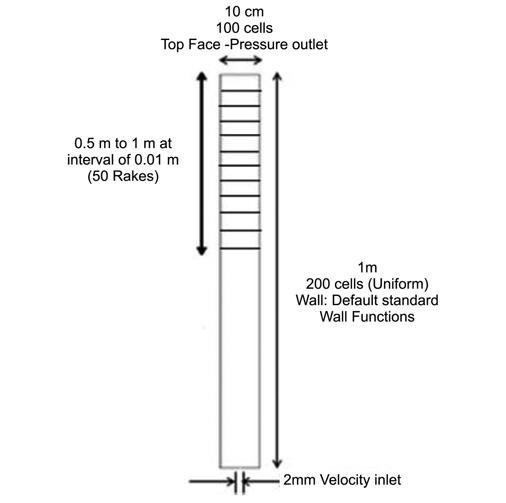 Equations. The governing equations are given below:

4. Conservation of momentum for gas phase

5. Conservation of momentum for liquid phase

The Eulerian multiphase model (two phase) available in Fluent 6.3 was chosen to carry out computer simulation. Heat and mass transfer were not activated. The equation requires time averaged continuity and conservation equations for each phase.

Volume fraction of gas and liquid phase is calculated from Eqs. (1) and (2) respectively, with the condition that the volume fraction of phases sums to one. Eqs. (4) and (5) describe momentum balance for gas and liquid phases respectively. The k-€ turbulence model is used and solves the standard k-€ equations. The standard k-€ model is a semi empirical model based on model transport equations for turbulent kinetic energy (k) and the dissipation rate (€). The mixture density and velocity, ρm and ⊽mand are computed from:

Radial Distribution of Gas Holdup. The radial distribu-tion for time averaged local gas holdup for varying super-ficial gas velocity at a height of 0.5 m from the gas distributer is shown in Figure 3. With increasing gas velocities, gas holdup increases. This is because gas bubble tend to concen-trate more and more in the central core of the column (Baten and Krishna, 2005). This concentration of bubbles in the central core causes a substantial increase in the liquid circulation. 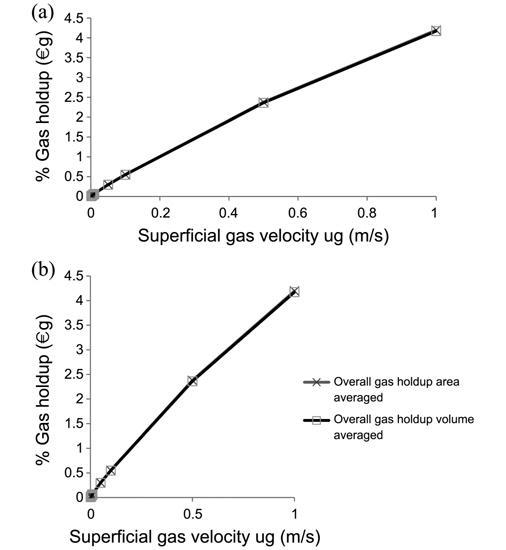 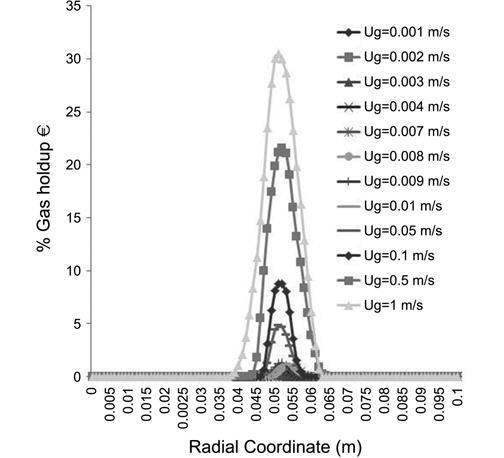 Figure 3.Radial distribution of gas holdup. Values measured at a height of 0.5 m from the gas distributor. 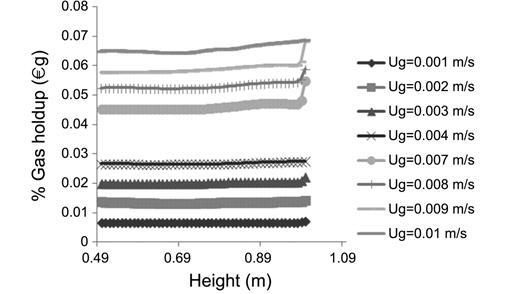 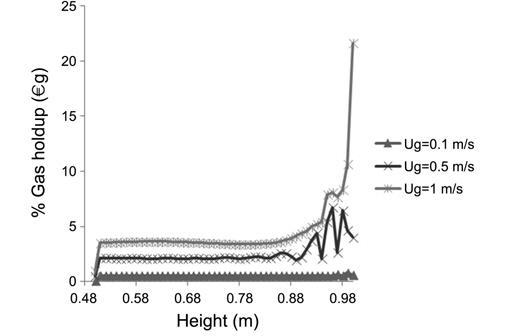 Predicting Wavy Nature. Figure 6 shows the radial distribution of gas holdup at different heights. It is useful in predicting the wavy flow nature of gas. The peaks of the each curve are not situated along a straight line but these peaks of each curve are displaced in radial direction. This indicates the movement of the central core of gas. So it is clear that the gas follows a certain wavy flow pattern. Similar results are also reported by Joshi et al. (2002).