There continues to be significant interests focusing on the synthesis and characterization of lanthanide coordination polymers because of their novel structural features and potential applications in magnetism,1 catalysis,2,3 lumine-scence, 4-7 hydrogen storage,8 molecular recognition and adsorption,9 medical devices,10,11 sensors and displays,12 etc.

As we know, coordination polymers contain two main components, metal (connector) and ligand (linker). It is very crucial to choose reasonable ligands during the synthesis of coordination polymers. Herein we chose 1,4-naphthalenedi-carboxylic acid (1,4-H2NDC) as the main ligand due to following interesting features: (i) It has two carboxylate groups with four oxygen atoms, which have strong binding toward lanthanide ions; (ii) It can form novel frameworks due to the versatile coordination modes of two carboxylate groups; (iii) It can be partially or completely deprotonated to form HNDC− and NDC2− by controlling the solution pH carefully;13 (iv) The naphthalene ring with easily delocalized π electrons enables efficient energy transfer between metal and ligand. Ancillary ligands could be employed to occupy additional coordination sites considering the high coordination number of lanthanide ions. 1,10-Phenanthroline (phen) has been widely used as an ancillary ligand in the synthesis of coordi-nation polymers, which is very helpful to construct supramolecular structures via π-π aromatic interaction.14,15 It can also increase the rigidity and thermal stability of the resulted coordination polymers.

Determination of Crystal Structures. A suitable single crystal of each compound was selected and glued to a thin glass fiber. Single crystal diffraction data for the these compounds were collected at 293 K on a Bruker Smart APEXII diffractometer with graphite monochromatized Mo Kα radiation (λ = 0.71073 Å) in an ω scan mode. The structures were solved by direct methods and refined by full-matrix least-squares methods on F2 using SHELXL-97 program. All non-hydrogen atoms of carboxylic acids and phen molecules were refined with anisotropic displacement parameters. Crystal data and structure refinement parameters for compounds 1-5 were listed in Table 1. Selected bond lengths and bond angles for compounds 1-5 were listed in Table S1, ESI. 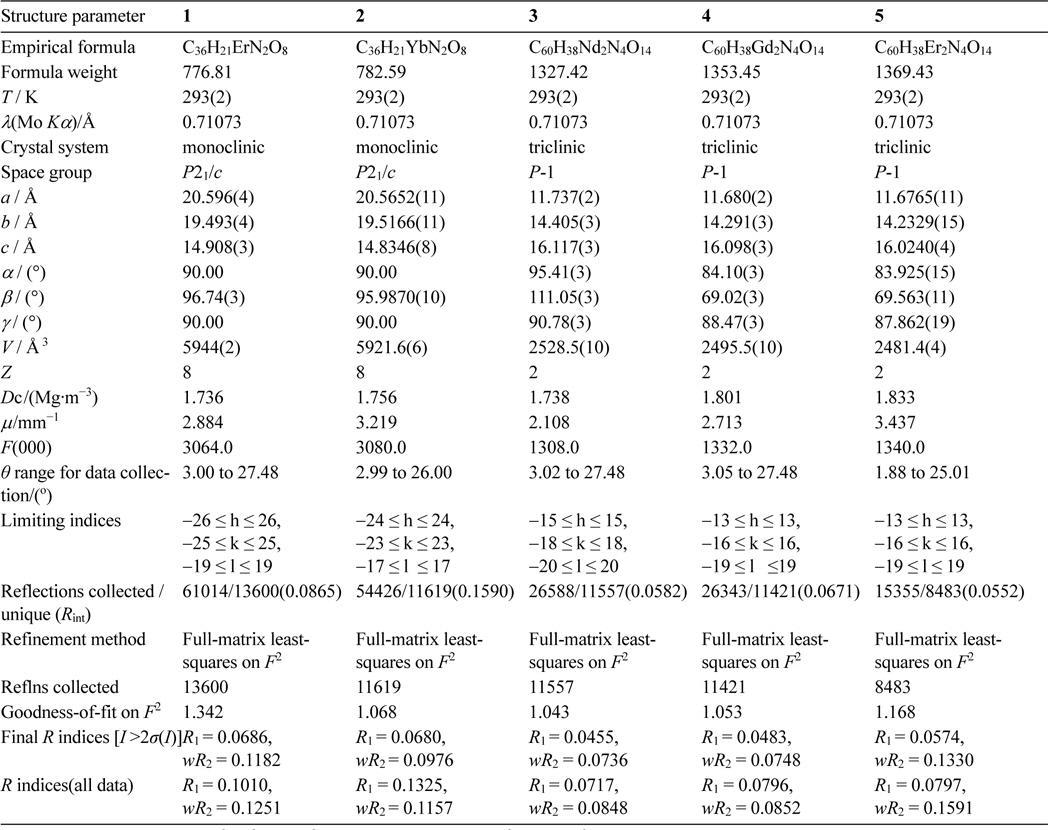 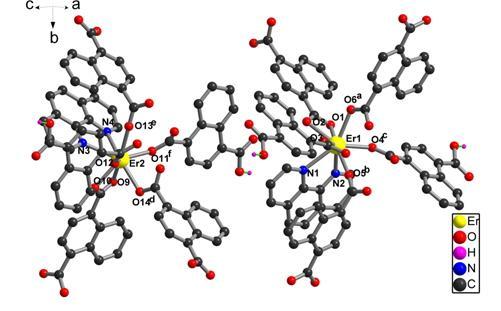 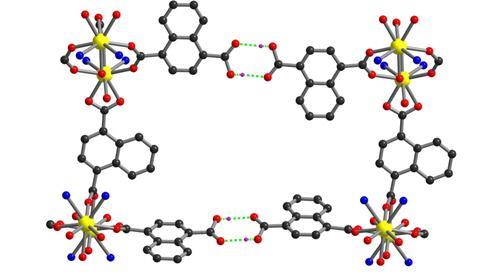 Figure 3.The coordination mode of carboxylate groups in compound 1. 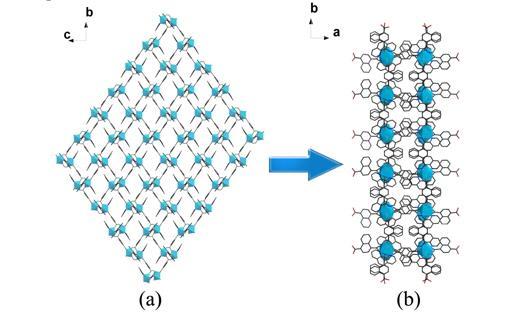 Three lanthanide (La, Eu, Ho) coordination polymers constructed from 1,4-NDC2− and phen have been reported.21 Compounds 3-5 possess similar structure to those reported lanthanide coordination polymers, but they could not be prepared in accordance with the literature experimental conditions. Various factors could influence the structure of the lanthanide coordination polymers, such as temperature, solution pH, solvent and the ratio of metal ion to ligand.26-28 We modified the reaction procedures with the addition of 2 drops of pyridine instead of NaAc·3H2O, reducing the amount of solvent from 15 mL to 10 mL, changing the temperature from 160 °C to 140 °C, and extending the reaction time from 75 h to five days. Pyridine seems to play an important role in the formation of these coordination polymers because no crystalline samples were obtained without adding pyridine during the synthesis for compounds 1-5. 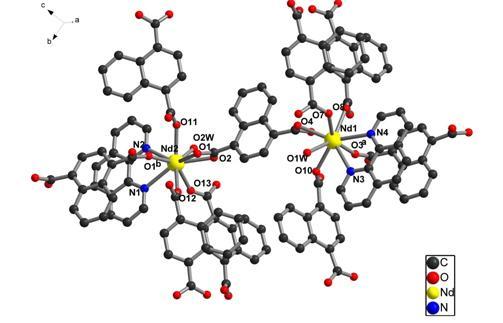 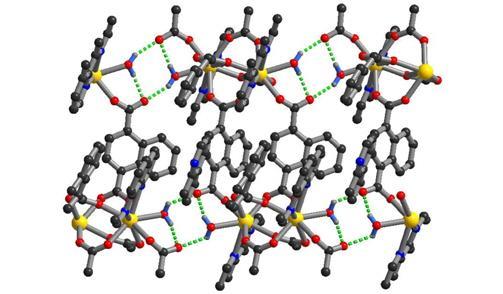 Compounds 1-5 all have O−H⋯O intermolecular hydro-gen bonds with an octatomic ring, but the composition atoms of the ring in compounds 1-2 are different from those in compounds 3-5.

X-ray Powder Diffraction (PXRD) Analysis.In order to confirm the phase purity of the obtained crystals, PXRD experiments were carried out on compounds 1-5 (Fig. S4, ESI.). The experimental PXRD patterns were entirely con-sistent with the simulated PXRD patterns generated based on the single-crystal data of compounds 1-5, which proved the purity of each compound. The similar PXRD patterns between compound 1 and compound 2 indicated that they are isostructural to each other. Similar case also happened for compounds 3-5.

The TGA curves of compounds 3-5 are similar. Therefore only TGA plot of compound 4 is described in detail. From the TGA curve of compound 4, we can easily draw a conclusion that the first weight loss of 2.58％ from 140 °C to 300 °C is due to the dissociation of two coordinated water molecules (calcd. 2.66％). When the temperature is close to 500 °C, the organic ligand phen is gradually decomposed leading to the second weight loss of 25.81％ (calcd. 26.60％). It continues to decompose into a final inorganic oxide Gd2O3 with a weight remaining of 25.80％ (calcd. 26.87％).

Luminescent Properties. Most lanthanide ions are well-known to give rise to luminescence and have been widely used in optical and medical devices.32 We have examined the solid-state luminescence properties of our lanthanide coordi-nation polymers at room temperature, but only the ligand-based emissions were shown in the visible light region which is in agreement with the literature reports.17,33