2. Strategy for Improving the Rectifier Efficiency

2.1 Conventional control method of a rectifier

Fig. 1 shows configuration of DC power supply system in a data center. It is composed of multiple three phase PWM converters which have same specific. Respective converters are controlled by vector control.

Fig. 1.Configuration of a rectifier [2]

In order to control load allocation, it is necessary to adopt active power regulation (APR) as converter control scheme. APR can control the amount of input AC power delivered to each converter but cannot control DC voltage. If all converters are operated under APR, DC voltage cannot be maintained at appropriate levels and the DC power supply system cannot keep their stable operation.

A new control method proposed in this paper is to maintain DC voltage by DCVR converters and to control load allocation by APR converters at the same time. Fig.3 shows architecture of the proposed method. Conv#1 and Conv#2 are operated under DCVR and APR, respectively. Conv#1 keeps DC voltage at specified level and assures stable electric power supply to ICT loads. When Conv#2 determines input AC power Pin-2 [kW], Conv#1 converts the difference Pin-1 between total input Pinput and Pin-2 [kW]. Since Pin-2 is controllable with Conv#2, Pin-1 is also variable. That is, the proposed method can change load allocation to converters of a rectifier. In addition, start-and-stop control of converters is included in the proposed method.

The objective function of (1) is minimization of total input AC power of a rectifier under a required constant load Pload . This formulation corresponds to maximizing rectifier efficiency.

3.2 Solution for the optimization problem

The problem formulated in the previous section is nonlinear optimization one, so that it is difficult to solve it without any transformation. Therefore, by applying Lagrangian relaxation method to the problem, it is transformed to unconstrained optimization problem as in (6).

This problem is solved as follows. At the first step, the objective is minimized in terms of input AC power of converters Pin-i by Lagrange’s method of undetermined multipliers. At the second step, the objective is maximized in terms of Lagrange multipliers λi1 , λi2 by penalty function method. By repeating these two steps, the solution is converged to optimum one which maximizes rectifier efficiency.

As mentioned later, the converter efficiency ηi (Pin-i ) is represented as segmented linear functions of input AC power, η ( j) (Pin-i ) . As a result, the abovementioned optimization problem becomes a complex combinatorial optimization problem with respect to the functions η ( j) (Pin-i ) . Therefore, the optimum solution is searched according to the algorithm as shown in Fig. 4. 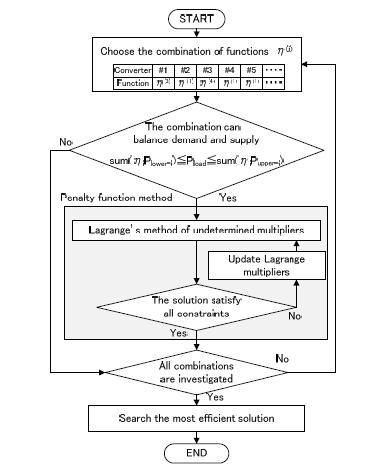 In this section, at first, a rectifier used in an actual data center is modeled. And then the validity of the proposed rectifier control is checked by solving the load allocation problem with respect to the model.

The rectifier model used for the validity check is composed of seven converters. The rated power of individual converter is 15 kW and the converters are connected each other as shown in Fig. 1. Fig. 5 shows the efficiency characteristic curve ηi (Pin-i) of an actual converter [6], which is represented by 12 measurements and 11 segments η ( j)(Pin-i) (j=1,···,11). The converter is designed so that conversion efficiency peaks at about 50% of the rated power. This is because average load level of data center is about 50% of installed capacity [7]. 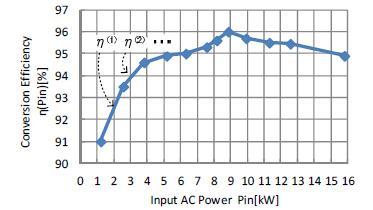 Fig. 5.Efficiency characteristic of a converter [6]

In the case of light loads, 30 kW and 40 kW, the rectifier efficiencies are improved widely. This improvement depends on the number of operated converters. In the conventional control, a total load on the rectifier is allocated equally to all seven converters, so that each converter must be operated at a lower efficiency load level.

On the other hand, the proposed control method operates a part of the converters so as to maximize the rectifier efficiency.

To implement the optimal load allocation of rectifier, which converters should be controlled in DCVR and the others are in APR must be determined suitably. For example, in the case of 30 kW load in Table 1, since there are four active converters in the optimal load allocation, the number of simple combinations of DCVR converter and APR one is 24=16. However, since at least one DCVR converter is needed to maintain the DC voltage in the data center, all converters could not be operated in APR. And also, DCVR converters supply the same amount of power. If Conv#4 supplying power of 4.088 kW is operated in DCVR, the other converters supplying 9.079 kW cannot be operated in DCVR. Therefore, control scheme assignment shown in Table 2 can be implemented if Conv#1, #2 and #3 which convert same power of 9.079 kW are not distinguished.

Table 2.Assignment of converter control scheme in the case of 30 kW load

This paper proposes a new control method of multipleparallel- converters rectifier which enables to enhance its conversion efficiency by modulating load allocation to converters. In order to find efficient load allocation, rectifier efficiency maximization problem is formulated and its solution is developed. The result of numerical computation shows that the proposed method is valid in all of load levels. And also it is indicated that the rectifier efficiency is improved by increasing the number of converters which is operated in maximum efficiency.