The conventional power systems are changing globally, and a large number of dispersed generation units, such as wind turbines, photovoltaic (PV) generators, fuel cells, small hydro, and wave generators, are being integrated into power systems at the distribution level. Among the renewable energy sources, the wind power generation system (WPGS) is the fastest growing. However, the WPGS output power fluctuates due to wind speed variations. This may cause some serious problems with respect to frequency and voltage oscillations when a large number of wind power generators are connected to the grid system [1-3].

To overcome these shortcomings, the smoothing control of the wind power generator output is very important. In the case of an existing microgrid, an energy storage system such as a battery energy storage system (BESS), an electric double layer capacitor (EDLC) or a superconducting magnetic energy storage (SMES) is mainly used for compensating the fluctuation of output power. Among them, high temperature superconducting magnetic energy storage (HTS SMES) has been reported as an effective solution to compensate for the fluctuations of generated power at common coupling points of the WPGS [4].

This paper discusses an effective application scheme of a back-to-back converter with shunt-connected HTS SMES for frequency stabilization within the utility regulation limits [5, 6]. An adaptive controller was designed for the back-to-back converter to improve the performance of whole system. The current controlled technique is the most essential in design application of the back-to-back converter with shunt-connected HTS SMES, because it can dominate the performance of WPGS connected to the grid system. Conventionally, the PI controllers are very common in the control of the back-to-back converter due to their simple and good performance in a wide range of operating conditions. However, they cannot always effectively control systems with changing parameters or strong nonlinearities, and they may need frequent online returning of their parameters [7]. In addition, the fuzzy logic controller shows the potential to provide an improved method even in the wide parameter variation [8]. Hence, in this paper the conventional PI controller was replaced by a fuzzy-PI controller. Then, the authors analyzed the frequency variation of a grid-connected wind power generation system using PSCAD/EMTDC (Power System Computer Aided Design/Electromagnetic Transient Including DC).

For these purposes, a large-scale HTS SMES is needed; however, the time response should be considered for practical application to the power system, in which the high speed compensation property of SMES is required. Compared to a single magnet SMES, a dual magnet SMES can ensure both high power and speed, as the operating range of the dual magnet SMES is larger than that of the single magnet, even though they have the same capacity [9]. Furthermore, the control speed of a power conditioning system (PCS) that handles the power transfer between the SMES and AC system also affects the time response of the whole system, and the back-to-back and two-quadrant DC/DC converters with an adaptive control strategy can improve the system’s efficiency.

The effectiveness of the back-to-back converter with shunt-connected HTS SMES for the frequency regulation was verified. The operating characteristics of the dual magnet SMES were analyzed using PSCAD/EMTDC and the simulation results are discussed in detail. 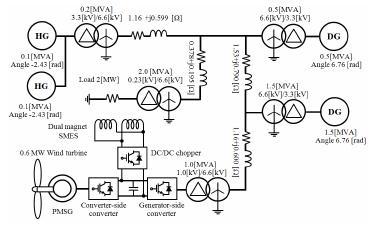 where R is the blade radius (m), Cp is the power coefficient of the wind turbine, λ is the tip speed ratio, β is the pitch angle (deg), and ω is the mechanical angular velocity of the blade (rad/s). The pitch angle control was also applied in the modeled wind turbine to limit the output power at the terminal of the generator when the wind speed was greater than the rated speed.

The capacity of SMES is strongly related to the capacity of WPGS and the features of utility. The HTS SMES as depicted in Table 2 was modeled for application to the proposed system.

2.2. Adaptive control design of the back-to-back converter with shunt-connected SMES

The control block diagram of converters is depicted in Fig. 2. The generator-side converter extracts the maximum power from the wind turbine by controlling the active power, based on Eq. (1), and controls the active power to zero. Fig. 3 represents the control block diagram of the generator-side converter. In this control strategy, the control system based on the d-q rotating reference frame is adopted. 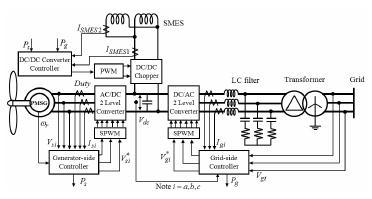 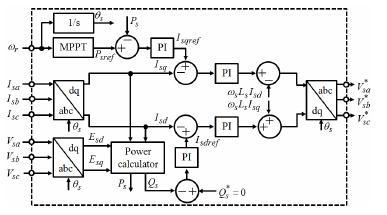 Fig. 3.The control block diagram of the generator-side controller system 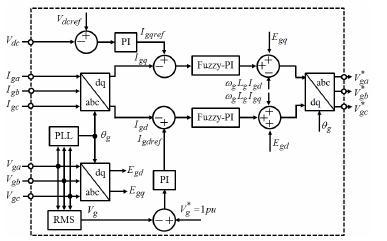 Fig. 4.The control block diagram of the grid-side controller system

Fig. 5 provides a block diagram of the current control loop for the grid-side converter. The controller is composed of a Fuzzy-PI controller, a processing delay, and the plant system.

The general structure of fuzzy logic control is shown in Fig. 6. The FLC consists of fuzzification, membership function, rule base, fuzzy inference and defuzzification. 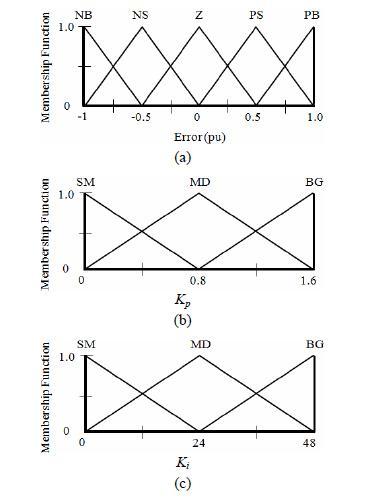 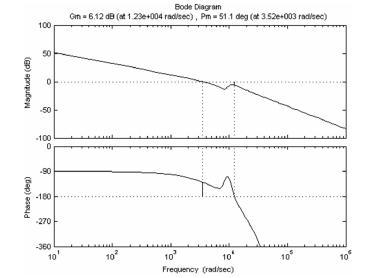 Fig. 8.Bode diagram of the current loop of the grid-side converter

The gain values of Kp and Ki for the PI controller of the current regulator are calculated for the changes in the input of the FLC according to the rule base. The rule base includes five rules as follows:

where n is the number of rules, µi is the degree of the membership function for the ith rule, and Yi is the consequence membership function. The PSCAD/EMTDC software does not include a component for FLC. Therefore, the authors developed a new FLC component for Fuzzy-PI in PSCAD / EMTDC by using FORTRAN codes. The detailed parameters of the back-to-back converter system are summarized in Table 3. 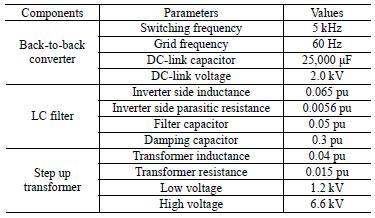 3. Frequency Regulation by the SMES System

The grid frequency has to be regulated within the utility regulation limits of 60 ± 0.2 Hz. The control block diagram shown in Fig. 9 was used for the frequency stabilizations. If both ESMES1 and ESMES2 are in the range of 0 pu to 1 pu, the control is active (0); otherwise, it is controlled (1). If control is one, the DC/DC chopper does not charge or discharge energy to the SMES.

When the control is zero, the output power of WPGS (Ps) is fed to a low-pass filter and then compared with output power of the back-to-back converter (Pg) to control the duty of the DC/DC chopper.

The controller provides the switching control signal for the DC/DC chopper. Fig. 10 reports the wind speed pattern and grid frequency variations without the SMES system. The frequency of the model power system exceeds the regulations limit of 60 ± 0.2 Hz. As shown in Fig. 11, the output power of the PMSG type WPGS in combination with the HTS SMES fluctuates much less than that of the general PMSG type WPGS under the same wind speed. The results in Fig. 12 verify that the grid frequency is maintained in the range of 59.8 Hz to 60.2 Hz when the SMES is applied. 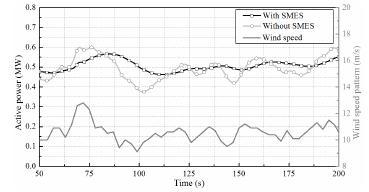 Fig. 11.Comparison results of feeding active power to the grid of WPGS in the cases with and without the HTS SMES 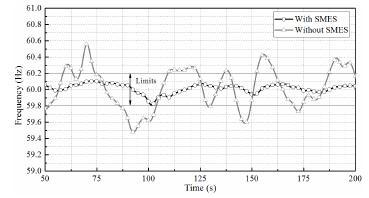 Fig. 12.Grid frequency when the SMES is applied

This paper dealt with the frequency stabilization of the Ulleung Island power network by an effective control scheme of the back-to-back converter with shunt-connected HTS SMES. For these purposes, a control system including the adaptive controller of the grid-side converter was designed and applied to the back-to-back and DC-DC converters. From the simulation results, it can clearly be concluded that the proposed system properly regulates the frequency within the regulation limits. Compared to the general configurations of SMES system, the back-to-back converter with shunt-connected SMES can save one converter and also reduce the power losses of converter system. Hence, the proposed system is cost-effective in comparison with the general WPGS and SMES system.