In island and backcountry areas, electrical power is usually supplied by diesel generators. It is difficult for small scale diesel generators to have an economy of scale owing to the usage of fossil fuels to produce electricity. Also, there is a problem of carbon dioxide emissions that brings some environmental pollution to the entire region of the area. For solving those, this paper proposes a design method of autonomous micro-grid to minimize the fossil fuels of diesel generator, which is composed of diesel generator, wind turbine, battery energy storage system and photovoltaic generation system. The proposed method was verified through computer simulation and micro-grid operation system.

Micro-grid or Hybrid generation system has been considered as a countermeasure for electricity power supply in island and backcountry areas. In this regard, the paper proposed to date are references [1-5], as in ESS (Energy Storage System), photovoltaic generator, DFIG (Doubly-Fed Induction Generator), and PMSG(Permanent-Magnet Synchronous Generator) adopted in various forms. However, the most of hybrid system is actually installed and operated as a wind-diesel-hybrid power generation system.

On the other hand, such a hybrid power generation system is configured in DC link type and AC link type. The DC link type is relatively simple and the cost is low, but the efficiency is low and the DC voltage level affects the entire system. The AC link type has many control elements and relatively difficulties to control systems owing to the difference of voltage phase and magnitude between them. But the efficiency is higher and the development of control techniques is carried out.

In most current hybrid generation systems, diesel generators control the hybrid system voltage and frequency to keep constant and ESS supports the role of the frequency adjustment. But in this case the diesel generator with CVCF function has greater capacity and fuel consumption. [9-11]

This paper presents a method of solving this by BESS with some coordination rules which the frequency and voltage maintains to be constant and photovoltaic and wind generators work to maximize its output. As a result, the fuel consumption of a diesel generator can be minimized through its emergency operation in spite of changes in the weather and wind speed.

At first, we consider a AC bus type of micro-grid which consists of BESS, diesel generators, photovoltaic and wind generators. And then, a coordination rule of the hybrid generation system is proposed under considering the charging state of BESS. The operation rule is applied to the micro-grid design in Jeju Gapa island through modeling and simulation by PSCAD / EMTDC software package. The result is compared with the operation data of the micro-grid.

2. Structure and Coordination Rule of Micro-grid

The structure of the micro-grid with BESS, two diesel generators, photovoltaic generator, and Squirrel-Cage Induction Generator (SCIG) with wind turbine is shown in Fig. 1. 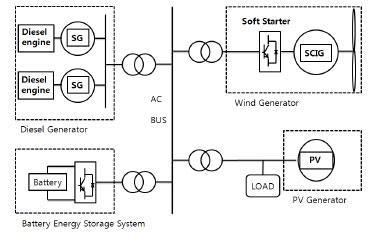 In hybrid power generation system such as micro-grid, a coordination rule for reliable power supply and minimum operation cost is essential. That is, photovoltaic and wind power generators according to weather changes produce maximum power; BESS performs the CVCF function under proper state of charge(SOC); diesel generator works based on the SOC such as repair or abnormal charging state of BESS.

The decision of the operation range of BESS is very important. Because the instantaneous charging and discharging kW output is different according to the SOC of battery. This gives an impact on the proper operation and the life cycle of BESS in micro-grid. Depending on battery manufacturers and specifications, the SOC value enough to produce the rated kW charging or discharging output of BESS is suggested from 20-30% as minimum to 70-80% as maximum.

This paper proposes a coordination rule for hybrid power generation system considering the SOC of BESS as shown in Fig. 2. 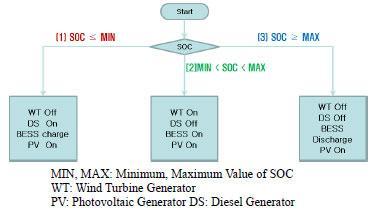 The operation method is divided into three categories according to the SOC of BESS as follows.

In normal state defined as SOC is between MIN and MAX, BESS operates in CVCF mode; WT and PV in MPPT(Maximum Power Tracking Point) mode. Then, changes in the load and the output of WT and PV are compensated. by the CVCF operation of BESS.

In state of SOC under MIN, DS operates in synchronous connection to the hybrid power system in droop operation mode and supplies electric power to loads and charges BESS. Then, BESS still operates in CVCF mode; fixed speed WT is off for stable charging of BESS; variable speed WT is on; Small size of PV can be on.

3. Design and Modeling of Micro-grid

As design and modeling target, the micro-grid of Jeju Gapa island is considered. The Gapa island is in 5.5km away from the land and has been supplied power by diesel generators since 1995. Jeju special self-governing province plans to build a carbon free island in entire Jeju region by 2030. Accordingly, Gapa island was selected as target area of micro-grid pilot project and power supply technique using only renewable energy such as PV, WT, and ESS without diesel generation. Design and modeling method is described in the following.

Gapa island is a small island of 0.85㎢ and 281 people, 193 customers live there. Tourism, agriculture, fisheries processing is the main industry. Power supply facility consists of diesel generators and distribution facility as shown in Table 1. 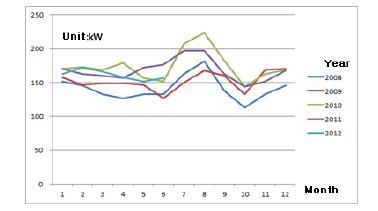 As a characteristic of the islands, peak power appears at 13:00 in the daytime and at 21:00 at night, and monthly peak power of distribution facility appears in August every year.

The specification of existing diesel generator is three phase 380V 150 kW. The parameters of DG are modeled by values provided by PSCAD/EMTDC software package. But the exciter and governor are used with generalized controller. [12]

As a device to convert AC to DC and vice versa, back-to-back PCS is considered for CVCF operation. It uses IGBT device and PWM switching is applied. The specification is three phase 220V 350kVA. The CVCF controller is used as simplified model in Fig. 6. 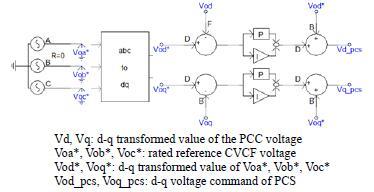 3kW photovoltaic generation modules were installed for 21 households at their roofs. The PV generator is modeled as simplified current controller shown in Fig. 7. 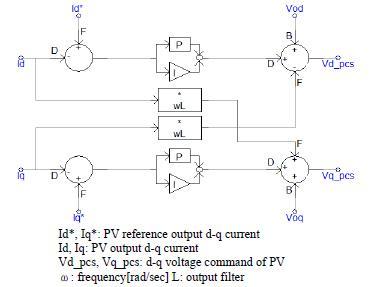 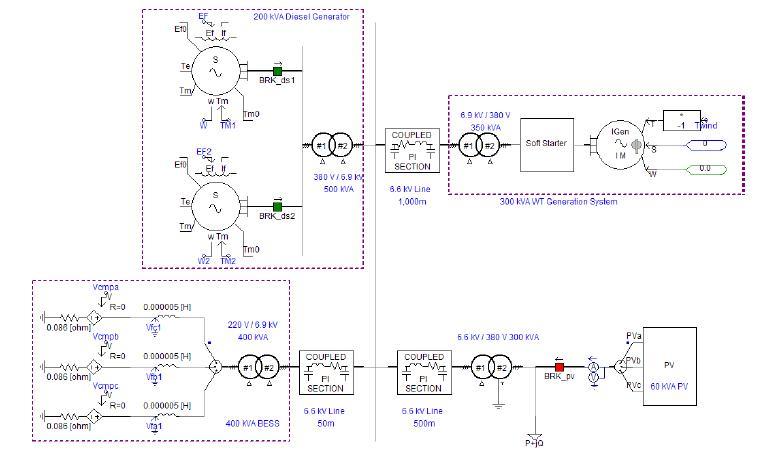 The simulation scenario was considered so sufficiently that the proposed cooperation operation rule can be applied to all operation states. At 0 second, BESS with CVCF mode operates in the normal state (2) of MIN

The scenario during 0 second to 120 second is as follows:

The simulation results for the scenario from 0 to 120 second is shown as follows: 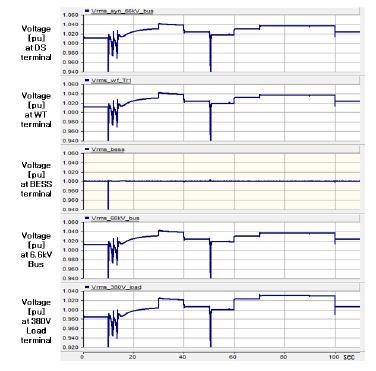 Fig. 9.Voltage variations at each terminal 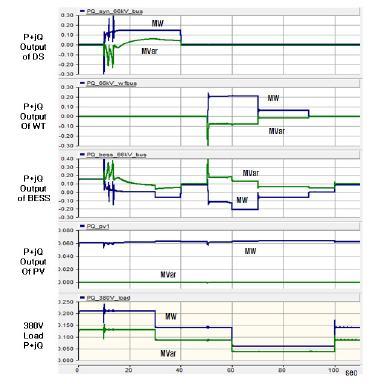 Fig. 10.Real and reactive power variations at each terminal

Fig. 11 shows the frequency variations at each terminal. The abrupt frequency change at 50 sec. occurred owing to WT start operating. But the frequency maintains within ±1%. 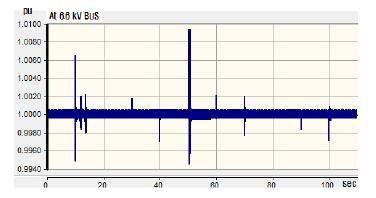 When considering the simulation results for the proposed coordination rule applied to all possible situations, voltage and frequency variations maintains very well within the domestic permissible voltage range ±6% and frequency range ±1%. But the severe voltage change owing to start operating of WT such as the fixed speed type should be noted. On the other hand, it is necessary to monitor and manage the SOC of BESS. Because that is critical to operate the micro-grid with high reliability, carbon-free and fossil fuel minimization.

Therefore, control center is installed to integrated management of micro-grid component and it is composed to collect data and manage by connecting all systems.

For operator’s convenience, it is made that generation and load information can be confirmed at the same time.

For generation information, each generation power’s status is displayed, and the SOC of BESS is presented as numerical value. In addition, communication status of each device as well load sharing by distribution line and power quality is presented by color, so it is easy to recognize.

We monitor production/supply power of WT, PV, DS in a week, and confirm output change of frequency, voltage and total generation power statics. 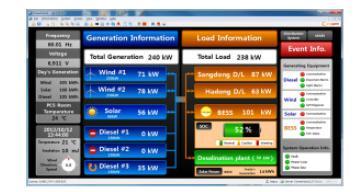 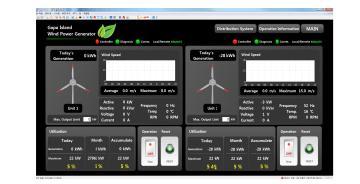 Micro-grid provides daily results of monitoring of ESS’s charging status, voltage and power of distribution lines and current of diesel generator to operator in order to monitor generating and distributing facility at once, and respond unexpected status.

Besides, we will connect EV charging system and water conversion facility to improve operation efficiency.

This paper proposes a design method of micro-grid with some coordination rules which the frequency and voltage maintains to be constant and photovoltaic and wind generators work to maximize its output. The proposed operation rule is applied to target model, namely Gapa island micro-grid. Through simulation results for scenario considering the coordination rule applied to all possible situation, voltage and frequency variations maintains very well within the domestic permissible voltage range ±6% and frequency range ±1%. But the severe voltage change owing to start operating of WT such as the fixed speed type should be noted. On the other hand, it is necessary to monitor and manage the SOC of BESS. Because that is critical to operate the micro-grid with high reliability, carbon-free and fossil fuel minimization.

As a result, the fuel consumption of a diesel generator could be minimized through its emergency operation in spite of changes in the weather and wind speed.