The control method for stand-alone DC micro-grid is divided into two groups. One is a real-time direct control according to the operation mode, in which the generated, stored, and consumed power are measured and transmitted to the main controller through high-speed communication link [4-6]. This method can offer highly safe operation for the micro-grid if a fast data transmission between the main controller and the local controllers is possible.

Another method is an autonomous control without communication link, in which the converter output voltage is regulated using droop control [7-10]. This method improves the performance degradation due to the circulating current among the connected converters. However, it brings about rather high transients and slow dynamic response in regulation process.

Fig. 1 shows the configuration of stand-alone DC microgrid, which is composed of uncontrollable power sources like a WP (wind power) generator and PV (photo-voltaic) generator, controllable power source like an engine generator and BES (battery energy storage), and load. It also has a monitoring system to supervise whole system operation through communication link. Each converter has a local controller to manage the operation of each source, BES, and load. 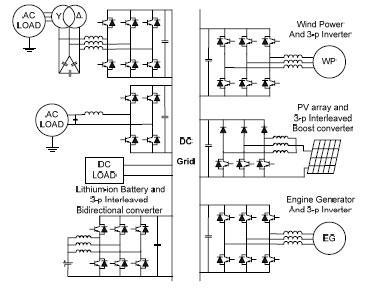 In this paper a feedback loop was added to adjust the droop voltage, in which the DC current IBES_OUT is measured and multiplied by the virtual resistance RV to reduce the reference DC droop voltage.

Therefore, the reference DC voltage can be adjusted by this feedback loop without inserting resistance.

The virtual resistance can be derived considering the tolerable voltage variation as the following equation.

Where, the Vmin is the minimum DC grid voltage and the PRate is the rated converter capacity. 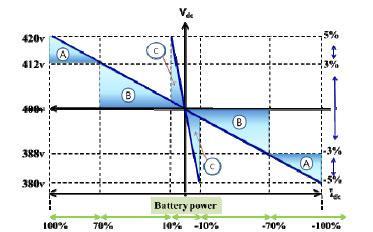 Region B is located in the DC grid voltage with tolerance of +3~+3%. In this region the battery operates at 70% of rated power. The virtual resistance at this region is obtained from Eq. (3).

Region C is defined as a protection zone for over charge and over discharge. In this region, the converter reduces the charging or discharging power immediately to protect the battery. The handling power is about 10% rated power and the virtual resistance at this region is obtained from Eq. (4).

The EG operation scheme is described in Fig. 4, in which the EG output power is autonomously controlled according to the voltage variation of DC grid. If the output power of PV and WP is smaller than the power demand in load, the BES discharges power to maintain the power balance in the DC grid. 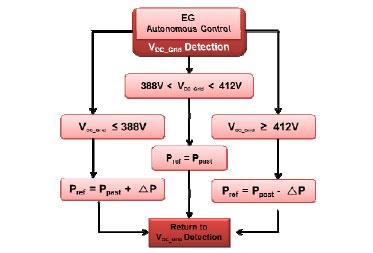 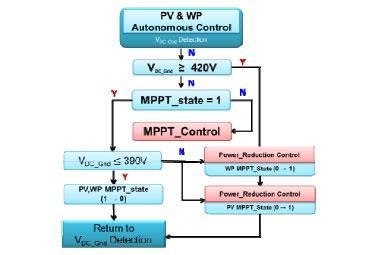 Since the output power of PV or WP changes continuously according to the weather condition, PV or WP operates in MPPT mode. If the voltage variation of DC grid overreaches at +5%, it can brings about stability problem in the DC grid. And it overcharges the BES to make shortening the battery life.

The operation sequence for BES is shown in Fig. 6. When the battery SOC is between 20% and 80%, powerbalancing control is selected for droop control. Depending on the variation of DC grid voltage, region A, B, C are selected. 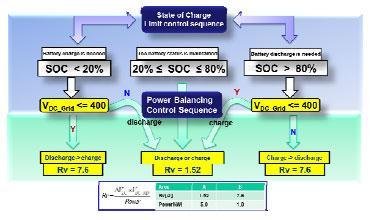 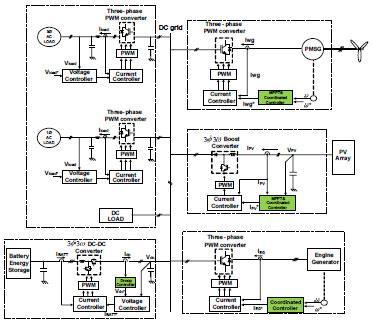 EG controller also consists of outer speed control and inner current control. BES controller consists of current control and DC voltage control. Depending on the sign of current value, charging or discharging operation is carried out [13, 14]. Three kinds of load can be connected to the DC micro-grid, which are a DC load, 1-phase load, and 3- phase load.

For the purpose of verifying the coordinated droop control, various simulations were carried out using the PSCAD/EMTDC software. The power circuit and the PWM converter were modeled with the built-in model, where as the PV and WP generators with controllers are implemented with a user-defined model coded in C language.

However, As (Ampere-sec) was used in simulation because Ah is too large to represent the battery capacity in the simulation time of a few ten sec. Table 1 shows the simulation parameter of each component in the stand-alone DC micro-grid.

Table 1.Simulation parameters of each component in stand-alone dc micro-grid. 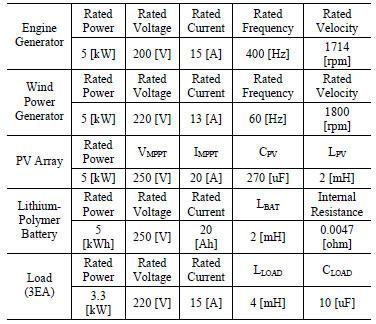 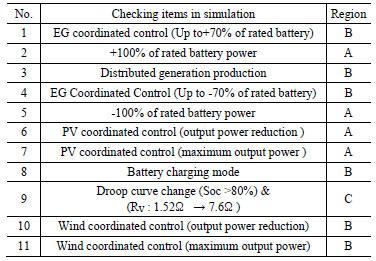 Fig. 8 shows the simulation results for the coordinated droop control. The 1st, 2nd, 3rd, 4th, 5th graphs show the load power, WP power, PV power, EG power, and BES power respectively. The 6th, 7th, 8th graphs show the DC grid voltage, virtual resistance, and SOC. It is assumed that the load power changes from 0 to 10kW, and the PV and WP powers change from 0 to 5kW so that all the operation regions can be involved. 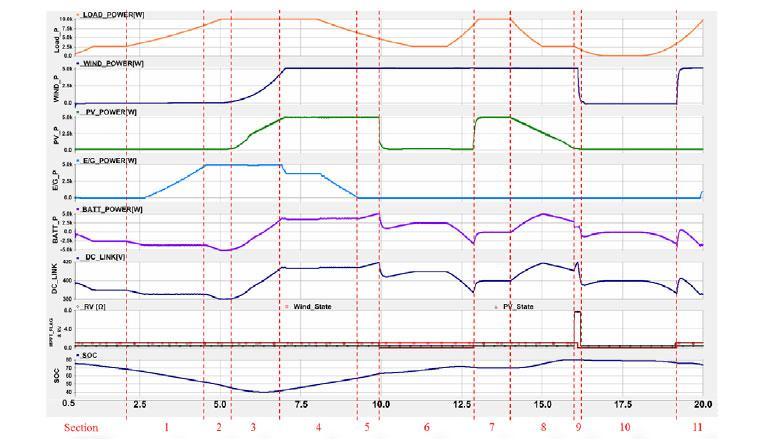 In section 1, both PV and WP power were set at 0kW and the load power slowly increased up to 8.5kW in order to make the droop control operates in region B. The BES primarily supplies the load power of 3.5kW with 70% portion and the remaining power from 3.5 to 8.5kW is supplied from the EG. Through these graphs the coordinated control of EG can be verified.

In section 2, the load power increased from 8.5 to 10kW and the operation region of droop control changed from B to A. Since the EG already supplies 5kW power to the load, more required power in load should be supplied from the BES. So, the BES changes the load sharing portion from 70% to 100%.

In section 3 and 4, both PV and WP power were increased from 0 to 5kW and the load power decreased from 10 to 6.5kW. The operation mode of BES changes from discharging to charging. The output power of EG is reduced from 5 to 0kW through coordinated control. The BES is protected from the over-discharge and the operation region changes from A to B.

In section 6, the load power is decreased down to 2.5kw and increased up to 8kW. When the DC grid voltage reaches at 419V, the PV power is removed to suppress the rise of DC grid voltage.

In section 8 and 9, the PV and WP power is larger than the load power and the BES is slowly charged. When the SOC of battery reaches at the maximum value of 80%, the virtual resistance Rv is changed from 1.52Ω to 7.6Ω. The operation region changes from B to C and the sharing portion of BES is changed from 70% to 10%. So, it is verified that the SOC limit is properly managed.

In section 10 and 11, the power balance can be maintained by reducing the PV, WP, EG powers and managing the SOC limit. AS the load power increases, the WP is restarted when the DC grid voltage reaches at 390V.

Using all the graphs shown in Fig. 8, the checking items described in Table 2 are verified. It is known that the coordinated droop control described in this paper works properly in three operation regions. 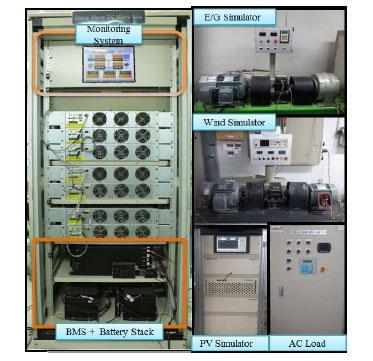 The experimental data of integrated operation test are displayed on the 16-channel oscilloscope. Each converter sub-assembly is mounted on the small iron drawer. DC bus is installed on the back side of DC micro-grid assembly, in which all the output terminal of DGs, BES, and DC load are connected together.

The wind power simulator and the PV simulator can produce arbitrary output power according to the wind speed and the irradiation. The BES has a BMS (battery management system) which provides SOC data through CAN communication. A touch-screen monitor was mounted in front of the hardware so that all the output powers from the PV, WP, BES, Load and the operation state can be monitored. RS-485 communication link was used for data transmission and gathering.

Fig. 10 shows the experimental results for the standalone DC micro-grid with applying the coordinated droop control. The basic assumptions for the experiment are exactly same as those for simulation. The only difference is the time scale for experiment. The maximum time scale used in the experiment is 200s, while the maximum time scale used in the simulation is 20s. All the measured graphs have almost identical shapes to those shown in the simulation. Using all the graphs shown in Fig. 11, the checking items described in Table 2 are verified experimentally. It is confirmed that the coordinated droop control described in this paper works properly in three operation regions.