This paper describes insulation design and its reliability evaluation of HVDC XLPE cable. Recently, the construction of HVDC transmission system, which is combined overhead line with underground cable, has been completed. This system is installed with existing 154 kV AC transmission line on the same tower. In this paper, the lightning transient analysis is firstly reviewed for selection of basic impulse insulation level and nominal insulation thickness. Then the electrical performance tests including load cycle test and superimposed impulse test based on CIGRE TB 496 are performed to evaluate the reliability of newly designed HVDC cable. There is no breakdown for HVDC XLPE cable during electrical performance test. Finally, this system is installed in Jeju island based on successful electrical performance test (Type test). After installation tests are also successfully completed.

HVDC is a preferred technology for transmitting large amount of power across long distance. HVDC results in overall higher efficiency and reliability than AC system transmitting the same amount of power. One of the biggest advantages of HVDC transmission is efficiency. HVDC transmission can supply more electricity with less power losses than AC system.

In previous papers [1-3], the lightning analysis and basic impulse insulation level were investigated including surge arrester type and capacity for ±80kV HVDC transmission line. Specially, the new DC cable with nano-composite XLPE insulation was developed to improve improve the insulation efficiency as well as to decrease the impact on the space charge.

In this paper, firstly, the basic impulse level and insulation thickness are reviewed in detail based on the transient analysis results for ±80kV HVDC cables. Then, the performance tests including load cycle test and superimposed impulse test were performed based on CIGRE TB 496 [4] for evaluating the reliability of newly designed HVDC cable. Finally, the qualified cable was installed in HVDC test area in Jeju. The test after installation was also successfully completed in 2012. The final commissioning test of converter station is now in progress. 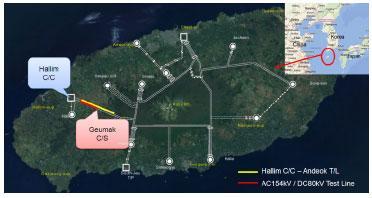 In previous papers [2-3], the surge arrester for ±80kV HVDC transmission line has been already selected by various lightning overvoltage analysis. The required maximum continuous operation voltage (MCOV) is 59.4 kVrms. Therefore, the surge arrester with the rated voltage of 78 kVrms and MCOV of 63.1 kVrms is selected for ±80kV HVDC transmission line. The nominal discharge current is also selected by10 kA based on IEC 60099-4[5]. These kinds of surge arrester have been installed at cable head (joint between overhead lines and underground cables) and converter station inlet.

In this paper, EMTP simulation is used for lightning analysis and insulation design of ±80kV HVDC cables. The EMTP model is illustrated in Fig. 4. Four story tower model and back flashover model are used for lightning analysis. The arching horns modeled by TACS and MODELS are also applied in this simulation model. The applied lightning current and waveform are 80 kA and 2/70 ㎲. This lightning surge strikes on grounding wire of HVDC overhead transmission line section at 1 km from cable head. 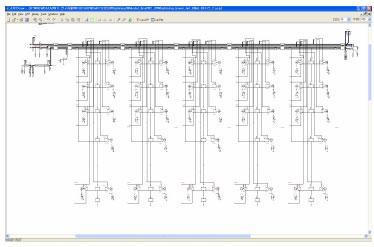 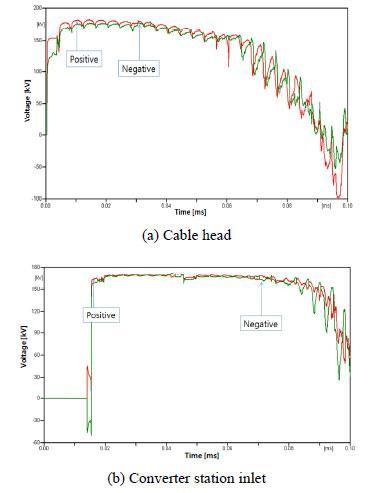 In this paper, DC voltage source is not considered for EMTP simulation because the calculation error is occurred by complicated impedance matrix. Therefore, for superimposed DC source, the Bahder’s coefficient is applied as expressed in Eq. (1) [6-8].

The maximum lightning overvoltage considering safety margin of 20% is 266.4 kV. From this result, the standard basic impulse insulation level of 325 kV for ± 80 kV nanocomposite HVDC XLPE cable can be finally selected.

The insulation thickness for ± 80 kV nano-composite HVDC XLPE cable is calculated considering impulse withstand voltage (Uimp) based on the standard basic impulse protection level (Ubil) of 325 kV and design stress for impulse voltage (ELimp). Eq. (3) shows the calculation for impulse withstand voltage and the minimum insulation thickness can be calculated by Eq. (4).

where Uimp is calculated impulse withstand voltage (kV), Ubil is standard basic impulse protection level, A is the tolerance of arrester protection level (recommended by CIGRE TB 189), K is Bahder’s coefficient, U0 is the DC rated voltage, K1 is the repetition deterioration coefficient, K2 is the temperature coefficient, and K3 is the overall safety factor for uncertainties.

where t is minimum insulation thickness (mm) and ELimp is the design stress for impulse voltage.

The electrical performance test (Type test) should be performed on test cable based on CIGRE TB 496 for evaluating the reliability of newly designed ±80kV HVDC XLPE cable [4]. Electrical performance tests are made before supplying on a general commercial basis of cable system in order to demonstrate satisfactory performance to meet the intended application. Once accessory with respect to materials, manufacturing process, design electrical stress levels, which might adversely change the performance characteristics [9]. 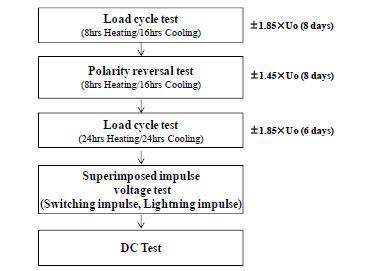 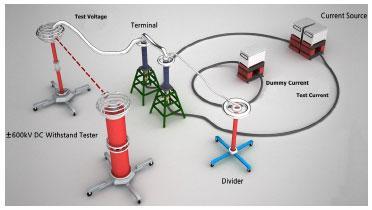 During all load cycle tests, there are no breakdown of ± 80 kV HVDC XLPE cable and interruption of testing. The load cycle test is successfully completed. Figs. 9 and Fig. 10show the results of polarity reversal cycle test and 2nd 48 hour heat cycle test. 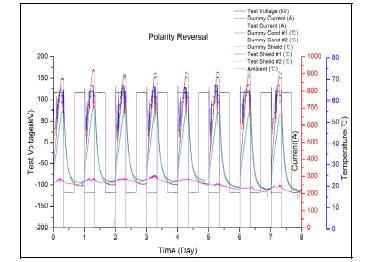 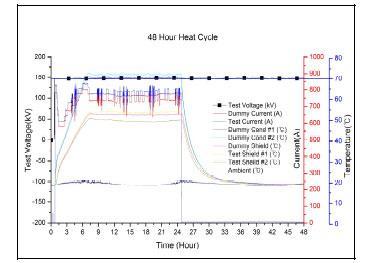 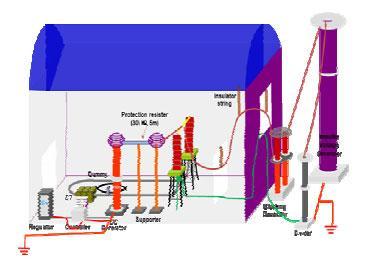 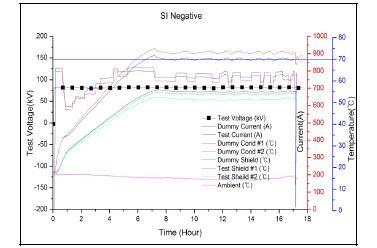 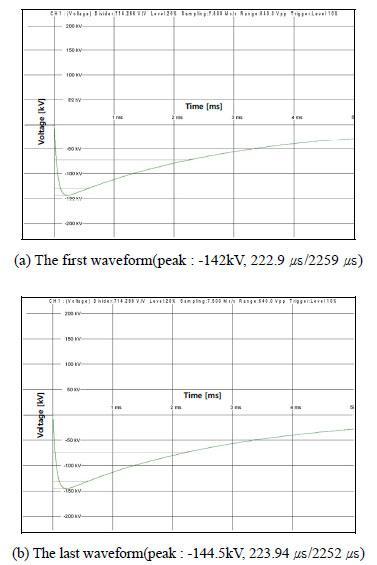 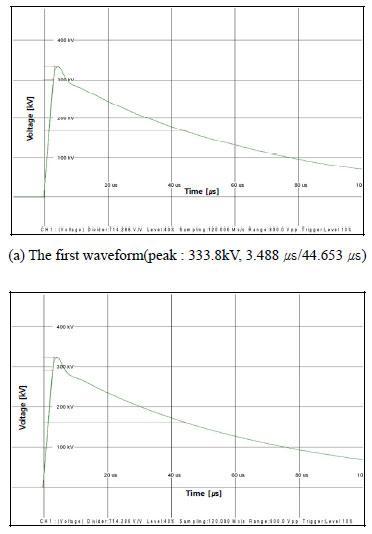 ± 80 kV HVDC XLPE cable is installed in Jeju island based on successful electrical performance test including load cycle tests and superimposed impulse voltage test. The construction has been already completed. After installation tests including DC withstand voltage test, nondestructive test and TDR (Time Domain Reflectrometer) test are also successfully completed. Fig. 15 shows a DC withstand voltage test of real HVDC cables in Jeju. Fig. 16 shows the TDR test results during after installation test. As shown in this figure, the inserted signal from cable head is reflected back from termination of converter station inlet. There is no abnormal signal between the first and the second reflections. The time difference between these two reflections is 5.37㎲. Therefore, the propagation velocity of real HVDC cables can be calculated as 186.2 m/㎲. This velocity can be applied for fault location when the fault occurs on this HVDC cable. 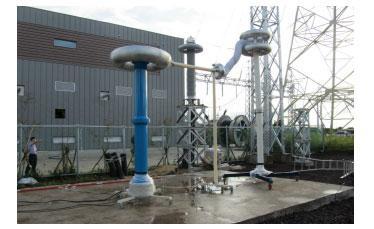 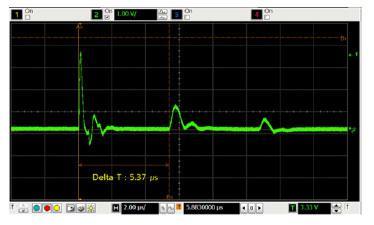 In this paper, the insulation design and its reliability evaluation of newly developed nano-composite ± 80kV HVDC XLPE cable is reviewed. The results are summarized as follows;