In this paper, the interference in small MIMO antennas having two identical composite right- and left-handed transmission-line(CRLH-TL)-based radiating elements is remarkably decreased. The radiating element has the broadside-capacitive coupling as well as slots to be equivalent to the CRLH-TL to prevent the size from increasing for an LTE high band. The suspended line bridging the two radiating elements is optimized to lower the interference between them down to -23 dB, while the overall MIMO antenna system is compact and its antenna performance is acceptable. The design is tested for 2.5 GHz.

Mobile communication has been common with a variety of hand-held devices. As an essential component to a portable wireless communication device, the antenna should be small enough to be mounted, and have the electrical functions compliant with the industrially standardized specifications. The planar inverted F-antenna (PIFA) and the modified monopole have been seen in most of the handset-antenna designs [1]. As the body of a mobile phone is highly populated with numerous circuitries and the space for the antenna is driven smaller and smaller, the two aforementioned kinds of antennas are facing the limitation in size-reduction and the degradation in performance, because they generate the resonant surface current for radiation on the condition of the quarter-wavelength-resonance TL with one end short-terminated. When more than one antenna are required to be mounted to take the benefit out of diversity, it is really difficult to put two PIFAs or two modified monopoles in a confined area, since a single antenna of those kinds occupies most of the space, and two nearby elements will interfere with each other badly [2].

The multi-input multi-output(MIMO) technology has been shed a light on to improve the quality of urban wireless communication in line with the purpose of diversity antenna. The MIMO system is equipped with multiple antennas, which do have a shorter distance between one and another. Nowadays, mobile phones start to be featured with multiple antennas as the MIMO devices with LTE services. Over the last decades, the design of mobile phones has had to control the specific absorption rate(SAR) with the desired levels of return loss, antenna gain, antenna efficiency, and far-field pattern at the specified frequency, which claims lots of work. Let alone, when the number of mounting antennas increases for the MIMO communication, the antenna design including the SAR reduction becomes much complicated, since the radiating elements have shorter distances in a limited area. To circumvent the problem, the radiating elements much smaller than the conventional antennas like PIFAs and meandered monopoles are needed. As an approach to the size-reduction of an antenna, small resonating structures can be designed based on metamaterial CRLH-TLs [3-8]. Though C. Caloz et al came up with a CRLH-TL unit cell extended to an elongated periodic geometry for the nonphase varying resonance as shown in [3], S. Yoo et al suggested very compact zeroth-order resonant (ZOR) MIMO antennas that are less than 2/3 times a single PIFA, clearly presented in [4]. A CRLH-TL-based radiating element shows that a smaller antenna can decrease the SAR with the antenna performances satisfied.

In this paper, the interference between small CRLH-TL-based MIMO antennas diminishes by a large margin. The radiating element consists of the broadside-capacitive coupling as well as slot coupling, and turns out small, compared to the PIFAs for 2.5 GHz as an LTE high band. The meandered suspended-line connecting the two radiating elements is optimized to reduce the interference between them down to −23 dB, while the overall MIMO antenna system is compact and its antenna performance is acceptable.

There are a number of compact antenna structures that are appropriate for closely placed radiating elements for a MIMO system. A PIFA can hardly be used as is, and it undergoes meandering, adding stubs, and loading lumped elements to be fit into an assigned space. Simply meandering a resonant path can degrade the electromagnetic radiation by causing destructive interference due to the opposite direction currents along the edges of the neighboring segments, though it is helpful to push the resonance frequency downward. This may happen to a structure with multiple stubs attached to a main current path. In practice, lumped elements such as chip inductors and chip capacitors are loaded to increase the wavelength, and they usually result in the decrement in the antenna gain due to the parasitic effect like the ESR, etc. Apart from the conventional techniques for size-reduction, a structure is designed inspired by the CRLH-TL that basically has core circuit-elements, in other words, series inductance and capacitance, and shunt inductance and capacitance. These circuit elements for one such antenna can be realized by the broadside-capacitive coupling for the shunt capacitance near the feed-line and series capacitance near the return current path on the metal ground in a handset antenna, while the shunt inductance mainly comes from the slot coupling and the series inductance results from the conduction current along the main and return current paths of the entire structure, as given in [5]. This antenna is flat and mountable on the handset device. However, if two from this kind of structure are placed on the main side of a MIMO system, it will highly likely have poor electrical and electromagnetic performances due to strong interference between the two radiating elements. Therefore, this paper deals with the design of the MIMO antennas having very weak correlation between the two CRLH-TL-based radiating geometries. First, the unit structure is shown with its CRLH circuit configuration [3-8].

The elements of the circuit in Fig. 1(a) can be mapped to the blocks in the top-view of the single antenna and they result in the dispersion daiagram of Fig. 1(b) where the zeroth order resonance can be generated at 2.4 GHz in the middle of the RH(Right-handed) and LH(Left-handed) regions as typical with CRLH-TL structures. The parallel plates as the broadside coupling play the role of CR1 and CR2 as shown in Fig. 1(c). Considering the flow of the conduction current from the feed-line through the return current path, on the metal ground, the stitch between CR1 and CR2 and the rim of the slot will act as LR and LL. The broadside coupling between CR2 and LL works as CL. Manipulating the geometrical parameters in Fig. 1(b) for CR1, CR2, LR, LL, and CL to have the resonance at 2.5 GHz, this single antenna comes to have the following frequency responses. 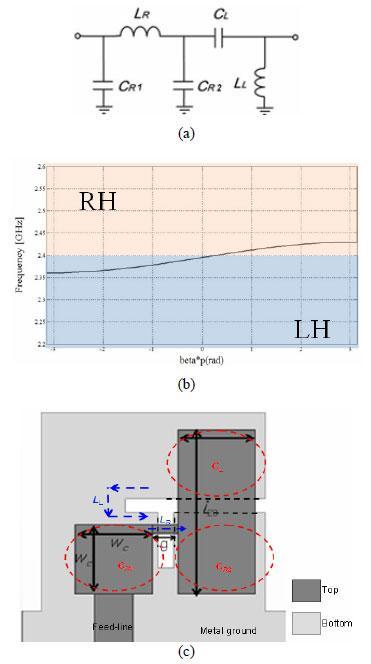 Fig. 1(b) is enlarged in Fig. 2(a) as the entire structure of this antenna. The top and bottom are printed on the 0.6 mm-thick FR4 substrate. In Fig. 2(b), the resonance occurs at 2.5 GHz with |S11|≈ −17 dB, as aimed. At this frequency, an omni-directional far-field pattern in the zx-plane is obtained in Fig. 2(c) with the efficiency of 61% and the gain of 1.6 dBi. The way the resonance of an antenna structure can convey the power wirelessly into the air as the radiation is described in the appendix. By far, it is has been talked about a single CRLH-TL antenna, and is applied to a multiple antenna system. The single antenna and its replica are placed closely in a symmetric manner for the MIMO case. 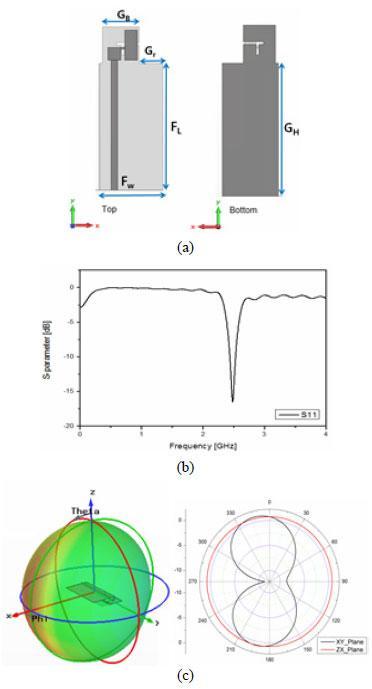 Fig. 2.Performances of the single antenna: (a) Geometry; (b) Return loss; (c) 3D and 2D Beam-patterns

The two radiating elements are 15 mm away in Fig. 3(a), and this put them in the area of interference. As a result, they interfere with |S21|＞−10 dB as a poor isolation in Fig. 3(b). To improve the isolation, the suspended line presented in Fig. 3(c) is suggested to disconnect the electromagnetic interaction between the two radiators, which is inspired by the high input impedance at the center as the magnetic wall into the line shorted at the metal area of the counterpart radiator as in Fig. 3(d) where the current from antenna 1 to antenna 2 becomes significantly decreased at the central line and the effect of the magnetic wall boundary is proven to be the same as a high impedance. The charaterisitcs of the suspended line are observed by the behavior of S21 as a function of the geometrical parameters(the number of U-shaped segments, the width, and others) with Figs. 3(e), (f), and (g), respectivley. The paramtric change is iterated, and ended, when the surface current at the center of the suspended line becomes the weakest as the magnetic-wall effect. This is the moment that S21 falls further away from −10 dB. As the optimal geometry, the isolation device with two 5 mm*4mm sized U-shapes with the distance of 3 mm between the two antennas is used as in Fig. 3(c), and the suppression of the interference is improved by 15 dB in Fig 3(h). The suspended line barely affects the radiation characteristics and the beam-pattern is achieved in Fig. 3(i) as the 3D and 2D radiated field patterns with the efficiency of 54% and the gain of 0.52 dBi . 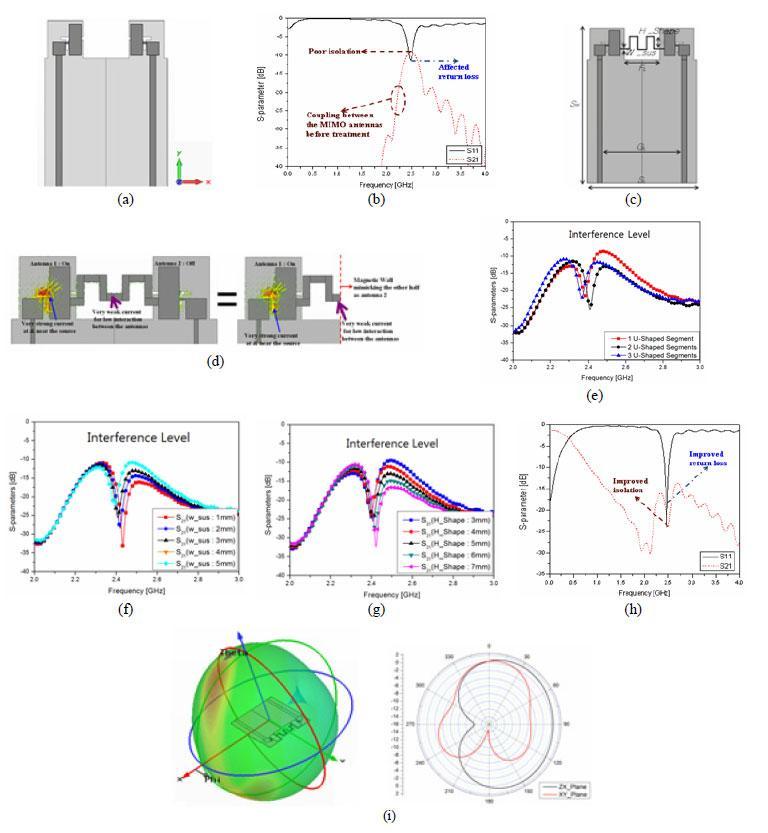 Fig. 3.Performances of the multiple antennas before and after an appropriate action is taken: (a) MIMO antennas without the isolation device; (b) Poor isolation; (c) MIMO antennas with the isolation device; (d) Verification of the low interference by the high impedance line equivalent to the magnetic wall; (e) S21 vs. Number of U-shaped segments; (f) S21 vs. the width; (g) S21 vs. the height; (h) Improved isolation and return loss; (i) +3D and 2D Beam-patterns

In this paper, the interference in small MIMO antennas having two identical composite right- and left-handed transmission-line(CRLH-TL)-based radiating elements was remarkably decreased. The radiating element has the broadside-capacitive coupling as well as slots to be equivalent to the CRLH-TL to prevent the size from increasing for an LTE high band centered at 2.5 GHz. The suspended line bridging the two radiating elements is optimized to lower the interference between them down to −23 dB along with the efficiency of 54% and the gain of 0.52 dBi, while the overall MIMO antenna system is compact and its antenna performance is acceptable.

In this section, the relationship between the resonance and radiation of an antenna is technically and pictorially described. First, a resonant device is called a resonator, and resonant antennas are modeled as resonators quite commonly. Resonance occurs when a device is excited by an external force and the injected energy is stored in the device and concentrated with little or no loss. Applying this to electrical circuits, the input impedance of a device should be mentioned. The input impedance of an electrical device is expressed as a complex value comprising the real term and imaginary term.