Whether power frequency magnetic fields generated by alternating current transmission lines have harmful biological and health effects on the human body or not is still debated within the scientific community, as well as among the general public. Several studies on in vivo, in vitro and epidemiology have been carried out to find evidence of a link between power frequency magnetic fields and cancer [1-7]. Most of the concern about transmission lines and cancer mainly stems from epidemiological studies of people living near transmission lines, and epidemiological studies of people working in “electrical occupations”. However, laboratory studies have little evidence linking power frequency magnetic fields and cancer. In these circumstances, the World Health Organization has maintained a precautionary principle, which states that when there are indications of possible adverse effects, although they remain uncertain, the risks from doing nothing may be far greater than the risks of taking action to control these exposures [8]. The precautionary principle shifts the burden of proof from those suspecting a risk to those who discount it. The WHO recommends that government and industry provide the public with safe and low cost ways to reduce exposures to electromagnetic fields, which includes power frequency magnetic field.

On the other hand, reference level of power frequency (60Hz) magnetic field has been set to 200uT based on the newly established scientific evidences in ICNIRP guidelines published in 2010 [9], However, Korean government has no intention of adjusting 83.3uT specified by law in 2006 to this new reference level in consideration of people’s concerns for the time being. Regardless of the current regulated magnetic field value, electric utility company has been trying to reduce magnetic field in the residential area in the vicinity of overhead power transmission lines to take into account of public concerns on the long-term effect of magnetic fields. In an effort to reduce magnetic field, engineering side has made considerable efforts to develop passive loop based, cost-effective mitigation technique of power frequency magnetic field almost for ten years. Up to now, the passive loop is considered as a response to the recommendation of the WHO to provide safe and low cost magnetic field reduction ways for the general public. In order to verify developed power frequency magnetic field mitigation technique based on passive loop, a horizontal type of passive loop was designed and installed for commercially operating 154kV overhead power transmission line for the first time in Korea.

Fig. 1 shows the hierarchical structure of the regulations of 60Hz electric and magnetic fields in Korea. The limit values of electric and magnetic fields are regulated in technical standards for electric facilities(60Hz) under the electric utility act and are 3.5kV/m and 83.3μT 1m above the ground respectively. Limit value of electric field was determined from experiments carried out in order to protect general public from damage due to capacitively induced fields in a person in the vicinity of a high-voltage power lines. Limit value of magnetic field was adopted from ICNIRP guidelines published in 1998 [10]. As mentioned in introduction, Korean government has no intention of adjusting 83.3uT to this new reference level in consideration of people’s concerns for the time being, although ICNIRP guidelines based on the newly established scientific evidences was published in 2010. Currently, overhead transmission line is the only electric facility which these limit values are applied to but discussion on inclusion of other electric facilities which have been installed in substations and distribution systems has commenced since 2012. Moreover there is no 60Hz electric and magnetic field regulations for worker in Korea. Recently, electromagnetic field regulations for worker have become hot issue in European Union because European Parliament adopted the proposed version of Directive and European Council adopted formally this Directive on June, 2013. This new Directive supersedes Directive 2004/40/EC - electromagnetic fields and waves, obliges employers to perform an EMF risk assessment for all workplaces including indirect effects, provides exposure limit values and action levels for non-thermal effects(refined version of ICNIRP’s recent ELF guidelines) and requires employer to provide safety measures, workers’ information and training, provision of health surveillance in relevant circumstances. The objective of this Directive is to lay down minimum requirements for the protection of workers from risks to their health and safety arising or likely to arise from exposure to electromagnetic fields during their work. It refers to the risks due to known short-term adverse effects in the human body caused by the circulation of induced currents and by energy absorption as well as by contact current; it does not address suggested long-term effects. It has been set in force on July 1, 2013 and transposition period for member states will end by July 1, 2016. One of the problems that make EMF regulations for workers be hot issue in EU is that there are no limit values for the workers who have implanted medical devices such as metallic prostheses, cardiac pacemakers, implanted defibrillators and cochlear implants. Korean experts related to EMF regulations have kept their eyes on EU’s EMF policies and have commenced discussion on 60Hz magnetic field regulations for worker in consideration of the movement of EU. In addition to EMF regulations for workers, regulations for long-term exposure to electro-magnetic fields have also been discussed due to consistent public concerns on the possibly carcinogenic effects of 60Hz magnetic fields on human health. However up to now, there are no guidelines based on the established scientific evidences to regulate long-term exposure to electro-magnetic fields. Due to this fact, most experts have agreed that arbitrarily chosen exposure levels should not be set to limit values. 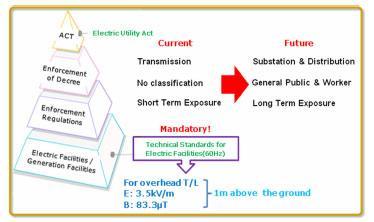 Fig. 1.Hierarchical structure of the regulations of 60Hz electric and magnetic fields in Korea

The magnetic field reduction principle of passive loop is based on well-known Faraday’s induction law [11]. In general, passive loop consists of conducting wire and capacitor bank which is connected in series with conducting wire. Capacitor bank consists of several capacitor units connected in parallel each other and is installed to compensate reactance of conducting wire. It should be note that resonance capacitance which makes the reactance part of passive loop become zero is not the optimal value for magnetic field reduction. It could be obtained by using passive loop design software developed by authors or by trial and error on site. 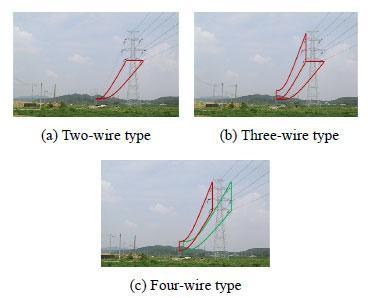 There are several considerations in the installation of passive loop. First, passive loop should be earthed to protect human from induced voltage in passive loop. Second, the compliance of electrical environmental characteristics such as audible noise, radio frequency interference and TV interference as well as electric and magnetic field with the design criteria of electric utility companies should be evaluated. Third, it should be reviewed that the mechanical strength of transmission tower is high enough to withstand the mechanical stress due to passive loop when passive loop is installed in existing overhead power transmission lines. Finally, the capacitance of compensation capacitor could be adjusted as small step as possible to increase in the efficiency of magnetic field reduction.

where HA and HB are the magnetic field intensities after and before passive loop installation, respectively.

To verify developed power frequency magnetic field mitigation technique based on passive loop, two-wire type of passive loop was installed for commercially operating 154 kV overhead transmission line with the transposed phase arrangement for the first time in Korea. Fig. 3 shows the configuration of 154kV overhead transmission line newly constructed to supply electric power to an industrial complex which has been being created. Compared with standard type of configuration, the minimum height of this transmission line is exceptionally high and the span is about 100m. Capacitance can be adjusted up to 34mF by 0.1mF. Two-wire type of passive loop was designed using passive loop design software developed by the authors. The design objective was to achieve magnetic field reduction factor up to 70% 1m above the ground within specified target area, given height, width and length of passive loop. Polyethylene cable which is commercially available and whose cross section area is 200 mm2 was employed as conducting wire for passive loop. Number of turns of passive loop and optimal capacitance for reactance compensation determined with design software were 3 and about 5.2mF, respectively. 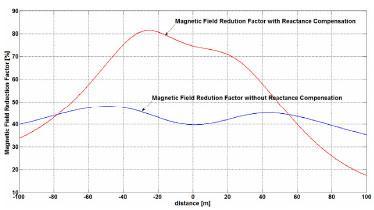 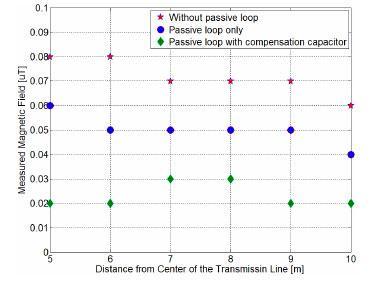 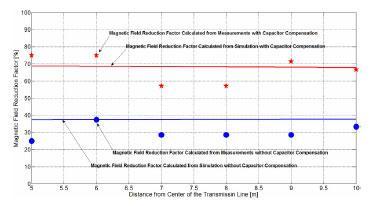 In this paper, first, the current status of 60Hz power frequency electric and magnetic field regulations in Korea was presented. Second, three types of passive loop for double-circuit power transmission lines were reviewed in terms of the feature of field reduction coverage. Third, passive loop installation considerations were discussed. Finally, we have installed a horizontal type of passive loop for commercially operating double-circuit 154kV overhead transmission lines with for the first time in Korea. In this case, achievable maximum magnetic field reduction factor was less than 50% without capacitor compensation. When compensation capacitor was inserted, achievable maximum magnetic field reduction factor was about 80%. Finally, electrical environmental effects of passive loop were assessed. According to the assessment results, it was found that electrical environmental compatibility could be met even after installation of passive loop. It has been confirmed from these field test results that passive loop could be commercially and cost-effectively utilized to mitigate power frequency magnetic field.