The polymer nano composite possess good priority recently for engineering applications. Especially the electrical insulating materials attract the high performance of nano composites. In this work the ballmill synthesiation process of nano sized Alumina (), the preparation of new nano composite material with an content of enamel and synthesized Alumina as 1wt%, 3wt% and 5wt%. Experimental investigation has been carried out for the prepared nano composites materials with respect to dielectric parameter measurements such as dielectric loss (tan ), dielectric constant (), dielectric strength under various temperature. The partial discharge level also measured for all the samples and the PD inception voltage is also observed and compared. Weight loss of the material has been analyzed through TGA. It has been experimentally proved that 3wt% of Alumina nano filler added enamel has significant improvement in the dielectric and thermal properties.

The electrical equipments from small power rating to hundreds of MW, consists different types of insulating and dielectric materials. The proper selection of insulating material depends upon various parameters such as dielectric strength, permittivity, arc resistance, thermal conductivity, thermal coefficient of expansion, chemical resistance against corrosion. Recently, the development of nano composite has more attraction towards electrical insulation. Polymer nanocomposites with small quantities of well dispersed nanoparticles offer advantage compare with conventional composites [1]. It is a cumbersome task to optimize the size and wt% of fillers [2]. Currently more research is going on the effectiveness of nanofillers. It has been already proved by many researchers that when the sizes of nano fillers are very less, the interaction zones are so large that they start to interact at very low level of loadings [3]. The interactions between polymer matrix and nanoparticles alter polymer chemistry, i. e. chain mobility, degree of cure and generate new trap centers in the composite which brings about the significant changes in electrical properties [4].

The insulating polymers have attracted wide interest as a method of enhancing, polymer properties and extending their utility [5-6]. The constituents of polymer composite are immiscible in turn produces a coarsely blended macro composite. This results in poor physical interaction between the organic and inorganic components [7]. The purpose of this work is to develop Alumina based new nanocomposite, that would be both resistant to electrical stress and exhibit a better thermal conductance, appropriate for copper wire coating which is used in electrical equipments.

In polymer nanocomposites, the interfacial region between nanoparticles and the matrix is high volume fraction because of the high surface to volume ration of the fillers. The previous studies aimed at providing an understanding of the charge storage and transport of an enamel containing ZrO2 nanoparticles [1]. It has been shown that nanometric fillers mitigate the interfacial polarization characteristic of enamel with a reduction in the internal field accumulation. The effectiveness of 1wt%, 3wt% and 5wt% of ZrO2 fillers addition with enamel are compared and proved that 1wt% of sample had better dielectric and thermal performance when compare to other samples [1]. Further in this investigation the dielectric and thermal properties has been obtained for the same base resin containing nano-fillers of Alumina.

The Alumina (Sigma Aldrich) is subjected to Scanning Electron Microscopy (SEM) for surface and structural property analysis as shown in Fig. 1, which ensures micro metric size. The nano sized Alumina has been synthesized using Ball Milling Machine (‘Attritor’) at a room temperature about 300C with 20 balls and the machine is operated for 42 hours at 300 rpm. The synthesized alumina has been characterized with the help of SEM as shown in Fig. 2. Then filtered nano filler Alumina with an average size of 50-80 nm is mixed with enamel in the concentration of 1wt%, 3wt% and 5wt% using conventional mechanical stirring for 90minutes at 30℃ and further mixing in an ultrasonic processor (Model: TPC 40) at 20 kHz. They were cast in moulds and fully cured. Three types of nanocomposite samples are prepared with the concentration of 1wt%, 3wt%, 5wt% of alumina respectively [1]. The samples are prepared in the size of 10 mm× 10 mm× 3 mm as per the methodology shown in Figs. 3 and 4. 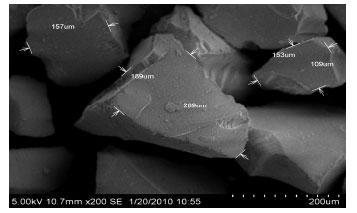 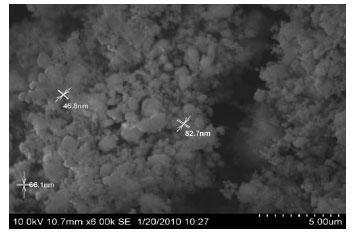 A standardized testing arrangement is used for the determination of the AC breakdown field strength of prepared samples as per IEC 60243 ˗ 1 [8].

Dielectric spectroscopy (Model : LCR HITESTER 3532-50) also known as Electrochemical Impedance Spectroscopy, is used here for the measurement of various parameters such as tan δ, Parallel capacitance (Cp), Series capacitance (Cs), Parallel resistance (Rp), Series resistance (Rs) as a function of frequency at 90℃, 120℃ and 180℃ temperature. This measurement is based on the interaction of an external field with the electric dipole moment of the sample.

The test is being carried out for frequency ranging between 50Hz to 5MHz at three different temperatures i.e., 90℃, 120℃ and 180℃, since the new nanocomposite is intended for coating of enamel wire which is used in an inverter fed motors, having very high switching frequency. From the parameters CP RP and dielectric constant (ε) could be determined using the following equations.

The time required for electronic and ionic polarization to set in is very short as compared to time for the voltage sign change even for the highest frequencies which find practical use in electrical and radio engineering [6]. When the frequency of alternating voltage increases, the value of ε remains invariable but beginning with a certain critical frequency when polarization fails to settle, ε begins to drop to lower value at very high frequencies [9].

Figs. 5(a)-(c) shows the permittivity of nanocomposite against frequency. It is observed that, the minimum permittivity is recorded for 3wt% Alumina added enamel independent of temperature. This is due to the fact that, addition of 3wt% Alumina nanofiller causes the electronic polarization, ionic polarization and the numbers of free dipoles present in the enamel to orient themselves. Hence the permittivity decreases, however, further increase in the wt% of Alumina nanofiller enhances the ionic displacement, intensifying the internal field and thereby reducing the electronic, orientation polarization. Thus resulting in higher permittivity [10-12]. 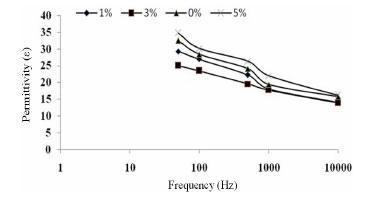 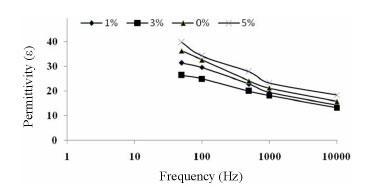 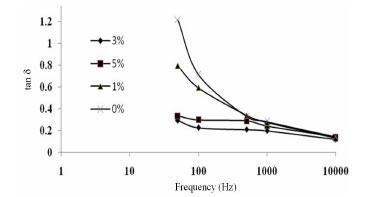 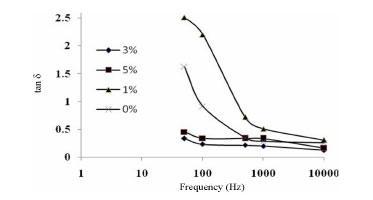 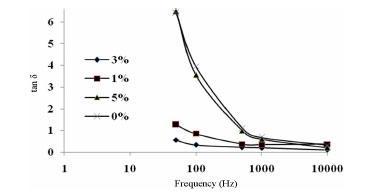 Figs. 7(a)-(c) show the influence of percentage of addition of alumina nano filler at different temperature such as 90℃, 120℃, and 180℃ on dielectric loss. In this study, an increase in the values of tan δ is obtained with addition of inorganic filler as a source of charge carriers [1]. In a polymeric system reduction of electrical conductivity can be created by the charge transport mechanism through various links and interaction zones [13]. It is observed from Figs. 7(a)-7(c), that 3 wt% Alumina added enamel has lower dielectric loss. Further it is noticed that, the temperature doesn’t have significant influence on tan δ for 3wt% Alumina added enamel, irrespective of frequencies. The rate of rise of dielectric loss is more above 120℃ except for 3 wt% Alumina added enamel. 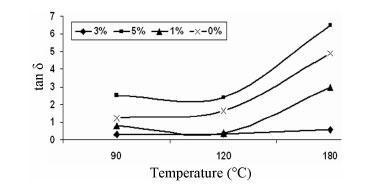 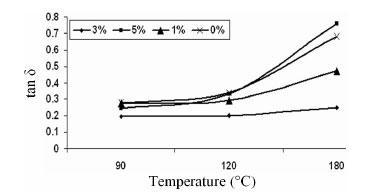 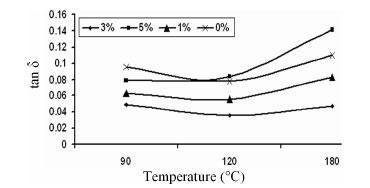 In this current work, PD characteristics in Alumina filler based nanocomposites and enamel are investigated as per the test procedure specified in IEC 60270, 2003. PD detector system (Model: Mess Wandler-Bau) is used in this experiment. The background noise of the shielded room is maintained at 1.0 pC. The measured data is recorded by a digital oscilloscope (Model: Agilent 54621A). The value of inception, extinction voltages are measured for all the samples using uniform field electrode configuration and tabulated in Table 2.

Normally PD will concentrate on the surface of nano fillers in a nanocomposite sample due to the difference in permittivity, but the nano fillers are more resistant to PD [14-16]. Also it is observed from the experiment that more concentration will increase interfacing zones, thereby reducing PD resistance.

Thermo Gravimetry (TG) is a simple material characterization technique, where the mass of a sample in a controlled atmosphere is recorded continuously as a function of temperature or time, as the temperature of the sample is increased (usually linearly with time). In this research, the Perkin Elmer STA 6000 Instrument is used for TGA and all the samples are taken for investigation with equal weight of 8mg each. The measurements are taken in an air atmosphere and the temperature is raised at a rate of 20℃/min from 38℃ up to 800℃. It maintained consistent heating rate and gas flow. The weight loss as a function of temperature was recorded with a sensitivity of 0.2mg and 1.5%accuracy. This instrument measures sampling purity, reaction rate, identification, activation energy and heat of reactions [1].

Fig. 8 shows that the percentage weight losses due to desorption of moisture or decomposition of enamel. It can be ascertained from the thermogram, the percentage weight loss does not show any significant changes with addition of nanofillers. Till 400°C the thermal stability of 5 wt% Alumina added enamel is high when compared to other samples. Further it is noticed from the DSC that, the Glass Transition Temperature (TG) value of 3wt% nano composite is increased by 6% compared to pure enamel. 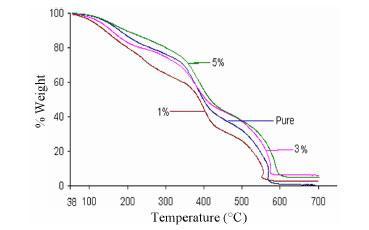 This paper exhibits that the addition of Alumina nano-filler with enamel is very effective, in improving the dielectric and thermal characteristics. A fine nano sized alumina is synthesized and dispersed uniformly with enamel. The nano fillers has more interface zone, in which the movement of charge is controlled by interfacial polarization, through that the dielectric and thermal properties of nano composite gains a significant improvement. The following observations have been made

In a continues AC voltage rising test 3wt% samplehad 35%higher insulation breakdown strength than other samples. Increasing the concentration of nano filler reduce the strength by the interfacial polarization effect. The dielectric loss of 3 wt% sample is lower compared to other samples. Further increase in concentration increases the dielectric loss. From the results of PD measurement it is observed that PD resistance was stronger for Nano composite than enamel. Especially the 3wt% nanocomposite offer higher PD resistance in compare with other nano composite. The increased concentration of nanofiller reduce the PD resistance.