Special purpose sensor design using MEMS (Micro-Electro-Mechanical Systems) technique is commonly used in Nondestructive Testing (NDT) research for the evaluation of existing structures and for the safety control and requirements. Various sensors and network have been developed for general infrastructures as well as safety-critical applications, e.g., aerospace, defense, and nuclear system, etc. In this paper, one of sensor technique using Fiber Bragg Gratings (FBG) and Finite Element Method (FEM) evaluation is discussed. The experimental setup and data collection technique is also demonstrated. The factors influencing test result and the advantages/limitations of this technique are also reviewed using various methods.

Using a specialized sensor and MEMS technology, a Structural Health Monitoring (SHM) technique is concerned with accurately and reliably assessing the integrity of a given structure in order to improve safety, increase operational lifetime, and reduce maintenance costs. SHM technology is used to monitor important structure which cannot be failed. A lot of SHM system have been deployed for monitoring real structure using a specialpurposed sensors, e.g., acoustic sensor, fiber sensor, gyro sensor, etc [1].

One of example, for a safety issue  a nuclear containment building contains a lot of containments and radiations which can adversely affect huge population if leaked out. Micro cracking and micro displacements in the structure can cause leakage and propagation of nuclear radiations. Therefore, pressure inside the containment building need to careful monitor so that it does not cross the threshold beyond the limit which these radiations get leaked. Therefore, there is a need that develops a monitoring system which continuous and automated fashion provides advance warning of structural faults and minimizes maintenance costs.

Using nano/MEMS technology, fiber sensors can be fabricated with other circuits and module. Also, sensors are promising sensing alternatives in SHM system and future smart structures. They exhibit several advantages such as electromagnetic interference (EMI) immunity, harsh condition immunity, lightweight, embeds ability, as compared with traditional sensors [2, 3]. Among vary optical based sensors; Fiber Bragg Grating (FBG) sensors are the leading technology because they have some more advantages such as linearity sensing, easily frequency multiplexed [2]. Moreover, for monitoring structure, FBGs can be attached to existed structure or embedded into new structure without any serious effect on the structure [3]. Consequently, FBGs are the most promising candidates to effectively replace conventional sensor for long-term monitoring applications in harsh circumstances.

In this paper, we propose a SHM technique using MEMS sensor associate with a Finite Element Method (FEM) model for monitoring nuclear containment building healthy. In the proposed technique, sensors gather monitored structure information at some special points and the FEM model analyzes overall strength of the nuclear containment building. Field applications to the concrete member in nuclear power plant containment structure were performed to demonstrate the operation of FBG sensor. In addition, static analysis of FEM model shows the reality of our proposed system.

The rest of the paper is organized as following. In section 2, the real structural health monitoring system is introduced. In section 3, we present characteristics of sensors and sensor interrogator. In section 4, we present the FEM model of the nuclear containing building in our research. The model analysis is presented in section 5. The last section is the conclusion and some discussions.

The main objectives of SHM system for nuclear containment building include:

By using the SHM system to continuously monitor nuclear containment building, the overall condition of the building can be evaluated at any point in time. SHM system can provide the required information to predict building deterioration over time, and thus, provide an opportunity to predict the remaining life of a structure. Moreover, the long-term performance of several typical fatigue sensitive details is being evaluated [4].

The strength of a building can be reflected by many operation factors. Some main parameters for assessment of nuclear containing building are determined as shown in Table 1. Some parameters can be monitored directly by sensors whereas the others can be derived from FEM model. In the first phase of our research, the interested parameters are strain and temperature [5].

These sensed values are collected by a sensor interrogator system. With a small FBG interrogator as discussed above, it can only gather information from maximum 40 FGB sensors. However, the number of sensor used for monitoring nuclear containment building is very large [8, 9]. A more complex interrogator system must be used. The multiplexed sensor technique should combine both wavelength multiplexed and time multiplexed.

Then these data are processed to extract the features. The features may be stored for using in the future. The features, new and stored features, are used in the FEM models analysis to calculate current healthy state of the monitored structure.

In this section, a FBG is an optical fiber grating that can reflect a special wavelength but transmit all others of light. If a broadband light is transmitted over FBG, a narrow band component around bragg grating frequency will be reflected while this component is missed in transmitted signal. The wavelength of the grating is specified by Eq. (1) [2, 10].

where λB is the reflex wavelength, η is the effective core index of fiber, and Γ is the grating pitch of the bragg grating.

If temperature is constant, the strain bragg wavelength shift effect is [2]

In case strain is constant, the temperature bragg wavelength shift effect is [2]

Fig. 3 is a captured picture of interrogator system. It shows the reflection wavelength of two channels where each channel includes ten FBG sensors. The system can measure four channels concurrently [12]. 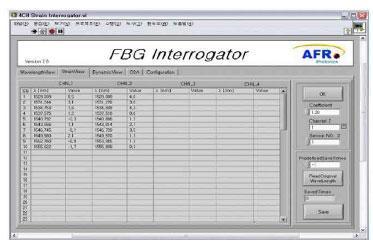 A traditional and reliable method measure strain is using strain gage. Strain gage is only suitable for applications that have a small number of sensing point because it is not easy to multiplex as FBG sensor. We make a structure that can change curvature, and then use FBG sensor and strain gage to measure strain of the structure [13, 14]. 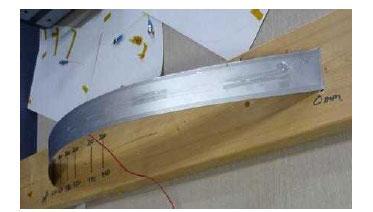 Fig. 4.Curvature experiment for checking the feasibility of FBG sensor 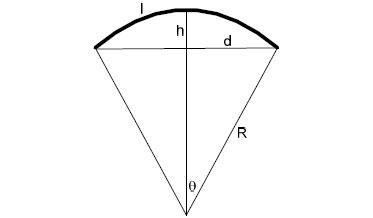 Fig. 5.Calculating the radius of the beam

The second method called measuring method measure the real values in experiment condition. We measure the distance d and the height h of the curvature. The radius can be calculated by Pythagorean’s theorem as Eq. (5)

Altering the Eq. (5), we have the equivalent Eq. (6) for calculating the radius

Table 2 is the radius result with different distance d from two methods. The results show that the curvature is made near a perfect curvature.

With different radius, the strains values of sensor are equal the strain gage. This experiment proves that the sensor can be used to measure strain for curvature structure which has small radius.

With this new defined system characteristic, FEM is a technique for analyzing the behavior of structures under variety of loads. In FEM, structure is first divided into a large of small blocks called elements. Elements can be different size and different properties depending on its position in the structure. Some element’s status is monitored by sensors. An analysis model is used to combine the status of elements form the status of the entire structure. FEM analysis can be used to simulate the entire construction process and it assures an adequate design margin of safety at all stages. These may be static or dynamic, and the structural responses may be linear or non-linear, with varying degrees of complexity.

This method was researched for a long time. Its theory is well known and a lot of software tools are also well established. The only drawback of this method is that it requires a high computation which cannot be used for large structure in the past. Recently, developments in computer capability made it possible to perform complex nonlinear FEM on an entire structure overnight on a desktop machine. Consequently, this method is suitable for the SHM system that monitors containment building. 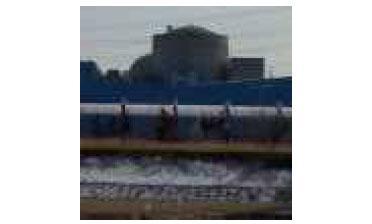 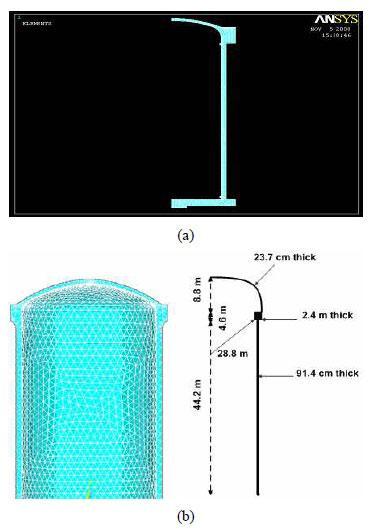 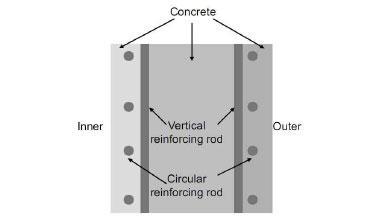 The equipment hatch area is model and evaluated its contribution to the buildings overall state of stress. Then, the whole model is built by rotating this sharp around the y-axis. The outer side of the geometric mesh FEM model of this building is shown in Fig. 7(b). The model use exactly the shape of Uljin #3, 4 nuclear power plant, however, as said before it can be parameterized to model other nuclear power plant which have the same shape with Uljin #3, 4 [20].

Due to the limited access to the Nuclear Power Plant, we cannot perform measuring at the real containment building at this time. We perform measuring in other real facility to check the operation of FBG sensors in real operation condition. Secondly, the FEM model is used to analyze strain and temperature of containment building in static condition. These analysis results can be used for dynamic analysis in SHM system.

The materials properties of the containment building must be specified for analyzing with FEM model. In our model, all the elements of the FEM model are set the same material properties. For simply in strain analysis, however, we do not consider the internal structure of the containment building shield. We assume the material is identical and only concrete with modulus of elasticity and Poisson’s ratio is shown in Table 3. In temperature analysis, we concern the internal structure of concrete. It includes concrete and reinforcing rode. The thermal material properties of these materials in our FEM model are shown in Table 2 [21]. 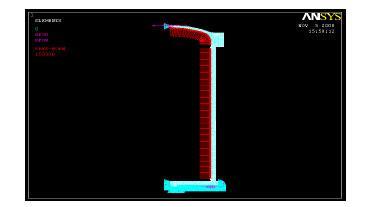 The strain analysis result of containment building is shown in Fig. 10.

The analysis result show the strain of the shield by different color with the blue is the lowest strain and the red is the highest strain. The analysis result show that the maximum strain location (red part) is from 14.2m to 15.5m from the ground. The value of strain is shown in Table 4. At these positions, the pressure they must be born is highest and they are most dangerous points

In this paper, we discussed a SHM system design using MEMS technology and FEM model analysis. Specialized sensors which have many advantages such as accuracy, linearity, easy deployment, easy multiplexing, Electromagnetic immunity, harsh environment immunity, etc, are very suitable for SHM system which requires a lot of sensors operating for a long time in harsh environment. In many methods for estimating the health of structure, FEM model gives precise results and total state of all structure.

Our new proposed system was deployed to monitor strength of a nuclear containment building for safety requirement. The simulation result as well the field experiment shown that this system is reliable. In the next research, the real measuring at nuclear containment building is performed. These measured results are used to adjust FEM model. Then, this system will be checked for the long-term reliable operation for safety control.