The electric motor is equipped into an Autonomous Underwater Vehicle (AUV) as the torpedo propulsion system and it requires high power for short time and high power density with respect of size and weight due to onboard spatial limitation. Among of various types of electric motors, brushless dc (BLDC) motors is regarded as a good candidate for the propulsion system of an AUV due to their high efficiency, high power density, high torque, easy to control, and lower maintenance.

A BLDC motor with higher number of phase has several advantages, compared with the conventional 3-phase one such that it can reduce torque ripple and stator current per phase without increasing voltage and also can increase torque-per-ampere ratio for the same volume, reliability, and power density. In special, for the military application, a motor can be still operated under the malfunction, such as failure condition of one of motor phases, so that it can insure survivability for the system.

Fig. 1.Prototype of 7-phase BLDC motor for a small-sized AUV

Also different control strategies have been considered for improving the performance of BLDC motors for application in AUV. The PI, the PID controller and the hysteresis current control have been the most widely used control techniques for controlling a BLDC motor. However, the main drawback is the linear nature of classical PID controller that lacks robustness when facing an operation scenario, where parameter variations and disturbances are added to the nominal model [5].

In order to obtain an acceptable dynamic response over the whole operation range, Fuzzy control drive system is attempted in this paper.

The BLDC motor has a permanent-magnet rotor and the stator windings are wounded such that the back electromotive force is trapezoidal. The trapezoidal back EMF implies that the mutual inductance between the stator and rotor is nonsinusoidal. Therefore, no particular advantage exists in transforming the machine equations into the well-known two-axis equations, which is done in the case of machines with sinusoidal back EMF’s [6].

The 7-phase currents are controlled to take a type of quasi-square waveform in order to synchronize with the trapezoidal back EMF to produce the constant torque. This task is performed by the speed/torque control loop in cooperation with the rotor position sensor and current controller as shown in Fig. 2. 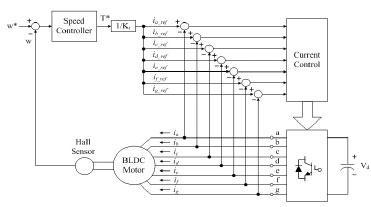 The back EMF is a function of rotor position and has the amplitude E = Ke·ωr (Ke is the back EMF constant and ωr is rotor speed). In this paper the modeling of the back EMF is performed under the assumption that all seven phases have identical back EMF waveforms. Based on the rotor position, the numerical expression of back EMF on the case of the phase A can be obtained as Eq. (1) and it is implemented as shown in Fig. 4. Also, the actual back EMF waveform is obtained from the FEA data to examine the actual torque ripple and the detailed information will be explained in “Section 4. Simulation Results.” 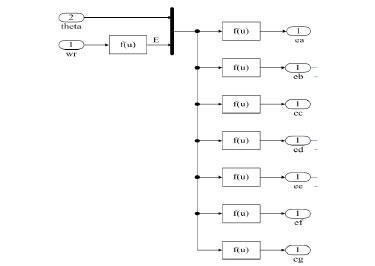 Fig. 4.Implementation of back EMF according to rotor positions

The idea is to understand how 7-phase sources are connected under the assumption of floating neutral point. Fig. 5 shows the proposed electrical representation of a 7-phase BLDC motor drive.

inductance of phase i related to phase j

Therefore, the neutral voltage νno can be simplified as

Each self-inductance and mutual inductance can be defined as follows:

Each phase voltages can be derived as Eq. (11) using switching function SF1_a,b,c,d,e,f,g obtained from current control block. Based on the derived switching function, one can generate pole voltages (Vao, Vbo, Vco, Vdo, Veo, Vfo, Vgo) by multiplying the half of dc-link voltage and phase voltages and line-to-line voltage can be easily obtained as following equations. The voltage generation process can be expressed as Eqs. (11) and (12) and it can be implemented as shown in Fig. 6. 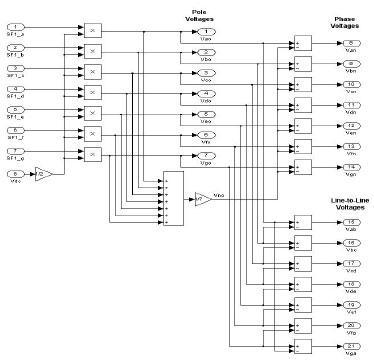 The current control strategies of the BLDC motor drive are typically grouped into pulse with modulation technique and hysteresis technique. In this paper, bipolar hysteresis current control is used for obtaining the fast dynamic response during the transient states.

In Matlab Simulink, in order to express modes [3] and [4], the memory block is used along with rotor position (θr) as shown in Fig. 8 and finally the entire current dynamics can be realized using Eq. (13). 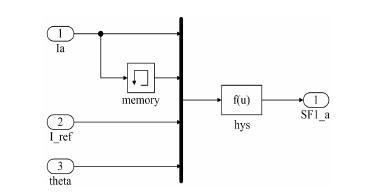 In this model the switching function SF1 is used to generate the inverter phase voltages. Therefore, each phase current can be obtained by

The electromagnetic torque is expressed as

And the equation of motion is expressed as

where, TL is load torque, J is inertia, and B is damping.

Neglecting the damping factor, speed and torque characteristics of the BLDC motor can be explained as

Using PI controller, the speed and torque control can be implemented as shown in Fig. 9.

Fig. 10 shows the back EMF computed according to the previously discussed procedure using Eq. (1) at 3,500 rpm. The rotor position is varied from 0 to 2π per electric cycle 2π /7 and the back EMF has amplitude of 19.5V. 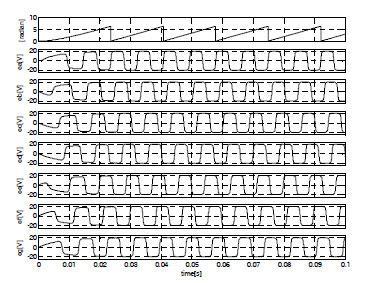 Figs. 11 and 12 show the generated phase current, dynamic responses of speed and current command waveforms by the PI controller at 3,500 rpm. The phase current has amplitude of 1.8A and is well synchronized with the trapezoidal back EMF. Also to demonstrate the speed dynamic response of the PI controller algorithm, the speed response characteristic is shown in Fig. 2 along with the reference speed change. 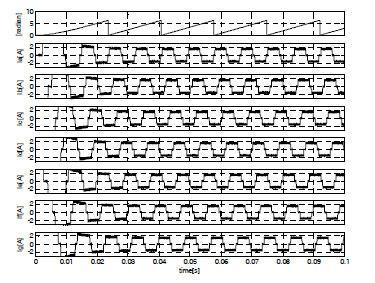 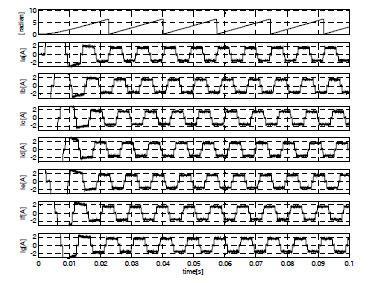 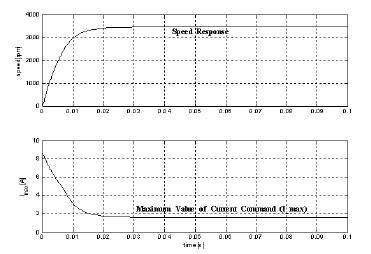 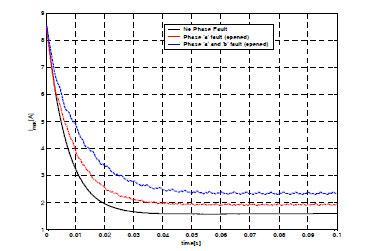 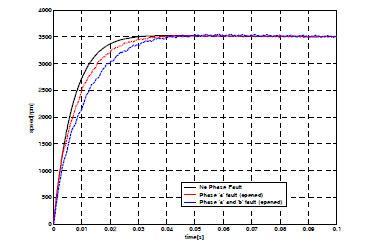 After the fault occurrence one notice the increase of the average value of the healthy phase-current, due to the reaction of the superimposed speed loop; the appearance of fluctuations in the rotor speed depends to the incoming torque ripple. Nevertheless the operation is maintained at preset speed and load conditions.

From the simulation results of Figs. 15 to 16, it is certified that the developed simulation program can effectively examine the dynamic characteristics at fault condition as well as at healthy condition of 7-phase BLDC motor drives for AUV.

A schematic diagram of the proposed drive system of 7- phase BLDC motor, which corresponds to the experimental system is designed, developed and presented in Fig. 15.

The built-in hall sensors generate seven signals according to the rotor position. These signals are decoded to identify the rotor position and energize the appropriate windings by switching the appropriate switches in the IGBT power inverter. Experimental results of 7-phase BLDC motor speed control with Fuzzy control will be compared with the results of BLDC motor speed control only with PI control.

The experimental results obtained for Fuzzy controller-based BLDC motor drive under different operating conditions such as step change in reference speed, and with load disturbance are shown in Fig. 19, Figs. 21 and Fig. 23 in comparison with PI controller. 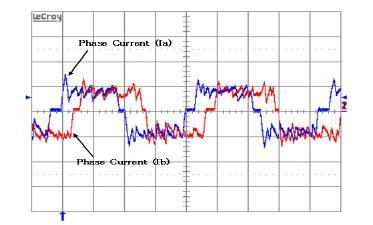 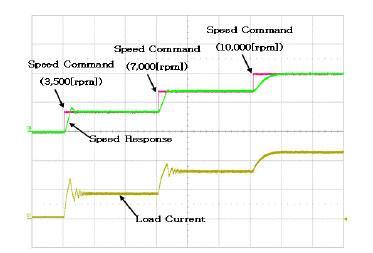 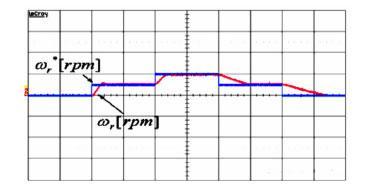 Figs. 18-19 show the phase current waveforms when the 7-phase motor operated at the steady state mode by each controller (Fuzzy, PI) respectively.

In another test, step changing has exerted in motor command speed as shown in Figs. 20~21. Speed command changing has been in case: increasing speed command 3500, 7,000, 10,000rpm respectively with speed controller. In step increasing speed, first motor command speed is 3,500rpm. Reference speed is changed to 7,000 rpm and another increasing speed, primary motor speed is 10,000 rpm which is increased to 10,000 rpm. Rising time in each case(PI controller, Fuzzy controller) is nearly 2.5~3sec. But there are some overshoot and steady state error in responses at the sudden change speed mode with PI controller. Also we know that there is no overshoot in response at 10,000rpm with Fuzzy controller and steady state error is dispensable as shown in Fig. 21. Therefore we have achieved the high speed control of BLDC motor to yield excellent performance with Fuzzy controller. 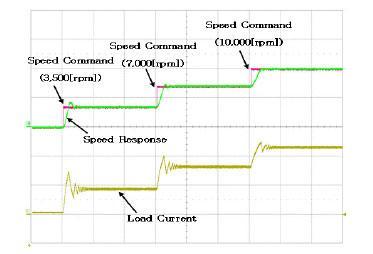 The variation of load current and speed response due to change in load applied to the 7-phase BLDC motor is shown in Fig. 24-27. Firstly to examine the performance of the 7-phase BLDC motor with each controller algorithm, it is loaded, the rated torque demand in this case is 0.2Nm and the motor speed is 15,000 rpm at the Fig. 24~25. It is certified that Fuzzy controller algorithm is successfully controlled with a small speed ripple compared with PI controller when load applied and speed changed 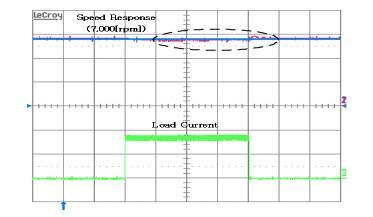 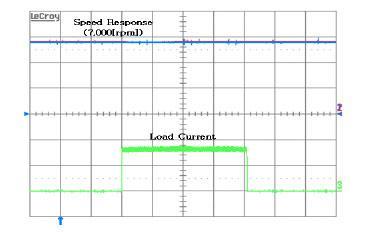 The experimental results clearly show that Fuzzy controller based 7-phase BLDC motor drive can provide an improved speed response with consistently when the system is subjected to load disturbance and step change in reference speed.

In this paper, a functional simulation model for the 7- phase BLDC motor drive is studied and the actual implementation of the model is proposed. The performance and feasibilities have been examined by the simulation and experimental verification and it is expected that the proposed simulation model can be utilized for the development of AUV systems. Also since the fuzzy control system is easy to design and implement, effective in dealing with the uncertainties and parameter variations, and has better overall performance, fuzzy controller-based 7-phase BLDC motor drive system may be preferred over PI controllerbased 7-phase BLDC motor drive for automation, robotics, position and velocity control systems, and industrial control applications.