Multiphase drives are proper for high power application, due to their advantages over conventional three-phase drives [1-3]. With the addition of extra phases, the current per phase is reduced for given phase voltage and total power rating, which makes it possible to use the standard power switches on a single device [4-6]. Increasing the number of phases is also a solution for torque pulsation reduction [7-8]. More vector planes in the multiphase motor can be manipulated to optimize air-gap flux distribution and improve the torque density [9-11]. Another distinguished advantage is improved reliability and continuous system operation even in the fault condition [12-13]. This characteristic is crucial for all the applications requiring a high degree of reliability, such as Electric Vehicle (EV) or marine.

Many papers have focused on the model and control for multiphase motor under open phase condition. For the dual-three phase induction machine, a unified approach to represent the model with single-phase open has been presented by the field-oriented control strategy [13-15]. The resilient current control of five-phase motor with sinusoidal and non-sinusoidal current excitations under fault condition is illustrated in [16-18]. Fault-tolerant control techniques for five-phase PM motors with trapezoidal back electromotive forces have been discussed in [19]. The control scheme in [20] ensures the operation of a seven-phase drive under open-circuit. However, few works focus on the models of multiphase IM with concentrated winding structure under open phases, and the optimal harmonic current injection technique is rarely discussed.

Current regulator plays a key role in the high performance, and the primary goal is to track the reference current accurately during steady state and transient condition. The precise matched comparative analysis of different current regulation strategies is discussed in [21], which is in the application of three-phase IM under healthy condition. A theoretical connection between PR and synchronous frame PI regulators is established in [22]. Hysteresis current control is widely used for its simplicity, but it results in much more harmonic current [17-18, 21-22]. The simple PI regulator realizes the excellent dc current control. However, its performance is unsatisfactory for the ac current control [23]. Fortunately, the PR regulator can achieve virtually the same steady-state and transient performance as synchronous reference frame PI regulator under healthy condition [24]. A further significant superiority of PR controller is its application to current control in the phase frame, where synchronous reference frame control is more difficult to realize under asymmetrical condition.

The decoupled model is established for the five-phase IM under open fault, and it contains inductance parameters derivation. The proposed method is based on the simple computation of the currents in the αβ subspaces, and electromagnetic torque oscillations are reduced by particular magnitude ratio currents. Then, a set of stator currents with third harmonic injection is obtained to improve the electromagnetic torque density. Third harmonic current is also utilized to decrease the amplitude of stator current, without exceeding the rate power of inverter. Furthermore, the PR current regulator is adopted to realize excellent current tracking in the phase frame. Finally, a five-phase induction motor drive with low DC link is constructed, and experimental results verify the feasibility of the fault-tolerant control strategy under single-phase open.

2.1 Voltage equations in the αβ subspace

where the current and voltage vectors are

where c0 = 0.25, and γ = 2π/5 . The electromechanical energy conversion takes place in α1β1 and α3β3 subspace. In (4) and (5), all the row vectors can’t realize the same norm simultaneously, while keeping the orthogonal property to each one. Additionally, the third row z1(3) is one degree of freedom to realize the same magnitude of stator currents [12], and the fourth row of the matrices satisfies zero sequence current equation. Then, the correlative inductance parameter sunder single-phase open can be derived, as shown in Table 1.

Reference [13] demonstrates that the electromechanical energy conversion takes place only in the α1 − β1 plane for dual-three phase IM. The five-phase IM with concentrated winding structure has two energy conversion planes, so the currents for the dual planes can be defined as

Iα1, Iβ 1, Iα 3, Iβ3 are the magnitude in the α1 − β1 and α3 − β3 planes, respectively. The steady state is contained in the paper, and the Eq. (6) is the reference stator current. At the fault occurrence, the magnitude of Iα and Iβ are changed according to the load torque [15].

In order to eliminate the torque oscillations, the current magnitude ratio is given as

To maintain the same amplitude of stator current, the currents in the z plane are identified as iz1 = 0.236isβ1, iz3 = 0.236isβ3 [12, 15]. The criterion (9) can be applied in the indirect field-oriented control scheme where the dq currents are used to control electromagnetic torque. The synchronous rotating transformation matrices in d1 − q1 and d3 − q3 planes can be expressed as

where , and . It is assumed that the fundamental and third harmonic rotor fluxes are attached to d axis, and no component exists on q axis. The expressions of magnetizing currents are

To maintain a quasi-trapezoidal air-gap flux density distribution, the corresponding magnitude currents isd3 is given by

Similarly, the substitution of the current from (12-13) into the torque expression (8), the electromagnetic torque can be derived as

According to the analysis mentioned above, the diagram of indirect field-oriented control for five-phase IM under single-phase open is shown in Fig. 1. The current regulator in the phase frame is elaborated in the next section.

This section depicts the principles of three methods for current regulator [22], and the diagram is shown in Fig. 2.

Fig. 2.Diagram of current control model in the phase frame

Since Electromotive Force (EMF) is not random disturbance, its effect on the fundamental tracking error can be substantially reduced by incorporating feed forward injection of an estimated compensation. Then, the motor transfer function is described as

Hysteresis control operates by comparison of the reference current against the feedback current. Switching state of inverter is set to high or low, depending on its error moving outside of fixed hysteresis width [21], according to

This control strategy achieves a fast current response by simple programming, though it has the limitations of variable switching frequency. Another negative effect is much more harmonic current, which increases the copper loss and torque pulsation for the system drive.

The magnitude of Gc(s) is essentially infinite at the dc because of the 1/(ski ) term. However, this method can’t realize zero ac current error in the phase frame because of the limited gain in the regulator.

In this situation, the only remaining alternative is to increase the gain of the forward controller, but this would reduce the system of stability. Fortunately, PR regulator can realize zero ac current error in the phase frame, because the resonant term has large gain at the target frequency, which can achieve good response in the fault occurrence [21-22].

From this expression, it can be seen how the term of s/(s2+𝜔e2) creates infinite forward controller gain at the target frequency 𝜔e, which is utilized to achieve zero error for tracking ac current.

where øm is target phase margin, and the value is usually set to π/6 ⌷ π/4. As described in the reference [21], the maximum cross frequency can be derived

Then the maximum possible magnitude of kp can be derived by setting the open loop gain to unity [24], when gives ki ≈ 10/𝜔c(max).

Appling the approach to the test system described for the controller gains ( kp = 0.3, ki = 0.0025s), the bode plots of forward open loop for PI and PR regulator are shown in Fig. 3. 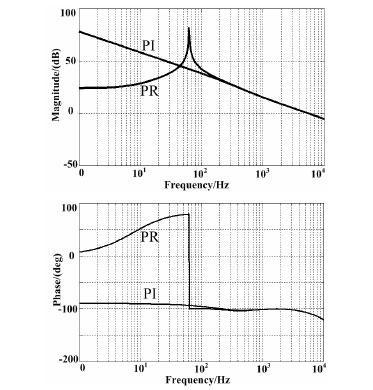 In order to evaluate the capability of the indirect fieldoriented control under fault condition, experimental tests are executed for the steady state and transient response. The drive system is depicted as Fig. 4, and the nominal parameters of five-phase IM in the healthy condition are shown as Table 2.

The performances of the drive system for three current regulators are extensively explored in the experimental tests, when the motor operates at 600 r/min with the 15N. m load. Experimental results contain the performances of steady state and transient response under phase “a” open. For the aspect of EMF compensation in the feed forward loop, the commanded ratio of V/f curve is set to 0.40.

The experimental results in Fig. 5 exhibit the current responses of drive system controlled by hysteresis regulator (method ↑). There is relatively larger steady state and transient current errors, and the maximum amplitude is about 60A shown in Fig. 5(b). Worse still, many low order harmonic currents are contained in hysteresis control, and the THD is about 21.5% by the algorithm of FFT. 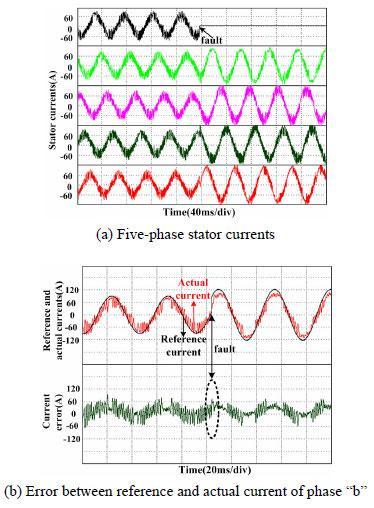 Fig. 5.Experimental results for method I

The performance of PI current regulator (method II) is demonstrated in the Fig. 6, and it is can be seen that the harmonic current is reduced significantly compared with that of hysteresis regulator. However, current pulse error at the transient response is still large. 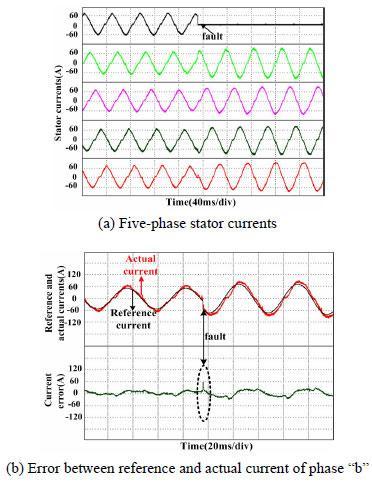 The results of PR current regulator (method Ⅲ) with EMF compensation are expressed in the Fig. 7. It can be clearly seen that the stator current is sinusoidal without low order harmonic, and the current error shown in Fig. 7(b) is minimized distinctively, especially for the transient response at fault occurrence. On the other hand, the experimental for PR regulator without EMF compensation is contained in the Fig. 8. Consequently, the current error is amplified without forward feed compensation, identifying the theoretical analysis in section 3. 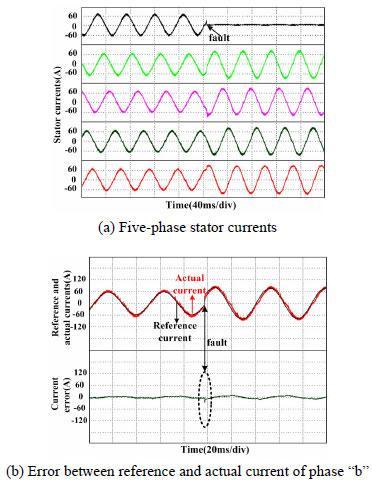 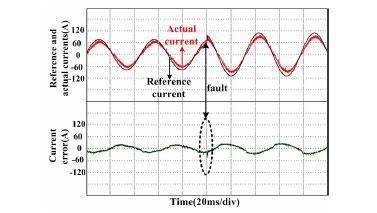 Fig. 8.Experimental results for error between reference and actual current of phase “b”

Fig. 9 depicts five stator currents and motor torque when one phase is open without any fault-tolerant control. It can be seen that torque oscillations is significantly larger, and the maximum magnitude is reach to 5N.m. Additionally, the magnitude of phase “b” increases by 65%, and it means that the load should be restricted by the inverter with same capability. 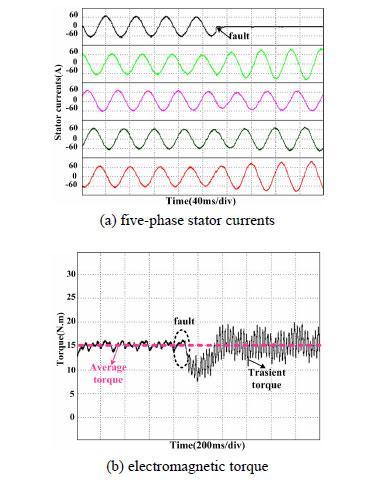 The torque ripple is reduced significantly with faulttolerant control, and the value is less than 1.5 N.m at the bottom of Fig.10(b). To further verify the effectiveness of the third harmonic current injection, the experiments are executed. The maximum of stator current in the Fig. 10 (a) is decreased by 15.6%, compared with that of Fig. 7 (a). Moreover, the electromagnetic torque is increases by 11%, as shown in Fig. 10(b). 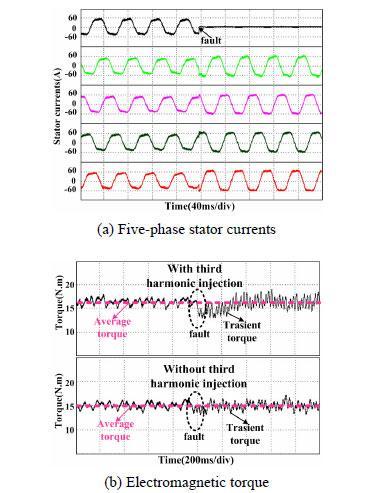 Fig. 11 (a) illustrates the experimental results for fundamental and third harmonic reference currents under single-phase open, which are mapped into d1 − q1 and d3 − q3 planes, respectively. It can be seen that isd1 and isd3 are constant, while isq1 and isq3 are approximately proportional to the electromagnetic torque illustrated in Fig. 11(b). The flux producing current isd1 is controlled at 25A, and isd3 is controlled at about 9A. Fig. 11 (b) shows that the rotor speed has no disturbance under sudden load at 15 N. m, ensuring high performance for torque control under single-phase open. 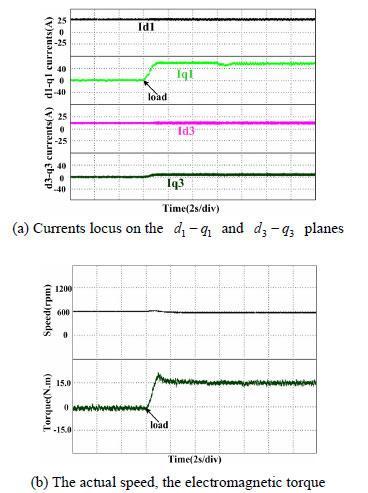 A modified model for five-phase IM under open fault has been exploited to realize high performance in this paper. The control scheme is suitable for the implementation of reducing the torque ripple, allowing disturbance-free operation with particular magnitude ratio currents. To assess the effectiveness of current control, three regulators have been analyzed in detail by comparison of current magnitude error for steady-state and transient response. The third harmonic current injection technique can be used to improve the iron utilization and torque density. The experimental results demonstrate that the proposed method is valid under single-phase open fault. Moreover, the method presented in this paper can be used for up to two open stator phases for five-phase IM.