Recently, the interior permanent synchronous motor (IPMSM) has been applied to an integrated starter and generator (ISG) for hybrid electric vehicles. In the design of such a motor, thermal analysis is necessary to maximize the power density because the loss is proportional to the power of a motor. Therefore, a cooling device as a heat sink is required internally. Generally, a cooling system designed with a water jacket structure is widely used for electric motors because it has advantages of simple structure and cooling effectiveness. An effective approach to analyze an electric machine with a water jacket is a thermal equivalent network. This network is composed of thermal resistance, a heat source, and thermal capacitance that consider the conduction, convection, and radiation. In particular, modeling of the cooling channel in a network is challenging owing to the flow of the coolant. In this paper, temperature prediction using a thermal equivalent network is performed in an ISG that has a water cooled system. Then, an experiment is conducted to verify the thermal equivalent network.

Interest in interior permanent magnet synchronous motors (IPMSM) has been growing because high torque and a wide speed range can be achieved by flux weakening of the current vector control. Recently, many researchers in the automotive area have focused efforts on IPMSM to develop an integrated starter and generator (ISG) for hybrid electric vehicles [1].

Among the many cooling methods, the water jacket type is widely applied to electric motors because of its simple structure and cooling effectiveness. A water cooled system can be designed with a water jacket inserted into a cooling channel between the housing and the stator. The coolant radiates the internal heat, which is generated in the copper, core, and permanent magnet. Therefore, the motor can be operated continually despite the high current density. A thermal equivalent network is a method to predict the temperature of an electric motor that has been studied by many researchers. However, because mathematical modeling in the radiation of heat in a cooling channel is complicated, this modeling was not precise. In this paper, the thermal transfer mechanism is explained, and the motor temperature is estimated by a thermal equivalent network and verified by experiment.

In the heat transfer, heat flows through the position 1 and 2 according to difference of temperature.

where is heat flow, T1 and T2 are temperature of position 1 and 2, RT is the thermal resistance of two position.

Based on this principle a thermal equivalent circuit is adopted to estimate the motor temperature. Fig 1 shows the process of this method. Firstly, a model equalization part is needed. Because the motor has a complex shape, it must be equalized by a simple cylindrical coordinate model for applying the method. 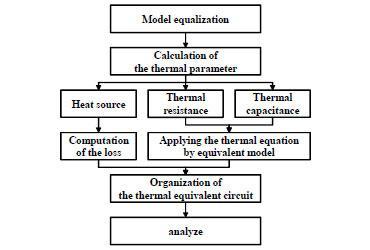 Fig. 1.The process of the thermal equivalent circuit analysis

Secondly, the parameters are calculated by thermal equation and finite element method about the heat source, the thermal resistance, and the thermal capacitance. A thermal equivalent circuit network is organized by these parameters.

Finally, by analyzing the circuit, the motor temperature is obtained. Fig. 2 shows the analysis model. The inlet and outlet of the water jacket are confirmed as shown in Fig. 2. The cooling channel is shown in part A. The coolant flows through the cooling channel, which covers between the frame and the stator surface.

A coolant radiates heat as it flows along the water jacket. Generally, losses are substituted with heat sources, which have positive values, in an equivalent thermal circuit. In contrast, radiation heat is the heat transmitted from the inside to the outside and has a negative value. As described in Fig. 3, is connected to the ground, and it indicates that the heat is radiated to external areas by means of a coolant. Consequently, it is probable that the direction of the radiation heat for a coolant is determined.

The quantity of radiant heat is expressed by

That is, the quantity of the radiation heat is related to the volume and the temperature change of the coolant, and the thermal capacity is the ability to take up heat as shown in (2). On the average, the flux of a coolant used in cooling is 8-10 LPM. As well, the temperature range between an inlet and an outlet for a coolant is roughly 2-3℃. Because the flow rate and difference temperature is stable, these values or measured values are used.

The flow of a coolant according to the cooling channel is defined as forced convection by water. In the convection, the thermal resistance is derived by

where h is the coefficient of the heat transfer by forced convection, and A is the area through the coolant. Fig. 4 shows the r-z section views included in the cooling channel, which is located between the housing and the stator. In general, a cooling channel is parted by one or several paths, which have a helical shape or even several parallel lines. This flow is formulated by the forced convection studied in fluid mechanics. The equation of the forced convection is adopted by the pipe flow. The flow of coolant is described by the pipe flow. In [3], Nu, Pr, and Re are calculated by an experimental method in the flow.

Fig. 4.Section view from r-z including the cooling channel.

This experimental equation is derived by

where f is the friction factor, Nu is the Nusselt number, Pr is the Prantl number, and Re is the Reynolds number. These dimensionless numbers are essential to analyze the fluid flow [4]. In particular, because Nu is the related coefficient of the heat transfer, h is computed by

where k is the thermal conductivity, and Dh is the characteristic length through the flow of the coolant. The flow area of the coolant is calculated by

The thermal capacity is converted by the capacitance. In other words, delaying the voltage change in the circuit is a similar effect as delaying the temperature change. The thermal capacity is a product of the mass and the specific heat. In particular, the specific heat can be classified under two values: a constant volume and a constant pressure. The former is used in the driving mode of the motor because of the constant volume of the fluid as follows. This is calculated by

3. Organization of the Thermal Equivalent Circuit

There are many similarities between the equivalent thermal circuits based on air-cooled and water-cooled systems. The only difference is that the outer surface of a stator is directly connected to the housing, or the convection thermal resistance in the former and an additional water jacket is attached with the same structure. Thus, the two interior circuits are almost identical. Fig. 5 describes the configuration of the equivalent thermal circuit with a water cooling system. The part marked as the dotted line with the color “red” is the water jacket. As explained in II, it includes the radiation heat, the thermal resistance in the case of a forced convection, and the thermal capacitance. In addition, a circuit for housing is shown in the left figure and the stator and rotor are shown in the right. Since a variety of research for the interior equivalent thermal circuit has been performed, it is identically applied in this paper by considering the model [5, 6]. Here, the thermal resistances in a radial direction are allocated from the left to the right, and the ones in the axial direction from the upper to the lower. That is, the flow of heat is converted from three to two dimensions, thereby permitting precise calculation.

Fig. 5.The configuration of the equivalent thermal circuit with a water-cooled system

The analysis model presented in this paper is a motor for the ISG. The ISG is emerging as a low-cost fuel-saving technology in vehicles. In addition to its conventional alternator functions, it fulfills some functional requirements of mild hybrid systems, including starting the stopped internal combustion engine (ICE), driving the vehicle when starting, driving the auxiliaries when the ICE is stopped, and regenerative braking. Supporting the ICE during acceleration is also possible with ISG technology. The power-flow control of fully hybridized PHEVs in this work shows potential to become a new application of ISGs [7].

The specification of an electric machine is shown in Table 1. It has 6 poles / 36 slots with distributed windings.

Table 1.Specification of the analysis model

Furthermore, it generates 23.5 Nm and 8 kW at the operating point, 3250 RPM. This size indicates the external diameter of the stator.

As shown in Fig. 2, the exterior shape of the motor is so complex that it is not simple to determine the convection coefficients of the air and housing when the equivalent thermal circuit network is applied. In this case, since it is a water-cooled motor, the conditions of the air and housing cannot have a strong influence on it. The temperature of the housing is almost the same because the cooling water makes housing that is the same temperature regardless of complexity of the exterior shape.

Fig. 6 describes the configuration of the analysis model. The left shows the shape of the actual model, and the right, the model needed to utilize the equivalent thermal circuit network. Because it is based on a cylindrical model, the figures of the slot, the permanent magnet, and the flux barrier are treated with the same areas.

Fig. 6.Configuration of the analysis model

Table 3 indicates the values of the heat sources. Copper loss is the heat generation due to resistance in the coil. Core loss is classified by hysteresis loss and eddy current loss. Fig. 7 shows calculation process of core loss [8, 9]. Changing flux density is computed each element according to finite element method (FEA), harmonic order is obtained using Fourier transform. In the element, all of core loss values are added. Finally, core loss is calculated in the all element.

Table 3.Value of the heat source

5. Results of the Analysis and Thermal Test

Temperature analysis and the corresponding experiment are performed. For analysis, the equivalent thermal model is needed and a condition is shown in Table 2. The operating point is 3250 RPM and the load is 23.5 Nm. To consider the actual condition, the external temperature is 105℃. This value equates to the chamber temperature. As well, the cooling water flows inside the motor and the temperature of its inlet is 70℃, while that of its outlet is 72-73℃. Table 3 shows the motor loss. The copper and core loss is converted to heat source. This value is applied to thermal equivalent circuit.

As a result, we can confirm that the temperature of the coil ranges from 70℃ to 139℃. An experiment is performed to verify the results. Fig. 8 shows a test set used in the experiment. A thermal couple is attached to the end coil inside the motor to identify the temperature. Moreover, a dynamo is connected to the motor to inject the load and a torque meter to measure the value of the torque. 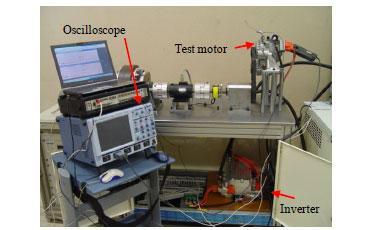 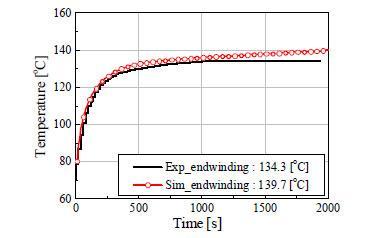 Fig. 9.Analysis and test result of the thermal analysis

This paper formulates an equivalent thermal circuit network with a water cooling system and verifies the results through an experiment. In the case of a water cooled motor, it is difficult to apply a thermal analysis modeling of a cooling channel and the calculation of the convection coefficient in the forced convection. A circuit is made after the thermal properties of the fluid as the cooling liquid is considered. The motor for HSG, which is used in the experiment, has a complex shape of housing, but the cooling channel can be simplified as one channel, which is applicable to the experiment. The error between simulation and experiment is almost 10%.

The results show that it is possible to perform a temperature analysis and predict the thermal properties of a motor using an equivalent thermal circuit network during the preliminary design. Applying this result and process, the design is smaller and is stable in the thermal problem.