In the design of the rotor of an interior permanent magnet synchronous motor (IPMSM), the bridge between the permanent magnets helps prevent the scattering of permanent magnets and pole pieces during high-speed operation. In the design of a motor, if the bridge is too thick, its performance will be largely degraded because of flux leakage. Additionally, if the bridge is too thin, its mechanical safety cannot be guaranteed. Thus, an accurate analysis method is required to determine the thickness of the bridge. Conventional stress analysis methods determine the thickness of the bridge by only considering the centrifugal force of the rotors. In this study, however, a method that additionally considers the radial force generated by the air-gap flux density based on the conventional methods is proposed and reflected in the design of a traction motor for electric vehicles. Finally, the validity of this study is verified through a reliability test related to high-speed operation.

Recently, the interior permanent magnet synchronous motors (IPMSMs) have been frequently used in traction motors for vehicles, and their driving scope has also been extended to high-speed operation at more than 10,000 rpm in order to increase power densities [1-2]. For such highspeed motor operation, the accurate stress analysis of rotors is an important factor in the reliability of motors. If the safety factor is not properly calculated because of an inexact stress analysis, it will cause a serious problem in the reliability test at high-speed operation owing to mechanical interference between the rotor and the stator, as presented in Fig. 1. 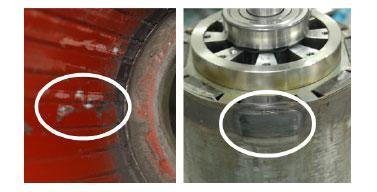 Fig. 1.Mechanical interference between the rotor and the stator

In this study, a method that considers the additional radial force caused by an electromagnetic phenomenon in addition to the conventional stress analysis method, which usually considers the centrifugal force of the rotors [3], is proposed for calculating the safety factors more exactly. The motor used in this study is in the 120-kW class used for traction applied to military trucks, and its performance specifications, dimensions, and material information are presented in Table. 1. Additionally, Fig. 2 shows the shape of this motor.

Table 1.Specifications of the 120-kW motor 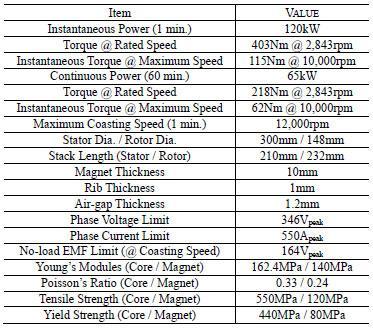 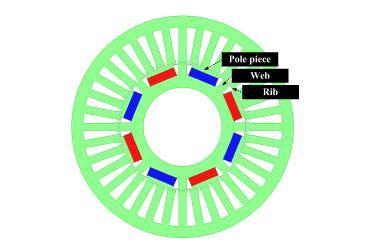 2. Calculation of the Radial Force

The radial force is not a type of actual force (tangential force) but rather affects the vibration or acoustic performance [4-6]. Furthermore, the direction of this force coincides with the scattering direction of the rotors, which is caused by the centrifugal force of the rotors, and is used to produce a more exact result when it is accounted for in the calculation of stresses.

For the calculation of the radial force, the worst condition is a point at which the motor is operated at the maximum speed (10,000rpm) while applying current (with a phase current of 500Apeak and a current phase angle of 76.8°) or the coasting speed (12,000rpm) without applying a current at a downward slope.

The radial force can be calculated using Eq. (1), in which the radial flux density in the air gap can be obtained using FEA [7].

where Bgr is the radial flux density at the air gap, θ is the rotor position, and μ0 is the permeability of free space.

Figs. 3 and Fig. 4 show the radial flux density and flux density distribution plots at two driving points. The flux density distribution at the maximum speed shows a wide magnetic saturation area. However, the condition at the coasting speed exhibits a radial flux density approximately 24 % higher than the condition at the maximum speed according to the comparison of the integration values of Bgr2, which are proportional to radial force. It is expected that the flux weakening current is generated along the direction of decreasing air-gap flux. Based on this fact, it is revealed that the worst condition of the calculated stress is the coasting speed region that exhibits a large radial force and centrifugal force. 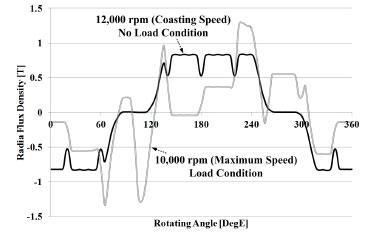 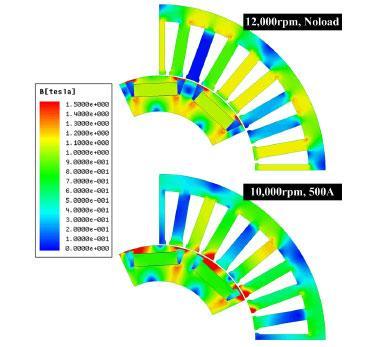 Fig. 5 shows the spatial distribution of the radial force per unit area at the coasting speed. When comparing this result with the shape of the rotor in Fig. 2, it is verified that the radial force is symmetrically distributed, and most of the force is focused on the pole piece, which is the front side of the permanent magnet. 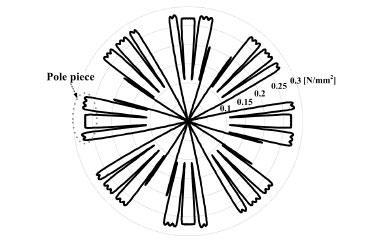 Fig. 5.Spatial distribution of the radial force at 12,000rpm

In general, the stress analysis considers only the centrifugal force:

where F is the centrifugal force, m is the mass, v is the rotational velocity, and r is the radius of the mass.

The stress analysis shows differences in the results according to the boundary conditions. In this paper, there are no friction conditions on the contact face between the magnet and the pole piece, and a bonding friction condition is only applied to the backside of the magnet. In addition, the calculated radial force is mapped to the thick area on the pole piece in Fig. 6. The final equivalent stress is calculated using FEA after applying all these conditions at 12,000 rpm. 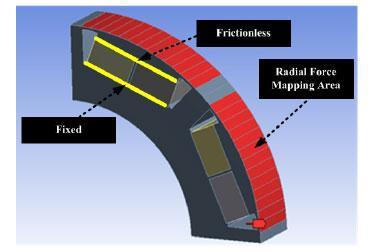 The safety factor can be calculated as:

To determine the effect of the radial force, the final model is analyzed using the conventional and proposed methods. The results of this comparison are presented in Figs. 7 and Table 3. Fig. 7 is intended to more reliably confirm that the result was 170 times larger than the actual deformation. It is verified that the stress is usually distributed in the rib and bridge of the rotor in these two cases. However, there is a difference in its equivalent stress of approximately 9MPa when considering the radial force. The difference is equivalent to the safety factor of 0.13 and cannot be neglected in the precise design of the bridge. 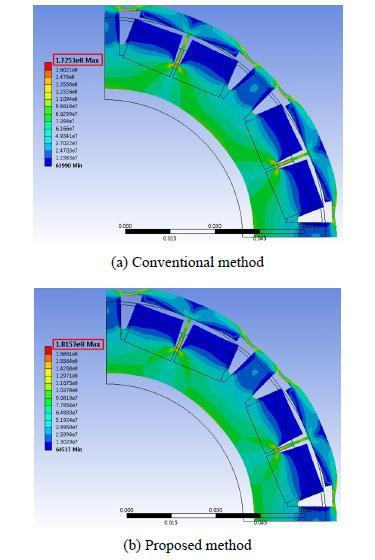 Table 3.Comparison with the conventional and proposed methods

To verify the validity in the design of the bridge, the final model was fabricated, and tests were performed. Figs. 8 and Fig. 9 represent the fabricated cores, motor, and dynamometer. 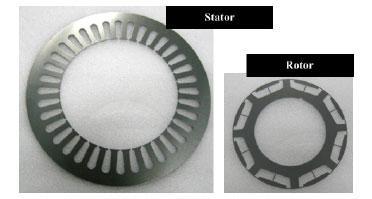 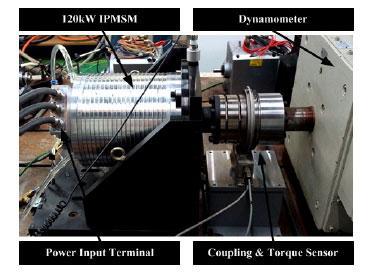 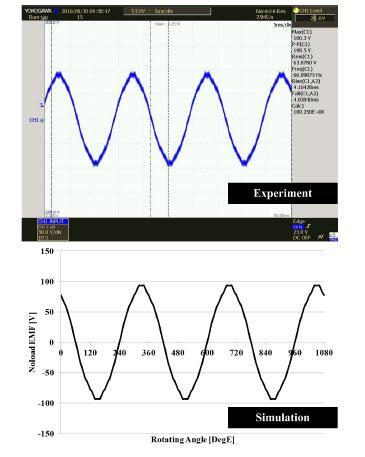 Table 4.Comparison with the experiment and FEA

The profile of the high-speed cycle durability test is presented in Fig. 11, where the test had duration of 36,000 cycles for 500 hours. The coasting speed test rotated the fabricated motor compulsorily by operating the test dynamometer at 12,000 rpm for 5 min. Based on the results of these two tests, there were no mechanical problems and no changes in motor performance. Additionally, it was verified that the stress analysis method and bridge design proposed in this study are reasonable. 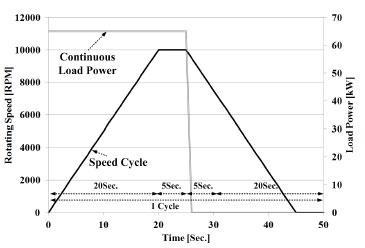 In this study, a stress analysis method considering the radial force was proposed and applied to the design of a 120-kW IPMSM. Additionally, the validity of this method was verified by fabrication of a model and testing.

The results of this study show that the proposed method is effective for a switched reluctance motor (SRM) with a very large radial force and small air gap [8-9].