It is interesting to note that the abc (phase variable) reference frame of a permanent magnet synchronous motor is usually transformed to the dq0 (space vector) reference frame to simplify the analysis of a three-phase circuit fed by sinusoidal wave (hence sinusoidal back EMF). dq0 transformation is not appropriate and has not been implemented in this paper because the brushless DC motor is fed by rectangular wave and has a trapezoidal back EMF.

2. Mathematics of the Brushless DC Motor

A schematic diagram of a brushless DC motor drive (wye-connected) is shown in Fig. 1. The equations shown in the latter part of this paper are based on this system. Wye-connection is chosen in this study because it is applied in most applications thanks to its simpler commutation logic, which is less prone to bridge-shorting [12].

A few assumptions are made in order to reduce the mathematical complexity of the brushless DC motor drive. They are: (1) symmetrical three-phase winding, (2) no magnetic saturation, (3) no hysteresis and eddy current losses, (4) uniform air-gap, (5) mutual inductance is ignored, and (6) armature reaction is ignored.

Mathematical model of armature winding is

The back EMF are displaced by 120 electrical degrees from one phase to another, and they can be expressed as

For a wye-connected three-phase winding, the total phase current is zero according to Kirchoff’s Current Law, thus

Eqs. (7, 10), and (13) can be transformed into Laplace domain with the Differentiation Theorem, which can then be expressed in the form of state-space equations giving a multiple-input-multiple-output (MIMO) correlation which is crucial in computer simulation. State space equations of the brushless DC motor are

Theoretically, the back EMF of each phase of a brushless DC motor has a trapezoidal waveform and the current has a pulse-like waveform which alternates its direction every half wave, as shown in Fig. 2. 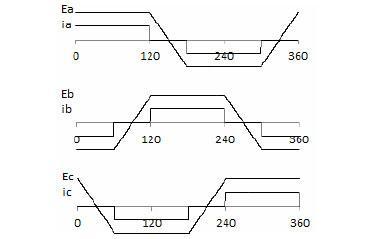 Fig. 2.Waveforms of back EMFs and currents of the three phases as a function of electrical angle (degree).

Assuming the windings of the three phases are symmetrical, the magnitudes of back EMFs and currents should be equal for the three phases. From Eq. (11) and Fig. 2 it can be seen that the electromagnetic torque developed by a brushless DC motor at any instant is 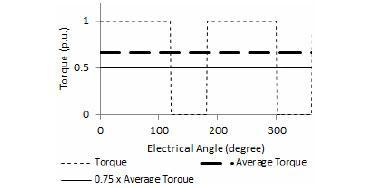 The idea behind Eq. (18) is to find an average value produced by Eq. (17) and invert the low side of the calculated electromagnetic torque to the high side about that average level. Without violating the theory of the brushless DC motor, Eq. (18) gives a precise estimation of the electromagnetic torque produced by a brushless DC motor using information on the single-phase current alone. 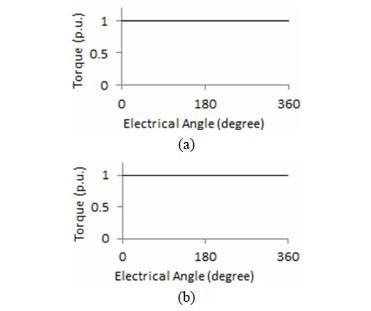 Figs. 5(a) and (b) show identical results and hence Eq. (18) is able to calculate electromagnetic torque correctly by theory.

Section 3 theoretically shows how Eq. (18) correctly calculates the electromagnetic torque produced by a brushless DC motor. In order to verify the validity of Eq. (18), laboratory experiments need to be conducted.

A brushless DC motor of 1.2 kW is tested with a motor dynamometer to validate Eq. (18). Measurement shows that the corresponding brushless DC motor has a back EMF constant and hence a torque constant of 0.07 Nm/A (V/rad.s−1). Measurement of motor parameters like phase resistance, inductance, and rotor inertia is not needed because these parameters are irrelevant in the evaluation of electromagnetic torque. The motor dynamometer test set-up is shown in Fig. 6. For better interpretation, it is expressed as a schematic diagram in Fig. 7. 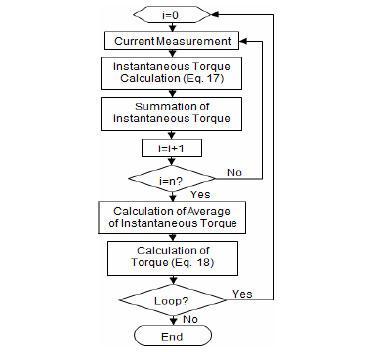 Fig. 8.Algorithm implemented in the Arduino microcontroller for torque estimation.

The value of n should be carefully selected so that it is large enough to smooth out the measurements and small enough to be utilised for real-time application.

The loop decision block (Loop?) is added for the sake of completeness of the algorithm. It indicates the termination criteria of a measurement. For example, the algorithm can be designed in such a way that it will acquire 10 readings and then exit; then the loop decision block will be “No” upon 10 cycles of looping. It has no meaning in the determination of electromagnetic torque.

With the algorithm shown in Fig. 8, the torque is estimated at a motor speed of 3150 RPM with a load of 0.30kW and is shown in Fig. 9. In the same figure, the actual torque generated by the brushless DC motor is superimposed. Since the brushless DC motor has 89% efficiency at 3150rpm, the electrical power produced by the motor is 0.33kW. The term efficiency has taken the load torque imposed by the dynamometer, motor friction and inertia into account as described by Eq. (13). 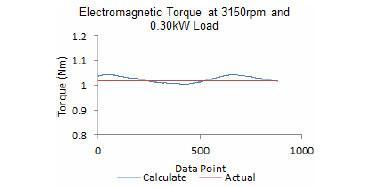 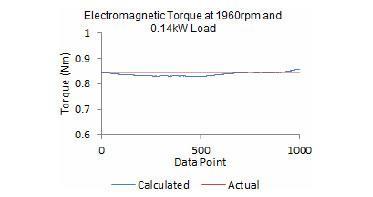 Fig. 10.The electromagnetic torque produced and estimated at 1960 rpm with 0.14kW loading. 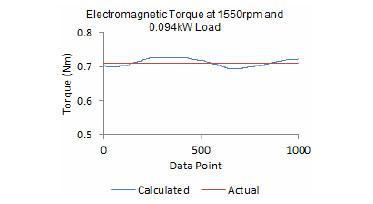 Fig. 11.The electromagnetic torque produced and estimated at 1550 rpm with 0.094kW loading.

There are several types of dynamometer; for example, engine dynamometer, motor dynamometer and chassis dynamometer. The motor dynamometer is commonly used to measure the force, torque, or power of an electric motor, and it is used in this research. It is observed from Figs. 9, 10 and 11 that the electromagnetic torque evaluated with Eq. (18) is comparable to the actual torque developed to counterbalance load torque imposed by the dynamometer. Therefore, Eq. (18) can estimate the electromagnetic torque accurately with single-phase current measurement alone, which is cost-effective and computationally efficient.

Theoretically, electromagnetic torque developed should be of a constant value. Measurement showed, however, that there was torque fluctuation about a mean value, which can be seen from Fig. 9, 10 and 11. This fluctuation is known as ripples in the context of the brushless DC motor. Torque ripple is unavoidable because the phase flux linkage and current in stator windings are not sinusoidal [4]. The greatest torque fluctuation is found to be 0.025Nm in Fig. 9, 0.033Nm in Fig. 10, and 0.032Nm in Fig. 11, which correspond to 2.5%, 3.9% and 4.5% of measurement deviation respectively. The average of the estimated value showed that the actual and the calculated electromagnetic torque were identical in each test.

Care should be taken while implementing Eq. (18) because it has the following limitations

1. Applicable to three-phase brushless DC motor only. 2. Identical back EMF spatial distribution with 120 electrical degrees offset among the three phases. 3. Half-wave symmetry and zero average back EMF and excitation current. 4. Constant and identical phase resistance and inductance with negligible mutual inductance among motor phases. 5. Excitation currents are in phase with their respective phase back EMF.

Limitation 1 can be extended to the multi-phase brushless DC motor by using the technique discussed in section 3 as long as condition 4 and condition 5 are fulfilled. In that case, condition 2 and condition 3 must be adjusted accordingly.