Wind power generation has been viewed as a promising renewable energy to meet challenge of climate change. However, wind power is susceptible to climate change because previous investigation shows there are declining trends of the land surface wind speeds over middle and lower latitudes. Since long term variation trends is notably different from inter-annual random variation and could have notable impact on wind farm from planning perspective, observed meteorological data of Taiwan is investigated to find out long term variation trends of wind speed and its impact on wind power generation. It is discovered that wind speed in majority of stations in west coast of Taiwan have ascending trends while that of all investigated stations in east coast have descending trends. Since east of Taiwan is not suitable for wind power development for its higher likelihood suffering Typhoons and most of established wind farm locate in west coast of Taiwan, it is speculated that long term variation trend of wind do not have notable negative impact on wind power generation in Taiwan.

With the advances in technologies and the booming development of industries, carbon dioxide emission from the conventional energy accelerates the global warming effect. As the global warming intensifies, the anomaly climate changes, and severe ecological damages occur more often. Therefore, governments world-wide are mobilizing initiatives to exploit renewable energy sources to mitigate increasing demand of energy and environmental concerns. Renewable energy (wind/solar) based power system is a nature-friendly option for power production to foster sustainable development challenges [1]. Wind power is currently being evaluated as one of the most viable alternative energy resources.

The wind resource assessment is one of the most important phases in the development of large scale wind farms. Initially, knowledge of climatology and any existing background wind data or available broad-scale regional maps is utilized to determine region of interest to development. Then, wind masts will be established in several prospective sites to collect wind data at various heights for one or more years. Thereafter, the energy production estimates that are generated based upon the results of the wind measurement can be utilized to determine the feasibility of a proposed wind farm. Since the cycles such as El Nino/La Nina could produce notable variations in annual mean wind speed, the variation in inter-annual wind speed should also be investigated with historical meteorological wind data [2]. However, wind resource is susceptible to global climate change. Climate evolution related changes will likely either positively or negatively impact development of the wind energy industry, with such gains and losses depending on the region under consideration [3].

Previous investigation shows that there are declining trends of the land-surface wind speeds presenting over both middle and lower latitudes, such as China and India [4, 5]. From the panning perspective, the long term decline trend is notably different from inter-annual random variation. Moreover, slight decline trend in wind speed could trigger notable decrease in wind power generation since wind power is proportional to cubic of wind speed. Therefore, long term variation trends of wind speed and its impact on wind power generation deserves in-depth study.

where E denotes energy density (Wm−2); V denotes wind speed at hub height (ms−1); and ρ denote standard air density. It is approximately1.225 kg/m3 at sea level and at 15 ℃ according to International Standard Atmosphere. Air density decreases with increasing elevation. Moreover, it changes with variances in temperature or humidity, too. Since aim of the article is to investigate long term variation of wind power generation and the factors that affecting atmosphere density (elevation, average climate such as temperature and humidity of the meteorological station) did not change significantly, their impact is not investigated in the article.

The wind energy captured by wind turbine is

2.2 Variation of wind speed with height

The wind speed measurements to determine the wind potential in the site are generally made at the standard elevations such as 10m. The wind data also used in this study is measured at 10 meters height above ground level. The wind speed is proportional to elevation. Therefore, it is necessary to know the wind speeds at the various turbine hub heights for the wind farm projects. The power law described in (3) is used to obtain the extrapolated wind speeds for investigated observation station [8].

where v(h1) is original wind speed recorded at anemometer height (h1), v(h2) is the wind speed to be determined for the desired heights h2, h0 is the surface roughness. Approximate values of surface roughness length for various terrains are listed as Table 1. 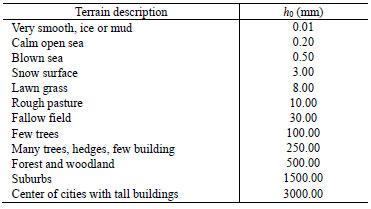 In this study, roughness length of 30mm and typical hub height of 80 meter is utilized. Bring them to (1) get

2.3 Variation of wind speed with height

In this study, annually thousands of wind measurements have been collected in each meteorological station. Since there are about 10 to 40 wind measurement a day, the annual generation Ewind could be calculated according to (5).

where P can be calculated according to power curve of wind turbine.

Since capacity of mainstream wind turbine are among 1 to 2 MW, Vestas 80-1800 with 1800kW of installed power is selected as typical wind turbine for investigation. It is installed at 80m of height with blade diameter of 80m, area swept of 5026.5 m2, cut-in wind speed of 4 m/s, nominal wind speed of 15 m/s, and cut-out wind speed of 26 m/s. The data are collected from manufacture specification sheets via [9] and the wind power curve is plotted as Fig. 1. 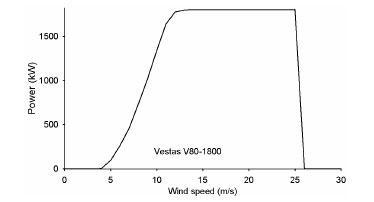 Altogether, there are 73 stations recording hourly wind speed with various durations [10]. Of which, 20 stations records data longer than 2 decades while only 14 of these 20 stations have satisfying wind power with annual utilization hour higher than 1000 hours as plotted in Fig. 2. Moreover, Since Mazu, Chinmem, and Dongsha are too far away from Taiwan Island to transmitted wind power generation to TaiPower, climatic wind data of the remaining 11 stations are utilized to investigate long term variation trend of wind power generation under context of climate change. Details of these stations are listed as Table 2 and their location is plotted as Fig. 2. 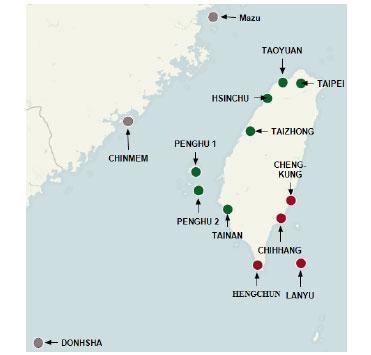 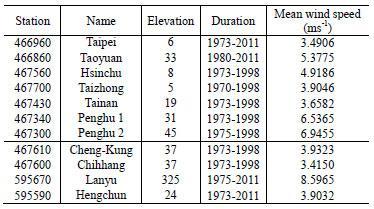 It can be observed that all the stations are in coastal area, which is consistent to [11]. According to [11], area along west coast of Taiwan has promising potential for large scale wind power development since there is strong north east trade wind in the winter. Stations in west coast of Taiwan are plotted as green circle in Fig. 2. The east coastal stations with low wind speed in the winter and high likelihood suffering typhoon in the summer, are analyzed separately and marked in red in Fig. 2.

Investigated data spanned from 1973 to 2011. No procedures were undertaken for remedy of missing data. Since dense measurement lays foundation for correct wind power calculation, the annual data with measurements less than 2000 is discarded to preserve data quality. Moreover, the months with measurements less than 150 are discarded and the annual data is discarded correspondingly. Thereafter, 288 months to 468 months data are utilized to analyze long term variation trends of wind power in Taiwan. Since the wind turbine equipped with yaw system can accurately capture wind direction, the wind direction is not analyzed in the article.

Calculation of wind power is listed as follows.

The monthly mean wind speed & power of stations in west coast are plotted as Figs. 3 and Fig. 4, respectively. It can be observed that the wind speed & power climb up periodically in the winter for the strong trade winds. Both stations in Penghu outperform the others notably. Since wind power is proportional to cube of wind speed, it can be observed that the peak-valley difference of wind power is more impressive than that of wind speed. 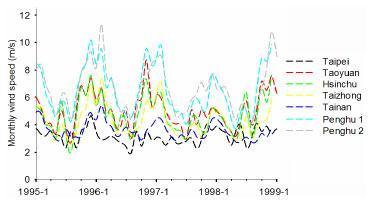 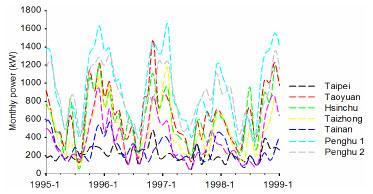 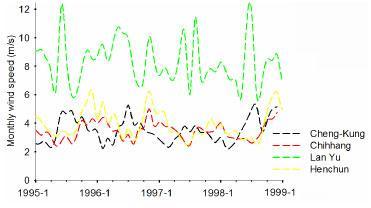 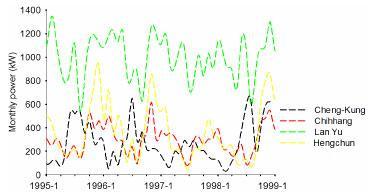 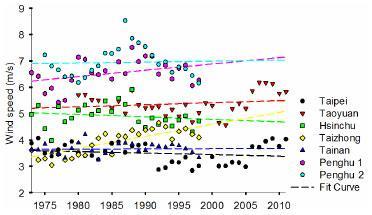 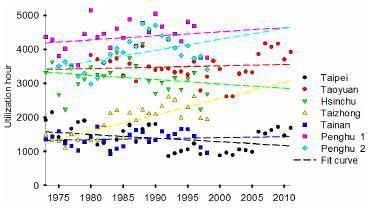 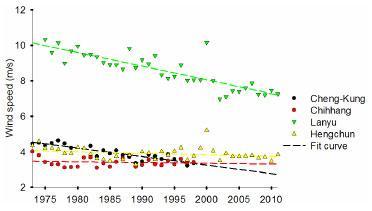 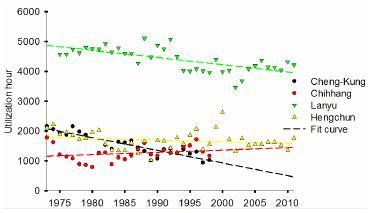 It seems that there are declining trend in both wind speed and wind power generation in all stations of east coast. This is different from inter-annual random variation. The most impressive change occurs in Lanyu station. The decadal mean wind speed decreases from 9.7837 ms−1 in 1970s to 8.6236 ms−1 in 2000s. Since extreme wind speed over cut out speed of wind turbine is not useful for wind power generation, the decrease in decadal mean annual utilization hour is much mild than the wind speed. Similar decrease in utilization hour occurs in Cheng-Kung. Decadal mean utilization hour decreased significantly from 2005 in 1970s to 1244 in 1990s, which is not worth of wind power investment.

In order to see the trend more clearly, the decadal mean wind speed & utilization hours are listed in Table 3. The variation of wind is also calculated and listed and the stations with decline trend in wind speed are listed in shaded area. 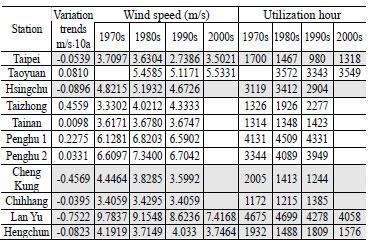 It can be observed from Table 3 that there are declining trends in wind speed of majority of investigated stations. Since wind speed and wind power generation in all stations in east coast suffered declining, it seems there is spatial correlation in variation trends of wind. In order to depict the spatial correlation clearly, the variation trend is plotted in Fig. 11. 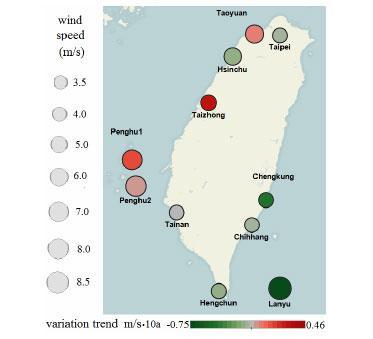 In Fig. 11, the scale of a circle denotes the mean wind speed. The bigger the circle, the higher the mean wind speed, and vice versa. The color of the circle denote variation trend of the station. The station in red underwent ascending trend and the station in green suffered declining trend. It can be observed from Fig. 11 that there is notable spatial correlation in variation trend of wind speed. All the stations in east coast suffered decline in wind speed more or less. On the other hand, majority of stations in west coast have ascending trends. Moreover, there are only slim declining trend in Taipei and Hsingchu.

In order to find out the long term variation trend impact on wind farm development, established wind farm in Taiwan is plotted in Fig. 12 according to statistics in [12]. 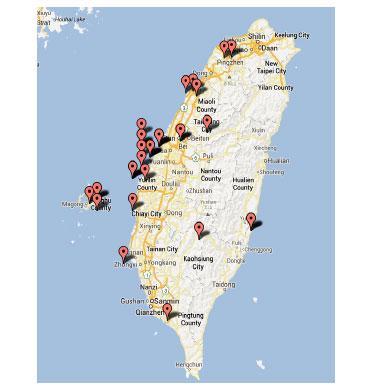 It can be observed from Fig. 12 that most wind farms located in the west coast Taiwan while only a few wind farms located in east coast. Since majority of stations in west coast have ascending trend in wind speed, it is speculated that climate change related long term variation of wind speed could have positive impact on wind power generation. Since the east coast of Taiwan has higher likelihood of suffering Typhoons, it is not suitable to develop wind farm over there. Therefore, it is speculated that the declining in east coast will not negatively impact wind power generation in Taiwan notably.

Meteorological data of 11 stations in Taiwan was analyzed in the article to investigate long term variation of wind power in Taiwan. The contribution of the article is listed as follows.

It is discovered wind speed in most station are not stable and there are detectable declining or ascending long term trend in most of stations. The long term variation trend of wind in Taiwan has spatial correlation. All stations in east coast of Taiwan have declining trends while majority of stations locate in west coat of Taiwan underwent ascending trends during past decades. Since ascending of wind speed occurs in west coast with many wind farm and descending of wind speed occurs in east coast that are not suitable for wind farm development, it is speculated that climate change related variation in wind speed could benefit or at least no negative impact on wind power development in Taiwan in all.

It should be pointed out that since only very limited data is available for analysis (most of stations with 24 years data), this is only an initial study. In order to get comprehensive knowledge of long term variation trend and their impact on wind power industry in Taiwan, more data and precise climate modeling is highly preferred.