It is necessary to measure the current of rotor for controlling the active and reactive power generated by the stator side of the doubly fed induction generator (DFIG) system. There are offset and scaling errors in the current measurement. The offset and scaling errors cause one and two times current ripples of slip frequency in the synchronous reference frame of vector control, respectively. This paper proposes a compensation method to reduce their ripples. The stator current is variable according to the wind force but the rotor current is almost constant. Therefore input of the rotor current is more useful for a compensation method. The proposed method adopts the synchronous d-axis current of the rotor as the input signal for compensation. The ripples of the measurement errors can be calculated by integrating the synchronous d-axis stator current. The calculated errors are added to the reference current of rotor as input of the current regulator, then the ripples are reduced. Experimental results show the effectiveness of the proposed method.

A double fed induction generator (DFIG) is a popular wind turbine system due to its high energy efficiency, reduced mechanical stress on the wind turbine, and relatively low power rating of the connected power electronics converter of low costs [1-4]. The vector control of the rotor current is used to control the active and reactive power independently and stably using a rotating reference frame fixed on the gap flux [5-7]. Therefore, precise measurement of the rotor currents is very important in the vector control [8, 9].

The rotor- and grid-side currents are measured from the current sensors of the converter through low pass filters and A/D converters. In this process, current measurement errors can be generated due to the non-linearity of the current sensors, quantization error of A/D converters, and the thermal drift of the analog electric elements. These errors cause the ripples in the produced power of the DFIG [10, 17]. The errors can be classified as offset errors, scaling errors and non-linearity errors.

In [19], a method was proposed in order to solve the problem of the offset and scaling errors in the DFIG system. The method obtains the two errors directly from the phase currents of the rotor side, and compensates the two errors on the current measurement path. It can improve the steady state performance of the DFIG by eliminating the effects of the offset and scaling error. However, this method cannot guarantee the complete compensation in the transient state because the phase currents of the stationary reference frame are used as inputs for the calculation of the errors.

This paper analyzes the error components of the offset and the scaling on the basis of the synchronous reference frame of the DFIG, and proposes a compensation method to reduce the effect of the errors. The proposed method adopts the synchronous d-axis current of the rotor as the input signal for compensation due to the several advantages. This method can be simply implemented by calculating the several integral and subtracting operations. Also the method is well operated not only under the steady state but also under the transient state, and robust to the variation of the machine parameters. The validity of the proposed method is verified through the experiments.

Fig. 1 illustrates the configuration of a DFIG system. As shown in Fig. 1, the stator magnetizing current is obtained from the grid. 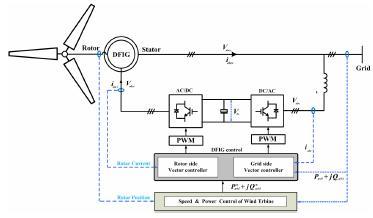 The voltage equations and the stator flux of the synchronous reference frame are given in (1-3) and (4).

where ωe is the synchronous angular speed, Ls is the selfof stator and Lm is inductance the magnetizing inductance.

The voltage equations and the rotor flux of the synchronous reference frame are given in (5-7) and (8).

where ωr is the angular speed of the rotor.

The produced active and the reactive powers of DFIG are given by (9) and (10).

By using (1-3), and (4), the active and reactive power equations of DFIG can be rewritten as follows:

As known in (11) and (12), the synchronous d- and q-axis currents of the rotor are directly proportional to the reactive and active powers of a DFIG, respectively. In this paper, two rotor current sensors are used for the vector control of back-to-back converter of a DFIG.

Fig. 2 shows the measurement path of the rotor currents for DFIG control. Because of the non-linearity of the hall sensors, the thermal drift of the analog elements, quantization error of the A/D converters, and unbalance of each element, the errors are generated from current measurement path and inevitable even if the control system is well designed and constructed.

Fig. 3 shows the block diagram of the calculating process about the influence of rotor phase current offset error. 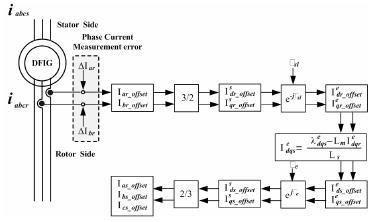 From (13), the synchronous d-q axis ripple currents of the rotor are expressed as:

The synchronous d- and q- axis current ripples by the offset in the stator can be derived in (16) and (17), respectively.

Fig. 4 shows the block diagram of the calculating process about the influence of rotor phase current scaling error.

If the rotor currents contain scaling errors without offsets, they can be expressed as follows:

where, I is the real value of the phase current without offset and scaling errors, Ka and Kb denote the scale factor of a-, and b- phase currents, respectively.

From (21), the synchronous d-q axis ripple currents of the rotor can be derived as:

The synchronous d- and q- axis current ripples by the scaling error in the stator can be derived in (24) and (25), respectively. 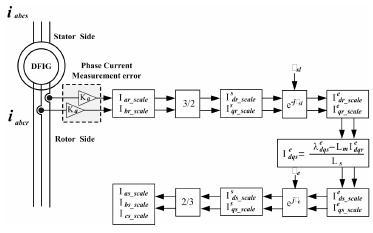 4. Detection and Compensation of Current Errors

The offset and scaling errors ( ΔIar , ΔIar , Ka – Kb) can be obtained from the selected (14) and (22) according to the specific rotor slip angle as shown in Table 2 and 3.

Due to the proportional integral (PI) current regulator of the synchronous d-and q-axis, DC components of (22) and (23) are compensated automatically, respectively. Therefore, the front sine term can be only considered regardless of the rear DC term in (22) and (23).

This compensation method using the Table 2 and 3 is very simple but difficult to bring the reliable error values due to the effects of inaccurate sampling point and the switching noise of IGBT.

However, the proposed compensation method can have high accuracy and reliability due to the use of the average values through continuous integrals.

In order to compensate the measurement errors, two parts of the integrating operation are needed. The first is the integral of detecting the offset error, and the second is detecting the scaling error.

The first parts are divided into two steps as shown in Figs. 5, and Fig. 6. The first step is the integral of the synchronous d-axis current of the rotor according to the slip angle θsl from 1/2π to 3/2π as shown in the sector I of Fig. 5. As shown in (29), the calculation makes the cancellation of the sine term of (14), and can obtain the offset-a, ΔIar .

Table 2.Detection of offset error on a specific slip angle

Table 3.Detection of scale error on a specific slip angle 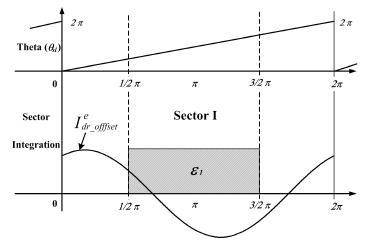 After acquiring the offset-a ( ΔIar ), the second step is the integral of the current of (14) from 0 to π according to the slip angle as shown in the sector II of Fig. 6. In this integral calculation, the cosine term of (14) is removed, and the offset-b ( ΔIbr ) can be obtained as shown in (30).

After that, the scaling error of the rotor currents can be obtained from the second part. As shown in Fig. 7, the error is acquired by integrating the current (18) from π/3 to 5π/6 as shown in (31). 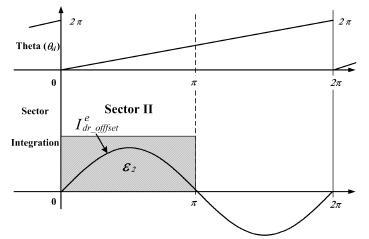 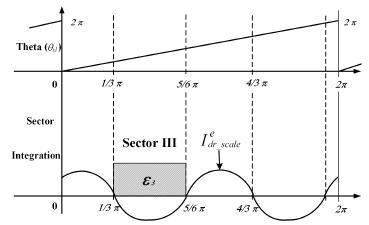 The gains (Koffset and Kscale) of the compensators can be set between 0 and 1, respectively. The smaller the gain is given, the slower the response and more accurate the compensating performance can be obtained. The final compensating equations are achieved as in (32) from the output (Offset_a, Offset_b, Scale_a,b) of the integral regulators as shown in Fig. 8. 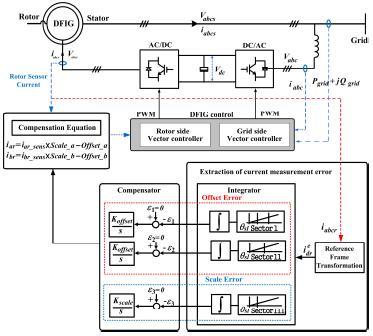 Fig. 9 shows the experimental setup. Experimental tests were performed in a 3.3-kW DFIG test rig. The DFIG is coupled to the permanent magnet synchronous motor (PMSM) of 3-kW controlled by a variable speed driver providing torque and speed regulation. The rotor of DFIG and PMSM are controlled separately by microprocessor. The switching frequency of both converters is 5 kHz. Space vector PWM is used for switching pulse generation with a sampling frequency of 10 kHz. The parameters of the experimental system are shown in Table 4.

Fig. 10 shows the stator phase currents, the synchronous d-axis rotor current and their FFT results under the following conditions; ΔIar = 0.5, ΔIbr = 0.5, Ka = 0.99, and Kb=1.05. The rotor is rotating at 50Hz and the synchronous speed of this induction generator is 60 Hz. Hence, the slip frequency is 10 Hz. Fig. 10(b) is the d-axis current of the rotor side and its FFT result. The d-axis current has one and two times ripples of the slip frequency, fsl, by the offset and scaling error, respectively. As the result, the a- and bphase current of the stator side in Fig. 10(a) have (1 – s) and (1 – 2s) times ripples of the synchronous frequency, fe, respectively as shown in Figs. 10(c) and (d). 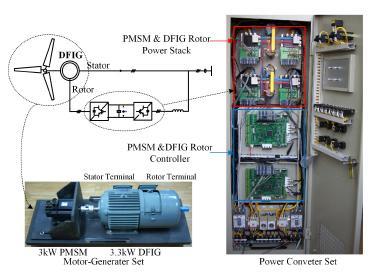 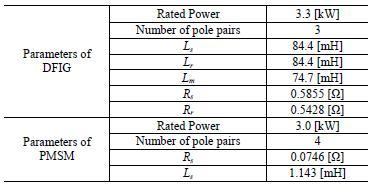 Fig. 11 shows the synchronous d-axis rotor current and its FFT result before the compensation of two errors. The experimental results were obtained under these error conditions; ΔIar = 0.1, ΔIbr = 0.3, Ka = 0.99, and Kb = 1.05. The conditions are the maximum tolerable errors of the worst case based on their datasheets of the current sensors, low pass filter, matching circuit, and A/D converter. As shown in FFT result of Fig.11, the synchronous d-axis current has one and two times of the slip frequency of the rotor. If the FFT result is compared with the previous waveform, the two times ripple by scaling error has the same amplitude and the one times ripple by the offset error is decreased due to the reduced offset.

Fig. 12 shows three output values of the compensator in the block diagram of Fig 8. At first, the offset-a and -b values are calculated by the two integrators, respectively. After that, the third integrator obtains the scaling error by integrating the two times ripple component until it is nearly zero. In this paper, Koffset = 0.1 and Kscale = 0.05 are chosen for stable and precise operation. 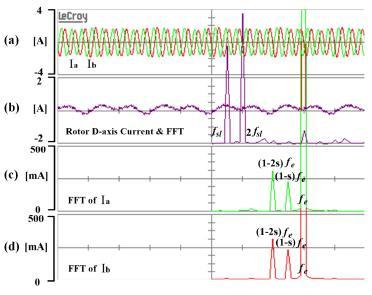 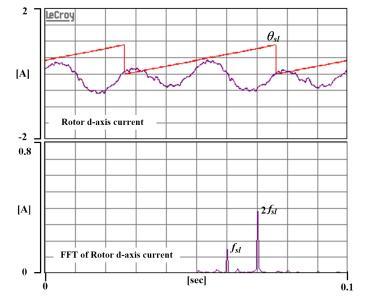 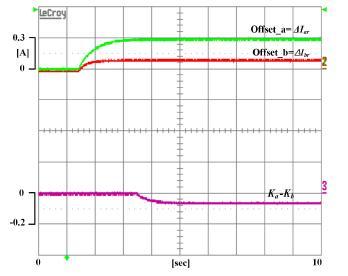 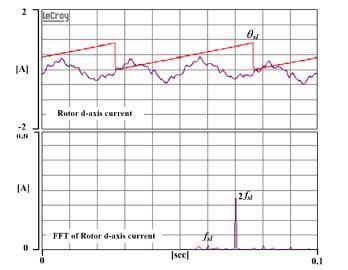 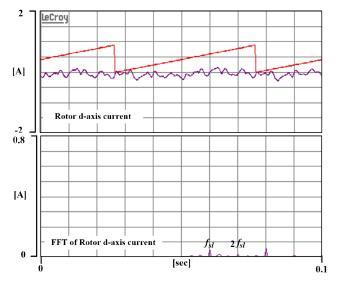 Fig. 13 shows the compensation result removed the offset error of Fig. 11. As shown in the FFT result, the ripple of the slip frequency is eliminated, and the synchronous d-axis current has only two times of the slip frequency of the rotor. Then the scaling error compensator becomes active. As the result, the ripple components by both the offset and scaling errors are nearly compensated in the synchronous d-axis current of the rotor as shown in Fig.14. Therefore, power quality is improved and the vibrations of the generator by low frequency ripples are reduced because the stator phase currents do not have the low frequency ripples by offset and scaling errors.

This paper proposed a compensation method to solve the offset and scaling problem by the measurement errors of the current sensors in a DFIG. The principal feature of the proposed method is using the synchronous d-axis current of the rotor as an input signal of the compensator. Therefore, the proposed method has the several attractive features: robustness with regard to the variation of the machine variables, application to the steady and transient states, easy implementation. The feasibility and effectiveness of the proposed compensating method were verified through experimentation.