Low frequency oscillations (LFOs) are load angle oscillations that have a frequency between 0.1-2.0 Hz. Power system stabilizers (PSSs) are very effective controllers in improvement of the damping of LFOs. PSSs are designed by linearized models of the power system. This paper presents a new model of the power system that has the advantages of the Single Machine Infinite Bus (SMIB) system and the multi machine power system. This model is named a single machine normal-bus (SMNB). The equations that describe the proposed model have been linearized and a lead PSS has been designed. Then, particle swarm optimization technique (PSO) is employed to search for optimum PSS parameters. To analysis performance of PSS that has been designed based on the proposed model, a few tests have been implemented. The results show that designed PSS has an excellent capability in enhancing extremely the dynamic stability of power systems and also maintain coordination between PSSs.

Since 1960, low frequency oscillations have been observed when large power systems are interconnected by relatively weak tie lines. These oscillations may sustain and grow to cause system separation if no adequate damping is available [1].

In order to avoid LFO, supplementary stabilizing signal have been proposed in the excitation systems through lead/lag power system stabilizers [5] or PI - PID PSSs [6]. The calculation of the parameters of these PSSs is based on the linearized model of the power system around a nominal operating point. PSSs are the most effective devices used to damp LFOs. For many years, conventional PSS (CPSS) have been widely used in the industry because of their simplicity [7].

Modern control theory has been applied to the PSS design in recent years. These include optimal control, adaptive control; variable structure control and H∞ control [8].

This section presents a brief review of the different kinds of the power system models that has been recommended for studying low frequency oscillations.

Fig. 1 shows a power system that shows the SMIB system. The infinite bus depicts the thevenin equivalent of a large interconnected power system. The nonlinear equations that describe the generator and excitation system have been represented in following equations:

The above equations can be linearized for small oscillation around an operating condition [9-11] and be cast in the block diagram shown in Fig. 2. The linearized model of the power system as shown in Fig. 1 is given as follows: 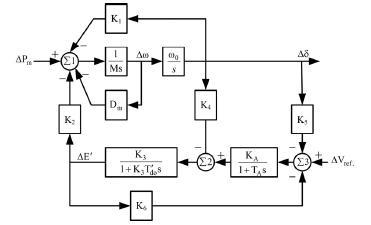 Reference [11] used linearized model of the SMIB for every machine in the power system and has been proposed a new model that is called the multi-machine power system. Block diagram of this model is shown in Fig. 3. 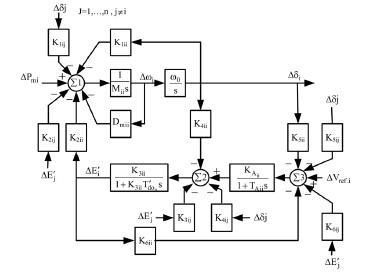 3. Power System Stabilizers and Reasons for Loss of Their Coordination

Low frequency oscillations are one of the undesirable phenomena in the power systems. This phenomenon occurs when an electromechanical mode of generators is excited. In the power systems, switching, inserting loads and so on lead to excite this mode. Practically, prevention of an electromechanical mode of generators is impossible, but there is only one way to deal with it, which is increasing the low frequency oscillations damping. For achieving to this aim, It is sufficient to add De ( De > 0 ) in parallel with Dm (Fig. 4). From a practical point of view, added this block means supplying a torque opposite direction of angular velocity variation that this act is done by PSSs. The basic function of PSS is added to damp the generator rotor oscillations by controlling its excitation by using auxiliary stabilizing signal(s). 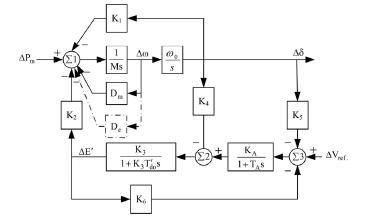 Fig. 4.Block diagram of linearized model of the SMIB system along with ideal PSS. 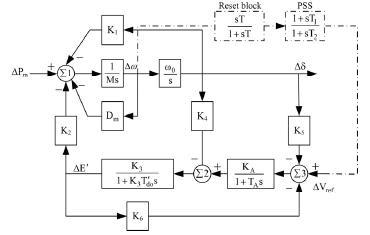 Fig. 5.Block diagram of linearized model of the SMIB bus along with CPSS.

• If Power system be too small, an infinite bus cannot be substituted instead of the rest of the power system. Also for modeling the infinite bus instead of the rest of the power system (if be small) needs to have much time and many calculations.• In this model, an inter-area mode oscillation that is between two interconnected areas is not considered.• In this model, designer can see only one electromechanical mode and try to damp the oscillations that are produced by this mode. For this reason, in designing of CPSS, our attention is only to damp one frequency. But,• This model is simple and several dynamic phenomena can be seen by it.• This model brings good ideas in mind for designing PSSs. However, for the sake of disadvantages that mentioned earlier designing PSS based on this model lead to lack of coordination between PSSs. 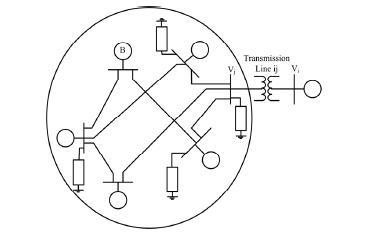 As we know, there are different frequency modes in the power system. If any of these is excited, it will produce low frequency oscillations. Hence, when PSSs are designed, it is essential to be considered all the frequency modes. Accordingly, the SMIB system is not a good model for designing PSSs. However, in the multi machine power system, the power system is modeled completely and has not disadvantages of infinite bus. Although using of this model is very complex and is not recommended. As mentioned above, two models that have been described are unsuitable models for designing of PSSs. Therefore, we need a new model for this work. So, a new model which has not disadvantages of the SMIB system and the multi machine power system has been proposed and simulated. This model is a single machine normal bus (SMNB) system.

To have a precise and complete model of the power system, it is essential that all the power systems are modeled (such as the multi machine power system) or the effects of the rest of the power systems that in the SMIB system are not modeled, via one or several inputs are modeled. Consider the multi machines power system, as shown in Fig. 3, the effects of different generators on the ith generator are applied via K1ij to K6ij (i ≠ j) , but as shown in Fig. 6 all influences and counteractions transmit to the ith generator via transmission line ij that has been attached to the power grid. It means that these effects can be considered with adding them to the bus j which is the front of the ith generator. Therefore, the effects of the rest of the power system can be modeled by measuring variables of the transmission ij line such as active currents and reactive currents or active powers and reactive powers or magnitude and angle (θj ) of voltage (Vj ) of the bus j. In the SMIB system, the magnitude and the angle of the infinite bus voltage is assumed constant. But from a practical point of view, the magnitude and the angle of the bus voltage which has been connected to the ith generator by transmission lines is oscillating for the impacts of power system oscillations. Thus, if in the SMIB system changes of these two variables are considered yields the SMNB system so that any effects of generators are not neglected. Consider the ith generator that shown in Fig. 6. Axis d of this model is 90 degree lag from its q axis. Relation between fi and its components in q and d axes are as following:

Also if Eqs. (10-12) are linearized around a certain operating point result:

Therefore, if Eqs. (10-12) are entered into Eqs. (1-4) and then obtained equations are linearized, block diagram of the SMNB is acquired (Fig. 8). Comparison between Figs. 2 and 9 approve that ΔVj and Δθj are substituted instead of the rest of the power system which is not modeled in the SMIB system. It means that any kinds of oscillations with different frequencies can be applied with these inputs and then PSSs can be designed with considering the rest of the power system. 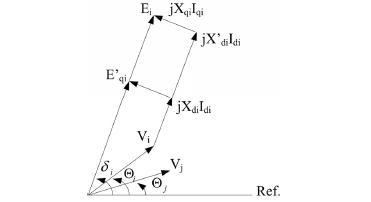 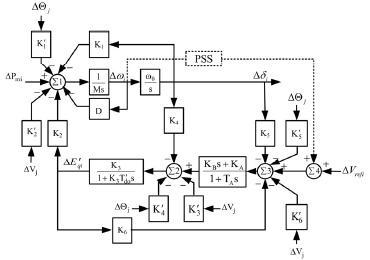 • The advantages of this model are:• This model is as simple as the SMIB system.• The effects of other generators have been considered on the ith generator and has not been neglected any parts of the power system.• In this model, the calculation of the constants such as K1 to K6 and to are very easy and can be calculated simultaneously without any estimations.• Finally in this model, there is not the first disadvantage of the SMIB system.

5. The Calculation of the Constants of the SMNB System

To separate the real and the image parts of Eq. (12) for Vi yields:

After proposing a new model of the power system for studying low frequency oscillations, it is time that a PSS is designed. Thus a synchronous machine with an IEEE type 2 static AVR system (AVR-ST2) (Fig. 9 and Table 1) connected to a normal bus through a transmission line has been selected to illustrate the deviation of simplified linear models of the power system for dynamic stability analysis. The excitation system that is used for designing of PSS in linearized model of power system (SMNB), a second separated mode IEEE type 2 static (ST2) excitation system [13 14] (Table 2 and Fig. 8) is used. As shown in Fig. 10, the model consists of a generator supplying bulk power to a normal bus through a transmission line, with a PSS. The linearized model of the SMNB system that has been linearized around the certain operating point is given as follows: 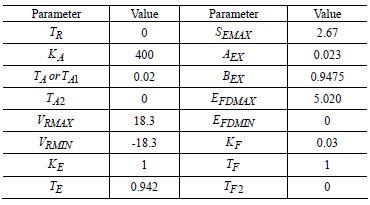 The objective function that has been used in this paper is demonstrated in Eq. (41). This robust controller can be obtained by solving Eq. (41). Where J1 = dω , J2 = dvi and γ = tsim which tsim is simulation time, dω is the angular velocity deviation, α and β are weighting parameters that in this case α is 10 and β is 1 and dvi is the terminal voltage deviation of the ith generator. Therefore, the design problem can be formulated as the following optimization problem (Fig. 11): 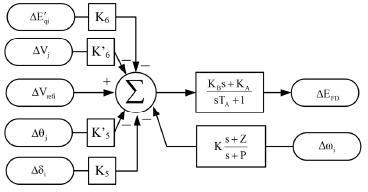 The particle swarm optimization (PSO) algorithm was first proposed by Kennedy and Eberhart [17]. Where is a novel evolutionary algorithm paradigm which imitates the movement of birds flocking or fish schooling looking for food. Each particle has a position and a velocity, representing the solution to the optimization problem and the search direction in the search space. The particle adjusts the velocity and position according to the best experiences which are called the pbest found by itself and gbest found by all its neighbors. In PSO algorithms each particle moves with an adaptable velocity within the regions of decision space and retains a memory of the best position it ever encountered. The best position ever attained by each particle of the swarm is communicated to all other particles. The updating equations of the velocity and position are given as follows [17].

Where v is the velocity and x is the position of each particle. c1 and c2 are positive constants referred to as acceleration constants and must be c1 + c2 ≤ 4 , usually c1 = c2 = 2. r1 and r2 are random numbers between 0 and 1, w is the inertia weight, p refers to the best position found by the particle and pg refers to the best position found by its neighbors. The flowchart of PSO algorithm is shown in Fig. 12. 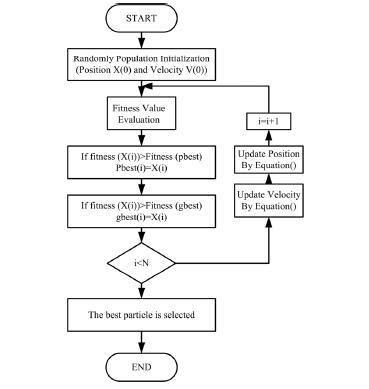 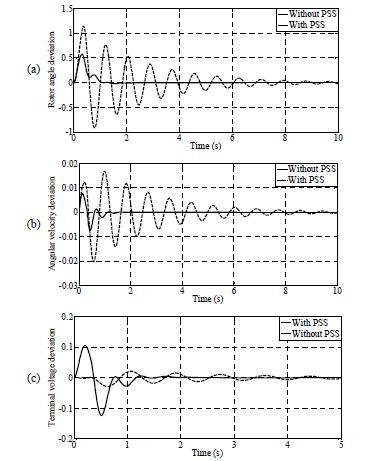 Table 4.The values of Constants K1 to K6 and K′1 to K′6 according to operating points 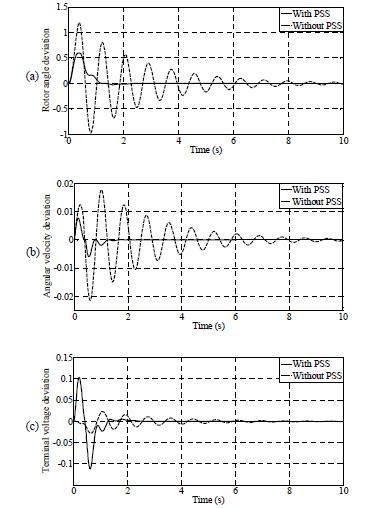 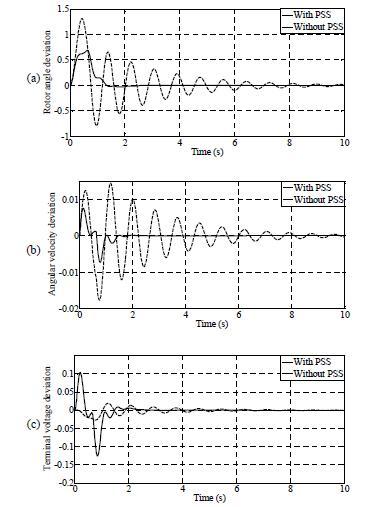 This paper investigates the stability enhancement problem of the power system in order to maintaining coordination between PSSs via proposing a new model of the power system. A lead PSS has been used for analyzing this model. PSO was employed to search for optimal PSS parameters. This new model is called the single machine normal bus system. Furthermore this model improves performance of the SMIB system and the multi machine power system by regarding the rest of the power system and making simplicity respectively. The effectiveness of. the proposed model and lead PSS have been illustrated under different tests. The results show that designed PSS based on the proposed model achieve good robust performance, provide superior coordination between PSSs in comparison with SMIB model and enhance greatly the dynamic stability of the power systems. 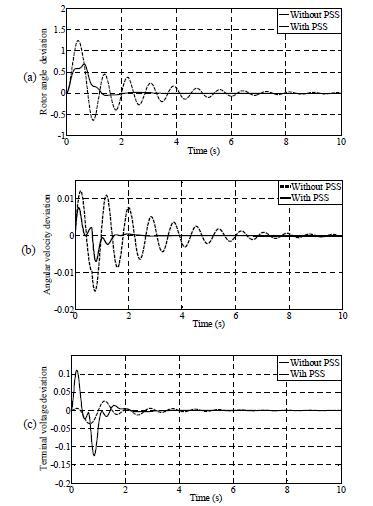