Darapladib Binds to Lipoprotein-Associated Phospholipase A2 with Meaningful Interactions

Lipoprotein-associated phospholipase A2 (Lp-) is a crucial enzyme in atherosclerosis as a potential drug target. The most remarkable Lp- inhibitory drug is Darapladib. We determined the binding pose of Darapladib to Lp- through docking study. Darapladib formed two hydrogen bonding interactions with the side chain of Tyr160 and Gln352 and several pi-pi interactions with aromatic and aliphatic hydrophobic residues of Lp-. It is known that the dietylpropan-amine moiety of Darapladib has influence on the improvement of its oral bioavailability and we supposed this in our docking results.

The phospholipase A2 (PLA2) superfamily are described by their ability to hydrolyze fatty acids and generate multiple kinds of bioactive lipids.1-3 The five main families of phospholipases have been defined of their physiological roles. Among the families, the two families of PLA2, secretory PLA2 (sPLA2) and lipoprotein-associated PLA2 (Lp-PLA2), have been evaluated and regarded as biomarkers of cardiovascular related diseases.1-3

Lp-PLA2 is also known as platelet-activating factor acetylhydrolase (PAF-AH) which is a crucial enzyme in atherosclerosis.4,5 It is generally known to catalyze the hydrolysis of oxidized low density lipoproteins (LDLs) and it is the reason why Lp-PLA2 is considered as a marker for cardiovascular diseases.2,6 After LDL oxidation, Lp-PLA2 generates two fatty acid related products; oxidized nonesterified fatty acids and lysophosphatidylcholine.7,8 Both of them have proapoptotic and proinflammatory activities and recruit macrophages for the development of atherosclerotic plaques.9,10 In human plasma, Lp-PLA2 binds to LDL and its activity is upregulated in atherosclerotic lesions. Therefore, the selective inhibition of Lp-PLA2 reduces the proinflammatory and cytotoxic effects prompted by the oxidized LDL.7-10 Consequently, Lp-PLA2 is suitable for a new potential drug target of atherosclerosis, with this authority encouraged by the phase III development of Darapladib which is the most remarkable inhibitor of Lp-PLA2.9,10

Darapladib is a pyrimidine Lp-PLA2 inhibitor developed by GlaxoSmithKline (GSK) healthcare.11-14 It is selective to Lp-PLA2 with the IC50 value of 0.25 nM. This suggests a new class of therapeutic agents targeting inflammation to treat the emerged atherosclerosis.14 The most recent research of Lp-PLA2 inhibitor design has been reported a series of Darapladib derivatives.

Even though Darapladib is a significant drug as an inhibitor of Lp-PLA2, the specific binding or interaction model with its receptor is still not proven. In this docking study, we proposed the binding pose of Darapladib to Lp-PLA2, and investigated the molecular basis of its action depending on the receptor-inhibitor interactions. This study will furnish us with valuable information to design novel and potent Lp-PLA2 inhibitors.

Docking Study. The docking study was performed to determine the docking model between Lp-PLA2 and inhibitors by the automated docking method. Based on the X-ray complex structure of Lp-PLA2 and its substrate (3D59.pdb), we defined the active site and considered the receptor-inhibitor interactions. Computational processes were performed using PharosDre@ms2.3.(EQUIS&ZAROO, Sungnam, Korea, 2012; Software available at http://www.pharosdreams.com) platform.15-17 The docking results are reported energy as score. It means that the higher score indicates the more favorable docking model. This energy score includes the receptor-ligand interaction energy and the internal ligand strain energy.18

Analysis of X-ray Complex Structures of Human Lp-PLA2. The 3D apo-form and complex structures of Lp-PLA2 with its small substrate are proven by X-ray crystallography in Protein Data Bank (PDB, www.rcsb.org).19,20 The Lp-PLA2 is a 45 kDa protein with 441 amino acids and this enzyme may act by monomer.20 The general PLA2 and related lipoproteins are composed of the larger N-terminal region containing the lipolytic active site, and of the smaller C-terminal domain. While the N-terminal region of Lp- PLA2 has a classical α/β-hydrolase fold, the C-terminal domain has a β-sandwich fold that looks like an elongated cylinder hole because the substrates of Lp-PLA2 are mostly lipid or lipoproteins (Figure 1(a)). 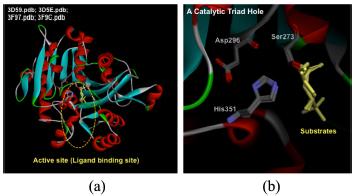 Figure 1.The 3D structure of Lp-PLA2. (a) Superimposed X-ray crystallography structures of Lp-PLA2 from PDB site (b) The active site residues of Lp-PLA2.

The structural perturbation of active site between the apoand substrate binding form of Lp-PLA2 makes no difference as shown in Figure 1(b). The active site of Lp-PLA2 contains a catalytic triad hole which is composed of Ser273, Asp296 and His351. The oxyanion hole of triad is formed by internal hydrogen bonding interactions with the amide nitrogen of Phe274 and Leu153. In the substrate binding structure, Ser273 formed a covalent bond with oxygen atom of the substrate because this serine residue plays a role as a nucleophile for the esterolysis SN2 reaction. Around the catalytic triad hole, various hydrophobic residues are located and they form several internal pi-pi interactions with each other.

Predicted Docking Model between Lp-PLA2 and Darapladib. Darapladib is a drug with Lp-PLA2 inhibitory activity as developed in Feb, 2012.11-14 To understand the inhibitory mechanism of Darapladib against Lp-PLA2, the binding pose has to be determined by a docking study.

Darapladib inhibits the phospholipase activity of Lp-PLA2 and shows good enzyme selectivity towards Lp-PLA2. When it was evaluated for its enzyme selectivity towards other phospholipase A2 proteins such as the family of soluble PLA2 (sPLA2), Darapladib validated minimal inhibition of human sPLA2-IIa (0%), sPLA2-V (0%) and sPLA2-X (8.7 %).21,22 The plasma activity of Lp-PLA2 is reduced in hyperlipidemic rabbits by oral administration of Darapladib. This effect was maintained at ＞60% inhibition for 24 h and atherosclerotic plaques are also reduced.21 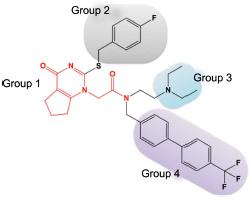 It is divided into four functional moieties of cyclopenta-pyrimidine ring moiety (Group 1), fluorobenzyl sulfane group (Group 2), dietylpropan-amine group (Group 3), and trifluoromethyl-biphenyl moiety (Group 4). Especially, the group 1 is the main interaction moiety in Darapladib. The 2D structure of Darapladib is presented in Figure 2.

The docking model of Darapladib to Lp-PLA2 is shown Figure 3. Overall interactions of this docking model are explained by two hydrogen bonding and two hydrophobic interactions (Figure 4). While Ser273 is important for the biological reaction between the substrate and Lp-PLA2, this residue may not form any kind of interactions with the inhibitor.19,20 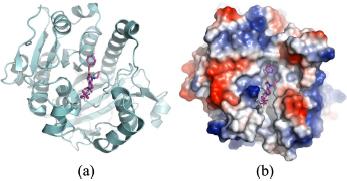 Instead of Ser273, Tyr160 and Gln352 joined the formation of hydrogen bonds with Group 1 of the inhibitor. The carbonyl oxygen of pyrimidine ring formed a hydrogen bond with the side chain of Tyr160 and another carbonyl oxygen of the acetamide moiety on Group 1 also formed a hydrogen bond with the side chain of Gln352. The two groups (Group 2 and 4) are participated in hydrophobic interactions with the receptor. In the case of group 2, the fluorobenzyl moiety is interacted with several hydrophobic residues such as Leu153, Phe274, Trp298, Phe322, and Tyr324. These are located in the vicinity of catalytic triad hole. The indole ring of Trp298 and the benzyl ring of group 2 took into the aromatic pi-pi stacking interaction. Trifluoromethyl-biphenyl moiety (Group 4) also joined another hydrophobic interaction with Phe110, Leu111, Leu369, Lys370, and Leu371. Especially, Lys370 and the trifluorophenyl ring of Group 4 formed pi-pi interaction. These hydrogen bonding and pi-pi stacking interactions can be driven factors to boost up the strong interaction between Darapladib and Lp-PLA2. 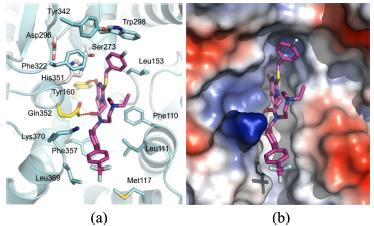 As shown in Figure 4(a), Group 3, the dietylpropan-amine moiety of Darapladib, is exposed to the surface area and has no specific interaction with the receptor. Thus it is assumed that this moiety does not contribute to the binding to the active site of Lp-PLA2. The recent structure-activity relationship (SAR) report of the derivatives of Darapladib bears out this suggestion (She, J. et al., 2013).13 According to the report, authors tried to develop the biological activity and enzyme selectivity of Darapladib analogues using various substitutions at the dietylpropan-amine site. In their conclusion, most of Darapladib derivatives substituted at the dietylpropan- amine site do not influence the enzyme activity against Lp-PLA2 but improve their oral bioavailability in human body.13

In our docking result, the docking model suggests the proper basis for these SAR experimental evidences and can provide intuition to grasp the mechanical action of Darapladib against Lp-PLA2.

Although Darapladib is a remarkable drug for Lp-PLA2, the interaction model with its receptor has not been defined until now. In this study, we performed the docking study of Darapladib to Lp-PLA2. Two hydrogen bonds and several pi-pi interactions maintained the strong binding interactions between Darapladib and Lp-PLA2. The surface exposed region of Darapladib, the dietylpropan-amine moiety (Group 2), has no specific interactions with the receptor. Therefore, we assumed that this moiety dose not contribute to the binding interactions of the inhibitor with Lp-PLA2. This assumption is confirmed by the experimental SAR study from She, J. et al. 2013. In their report, the dietylpropan-amine site is not crucial for the enzyme activity but significantly increase its oral bioavailability. In our docking study, we determined the interaction model between Darapladib and Lp-PLA2 and demonstrated the contribution of this docking model to design potential inhibitors against Lp- PLA2.