Fruit Set and Fruit Characteristics of Highbush Blueberries (Vaccinium corymbosum cvs. Bluecrop, Coville, and Northland) in an Open Field and a Rain Shelter

Yield and quality of blueberry fruit are often reduced by unfavorable environmental conditions such as high or low temperatures and flooding. Especially, heavy rains can ruin much of fruits of field-grown plants. Harvest season of many highbush blueberry cultivars in Korea is the rainy season. Rain occasionally causes to make a crack of blueberry fruits and reduce a yield and storage periods (Peet, 1992). Protecting blueberries from the heavy summer rains may enhance yield and fruit quality (Tamada and Ozeki, 2012). Consumer’s demand for fresh blueberries is increasing and commercial growers need to increase productivity to meet this demand. Some growers are interested in rain shelter to protect from severe weather conditions and early and high fruit yield with quality fruits (Tamada and Ozeki, 2006, 2009). Generally, fruits in rain shelter have early ripening characteristics which are useful for producing fruit for an early, more profitable market (Kim et al., 2011a; Tamada and Ozeki, 2012).

In the present study, highbush blueberries were grown in an open field and in a rain shelter. Fruit set and fruit characteristics of three blueberry cultivars were compared to evaluate the possible benefits of rain-sheltering systems on fruit quality and yield.

The research was conducted on 5-year-old highbush blueberry shrubs (Vaccinium corymbosum cvs. Bluecrop, Coville, and Northland) in an open field and in a rain shelter at the experimental orchard of the National Institute of Horticultural and Herbal Science, Rural Development Adminstration, Suwon (126° 58’ E, 37° 18’ N). These cultivars represent the early (‘Northland’), mid (‘Bluecrop’), and mid-late season (‘Coville’) blueberries. Therefore, these cultivars were the main cultivars in Korea.

The shrubs were spaced 1.5 × 1.5 m apart. The rain shelter protected the shrubs from rain but did not provide temperature adjustment. The shrubs were irrigated by drip irrigation system.

Flowering time of each shrubs was recorded daily from April to May during its entire flowing period. Full bloom was measured to 80% flowering time. Fruit set was expressed as the ratio of the total number of harvested fruit to the number of florets per shrubs. Ripe fruits were weekly harvested from June to July.

Berry weight, diameter, and length were measured as soon as possible after harvest. Seeds per berry were counted individually on 30 berries. Skin color of berry was expressed as L*, a*, b* with a colorimeter (CR-200, Minolta Co., Tokyo, Japan). Soluble sugar content (SSC) and titratable acidity (TA) were measured from juice extracted in thirty berries randomly selected from each cluster. The SSC of the juice was measured using a digital pocket refractometer (PAL-1, Satato, Tokyo, Japan). TA was estimated with an automatic titrator (TitroLine® easy, Schott, Germany) titrating with 0.1 N NaOH to pH 7.0 and expressed as citric acid equivalents. Fruit firmness was measured with a digital material tester with a 1 mm diameter probe (LF Plus, Lloyd Instrument Ltd., West Sussex, UK).

Statistical differences were assessed via analysis of variance with the SAS 9.2 software package (SAS Institute Inc., Cary, NC, USA). The data was employed to variance analysis and means were compared by Tukey test at 5% significance level. 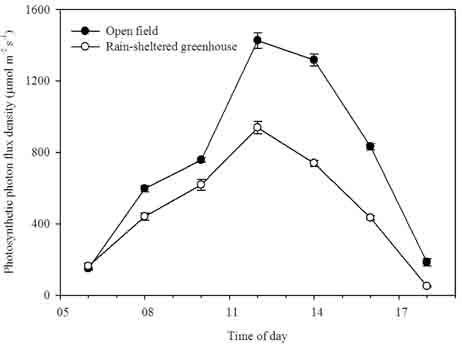 Fig. 1.Photosynthetic photon flux density in the open field and rain shelter during June and July, 2012. Vertical bars are standard errors of the means (n = 30). 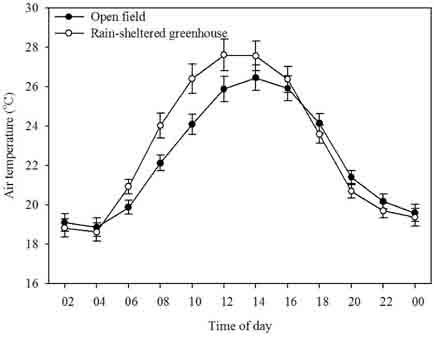 Fig. 2.Air temperature in the open field and rain shelter during June and July, 2012. Vertical bars are standard errors of the means (n = 30).

All three cultivars began flowering and reached full bloom about one week earlier in the rain shelter than in the open field (Table 1). The elevated temperature (Fig. 2) can affect the earlier flowering and subsequent fruit ripening. Most of rain-sheltering culture has reported that fruit ripened earlier in shrubs grown in an unheated greenhouse than in ones grown in an open field (Gough, 1994; Mainland, 2002; Kim et al., 2011b). The flower buds hastens flower opening (Adams et al., 2001) and the time to maturity of fruit shortened (De Koning, 1989) by higher temperature of greenhouse (Table 1).

Table 1.Flowering and fruit harvest periods of ‘Bluecrop’, ‘Coville’, and ‘Northland’ highbush blueberry cultivars grown in an open field and in a rain shelter 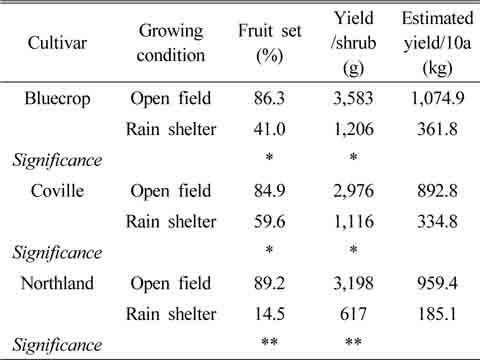 To obtain good yields from highbush blueberries, at least 80% of the florets must set fruit (Merrill, 1936), despite the fact that other fruit trees require fruit set from only 20% of the flowers (Shutak and Marucci, 1966). Although highbush blueberries are self-fertile, there is a beneficial effect of cross-pollination on fruit size and quality, as well as on yield in many cultivars (Huang et al., 1997; Ehlenfeldt, 2001). Furthermore, morphology of the flower facilitates crosspollination by bees (Ritzinger and Lyrene, 1999). The receptive surface of the stigma extends beyond the surrounding stamens and normally receives only a few pollen grains from the same flower (Brooks and Lyrene, 1998). Therefore, some cultivars do not set fruit without pollinators (Eck, 1988). Especially, berry weight is reduced without pollinators in all blueberry cultivars (Eck, 1988; Free, 1993; MacKenzie, 1997, 2009; Isaacs and Kirk, 2010). Therefore, pollinating insects play a crucial role in ensuring fruit set and quality of highbush blueberries. In open field, the natural pollination agents like insects and wind are present, but have been absent or present in reduced numbers in the rain shelter in our experiment. In the open field, ‘Northland’ may have been cross-pollinated by other early cultivars such as ‘Chippewa’ and ‘Polaris,’ but it flowered earlier in the greenhouse than ‘Coville’ and ‘Bluecrop,’ so there may have been little or no chance for cross-pollination. Especially, ‘Northland’ was developed through interspecific hybridization of lowbush and highbush blueberries (Jonhston and Moulton, 1967). Some researchers have characterized rabbiteye and lowbush blueberries as almost wholly self-incompatible (Aalders and Hall, 1961), therefore, the rain shelter in our study which was not introduced pollinators may decrease the fruit set ratio of the ‘Northland’.

‘Northland’ fruits grown in the rain shelter were larger, heavier, and had more seeds per berry than fruits grown in the open field (Table 3). The number of seeds correlated positively with berry size. Therefore, the reduced fruit set of ‘Northland’ may have increased fruit size by a fruit thinning effect. There was no clear difference in these characteristics between growing conditions for the other two cultivars.

SSC varied both with growth conditions and the cultivars. SSC of fruits was similar in ‘Coville’ under both growing conditions. Fruits of’ Bluecrop’ from rain shelter had higher SSC than those from open field, but the opposite pattern was observed for ‘Northland’. It is not clear why the SSC varied in the cultivars by the growth conditions. However, it may be related to altered light quality and light intensity in the rain shelter in comparison with the field (Baxter et al., 2005). The photosynthetic capacity by light intensity is varied among the cultivars in blueberry. Especially, photosynthesis of ‘Bluecrop’ in 30% shade condition did not decrease (Kim et al., 2011b).

TA was significantly higher in fruits from greenhousegrown shrubs of both ‘Bluecrop’ and ‘Northland’ than in fruits from open field-grown shrubs (P < 0.05), although there was no difference in TA with respect to growing conditions for ‘Coville’.

Firmness of ‘Bluecrop’, ‘Coville’, and ‘Northland’ fruits was higher in the rain shelter (2.91, 3.02, and 3.31 N, respectively) than in the open field (2.25, 2.57, and 2.70 N, respectively). Fruit firmness and maintaining it after harvest until delivery to the consumer are an important determinant for quality and for major concern to growers. Fruits harvested in the rain shelter were firmer than those in the open field. Rainfall during harvest season is especially harmful, being conditions favoring fruit cracking in cherry (Simon, 2006) and blueberry (Marshall et al., 2007). Water absorbed through the epidermis of the skin as well as from the roots contributes to splitting. Some drought-stressed rabbiteye blueberries are more likely to sustain rain-related splitting (Austin, 1994; Rooks et al., 1995). Therefore, preventing the wetness caused by rain may help to maintain the firmness of the fruit. Cultivation practices that provide shelter from rain can enhance fruit firmness and extend the storage life.

‘Coville’ and ‘Northland’ fruits harvested in the open field had higher blue chroma (i.e., more negative b*) than those harvested in the rain shelter (Table 3). However, this pattern was reversed for ‘Bluecrop’ with respect to growing conditions.

The two different growing conditions used in the present study affected many of the fruit characteristics of the cultivars differently. Therefore, suitable blueberry cultivars for the rain shelter should be chosen by purpose. However, one effect was consistent for all cultivars: protecting blueberries from rain enhanced fruit firmness. The benefits of rainsheltering cultivation may be multiple, first because harvesting of greenhouse-grown shrubs could proceed in the rain. Reducing fruit wetness may increase firmness, lengthen its storage life, and reduce diseases.

Our study also suggests some concerns with growing blueberry shrubs in a rain shelter. First, sheltering from rain affected most fruit characteristics of highbush blueberry cultivars differently. Therefore, suitable blueberry cultivars for the rain-sheltering cultivation should be chosen by purpose. Secondly, the benefits of cross-pollination may be reduced under shelter, requiring the introduction of pollination agents such as honey bees. Another concern is light reduction. The number of florets per flower bud and fruit set significantly decreased with increasing shade level (Kim et al., 2011b). Consequently, the type of greenhouse will be selected to maximize light capture, and should be modified to reduce shade problem while providing shelter from heavy rains. Such modifications have been successful in the cultivation of grapes (Ahn et al., 2012). Accordingly, roof-type rain-sheltering system might be introduced in blueberry cultivation.